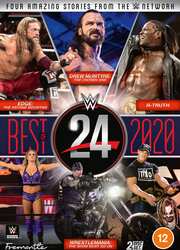 Bringing together four of the WWE Network’s documentaries this is a fantastic set for those who have enjoyed the surreal nature of WWE the past year will really appreciate just how much the company does to give us the entertainment it provides.

R-Truth is a performer who it feels has been around for decades and the jokes regarding his inability to age are almost not funny when you consider just how good he still looks at his age (48).

This documentary looks at his career and thankfully it does not sugarcoat anything. He talks about how he tried to make it in the music business, but as this was not paying had to make money selling drugs which saw him jailed many times. On one of these occasions he encountered Jack Crockett who was part of the WCW family and it was this meeting which saved him from continuing down that dark road.

We see R-Truth in the indy scene, in NWA Wildside and his debut in the WWE as K-Kwik. Following being fired he went to TNA were he became the first black NWA Champion which even he cannot believe he was given the chance to do. This wasn’t a publicity stunt; this was a man who truly deserved to be at the top of the business calling himself Ron ‘The Truth’ Killings.

Finally, he came back to the WWE as R-Truth and went from strength to strength, feuding with the likes of John Cena, the evolution of ‘Little Jimmy’ and his many wonderful and often hilarious performances with the 24/7 Title. He is clearly a loved superstar by everyone and though he may never be in that main event picture again, he should be proud of everything he has and continues to achieve.

In 2011 when Edge retired it seemed like he would never step foot in the ring again. I was glad that he walked away while he still could and ended his career on a high, rather than a broken down version of himself. During his time away he has raised a family, went into acting and had a few WWE appearances here and there, but never in the ring. This seemed like a retirement that was legitimate.

Then in 2020 the buzzer of the Royal Rumble went and we heard the iconic ‘You think you know me!’ Edge was back.

This documentary shows how he prepared for this moment and it was so nice to see Edge at home, training, preparing with his wife, former WWE Divas Champion Beth Phoenix. It is clear that he wants to return because he loves the business and it is not just because of money or desire for fame, but because he loves wrestling. Seeing him prepare on the day and other superstars reacting to seeing him was perfect and the pop he got from the crowd was amazing.

This return should have been like the HBK return of 2002, but instead a few months later he would be retiring due to injury again.

Wrestlemania: The Show Must Go On

The Covid-19 pandemic’s effect on the world and the staging of the event is quite interesting and it seems as though there were even moments when it may not have taken place at all.

However, WWE being the company that they are decided that the show must go on and behind closed doors at the Performance Centre. The staff talk about how they had to adapt the staging they had prepared for the Tampa Arena and this caused many issues, resulting in it being filmed in multiple locations and shown over two nights.

Drew McIntyre’s rise is shown with it being over a decade since he was declared ‘The Chosen One’ and how it didn’t happen right away. There is a quick look at his career through to the NXT and return to the main roster and win at the Royal Rumble to face Brock Lesnar. This would be the first time a British person has been in the main event at Wrestlemania and it was just sad that instead of being in front of 70,000 people it would be in front of no one.

John Cena’s match against Bray Wyatt’s The Fiend is quickly shown, as is Edge’s return, the use of Rob Gronkowski and the sight of Vince McMahon showing him how to perform a fall is insane. Braun Strowman’s push into the title picture against Goldberg. Strowman talks about how him being bullied led to him training and becoming the Monster he is today. Kevin Owens goes through his match against Seth Rollins and how he wanted the match to go.

This was an interesting documentary, though it did feel as though they could have made an hour about every single part they focused on. If you haven’t seen the PPV then it also had a quick overview of each match and their highspots which was great. I believe the main point of the documentary was to show that WWE can overcome any problems and put on a show that people will enjoy.

Drew McIntyre: The Chosen One

2020 was the year of Drew McIntyre. After nearly a decade of ‘Almost’ he finally rose to the top of the mountain. This documentary looks at how he went from being declared ‘The Chosen One’ by Mr McMahon to being somewhat of a joke with the Three Man Band and ultimately being released.

It was fascinating to see how he learnt the business, including taking some lessons by Jake ‘The Snake’ Roberts. As he developed he would be put up against any veterans and rose up the ranks in the British wrestling scene. Getting to the WWE, he developed in OVW and FCW and quickly was brought up to the main roster and was almost pushed to the moon straight away, put over by Mr McMahon as ‘The Chosen One’, winning the Intercontinental Championship, but then his career started to unravel and go down. His divorce and death of his mother devastated him (understandably) and it is heartbreaking to see how he changed and almost lost his love for the business and this lead to his release.

He went back to the indy scene to ICW which looked amazing. This development really helped his career get back on the tracks. He won many titles during this time and he had a huge impact on many independent companies. They oddly do not show his rise in TNA and jump straight to his return to NXT and his rise again to the NXT title and to the main roster. Once again his rise seemed to falter which was odd considering his initial push.

However, his win at the Royal Rumble gave him the opportunity he has been fighting for all this time and lead to his wonderful win at Wrestlemania. Watching this was nice to see someone go from rags to riches to rags and back to riches and looking at what he went through you can say he utterly deserved it.

The two disks come with four extra matches. Considering how much they talk about how great his match against John Cena was, it is a shame that the match included for R-Truth was a random one from Smackdown against Shinsuke Nakamura. The match itself is less than a few minutes long and I think I would have preferred a montage of his many 24/7 Title wins.

Three matches from Wrestlemania 36 are included Edge vs. Orton, Rhea Ripley vs. Charlotte Flair and Brock Lesnar vs. Drew McIntyre. I was surprised they included so much as these are all great matches though I feel the Edge/Orton match went a bit too far and I would have preferred his entrance and performance in the Royal Rumble. Ripley against Charlotte was great and Lesnar against McIntyre had so much electricity surrounding it that you can’t watch it without feeling happy.

This is possibly one of the best sets I have seen in a while. All four documentaries were hugely enjoyable and watchable, now as to whether I would watch them again is debatable, but they are definitely ones I would recommend watching. The extra matches are a nice added touch and so if you didn’t buy Wrestlemania 36 you will be able to experience some of the best matches and moments from that.