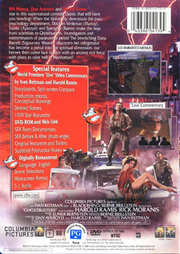 Back Cover of Ghostbusters: Collector`s Edition 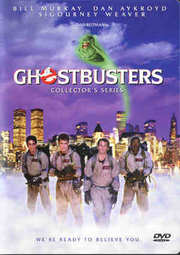 Synopsis:
Three university paranormal student outcasts decide to setup business on their own fighting ghosts, meanwhile Dana Barrett discovers her refrigerator is a portal to another dimension, and spooky activity in the city is growing at an alarming rate. The reason for this soon becomes clear, and the Ghostbusters suddenly find themselves having to save New York.

What i think about ghostbusters
It was the year 1984 when ghostbusters was released, but i was too young to see it in cinema.so i saw it first time on the vhs video when i was about 4-5 years old and the year was something like 1986.if i don`t remember wrong it was the first movie that i ever see and the other was e.t (also tootsie and star wars was seen on that time).i can still remember by sitting on the floor with my friends and staring the scary ghostbusters (it was actually very scary on that time, specially that library scene).it was so legendary time.ghostbusters movie is one of my alltime favourite movies and it was the beginning to the world of movies and special effects.sometimes i forget these legendary feelings, but now as we live on the 21st century (which means me the time to go back to the past) the ghostbusters still feels great and wonderful movie.ghostbusters is very unic film and there`s no other samekind of movie, except the ghostbusters 2, which is also very good.the cast of ghostbusters is absolutelly great and they all got their own styles.if i had to choose my favourite ghostbuster it would be raymond stantz the legendary dan aykroyd.all his funny looks and sounds makes him the best and funniest ghostbusters.including the actors the one of the most important thing in this movie is the special effects.they must have been a big breaktrought in early 80`s, because they look so cool even now.even ivan reitman isn`t so very happy to some special effects i still respect the way special effects are presented.i don`t like the new computer effects (like the phantom menace), because they look too over effected and there is not used as much muppets as in the old movies.after all ghostbusters is fantastic movie with comedy, great actors, special effects and also very great music.the most coolest songs are ray parker jr`s theme, alessi`s savin` the day and mick smiley`s magic.all these elements made the ghostbusters one of the greatest legends ever.

The transfer
If you are a ghostbusters fan and you own dvd videos, you just gotta have this dvd even what would happend.this is the most greatest dvd i have ever seen.the audio is dolby digital 5.1 and germany dolby surround 2.0 for the deutch people.the sounds are very clear and you can finally hear the music well enough.there`s only a little mistake in sound and it happens during the video commentary making a "ckrzz" kind of sound.in the movie there`s nothing wrong and the sounds and music are wonderful.what about the video?you can choose 2.35:i or 16:9 widescreen and i can tell you that it`s just absolutelly great and clear with millions of colors.there`s nothing else wrong except when marshmallowman explodes and makes a little stop in the picture.if i would be very hard judge i would give other minus for the pixels of yellow mouse movements on the menus.it`s also a very little damage, but because these things i cannot give full points for video.now to the extras and they are the fruit of this dvd.as you but the ghostbusters dvd inside and push play the columbia logo appears and great menus appears.new york city with moving interactive things like cars, ghosts, marsmallowman and many others.there`s also ray parker jr`s theme playing in menu and it feels very cool.if you have enough good speakers on compurter or stereos on tv you can hear flying ghosts going from left to center and right.very great menus, but that`s not all.menus actually includes lots of extras like interesting video commentary by reitman, ramis and brillstein which gives you lots of new information about the movie.i really enjoyed the video commentary and it was even better than in the john carpenter`s thing.many deleted scenes, trailers, making documents, drawings, pictures, sfx before & after where you can change the angle.storyboards, moving chapter selections icluding thunder sounds, web link supports and everything cool in spook central.spook central has got it`s own cool music and lightnings.this is just unbeliveable dvd and everybody`s should have to experience this enjoyable magic feeling.
posted by Hamill82 on 29/12/2000 14:13