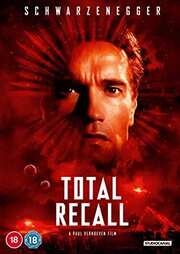 Doug Quaid suffers from vivid dreams of travelling to Mars and encountering a beautiful woman, who is not his wife. On Mars the colonies are in the middle of a revolution against Governor Cohagen. Instead of travelling to Mars, Quaid decides to opt for a trip with a company called Rekall. Rekall implants false memories of a trip to Mars, but in doing so it brings back memories for Quaid of when he actually was on Mars as a spy.
Quaid must now figure out what is real, who he can trust and most importantly he needs to 'Get his ass to Mars!' in doing so he finds out that he isn't who he thinks he is and that he may be the only hope for those who live on Mars.

I love Total Recall and I was so happy to relive my memories of this wonderful, over the top, action movie. Written by Ronald Schusset and Dan O'Bannon (with Gary Goldman), who had created Alien, and Directed by Paul Verhoeven, hot on the heels of his wonderful helming of Robocop and starring Arnold Schwarzenegger, this is a film that is almost everything that an action film of this period needed to be.

The plot of the film is just perfect and the acting by everyone is just as good as it could be. Arnold will never win an Oscar, but his performance is exactly what the film needed. However, it is the performances by the likes of Michael Ironisde as Richter, Ronny Cox as Cohagen and Sharon Stone as his 'wife' Lori make up such a great ensemble for him to work with.

If you have not seen the film I don't want to spoil anything, but this film is filled with amazing set pieces and wonderful make-up effects. The music by Jerry Goldsmith is fantastic and I was surprised by how much I enjoyed it and how effective it is.

Now, I will say that the effects have not held up well, but in some ways that only adds to the charm of the film. Yes, they could have gone back and CGI'd all the scenes where they used a robot Arnold, but the fact they haven't shows that they are proud of what they achieved and so they should be with their work being awarded a Special Oscar. The X-Ray scene is still as impressive now as it was back then. The miniatures and matte painting work is just phenomenal and it is so surprising when you realise just how little CGI (if any) was used in the making of this film.

Over two disks there are a number of extra features, however not as many as I thought there would be. With so many editions of this film being released over the years on DVD/Bluray etc. it would have been nice to have brought all of that together for one definitive release. However, what we do get is great.

A Commentary with Paul Verhoeven and Arnold Schwarzenegger is really enjoyable as you can tell that both enjoyed making and also watching the film. This is one of those commentaries that you can watch without worrying about dead silence and both have a lot to say about the making of the movie.

Open Your Mind: Scoring Total Recall is an assessment of Jerry Goldsmith's work and I must say it is a fantastic score that does not just delve into the tropes of science-fiction and upon reflection adds a lot more to the film than I thought. Imagining Total Recall and Making of Documentary cover more or less the same things looking at how the film was made and the second one is an archive one from when it was made.

Models and Skeletons: The Special Effects of Total Recall should be the prize of this set, instead it is so boring. I found myself just wanting them to get on with it and show me the ins and outs and not just talk and I was very restless watching this, which is a real shame.

Total Excess: How Carolco Changed Hollywood is a bizarre documentary charting the rise and fall of Carolco. This studio brought (to name just a few) the Rambo films, Basic Instinct, Terminator 2: Judgment Day, Cliffhanger and Showgirls. It seems insane to say that a studio which made one of the biggest and most beloved science-fiction action films of all time in Terminator 2 in 1991 could in four years time be declaring itself bankrupt. It shows how the company worked, throwing millions at projects and in some cases making it back and then some, but then when they failed, they failed hard and this all ended with the monumental double-punch failure of Showgirls and Cutthroat Island.

This was an interesting documentary, but it does beg the question as to why it was included here. As Studiocanal own all (or most) of the Carolco catalogue, there is no reason why they couldn't have stretched this a little longer and made it its own documentary like The Go-Go Boys: The Inside Story of Cannon Films and Electric Boogalo: The Wild, Untold Story of Cannon Films which saw the same scenario. It is a shame as unless they release it with a few different genre films, if you are not a fan of the film or Science-Fiction, you might never see this great documentary.

Total Recall is a wonderful film. It is such a time capsule of how films were made during the 1980s early 90s. However, unlike many who upon reflection have become a joke, this film still holds up as a very clever, action-packed, funny and enjoyable film that will forever live on in my memory and hopefully it is real and not just an implant by Rekall.