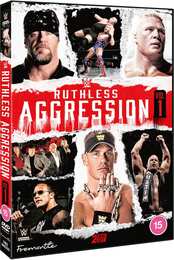 In 2001 WWE won the wrestling war, defeating and buying both WCW and ECW they reigned on top of the wrestling mountain. However, as JR would always say 'If you don't have a second horse you have no horse race' and WWE soon found the main problem with having no competition is that they no longer had any reason to take any chances or doing anything new. This lead to a decision to deliver a shot of adrenaline into the WWE and that was 'Ruthless Aggression'.

This new documentary series looks at the development of this and much like The Monday Night Wars series, has an episode focusing on one element, person or theme. The five episodes, all around an hour focus on the following subjects: Ruthless Aggression Origin, John Cena, Evolution, Brock Lesnar and the Raw/Smackdown Brand Split.

I would be lying if I say that these five episodes are as good as the excellent Monday Night War series and maybe because it feels a little incomplete and rushed. What I loved about the Monday Night War series was it was created almost for the non-fan who didn't know anything, but this one felt like it was designed for the fan who knows most of the story anyway. These five episodes could have stretched to ten episodes and more and it just felt that they were rushing for some reason and it suffers because of it.

The first episode 'It's Time to Shake Things Up' looks at the aftermath of WWE winning the wrestling war, the awful Invasion (which I am glad they agreed was awful) and how WWE went from being edgy and full of 'Attitude' to almost a pale imitation of this. The loss of The Rock to Hollywood and Stone Cold to injury also meant that they had to do something to dig themselves out of the creative rut they were in.

This episode is fine in general, but you could have done one episode just on the failed Invasion and what happened with that. I wanted to know more about why certain people didn't come over and also what their thoughts were when they eventually did come over. Looking at the awful creative decisions could have also been its own episode looking at some of the terrible things that WWE would do which would often win the Wrestlecrap Gooker for Worst in Wrestling (e.g. Katie Vick, Al Wilson), but they just seemed to brush over this.

The second episode 'Enter John Cena' looks at possibly the face of this era with Cena's debut declaring he had 'Ruthless Aggression' facing off against Kurt Angle and despite how infamous this moment has become (mocked at this year's Wrestlemania) ultimately it was a failure. This is something that is acknowledged by Cena himself and it wasn't until he became the Doctor of Thuganomics when John Cena became the star that we now know him as.

I enjoyed this episode and I just hope that there is more in regards to looking at Cena as his contributions during this time really cannot be underestimated and it could be argued that he is the Austin/Rock of this generation.

The third episode 'Evolution' looks at how Triple H brought together the team of Ric Flair, Batista and Randy Orton to become the new 'Four Horseman'. We get to see how Flair had lost his confidence and Triple H helped him regain this as well as scouting for two up and comers to develop.

My only real issue with this episode is that it really could be three episodes. Both Batista and Randy Orton have had such amazing careers that they deserved episodes each and so it felt as though this was again rushed. I did like the revelation that for a time Mark Jindrak was considered instead of Batista. Looking back, I could almost understand it due to his look, but seeing how he was backstage I can understand why Triple H was dead against it.

The fourth episode 'The Next Big Thing' looked at the immense impact of Brock Lesnar and just how massive he became in two years. I was stunned by this episode and it was fascinating to see how quickly he developed and rose to the main event. Of the episodes, this is one that I don't have any issue with as it was very focused and able to explain why he was so important.

Finally, the fifth episode 'Civil War: Raw vs. Smackdown' showed how in order to develop competition the company divided the roster having a 'Brand Split' and this meant that both of these shows had their own roster of champions and stars. This was initially a way to develop stars and also to help lighten the load of the touring schedule.

At first it was seen as a mix of negative and positives, splitting teams like The Dudley Boyz and APA was a ridiculous idea, but overall pitting the two brands against each other helped fill the competiton vaccum that was left by the closing of WCW. It was great seeing how both would boast over ticket and PPV business and how Smackdown (who was always seen as the B-Show) at times blew Raw out of the water.

This episode covered all the points, but I did feel that they again were rushing through this and it would have been great to have looked more indepth into how this effected the business and also who did this help or hinder.

One of the things that really shocked me about this set was the lack of extras. Included is the original 'Ruthless Aggression' promo from Vince McMahon which I understand, but it was featured so prominently in the first episode that it seemed a bit unneccessary. Two Deleted moments from the Evolution episode are fine, with a great look at how Evolution members had developed at Wrestlemania 21. Three trailers (two for this season and one promoting the next one) are the only other extras and I am shocked that nothing else is given. There were so many moments and matches I wanted to relive and cannot believe that nothing else is given.

Ruthless Aggression Volume 1 is an odd set. It feels like until the whole series has been seen I cannot really say whether has been thorough enough on some of the subjects. These five episodes are fine as an overview of the subjects covered, but it feels like these only just scratch the surface and a lot more could have been done. That being said, I did enjoy watching them and if you want a quick look at this era and the people who made it what it was this is a set that wrestling fans will enjoy.