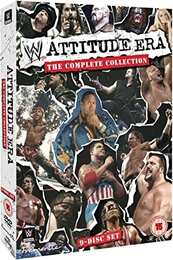 There is no doubt that WWE is the biggest wrestling company in the world, but by 1996 a shift had happened, people were watching WCW or not watching wrestling at all. Something had to change and a change happened... a change in attitude which brought the WWE soaring to new heights and created some of the most amazing moments, matches and superstars that have ever been. Looking at the cover of Volume One and it is not surprising how many World Champions or WWE Hall of Famers are there.

This set brings together the three Volumes of the Attitude Era together in one handy place. Obviously, if you own these there is no reason to buy this and I was expecting something extra, maybe an extra disk exclusive to this set, but that is not to be. Looking back the only one I had not reviewed previously was Volume 1. My thoughts on Volume 2 and 3 can be found here and here. However, if you don't own either of these I will see as a complete look at that era between 1997 and 2001 this is an excellent set.

As for Volume One, I am surprised that this appears to be one that I have missed and it is one of the better WWE sets which gives a quick overview of the Attitude era (If I'm honest if you want a better look at all the topics here you might want to try the Monday Night War sets which I reviewed Here and Here) but it is certainly an entertaining look at this era.

Over the three disks it is packed to the brim with extra features including 18 matches and 21 extra segments consisting of interviews, promos and segments. If I was only looking at this set the only criticism is the lack of truly critical moments in the Attitude era. Obviously they include Austin's Beer bath, Mike Tyson joining DX and the debut of Y2J, but so many moments are missing... Austin's first stunner on McMahon, Austin confronting Mike Tyson, DX invading WCW, This Is Your Life Rock and of course Bret Screwed Bret. I would like to think that the following two sets make up for this, but they don't, which is a shame.

However, what is included is a wealth of highlights from the era and though I wish they went in some kind of chronological order, I will not argue simply because of how much there is.

Of the matches on here highlights are the Four Corners match between Stone Cold and Undertaker against The Rock and Owen Hart (replaced by DLo Brown), New Aged Outlaws and Mankind and Kane. This was such a PPV quality match and it is such a shame that more isn't from this era as this period with the feud between Austin/Undertaker/Kane/McMahon was amazing.

Including the TLC match from Summerslam 2000 between The Hardy Boyz, Dudley Boyz and Edge and Christian was a great look at just how phenomenal the tag division was at the time and though I would have preferred the No Mercy Ladder Match from 1999, this PWI Match of the Year winner is definitely not a match I am not happy to see here. What is strange is the lack of PPV matches with only six of the eighteen matches coming from a PPV, which almost showed how great the quality of the TV matches were at the time, but again there are so many matches missing such as Austin against HBK Wrestlemania 14, Undertaker vs. Mankind Hell in a Cell from King of the Ring 1998, The Rock against Stone Cold (either Wrestlemania 15 or Backlash as both are fantastic), but I do appreciate that it almost takes the idea that many of those matches are available elsewhere.

It is a shame that this not a Blu-ray set (with all three being available in that format previously and no other extra features, there is no real reason for this) and as many feel that Blu-ray is the step forward they may be put off by this fact or indeed pick up the individual sets in that format for the extra bits they include. However, as I say if you haven't got any of the others or a fan of this era then this is the set for you... if you smell what I'm cooking.