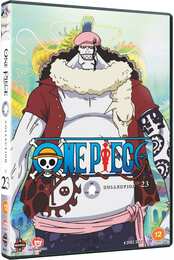 Review for One Piece Collection 23

We didn’t have to wait too long for the next collection of One Piece, which is a good thing when it comes to continuity. We’re at that point in the story arc cycle which I appreciate the least, but which is absolutely necessary. It’s the bit in the story where they lay pipe, an extensive flashback to fill in the back-story and dev Straw Hats are not in the story, and even though it’s flashback, it still feels like so much exposition. But without it, you won’t be able to fully invest in the story yet to come. If I had waited six months or a year for this, then with context faded in memory it would have been hard to appreciate, but as it’s barely been a month since Part 22 was released, then the story flows pretty well. 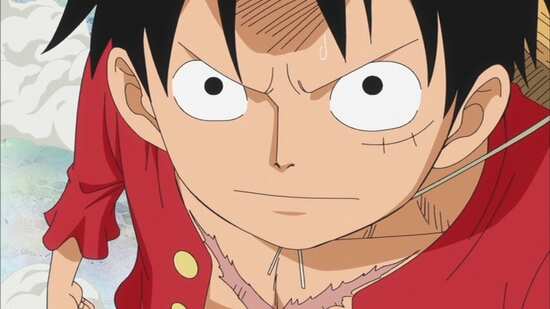 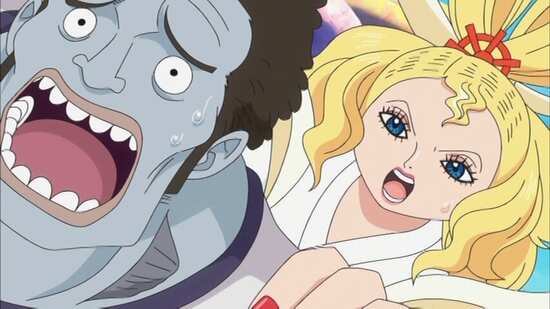 Previously on One Piece, Luffy and the Straw Hats had finally made it to Fishman Island, the undersea settlement that they had set out to reach two years previously. They received an ambivalent welcome from the inhabitants, tainted even more by a dire prediction from a local fortune teller, and they wandered into a full blown revolution out to overthrow the resident royal family, and in the process Luffy accidentally kidnapped a mermaid princess. 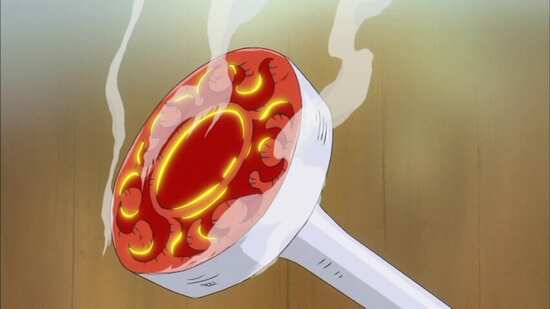 22 episodes of One Piece are presented across 4 DVD discs from Manga Entertainment.

NOTE: Episode 542 is missing on this release. This happened before, and for the same reason. Episode 542 is another crossover episode with the Toriko series, and Funimation who had the license for Toriko briefly, haven’t dubbed the crossovers, streamed them, or released them on disc. 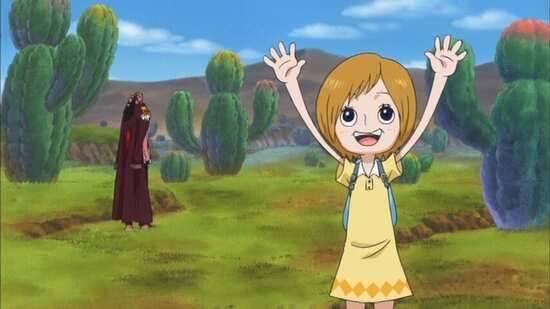 Disc 2
548. The Kingdom in Shock! An Order to Execute Neptune Issued!
549. A Rift Opens Up! Luffy vs. Jimbei
550. Something Has Happened to Hordy! The True Power of the Evil Drug!
551. The Battle is On! At Conchorde Plaza!
552. A Surprising Confession! The Truth Behind the Assassination of Otohime! 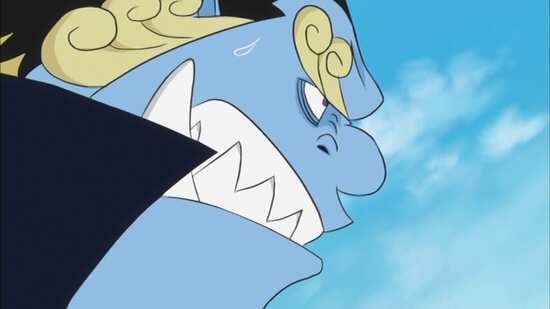 Disc 3
553. Shirahoshi’s Tears! Luffy Finally Shows Up!
554. A Big Clash! The Straw Hats vs. A Hundred Thousand Enemies!
555. Deadly Attacks One After Another! Zoro and Sanji Join the Battle!
556. Unveiled! The Secret Weapons of the Sunny
557. Iron Pirate! Here Comes General Franky!
558. The Noah Closing In! The Fishman Island Facing Destruction!
559. Hurry Up Luffy! Shirahoshi’s Life in Jeopardy! 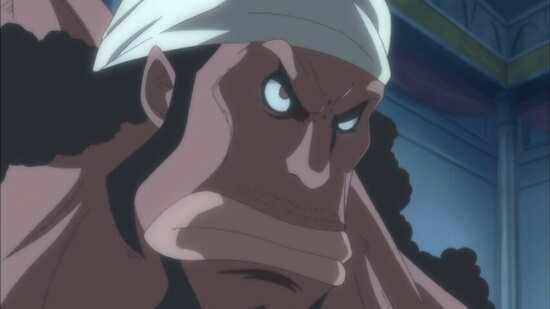 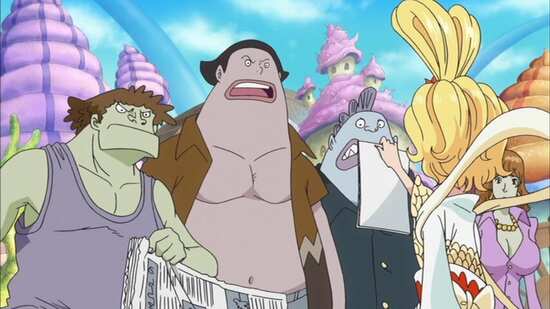 You have the choice of DD 5.1 Surround English, and DD 2.0 Stereo Japanese, with optional translated subtitles. The signs only track has been dropped, although it might have happened a few releases ago, as I only thought to check this time. As usual, I watched the series through in Japanese with subtitles, and found a fairly standard shonen anime dub, with enthusiastic and over the top performances that suit the tone of the show well. The stereo does a good job in conveying the show’s ambience and action sequences. Where One Piece really impresses is in its music score. Far from the comparatively weedy synth efforts afforded to the usual anime shows, One Piece apparently gets a full on orchestral score, at times giving the show an epic and grand soundscape that by far belies its comic book origins. The subtitles are free of error and are accurately timed. There are English language text overlays burnt into the print. Any place where a new character or new location is introduced, text appears to inform us of it. 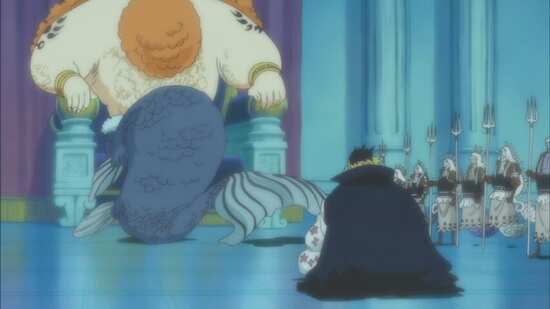 You get four discs in an Amaray case, one on either side of two centrally hinged panels. The inner sleeve offers an episode listing. 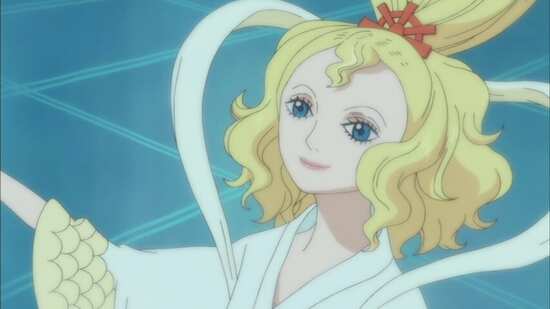 Disc 2 has the textless opening. 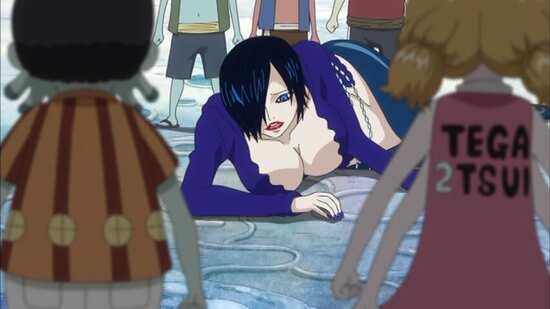 Disc 3 autoplays with a trailer for Funimation NOW.

There is an audio commentary on episode 559 with Bryn Apprill (Shirahoshi), and Troy Hughes (Mamboshi).

Disc 4 also has the textless closing.

One Piece: Pop Up Moments lasts 11:10, and some Funimation staff chat about the episodes. 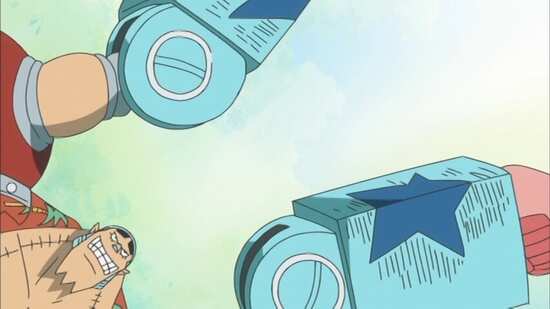 This arc isn’t the most memorable or impactful of the ones we’ve seen in One Piece so far, and in another disappointment, the arc doesn’t conclude in this collection of episodes. With Manga yet to schedule Part 24, we may have to wait some time to see how this particular story ends. The opening five episodes aren’t all that spectacular either, offering instead the drudgery of a flashback arc, relating the story of Fishman Island and how it relates to current events, a means to provide a background to the characters and some explanation of their motivations. 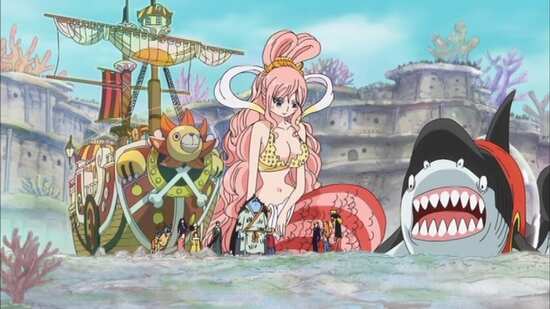 It’s all based on prejudice, with the Fishmen looked down upon, and treated as slaves by the humans above the oceans. Fishman Island became something of a refuge for them beneath the oceans, a place where they could be free, and the island split into factions, one advocating peace and reconciliation with humans, and another arguing for hatred and retribution. There’s certainly enough in the way of provocation to understand the latter viewpoint, even while hoping that the former will prevail. 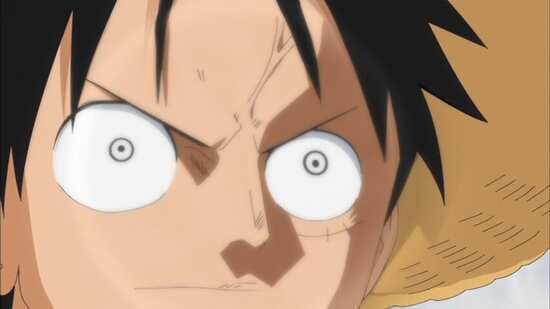 The Fishman Island that Luffy and his friends find is a place that has grown from that tense and occasionally violent debate, and it explains why they aren’t exactly welcome. They have arrived at a period of upheaval, with the leader of the New Fishman Pirates, Hordy Jones intent on taking over, and putting in place policies that violently oppose humans. That requires deposing the royal family of King Neptune and his three sons and one daughter. That’s where we find ourselves in this collection after the flashback exposition ends, with Hordy announcing the imminent execution of Neptune, and the good guys rushing to save him. So we have the Straw Hat pirates, Jimbei and Shirahoshi versus Hordy Jones and 100,000 Fishman pirates and their human slaves playing out for most of this collection. 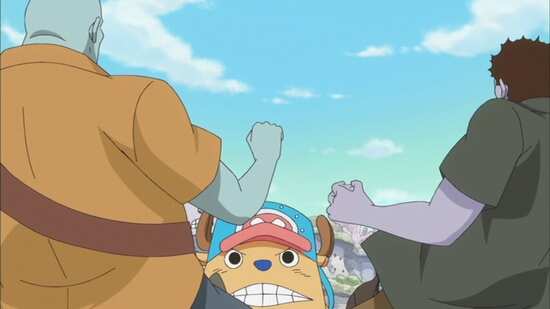 This battle isn’t as impressive as ones that have come before, as it is just so one-sided. One thing that I really do love about this collection is that the Straw Hats are back together again after so long, and it’s fun to see those familiar interactions and gags. But this arc is really to see how much the Straw Hats have changed over the two years they have been apart, and testing their new powers and abilities on their foes. Now Hordy Jones is built up as quite the villain, pumped on steroids, and eager to kill anyone who won’t fully support his credo of hatred. But I began to feel sorry for him by the end of this collection. 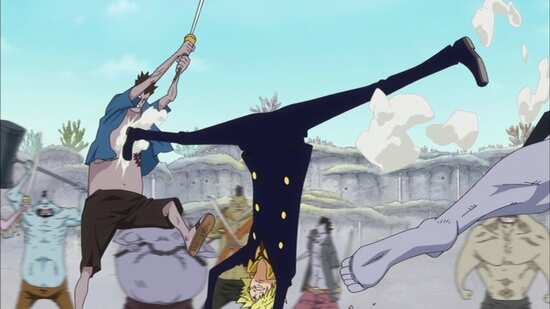 Everything he pulled out of the bag, every secret weapon and crafty strategy got defeated by the Straw Hats with ease. It’s obvious you are meant to compare this with how much trouble Luffy had with the Arlong pirates, and it’s like night and day. The only chance Hordy has against Luffy is in the water where Luffy’s Gum-Gum powers are weakened, and even there, Luffy has figured out how to be a little crafty, plan ahead. Of course Fishman Island is still in danger at the end of this collection, and it looks like Hordy has the upper hand again, but even when the dust (silt?) settles, I think this will be the most one-sided battle that the Straw Hats have fought. 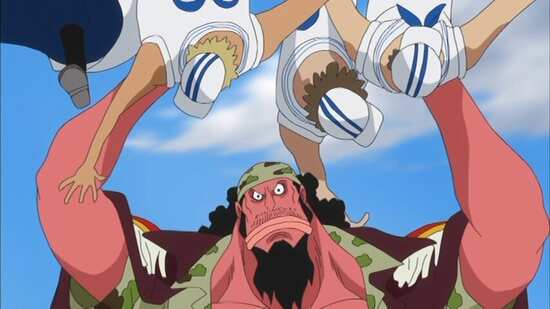 Incidentally, the title of episode 563, the last in this collection is pretty close to false advertising. It makes you think that you’re in for some great revelation regarding Hordy’s true identity, but that couldn’t be further from the truth, and it’ll make you wonder just what you spent 20 minutes waiting for. This isn’t the best of One Piece, but just as in the previous collection, it’s just so entertaining seeing the Straw Hats back together again that it’s easy to forgive the weak story at this point.