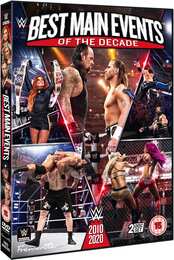 Over the years the WWE have had many matches which could be described as ‘The Best’ and during the time between 2010 and 2020 we have seen a lot of people take that main event spot on a PPV and blow everything out of the water. Often the best match is not the main event match and so I will not comment on some of the matches that should be here, because the use of the ‘PPV Main Event’ gimmick has meant that many midcard/tag matches are not represented here.

From WrestleMania XXVI we have the Streak vs. Career match between Undertaker and Shawn Michaels. This was one of the best matches from either career and definitely one of the most emotional matches in WWE history.

From Money in the Bank 2011 we have the WWE Championship Match between John Cena and CM Punk which was a legitimate Five Star Match and possibly one of the best matches I have ever seen. However, without the build or video package of why this match was happening it lost a little something (not much) but just lost a little bit of the edge.

From SummerSlam 2012 is No Disqualification Match between Triple H and Brock Lesnar which I feel was an excellent match from both and much better than the match Lesnar had against John Cena. Both work so well together and truly earned their main event place with this.

From WrestleMania 29 the WWE Championship Match The Rock and John Cena which is not a great match, but definitely an exciting one. If The Rock ever just wanted to come back for a yearly performance like this, I would welcome it. This was a nice passing of the torch from one generation to the next.

From Payback 2014 we have the No Disqualification Elimination Match between The Shield and Evolution and all I will say is this is the same year Daniel Bryan won his belt in the main event at Wrestlemania 30 and so this choice baffles me. It’s fine and an entertaining match, but not the best of the year.

From WrestleMania 31we have the infamous WWE Championship Match between Brock Lesnar and Roman Reigns where a certain person cashed in a briefcase and shocked the WWE Universe. I wasn’t too keen on this when I first watched it, but on reflection the match was great and that ending was a fantastic way to end the show.

From 2016 we have two matches From Extreme Rules an Extreme Rules Match for the WWE World Heavyweight Championship between Roman Reigns and AJ Styles and from Hell in a Cell we have the Hell in a Cell Match for the Women’s Championship between Sasha Banks and Charlotte. Now although I enjoyed both matches I feel like the women’s match pips it slightly simply because of the significance of it being the first PPV main evented by a women’s match.

From SummerSlam 2017 we have the amazing Fatal 4-Way Match for the Universal Championship between Brock Lesnar, Braun Strowman, Samoa Joe and Roman Reigns. This was a fantastic smash-mouth match filled with action and spots that only the four of these guys could do. I was never happy with the ending, but the match itself was awesome.

From Survivor Series there is a good Champion vs. Champion match putting Brock Lesnar against Daniel Bryan and though it was good, I never liked the ending or understood why WWE booked it in this way. If they had just kept the belt on Mahal I would have happily watched Lesnar destroy him, instead this was just disappointing.

It is not surprising that they included the first female main event at WrestleMania 35. This was the Triple Threat Winner-Take-All Match between Ronda Rousey, Charlotte Flair and Becky Lynch. The right person won and the match had some great moments, but as with most multi-person matches they should have had an elimination element to make it even more exciting. Instead, the ending is a bit sloppy, but you can understand why that is and as I say the best person won.

Finally from WrestleMania 36 we have the WWE Championship Match Brock Lesnar and Drew McIntyre. It is surprising that they would include this match and surely if they were going to include 2020 then they should have at least waited until the year ended, but then that is my issue with most WWE Year sets. This was a good match and it was a nice way to end with a changing of the guards. It was strange to see some of the other packed arenas and then see this one, but certainly a worthy match to watch again.

These matches all deserve to be here and it would be hard to find others, but I do wish that WWE had only included one from each year because by including two from 2016 makes me wonder why they didn’t make this a three-four disk set and do this for every year. You can’t tell me that this was the only year in a decade which had two matches worthy of ‘The Best’?
That being said, these are all some of the best matches I have seen over the past decade and so if you haven’t seen them then you will enjoy it.

If you own any of the twelve PPVs represented here (and considering five are from Wrestlemanias then this is likely) you have very little reason to purchase this set. I expected an overview of each year, maybe the build-up of each match or some people talking before or after about this match was on here and what it meant to them either as a performer or spectator. Instead we don’t get any of that. We get Match Match Match etc.

I once complained that I hated the Match Talk Match Talk sets that WWE used to do, but I would always explain that I just wanted to watch all the interviews in one go and then watch all the matches. WWE have just removed all the interviews and talking and so if you are unaware you may not know why matches such as CM Punk against John Cena or Daniel Bryan against Brock Lesnar was so important.

I do find with these sets they are just for convenience or some way that WWE can pat themselves on the back for having a few good matches, but I do wish they would put more effort into the package to make it a ‘Must Own’ item as this is simply just a collection of matches, all good, some great, some amazing, but all in all a set with no rhyme or reason and maybe in the next decade they can do a better one.