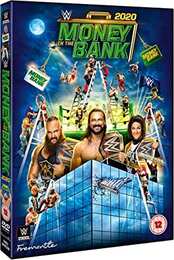 Review for WWE Money in the Bank 2020

Money in the Bank is usually one of the more important PPVs in the WWE calendar. This is when a new contender is made and we spend many months wondering when they will cash in that guaranteed title shot… and will they win?

With Covid-19 still restricting the company, WWE still showed this PPV in the empty WWE Performance Centre. Again, it feels odd and hopefully there is some way that a crowd can safely be a part of the show. As it is, this PPV is a little disappointing, though memorable at the same time.

The show started off with a very fast paced Fatal 4-Way Match for the SmackDown Tag Team Championship between The New Day, Lucha House Party, The Miz & John Morrison and The Forgotten Sons. Now, despite the fact that I absolutely hate the stipulation, this match was great and all teams worked so well. I was surprised that Lucha House Party got so much spotlight as they always felt like a team that WWE forgot about. I also love The Forgotten Sons and this is such a great name for a team.

R-Truth against Bobby Lashley was pointless. It was there to show that Lashley was dominant, but to be honest we didn’t need to see this and it should have been on the Kickoff for what it was.

The SmackDown Women's Championship Match between Bayley and Tamina was fine in general. I love the Heel Bayley persona and I just think that Tamina was the wrong opponent as she just feels like a poor man’s Nia Jax. It was the typical Big opponent being taken down due to a mistake. Not a bad match, just not very memorable.

The Universal Championship Match between Braun Strowman and Bray Wyatt was as mad as I expected. I did not believe for one second that Strowman would be dropping his belt, but the idea of him coming under The Fiend’s spell could have been interesting. The match, for what it was, was fine.

The match of the night was the WWE Championship Match between Drew McIntyre and Seth Rollins. This was a fantastic match and worthy of being a main event. It is a shame that the show did not end with this. I am not sure about the whole Monday Night Messiah gimmick that Seth Rollins is running with, it just feels like every other Heel Faction gimmick. However, I cannot deny that this was a fantastic match from both.

Finally, we ended with the Men's and Women's Money in the Bank Corporate Ladder Match. This took place in the WWE HQ and… sigh… was another attempt at WWE to create some kind of mini-movie.

It definitely had its moments and the mix of men and women and the cameos by the likes of Paul Heyman and Vince McMahon was fine, but really it just seemed to be comedy and nonsense for the sake of it. So much so, by the time they actually arrive in the ring I couldn’t take anything seriously.

As for the winners, I have no issue with it, though I am very surprised that they did not include the Raw announcement from the next night which was monumental and would have been great to see again.

The only extra is the Kickoff match between Cesaro and Jeff Hardy which was fine and I would have preferred to have seen this rather than the Lashley/Truth match.

This years’ Money in the Bank had to work with the restraints that Covid-19 has put on it, but this PPV did not feel worth watching again. Apart from McIntyre/Rollins, every match was just average, not bad (apart from the pointless Lashley/Truth match) but not great.

By the end of the Money in the Bank match I didn’t feel like I cared about who won. It is true that I am surprised at who won the Men’s and don’t know how they will go with that, but though it isn’t awful this isn’t a PPV that is worth the money.