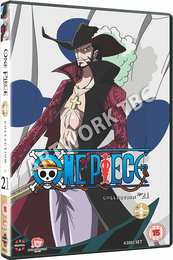 Review for One Piece Collection 21

If there has been one thing that has irked me in recent years, it’s the slowdown in One Piece releases in the UK. That’s probably a side-effect of Funimation switching distributors to Anime Limited for a couple of years, before buying Manga Entertainment outright and switching back. Manga release the One Piece franchise in the UK, and while they started at a healthy pace of around four collections a year, and even got ahead of the US by releasing the first nine feature films, things have really slowed down in the last few years. Collection 20 was released over a year ago. I got so desperate for a Straw Hats fix that I wound up importing a movie or two from Australia. But Funimation are back with Manga, which should make the process of releasing One Piece here smooth again. We’ve recently had the theatrical presentation of the most recent movie in UK cinemas, and we’re getting back to the TV series with the 21st Collection. Hopefully Collection 22 won’t take another year. But given where Collection 20 left off, this wait has felt doubly long. 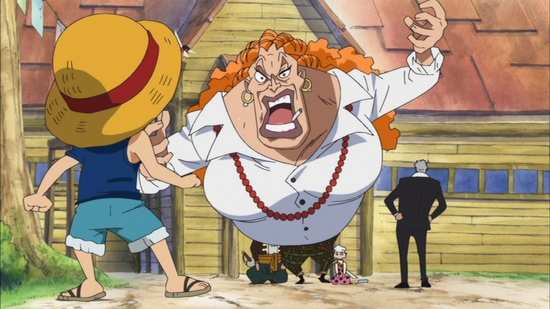 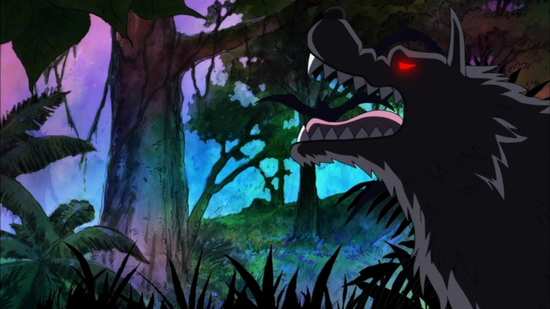 Previously on One Piece, Luffy went all out to save his brother Ace, but without the rest of the Straw Hat Pirates there, the challenge turned out to be too much for the rubber limbed pirate. As he deals with his failure, we look back to how the brothers first met... 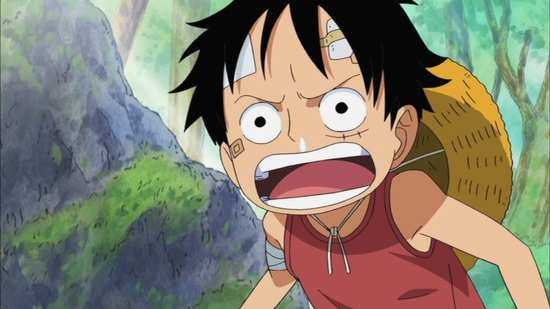 24 episodes of One Piece are presented across 4 DVD discs from Manga Entertainment.

Disc 1
493. Luffy and Ace! The Story of How the Brothers Met!
494. Here Comes Sabo! The Boy at the Gray Terminal!
495. I Won’t Run! Ace’s Desperate Rescue Operation!
496. To the Sea Someday! The Pledge of the Three Brats!
497. Leaving the Dadan Family For Good?! The Kids’ Hideout Has Been Built!
498. Luffy Becoming an Apprentice?! A Man Who Fought Against the King of the Pirates!
499. The Battle Against the Big Tiger! Who Is Going to Be Captain?!

Disc 2
500. Freedom Taken Away! The Nobles’ Plot Closing in on the Brothers!
501. The Fire Has Been Set! The Gray Terminal In Crisis!
502. Where Can Freedom Be Found? A Sad Departure of a Boy!
503. Take Good Care of Him! A Letter From the Brother!
504. To Live Up to the Promise! Departures of Their Own! 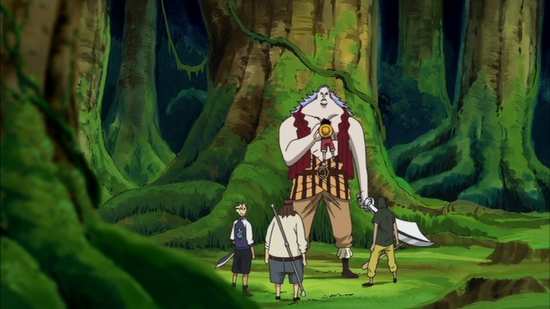 Disc 3
505. I Want to See Them! Luffy’s Mournful Cry!
506. Straw Hats in Shock! The Bad News Has Reached Them!
507. Reunited with Dark King Rayleigh! Decision Time For Luffy!
508. Back to Our Captain! A Jail Break at the Sky Island and the Incident on the Winter Island!
509. Encounter! The Great Swordsman Mihawk! Zoro’s Self-Willed Deadly Struggle!
510. A Disaster for Sanji! The Queen’s Return to the Kingdom!
511. Unexpected Relanding! Luffy, To Marineford

Disc 4
512. With Hopes It Will Reach My Friends! Big News Spreading Fast!
513. Pirates Get On the Move! Astounding New World!
514. Living Through Hell! Sanji’s Fight For His Manhood!
515. I Will Get Much, Much Stronger! Zoro’s Pledge to His Captain!
516. Luffy’s Training Begins! To The Place We Promised in 2 Years! 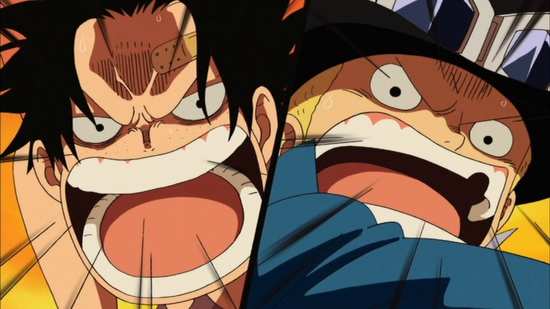 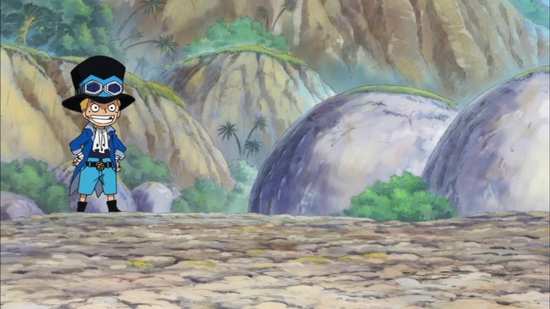 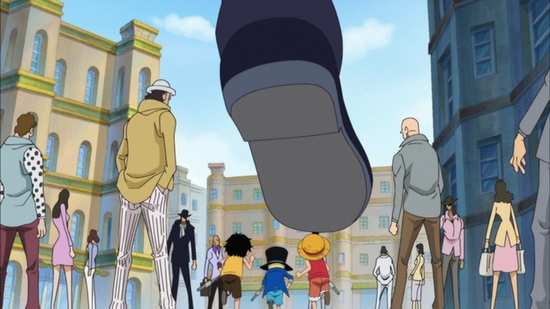 Episode 495 has a commentary from Jessica Cavanagh (Dadan), and Newton Pittman (Magra).

Disc 2 has a commentary on episode 503 with Chris Burnett (Ace), and Morgan Garrett (Sabo).

Inside Look: The Shot Heard ‘Round the World lasts 14:40, with Funimation staff talking about Ace. 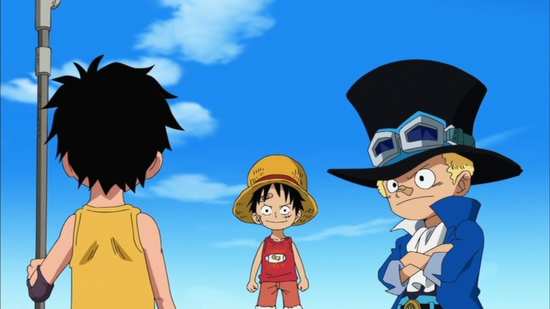 You get the textless opening, and trailers for Escaflowne, Summer Wars, Snow White with the Red Hair, Hetalia: World Twinkle, Psychic School Wars, and In Search of the Lost Future.

Disc 3 has a commentary on episode 506 with Brina Palencia (Chopper), and Chris Sabat (Zoro). 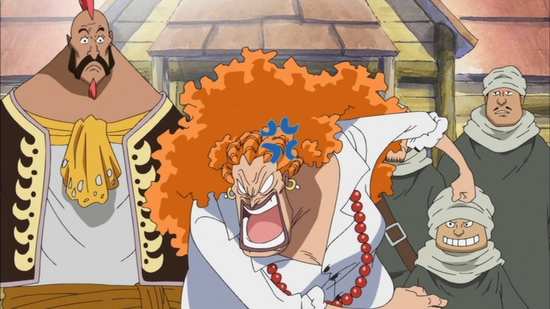 You also get an audio commentary on episode 515 with Sonny Strait (Usopp), and Ian Sinclair (Brook).

The textless opening is here. 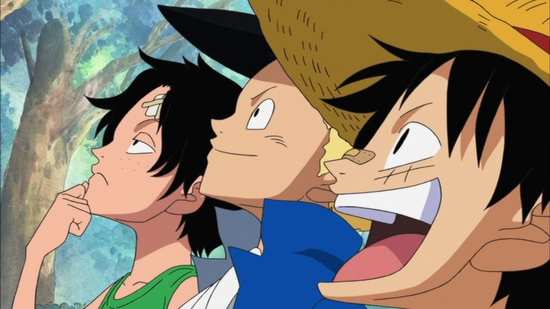 We’re in a lull, the equivalent of the doldrums if we stick with the nautical metaphors. After every major plot arc in One Piece, we usually experience a stretch of, if not filler, then episodes which feel like the characters unwinding, taking stock of what just happened, eating a few meals, and partying a bit before the next stretch of action, drama and comedy occurs. Given how epically the previous arc concluded at the end of Collection 20, you can expect a whole lot of taking stock in collection 21, although perhaps the party atmosphere’s absence is justified. 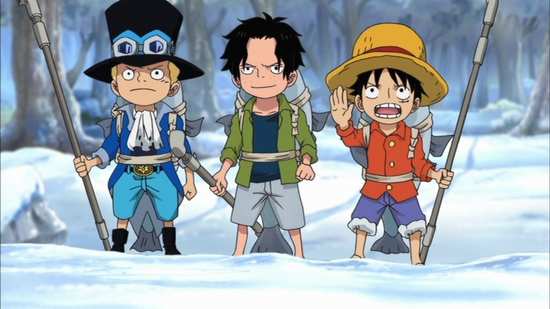 Actually we delay the lull in this collection, as the first half of the episodes are devoted to a flashback story. It tells of how Luffy first met his brothers. Yes, you read that right. It transpires that Luffy had two brothers, Ace we know about, but introduced in this arc is a character named Sabo. They first met when Luffy was seven, and Ace and Sabo were ten, and Garp dropped his grandson off to be raised by the mountain bandit Dadan. Dadan with her gang already had her hands full with Garp’s other ward, Ace, and predictably, Ace and Luffy didn’t get on at all at first, even with the younger boy trailing the elder trying to be his friend. It turns out that Ace already had made plans to become a pirate when he grew up, and with his friend Sabo, they were trying to put together enough money through theft and banditry to finance that ambition. Naturally, and through sheer force of personality, Luffy becomes one of the gang, and together they have plenty of adventures as they pursue their ambitions to become pirates, along the way swearing brotherhood as well. 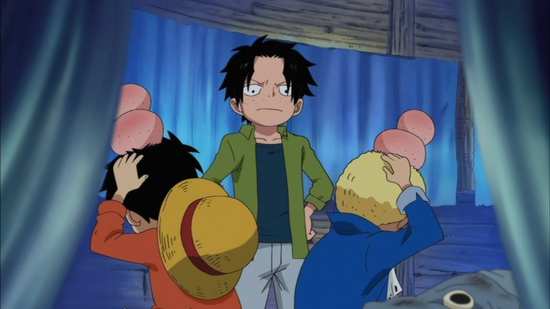 It turns out that all three are affected by their pasts, Ace by dint of who his father is, Luffy by the Gum-Gum fruit that he ate, and what happened previously with Shanks, and more importantly for this particular story arc, Sabo and the family that he is running from. Things get serious pretty quickly, the story reaches a tragic conclusion that drives the brothers’ determination to become pirates and seek out the freedom that implies. The story arc takes us forward ten years to the point where Luffy is finally setting out on his quest in a little boat, with a rather familiar looking barrel. 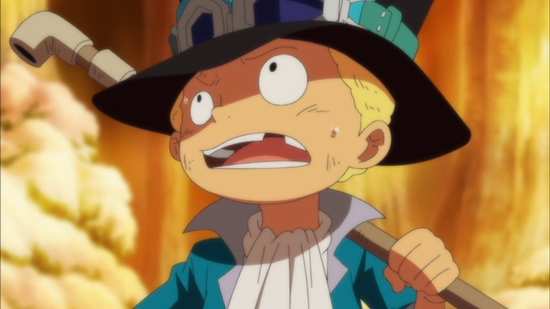 The second half of the collection is what you would have been expecting following the end of Collection 20. Luffy has to come to terms with his failure to rescue Ace, and also come to terms with his weakness, his unpreparedness to face the challenges that lie ahead in the New World. Luckily he has the friends he made in Impel Down, and on Saobody Archipelago to help him come to terms. But he hasn’t got the rest of his crew, who were sent flying to all corners of the world by Bartholomew Kuma. Previously, we just got flashes as to what Sanji, Usopp, Zoro, Nami, Robin, Chopper, Brook and Franky were up to, but in the final twelve episodes we’re pretty much cycling between their respective story arcs, as the news as to what has happened to Luffy reaches them, and eventually the message that he has to convey, which he does so through provocative means. 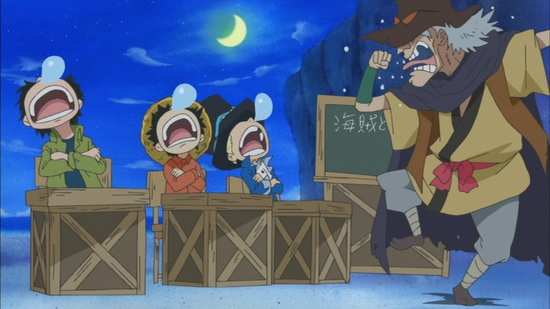 It’s slow, and it’s hardly moving the plot on at this point. It’s a bit of an indulgence really just to savour the characters, even if they can’t interact. That has been the weak point of the story in recent collections, from the prison break at Impel Down to the war at Marineford. It’s just been Luffy himself facing the challenges, with his crew elsewhere, and One Piece is best when the crew are together. But it’s clear that is coming to an end with this collection. We leave the characters at the start of their respective two-year training regimes, with Luffy learning Haki (the Jedi arts) with Rayleigh (Wan Kenobi), and the next episode preview at the end of the last episode promises a reunion of the Straw Hats. Once again, the next collection of One Piece can’t come fast enough.