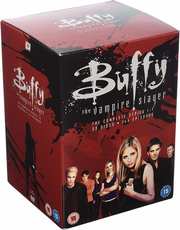 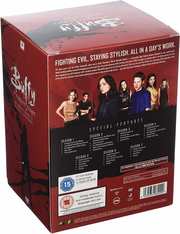 You’ve found the extras. Click here if you wanted the review.

Disc 1: Welcome to the Hellmouth; The Harvest, Witch, Teacher’s Pet.

There is an interview with Joss Whedon and David Boreanaz lasting 4:15.

The original pilot scripts are here for Welcome to the Hellmouth and The Harvest, for you to click through.

There are audio commentaries on Welcome to the Hellmouth and The Harvest from Joss Whedon.

Finally there is a Windows 95 screensaver, and a link to Buffy.com in a DVD Rom offering.

Here you get the “I Quit” music video from Hepburn, and there is a Photo Gallery with 28 images in.

Disc 3: The Puppet Show, Nightmares, and Out of Mind, Out of Sight, and The Prophecy Girl

On this disc, you’ll find text biographies for Joss Whedon, and the cast as well as the characters they play. 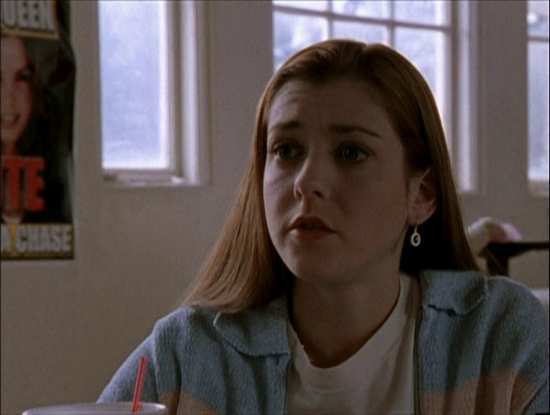 The animated menus on this season have transitions that take so long, you can pop off for a cup of tea while you wait.

Disc 1: When She Was Bad, Some Assembly Required, School Hard, Inca Mummy Girl

Disc 2: Reptile Boy, Halloween, Lie to Me, The Dark Age

In terms of extras Disc 2 has the script for Reptile Boy to click through, and an audio commentary for the same from writer/director David Greenwalt.

Here you will find scripts and Marti Noxon (writer) commentaries for What’s My Line, Parts 1 and 2.

You get the script for Innocence on this disc, as well as an audio commentary for the episode from writer/director Joss Whedon.

Disc 5: Passion, Killed By Death, I Only Have Eyes For You, Go Fish 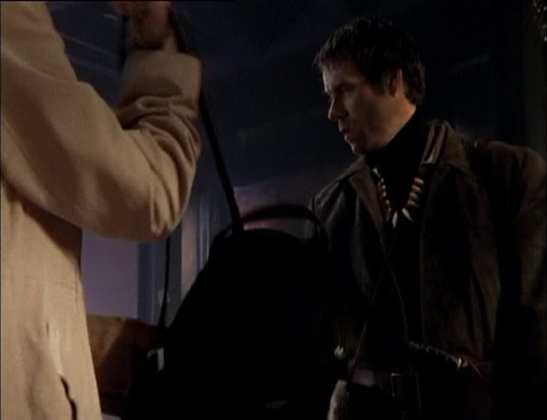 The original script for Dead Man’s Party can be read.

The Wish gets the original script treatment. There are a couple of featurettes on the disc, Buffy Speak (6:10) which looks at the language used in the show, and the Season 3 Overview, which lasts 20:53. You also get 9 text Biographies on disc 3, as well as an Art gallery of stills and other images to click through.

There is an audio commentary from writer Jane Espenson on Earshot. 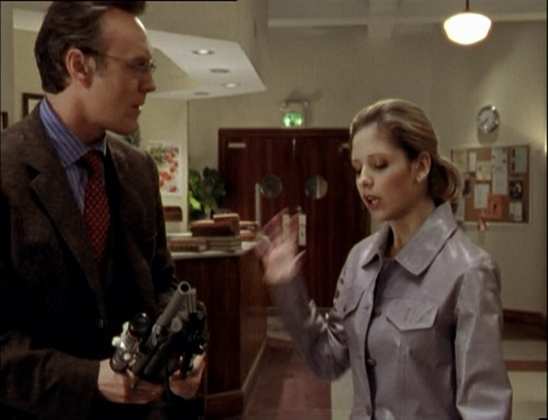 Disc 1: The Freshman, Living Conditions, The Harsh Light of Day, Fear Itself

Fear Itself gets the Original Script on the disc for you to read.

There is an audio commentary from writer Doug Petrie on The Initiative.

There is an audio commentary from writer/director Joss Whedon on Hush, as well as the original script.

There are trailers for the season 2 & 3 DVDs, and there are biographies for ten of the cast and characters.

Disc 4: A New Man, The I In Team, Goodbye Iowa, This Year’s Girl

There is a commentary on This Year’s Girl from writer Doug Petrie.

Disc 5: Who Are You?, Superstar, Where the Wild Things Are, New Moon Rising

Who Are You? gets the original script, while there is a commentary from writer Jane Espenson on Superstar.

There is a Season Overview, with interjections from cast and crew which lasts 35:02, and a Stills Gallery. 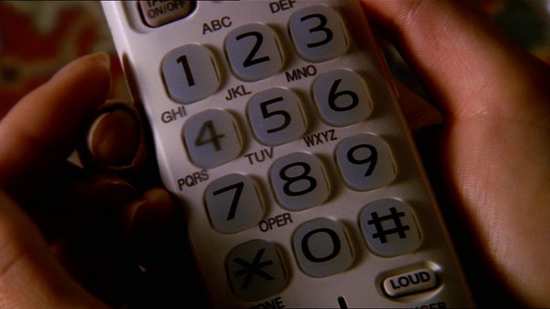 Disc 1: Buffy vs. Dracula, Real Me, The Replacement, Out of My Mind

There is a commentary on Real Me from writer David Fury and director David Grossman, while you can read the original script for The Replacement. From season 5 the commentaries are subtitled

Disc2: No Place Like Home, Family, Fool For Love, Shadow

Fool For Love has the original script to look at, and there is an audio commentary from writer Doug Petrie.

Disc 3: Listening to Fear, Into the Woods, Triangle

There is the original script alongside Into the Woods.

The Buffy Series Outtakes lasts 2:06, and there are trailers for the Buffy series DVDs 2-4, Angel series 1 and 2, and the Buffy the Vampire Slayer feature film.

Disc 4: Checkpoint. Blood Ties, Crush, I Was Made To Love You

Checkpoint has the original script to click through, while I Was Made To Love You has an audio commentary from writer Jane Espenson.

The Body has the audio commentary from writer/director Joss Whedon.

Disc 6: Spiral, The Weight of the World, The Gift 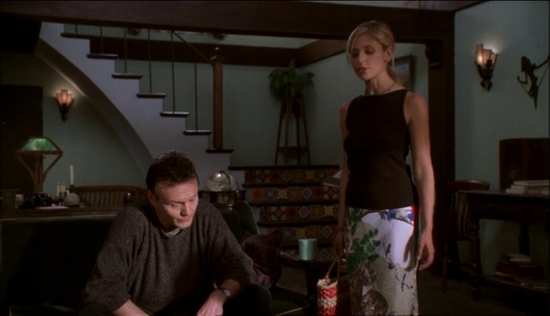 Disc 2: Life Serial, All the Way, Once More With Feeling, Tabula Rasa

There is an audio commentary from writer/director Joss Whedon on Once More With Feeling.

David Fury’s Behind the Scenes of “Once More With Feeling” lasts 28:16, and features interview with the cast and crew footage, rehearsals and recording studio, and of course making of footage.

“This is My Verse, Hello!” – Buffy Karaoke lasts 10:27 and features three songs from the show. This bit is in NTSC-PAL standards converted format, which is a bit jarring after the chipmunked PAL speedup of the TV show, but you get to hear the actors sing in their actual voices.

Smashed gets an audio commentary from writer Drew Z. Greenberg.

You’ll also find plenty of trailers for Buffy-verse product, but of more interest is the American Television Arts & Sciences Panel Discussion, a stage event with many of the cast and crew, including Joss Whedon at a 2002 stage event for a little Q&A. This lasts 59:29.

Disc 4: Doublemeat Palace, Dead Things, Older and Faraway, As You Were

Here you’ll find a short featurette, “Buffy Goes To Work”, where the cast and crew reflect on their first jobs. This lasts 5:03.

There are two commentaries on this disc, the one on Hell’s Bells features writer Rebecca Rand Kirshner and director David Solomon, while the one on Normal Again has writer Diego Gutierrez, and director Rick Rosenthal.

There is a commentary on Grave from director James A. Contner and writer David Fury.

Life is the Big Bad – Season 6 Overview is the analysis from cast and crew. This lasts 30:23.

Buffy The Vampire Slayer: Television With a Bite is a network documentary looking at the Buffy phenomenon, a making of retrospective from the film to the start of Season 7. This lasts 43:05. 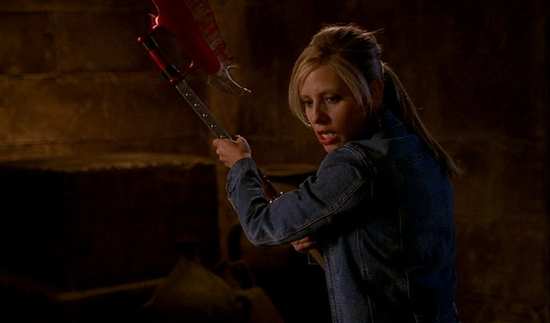 There is a commentary for Lessons with Joss Whedon and David Solomon.

Commentary for Selfless with David Solomon and Drew Goddard.

Disc 3: Never Leave Me, Bring On The Night, Showtime

Buffy: It’s Always Been About The Fans, is a 4:24 minute peek into the world of the Buffy Fan.

There are also trailers for Seasons 2-6 of Buffy, Seasons 1-3 of Angel, a computer game, themed DVDs as well as the movie that started the whole phenomenon.

Disc 4: Potential, The Killer In Me, First Date, Get It Done

Commentary for The Killer In Me with David Solomon and Drew Z Greenberg.

Commentary for Dirty Girls with Drew Goddard and Nicholas Brendon.

Disc 6: Touched, End Of Days, Chosen
This disc starts with adverts for the DVD releases of the Joss Whedon sci-fi series Firefly, and Season 1 of Roswell.

Commentary for Chosen with Joss Whedon.

Easter Egg that shows 7 years of Buffy The Vampire Slayer in 35 seconds.

Season 7 Overview: Buffy Full Circle is a 36:01 featurette that looks at the final season of Buffy, complete with clips of the episodes and interviews with cast and crew.

Buffy 101: Studying the Slayer takes 13:56 to relate how critics reacted to this brash new series.

Generation S is a 9-minute look at the potential slayers and the actresses who played them.

Outtakes is just that, 3:18 of general goofing around and much amusement.

Buffy Wraps is 5:02 spent at the show’s wrap party, with quickly snatched interviews, and asking the newly unemployed, “How do you feel?”