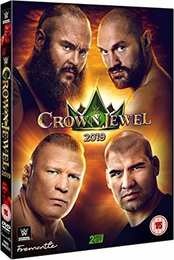 Crown Jewel is one of the most topsy turvy PPVs I think I have ever seen. I am just not sure what I am supposed to make of it. It's miles better than Super Showdown, but then with Goldberg and Undertaker that wasn't hard. These shows have become almost like glorified house shows, but this one did have its moments.

First up we have the issue of the two star attractions which were UFC's Cain Velasquez facing the man who he beat in the UFC Brock Lensar for the WWE Championship. Now, as formidable as Velasquez looks, we knew they were not giving him the belt. However, I expected more from this match. With both having that MMA background I expected at least something a bit more hard hitting or technical. Instead it was a waste of time.

The second one was Braun Strowman against former Boxing champion Tyson Fury. I expected nothing from this match and got a typical slugfest that wasn't a huge disappointing. It wasn't perfect, but compared to the previous match it was great.

There was also a lot of promotion for the first ever Women's match in Saudi Arabia between Lacey Evans and Natalya. When you consider how much outrage there was when they showed a woman in one of the promos a year ago this progress has been slow, but steady. I only wish the match had been a bit better.

Saudi Arabia's Mansoor had a great technical match against Cesaro. My only issue with this is of course we knew that Mansoor wouldn't be losing in his home country and so it made the match feel a bit predictable. Both were great and it is a shame they don't do more with either of them. The match between Humberto and AJ Styles for the US Championship was fantastic and possibly the match of the night. I was impressed by the work of Humberto and AJ was able to make him and himself look amazing.

The tag team turmoil to crown the Best Tag Team was actually a well booked thing, but it did feel at times that it should have been a tournament rather than this match as it did seem to favour whoever drew last. It included The OC, The Viking Raiders, The New Day, The Revival, The B-Team, Heavy Machinery, Dolph Ziggler and Robert Roode, Curt Hawkins and Zack Ryder and Lucha House Party. It was good to see all the tag teams, but it did seem to highlight just how weak the tag division is. There are some standout teams, but not many.

If you like tag team wrestling, you get even mre with the Ten-Man tag team match between Team Hogan (Roman Reigns, Rusev, Ricochet, Shorty G and Ali) against Team Flair (Randy Orton, Bobby Lashley, King Corbin, Shinsuke Nakamura and Drew McIntyre). Now, as with all multi-man matches this really should have been elimination or two out of three falls to make it a bit more interesting. That being said, it was a good match and everyone had a good showing throughout it just should have been for something.

The main event was Seth Rollins against The Fiend in a Falls Count Anywhere match for the WWE Universal Championship. After the debacle at Hell in a Cell the other stipulation was that the match could not be stopped for any reason. The match itself was odd. It felt hard to watch at times and I didn't really feel the chemistry between the two, but it was much better than the previous match they had. The ending was very confusing and I'm not sure whether I agree with it, but it certainly was a shock to see.

The only extra feature was the Kickoff 20-Man Battle Royal to get a shot at the US Title which was fine, but I did expect there to be more. Considering all the monumental things that happened (Debut of Tyson Fury and Cain Velasquez, the significance of the women's match) it is a shame that they didn't give more to go along with this.

This wasn't a bad PPV, it actually had some great moments and certainly worth a watch. However, all the tricks WWE pulled out to make the show seem special fell a little flat and maybe they should have focused on one or two rather than pack the show with so much. If you are a fan of tag team wrestling you may want to check this out to see what WWE has to offer as it is one of the few jewels in this crown.