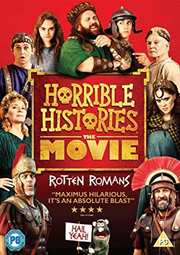 Horrible Histories The Movie: Rotten Romans is technically the second flm from the team after the Shakespeare themed Bill, but this is the first one to come under the 'Horrible Histories' banner. Based on the best selling books by Terry Deary, the Horrible History franchise has been a staple of the CBBC channel teaching many children in a rather comical way about historical times and people. This film, as you can tell from the title, is regarding the Romans, more specifically the time of the uprising of Boudicca in Britain during the reign of Emperor Nero.

The plot follows two young characters, Orla, a Celt who dreams of being a warrior and Atti, a Roman who really just wants to spend time reading his scrolls. Instead, after an incident involving a horse, a gladiator and the Emperor, Atti is sent to Britain as a punishment. Here he is captured by Orla and they both become part of the Battle of Watling Street between Boudicca's mighty uprising and the Roman forces.

As with the books and show, this film was wonderful as a way to get children to think about history. The comedy was very Pythonesque and though much will go over the heads of children, there is enough that hits home like a well placed arrow or catapulted guard. The film looks great with costume, sets and overall feel coming straight out of any serious drama, but thankfully none of this is taken seriously and that's what makes it so much fun to watch. Despite the subject matter, which if read properly is quite grim, this puts a light spin on it all that makes it enjoyable for all. Throughout the film there are a number of songs which are catchy songs which are all fabulous and do not slow down the film, but give that extra flavour that just works perfectly.

The cast is almost like a Who's Who of British Comedy with Nick Frost, Lee Mack, Alexander Armstrong, Warwick Davis and also some great performances by the likes of Kate Nash as the all singing Boudicca, Derek Jacobi, reprising his infamous role of Claudius and Kim Cattrall as Agrippina Claudius' wife and Nero's Mother. The main central roles of Emilia Jones as Orla, Sebastian Croft as Atti and Craig Roberts as Nero are amazing and these are bright stars for the future for sure.

My only gripe is that apart from the beginning and the end, the film does not reflect the anarchic 'Teaching' aspect of the TV series. Usually throughout an episode the character of Rattus would pop up every now again to give some facts about the situation or people or present a quiz. I understand this may not have worked in the context of the film, but it was something that was sorely missed from their usual format. Maybe if they had used Rattus as a Narrator character or something as a way of doing this it could have still had that feel of the show and books.

The Rome Song is fun as many of the songs in the film are and I am surprised they are not all included here to watch away from the film itself. Beastly Behind the Scenes and Silly Stunts are presented by Rattus (the puppet) . The Behind the Scenes is about twenty five minutes of interviews with people involved in the film during the making of the film. These are great and the use of the Rattus character does make me realise how missed the character is in the film. Silly Stunts is a short look at some of the stunts and how they were done. This was a little short and not really worth watching other than for some more interviews by Rattus. One of the things that is a shame is that throughout they show some great outtakes and I wish they were included as a separate feature.

This film is a great way to bring children into learning history and I do hope there are plans to make more of them. I found the whole plot and the way it was presented hugely entertaining for all the family. The kids will love the anarchic nature of everything and the general humour and the adults will love the jokes that may be a little too clever for the kids. If you love the books and TV show then you will definitely not have a horrible time with this film.