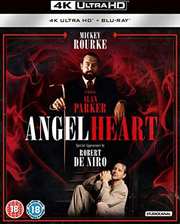 Angel Heart is a dark tale of mystery, voodoo and death and generally regarded one of the most chilling and stylish films of the 1980s. Harry Angel is a Private Detective who is hired by a creepy Louis Cyphre to track down an old musician who owes him a debt, but is believed to be dead. The clues Angel travels south to New Orleans where he encounters a number of strange people including Epiphany who is the daughter of the man he is searching for. It is not long before the real intentions of Cyphre are shown and Angel’s involvement is more insidious than he first thought.

This film is beautiful. If you wanted to show someone an example of pure Noir-style filmmaking and how to create mood, then this is the film to show them. Sets, costumes, Michael Seresin’s beautiful Cinematography is just perfectly surrounded by the gorgeous score provided by Trevor Jones. Alan Parker’s Direction is amazing and there really should be nothing negative to say about the film.

This film is so slow with very little happening that I found myself feeling a little listless and, if I’m honest, a little bored. The acting from Mickey Rourke as Harry Angel is fine in general, although his performance is basically just a cliché of all Private Detectives in the past. Lisa Bonet as Epiphany is also perfect, but I do feel that the whole controversy about her performance only makes sense if you were watching it at the time. Now it is just a fine performance, punctuated by the visually stunning and rather trippy sex scene between herself and Rourke.

Despite being all over the posters and art, it is not surprising that Robert DeNiro’s performance as Louis Cyphre is referred to as a ’Special Appearance’ as he only appears a few times throughout. However, these are the most memorable parts of the film. His performance is very calm and precise and though his final scene is a little goofy, I did enjoy him throughout and it is a shame that he is not featured more as I did feel that once he left the film lost a little something.

This is not to say I didn’t enjoy the film, I just feel that the plot of the film was simple enough, but the film just drags to the point where I found myself not enjoying it. If it had been a bit shorter it would have been a much better film and I just felt that the mood building just did not actually lead to anything at all. This is a shame as it is generally regarded as one of the best films of the 1980s, but I just did not see what everyone was raving about. As I say, it is technically a masterpiece in filmmaking from a technical point of view, but is just let down by a rather simple script and could have been better if it was just tightened up and made a little shorter.

Commentary by Writer/Director Alan Parker is very hit and miss. I think the main problem is that he doesn't talk all the time and so there are long periods of silence where he isn't commenting on anything. It just feels like he only had a few scenes that he really wanted to talk about. I hate this kind of commentary as I have a desire to skip, but you cannot do that otherwise you might miss something. If he was unable to talk about the film for the whole duration, he should have been given someone to talk to or another person from the film to fill in the gaps.

Behind the scenes footage is also less than two minutes footage of a few scenes being shot. There is no context and so this is fairly pointless. News Features is a short Making of from the time of the film's release to promote the film and looking more at the use of Voodoo in the film.

There is another interview with Alan Parker which is more about Parker's career, but does cover the making of the film. This is a better feature and if you enjoy the film it does cover most aspects of the film's creation. Parker also gives a short introduction to the film which is nice, but short.

A Background to Voodoo is a five-part look at the themes of Voodoo and this would have been great if I didn't have to play each one individually. This really needed a 'Play All' option and though it was fascinating and well made, it was clearly not made for this film and are only for those who are interested in Voodoo or this aspect of the film.

Finally, we have the Behind the scenes gallery which consists of sixteen still images and so is a little pathethic when you consider the visual style is one of the main things people comment on about this film. I expected at least some set or costume designs and concepts. There is also a Teaser Trailer which is fine and does its job.

Angel Heart should be an amazing film. It has its moments and I certainly didn’t regret watching it. I just feel that it has buckled under the critical acclaim heaped on it. I enjoyed much of the film and it certainly looks amazing. If you want a masterclass in scene composition then this is definitely a film I would look at. However, if you are looking for the Horror/Mystery that it claims to be, you may be disappointed with the lack of heart in this fallen angel of a film.