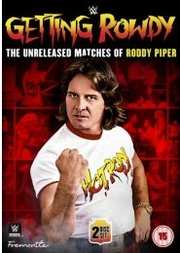 DVD
WWE Randy Orton: The Evolution Of A Predator

Review for WWE: Getting Rowdy - The Unreleased Matches of Roddy Piper

If there was ever a set that hit me right where it hurts, it was this one. This set reminded me that the Rowdy One, Hot Rod, Roddy Piper is no longer with us and the wrestling world is a less colourful place because of it. I watched these two disks and all I kept thinking was 'And we will never see any more from him.' This set is a mix of matches and promos that have never been released covering the long career of Rowdy Roddy Piper.

Throughout the set, we get archive interviews with Piper about his career and this almost makes me wish this was a complete new set with all his matches and interviews. However, they do include a lot of brief clips of these highlights. Seeing him on the mic was just electric and if i was an upcoming wrestler wanting to learn how to cut a promo Piper would the first person I would look at. There are many promos from Piper throughout his career and he shows that he is correct that 60% of Professional Wrestling is the promo that gets the crowd to the arena.

There are some interviews with Rowdy Ronda Rousey and it was wonderful to see how she was influenced by Piper into her MMA career and beyond. It is odd that she is the only person to contribute apart from some old interviews with Piper himself and maybe she should have been the host of the set and you can tell how much Piper meant to her and I have to admit that her story about never taking him up on calling him again for help is just heartbreaking.

Three matches from the old NWA territory are fine in general and show just how good he was in the ring, but he was never known for this and so it is great to actually see it. His matches in the WWE are more or less squash matches against jobbers, but there is a fantastic match against Superfly Jimmy Snuka and both work so well together.

Despite them being allies so often there is a fantastic match between Piper and Mr Wonderful Paul Orndorff. This was a great match from them both and it was odd hating both for so long and seeing them against each other, I wasn't sure who to cheer and boo, but the crowd absolutely loved every second of it. There are also two pretty great matches with Mr Perfect which are both great matches from the two of them and it was a shame this didn't lead to more.

My biggest issue with the set when it comes to matches is that unfortunately when it comes to in-ring competition there were never that many notable feuds involving Piper. This is evident when looking at the matches which are often against random people like Rick Rude, Rick Martel and Mr Fuji. The matches themselves are not bad, some are actually pretty entertaining and whether he is a Face or Heel, Piper is always able to elevate the match, but in the long run, very few of them mean anything.

Once Piper went to WCW I would be the last person to say that the quality of his performance got better. Like most things, WCW did not know what to do with Piper with some strange promos and vignettes (including one where he was in Alcatraz?). There is a match with Macho Man Randy Savage which is fine in general, but still felt like a match that didn't mean much and was (as with most things) just a way to elevate the nWo. A match against Hollywood Hulk Hogan was again pointless and as with most WCW matches ended in chaos.

Returning to WWE after the closing of WCW there is a random match between Rikishi and PIper which proved he could still work his style, but not a great match. He also went against Randy Orton (with his dad and Piper's old partner Cowboy Bob Orton). This really could have been a PPV match and I feel this was wasted on TV and though Piper is clearly no match for the young Orton, it was still entertaining to watch. There is also an entertaining (if slightly crazy) match teaming with Batista and Eddie Guerrero against the Ortons and Mr Kennedy. This match was almost a double gut punch seeing both two of the most charismatic people in the business in Eddie and Roddy, who are no longer with us anymore.

Piper was infamous for his Piper's Pit segment and you could almost trace every 'In-Ring Show' to this. There are a number included here with the likes of Paul Orndorff. Sadly, they do not include the infamous Superfly Jimmy Snuka one, but this is available on the previous set. His Pit that promoted Wrestlemania was just perfect and made me hate and love him even more. There is also a great one with Andre the Giant and showed Piper as the scared weasel which was hilarious.

Later on his career whenever Piper was brought back it was to host a Piper's Pit. These are all great and later ones with him interviewing The Miz, John Cena, Daniel Bryan, The Shield or Rusev are great and even though I don't understand why Piper was there, it was never a bad thing to see him.

A number of WWF commericals with action figures are included also. I do feel things like this should have been kept as an extra feature as they are great, but didn't mean anything to whole set itself. Persoanlly, I think this is what this set misses is that 'Extra Special' aspect which the set could have achieved by maybe splitting the set up so that it was all matches and then all promos and having things like the commercials and maybe a few of the extra interviews with Piper as extra bits you could watch. This did not feel like a set that you could watch as one continuous narrative, but should have been a half hour look at his career with the interviews with Ronda Rousey followed by the rest being selectable extras to watch at your leisure.

However, this is not say that this is a bad set, far from it. I found myself sitting and watching more of this than I would with most and despite the quality of some of the matches, I still watched them for how Piper portrayed himself throughout it. If you are a fan of Roddy Piper, which should be every fan of wrestling, then you will enjoy this. If you are a fan of promos then this is a goldmine for you, as this is the best in the business, showing everyone past, present and future just how it's supposed to be done. It was hard watching Piper, knowing he is no longer with us, but it was so enjoyable to see how much his legacy meant to the wrestling business.