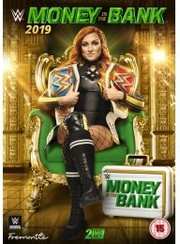 Review for WWE Money in the Bank 2019

This years' Money in the Bank was one of the best and worst PPVs I have seen in a long while. In some ways I applaud WWE for what they were able to achive. I have never watched a show and enjoyed most of it... until the ending and that ending just destroyed all that goodwill. I am astonished by how WWE managed it, but they did.

Shane McMahon against The Miz was an enjoyable mess. The ending baffled me and to be honest, I don't know why they are continuing with the 'Best in the World' storyline with Shane and this could and should have been a great ending to this and at times I wasn't sure why it was even in a steel cage.

Tony Nese against Anya Daivari for the Cruiserweight Championship was great as always. Nice to see them on the main card and not just a Kickoff match. A great showing from both.

Next up we have back to back to back Women's Championship matches with Becky 'Two Belts' Lynch defending both her Raw and Smackdown Women's Championships on the same night. The Raw belt against Lacey Evans and the Smackdown belt against Charlotte. My main issue with this, is that neither really deserved a shot. I could understand if there was a reason behind it, but I did love the fact that Becky called both them and the WWE out on this obvious pushing of these handpicked blondes. Of the matches, neither was fabulous. I didn't like the fact that Lacey was taken out with the Dis-Arm-Her so quickly and this made her look a little weak. The fact that the Smackdown match started straight after was a typical Heel thing, but I had no issue with it, until she lost. My brain just exploded. WWE had spent so long building up the 'Two Belts' persona that I was surprised they let it go so quickly. The fact it was Charlotte once again winning almost sent me into a rage...

That was until Bayley hit the ring. I have never been so happy to see Bayley (and I'm always happy to see Bayley). I usually don't like the cheap, quick cash-in of the Money in the Bank (especially on the same night), but this was perfect.

I would love to talk about the Elias/Roman Reigns match, but it didn't really happen. It's always great to see him play a song, though I wish WWE would remember that Elias can actually wrestle. It was just a cheap heat moment, not that that's a bad thing.

Seth Rollins defending his belt against AJ Styles is a strong contender for Match of the Year and I was amazed by just how well these two worked together. Both put on a fantastic showing and both looked amazing because of it. This was one of the best Universal Championship matches I've ever seen.

The following match between Kofi Kingston defending his WWE Championship against Kevin Owens was a fine match, but did not feel special. If you had told me this was for a mid card title then I would believe you. That being said, I still enjoyed it and both work well together.

Finally, we have the amazing Money in the Bank match. This is a match that will be analyzed for years to come in how to perfectly book action for over fifteen minutes between seven people who spend the entire match proving why they should win and then not delivering with the ending. During all this time, new stars like Andrade, Ali and Ricochet showed just how great they are and that WWE are in safe hands if they are given the ball to run with. And then WWE get scared and toss the ball back to Brock Lesnar??

As soon as his music hit my brain exploded. This wasn't the joy pop like when Bayley appeared or when The Undertaker's bell gongs... no this was WWE proving yet again that they would rather push a part time performer and give them all the opportunities (that he doesn't even need) rather than give it to ANYONE ELSE who could use the push.

Because of this, I left this PPV feeling angry that WWE messed it all up again.

On this Two-Disk set there are a number of Extras. These include the match Kickoff Match between The Usos against Daniel Bryan and Rowan. This is a great match and it is a shame it wasn't on the main card as it probably would have been given more time, but great showing from both.

From Raw we have the signing of the match contracts between Becky Lynch and her two opponents Lacey Evans and Charlotte. Becky 'Two Belts' Lynch or The Man is clearly one of the most over and entertaining people on the roster at the moment and this was all just great.

From Smackdown, The Kevin Owens Show with Kofi Kingston was fine at really just served as a reminder that Kevin Owens was a big deal in the past. Finally, we have the biggest slap in the face ever with Brock Lesnar celebrating his Money in the Bank win on Raw. My head and fingers hurt writing that sentence. Brock using the briefcase like a boombox is one of the stupidest visuals I have ever seen in my life. His interaction with Seth Rollins and Kofi Kingston was fine, but I still shake my head at the whole scenario.

Money in the Bank 2019 was so close to being an amazing PPV. So close. If WWE would just take a chance they could have produced a PPV that I would happily watch again. Instead, this is a PPV that I don't want to watch again ever. When you consider it contains many great matches and a potential Match of Year contender between Rollins and Styles this is such a shame and a wasted opportunity.