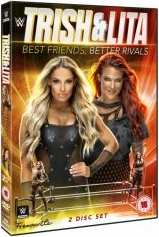 DVD
You Think You Know Me? The Story of Edge

DVD
The Epic Journey of Dwayne 'The Rock' Johnson

When people do their top ten female wrestlers the first two names that are immediately said are Trish Stratus and Lita. Before anyone wants to argue about the importance of people like Sable, Sunny or Chyna, I say that when I do my top ten of women in wrestling I start with Trish and Lita (changing them between 1 and 2 on a daily basis) and then work from there.

I feel this set with its tag line ‘Best Friends, Better Rival’ is a little misleading and based on this I thought this was going to be focusing on the feud between the two. This is touched upon and there are a number of matches between the two here, but really this is just two disks: one focuses on Trish and the other on Lita. Each disk looks briefly at how they got into the business and their development until they retired. Both are full of stories about how awful the women’s division was, with two or three people, but not the wealth of the roster that the WWE has today.

Across the two disks there are Twenty-One matches and I would be lying to say that they are all Five Star mat Classics, however, unlike a lot of sets none of these matches are unwatchable and it doesn’t hurt that Trish and Lita are so appealing to the eye that I could happily watch either of them all day long. Thankfully both retired before the division devolved into the awful ‘Divas Championship’ era when most of the roster was hired based on how many Playboy covers they had done and it can’t be explained how important both were to the women’s division.

Highlights include the 6-Pack Challenge Match for the WWE Women’s Championship between Trish Stratus, Lita, Ivory, Molly Holly, Jacqueline and Jazz from Survivor Series 2001was a good showing from the best of the division at the time, despite the match not making much sense.

Her storyline with Chris Jericho and Christian was just fantastic and they include a great match pitting Trish Stratus and Christian against Chris Jericho from Backlash 2004. There is also a fantastic Raw match from 2000 teaming Trish and Triple H against Lita and The Rock and just showed how popular they were to be in the ring with arguably the two biggest stars in the industry at the time. There is also a good match teaming Lita and The Hardy Boyz against Test and Albert (T&A) from Fully Loaded 2000 which is great way to show just how well Lita worked with the Hardy Boyz team.

There are a number of one on one matches between Trish and Lita starting with a Bra and Panties match between Trish Stratus and Lita from Raw 2000 which is as crass as it sounds, but these two made it work perfectly. Two WWE Women’s Championship Match between Trish Stratus and Lita at New Year’s Revolution 2005 and Unforgiven 2006 WWE Women’s Championship Match are great and showed just how well they worked together. However, their best match that their Raw main event from Raw 2004 which showed just important they were not just to the Women’s division (because let’s face it, they were the women’s division) but the whole WWE in general.

Arguably the best match across the two disks (possibly best women’s match ever) was the WWE Women’s Championship Match between Trish Stratus and Mickie James from WrestleMania 22. The build and storyline into this match was just fabulous and was one of the few women’s storylines that wasn’t just about the belt or a man or something, it actually had a lot of layers and was performed perfectly. The match was as close to a perfect wrestling match as you could hope for at the time.

Lita also had two great matches against Mickie James from Raw and Cyber Sunday 2006. Though these didn’t have the same storyline impact, both were still great matches from the two. There is also a wonderful first Steel Cage Match between Lita and Victoria from Raw 2003 and it was interesting hearing Lita talk about how she was given all these rules of what she could and couldn’t do in the match. Still a great showing from them both.

Finally, we have two matches from 2018 with both Lita and Trish coming out of retirement on the build up to the Evolution PPV. From that PPV we had Lita and Trish Stratus against Mickie James and Alicia Fox. This wasn’t a great match, but considering the occasion and the fact this was their first back in years it was pretty special to watch. From the next night on Raw there is an even better Ten-Woman Tag Team Match featuring Trish Stratus, Lita, Bayley, Sasha Banks and Natalya against Mickie James, Alicia Fox, and The Riott Squad. This was a fantastic showing from everyone and could easily have been the main event.

Also included are both Trish and Lita's Hall of Fame inductions. Both are great and Trish's reveal of being pregnant was such a nice moment. For Lita they also include her unveiling of the new WWE Women's Championship or the Jammy Dodger belt as I call it. It was nice for her to be part of this and it was great that they made it such a big deal at the time. Also included is Lita's wedding to Kane which was insane, but also features Trish at her Heel-ish and sexiest.

Despite the misleading title, Trish and Lita: Best Friends, Better Rivals is a solid set and one that anyone who enjoyed women’s wrestling should have a look at. It’s not perfect by any stretch, but there are a lot of enjoyable matches and both (Trish particularly) show just how much hard work they put in to become the icon she is. If you are a fan of either then this is a great set and if you still can’t get enough of the women in the WWE then this is a great set to watch.