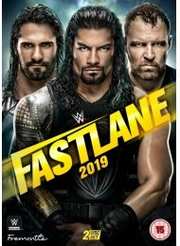 With this being the last PPV before Wrestlemania, Fastlane is usually when all the blocks are finally put in place. Sadly, that is not the case. This was a PPV that had so many good moments and so many that just made me scream.

The SmackDown Tag Team Championship Match between The Usos against The Miz and Shane McMahon was a good match. The ending came out of nowhere and I was surprised they did not lead this into a Mania match between the two teams, however this was a great showing from all involved.

In the SmackDown Women’s Championship Match between Asuka and Mandy Rose all it did was highlight that Asuka had no opponent at Wrestlemania. This should have been a Number One Contender match, but we all know that never happened. It was a good dominant showing from Asuka.

This is when the wheels fell off this PPV with an utterly pointless Handicap Match between Kofi Kingston, who we all thought was being put in the main event, instead he was put against The Bar. This was just a brutal beating and though there were some great comeback moments, it made absolutely no sense.

The Triple Threat Match for the Raw Tag Team Championship which pitted The Revival against Bobby Roode and Chad Gable and Ricochet and Aleister Black was a pretty good match as was the Fatal 4-Way Match for the United States Championship between Samoa Joe, Rey Mysterio, R-Truth and Andrade. However, neither were given enough time to mean much and maybe if they had they would have been better to showcase the teams and people more.

The WWE Women’s Tag Team Championship Match between Bayley and Sasha Banks against Nia Jax and Tamina was again too short and really did not mean anything. I am glad they did not lose the belts straight away, as it would have taken some of the special shine off the belts.

It is a sad day when even when Brock Lesnar is not on the PPV Daniel Bryan can still not main event a PPV and is this low on the card. However, the Triple Threat Match for the WWE Championship between Champion Bryan, Kevin Owens and Mustafa Ali was fantastic and definitely match of the night. It was given enough time for everyone to get their moments in and I was impressed with how well Mustafa Ali worked with the other two. Although I would have preferred Kofi to have been involved in the match, I think what we got was pretty solid.

We then have a match that I just facepalm to even try to explain. Becky Lynch had already booked her way to a match against Ronda Rousey at Wrestlemania by winning the Royal Rumble. Due to injury, Becky was removed and replaced with Charlotte Flair, who added for no apparent reason other than it was the choice of Vince McMahon. Obviously, Becky was not happy about this and if you had followed her on Twitter, the war she had with everyone was priceless.

Becky finally won her chance to get her title shot back, which she never lost. Instead of this being a match for who faces Ronda Rousey… No that would be too easy! Instead, this is a match to allow Becky Lynch to be added to the match, making it a Triple Threat.

As for the match? It is an absolute mess. The ending made no sense whatsoever and to be honest it didn’t even matter what the outcome was I did not want Charlotte to be part of the match. The match was awkward and them leaning on Becky’s injury was just painful to watch. I would love to say that I was glad that Becky got added back into the match, but the match we wanted to see was Becky against Ronda and maybe Asuka against Charlotte, but WWE doesn’t want to do that. As it is, this just sets up a match I have no interest in.

Finally, we have the last ever appearance of The Shield against Baron Corbin, Bobby Lashley and Drew McIntyre. This was a good match, but not a great one. The main point of this match was simply for the emotional pop of seeing Roman Reigns again and the Shield back together. This match played out like a Greatest Hits of The Shield, with them hitting all the main spots they were known for.

This two-disk set comes with a number of extra matches and moments. From the Kickoff show we have a pretty good match between The New Day against Rusev and Shinsuke Nakamura. The teaming of Rusev and Shinsuke shouldn’t work, but it does. However, it does highlight just far down the card Shinsuke has fallen within a year.

There is a segment from Smackdown regarding Kofi going into Smackdown and Ronda on Raw. These are both fine, but I would have preferred more of the fallout with Becky Lynch being removed from Wrestlemania and the return of Roman Reigns which had more of an emotional impact on me when originally watching.

Fastlane could have been a good PPV. In fact, it has some great matches. The Triple Threat for the WWE Championship was fantastic and most of the matches are at least watchable. It is just a shame that at the end of the day this PPV meant nothing and with Wrestlemania just around the corner this didn’t so much set us on the road to the event, but make a detour through some rocky, dangerous fields on the road to nowhere.