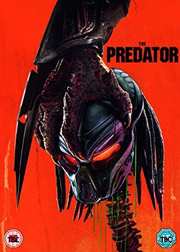 Review for The Predator

The Predator is one of the classic characters in the Science-Fiction world. It is generally agreed that the original 1987 film starring Arnold Schwarzenegger Predator is a masterpiece of the Action/Sci-Fi genre. The sequels are a little hit and miss, depending on your taste (though I personally enjoy them all). Thankfully, this new sequel ignores the awful Alien vs. Predator films, however, this is not to say that this is a great film.

After a Predator ship crashes on Earth, Quinn McKenna takes out the beast and is able to take away from of its equipment. Unsure what it is and knowing he would not be allowed to escape with it, he mails this to his wife before he is captured and shipped away with a group of other ex-military captives under the order of a government agent Will Traeger.

Traeger has captured the body of the Predator and brings in evolutionary biologist Casey Bracket to study it. Before she can start, the creature wakes and escapes, destroying many in its path. McKenna's son has discovered the package his Dad has sent and accidentally sends out a signal to another Predator ship. The team of convicts, escaping must figure out why the Predator is here and also take them out, before they take them out first.

I am so in two minds over this film. I will not say 'Well it's better than Aliens vs. Predator', because everyone knows that is a backhanded compliment. I will however say that this was not a terrible movie. It just wasn't a very good one either. The story felt so contrived and confusing that I just wish that someone had made just one more rewrite of the script. Whereas the original built up the tension to the creature, this one throws it at you in the first minute or so. It is almost like it says 'Well, you should have watched the last three films then. Go away watch them and come back.'

The acting throughout is fine in general, for what it is, though the lead played by Boyd Holbrook, was so boring and if they had hired someone a bit more dynamic then it might have been more interesting. I couldn't take Olivia Munn serious as the 'Evolutionary Biologist' and sad to say that even Jacob Tremblay (who was amazing in Room) seemed to be playing a caricature of someone with Asperger's. The only highlights were Sterling K. Brown as the shady Traeger and the rest of the ragtag group. At times I wished the film was just about them as Keegan-Michael Key and Thomas Jane are fantastic along with the others.

Throughout the film the action is R-Rated as Shane Black said it would be. However, it still felt like there was too much time spent when nothing was happening and then it was just a flurry of the Predator taking out multiple people in seconds. The whole part with the Predator-Dogs just made my head hurt. I don't recall these from the previous films, but it was just so ridiculous I couldn't take it seriously.

It was a nice touch that a lot of the effects were practical and that made the film feel more real and yet we see so much of the creature that he loses the mystique of the original. This is a shame as I had such high hopes for this film and everything that Black was saying about what he was creating and why seemed to point the franchise in the right direction. It is just a shame that by the end I didn't get the same feeling that I did from watching the first or even the second or third film. At the end I waited for the big 'Sequel tease' or something and unless I missed it there was nothing and that made me feel a little unsatisfied by the whole experience.

The DVD comes with a number of extra features. It is a shame after watching that Writer/Director Shane Black and some of the cast didn't contribute a commentary as they clearly had a love for the film which would have been interesting to have heard. Four Deleted Scenes (actually three and an alternate take) are fine, but the film doesn't lose anything for them not being there. Nettles' Outtakes was just a quick variation of the character trying to chat up Bracket with a number of silly options he said. It is a shame that the rumoured ending featuring Ripley from the Alien franchise is not included here as really that might have been a reason to be curious and buy it.

Predator Catch-Up is actually a quick ten minute smash cut of Predator, Predator 2 and Predators which was pretty well done. I am surprised that they didn't include any of the Aliens vs. Predator stuff, but also happy that they didn't also. Finally, there is a Gallery of Pre-Production and Production shots which is nice and can actually either be seen as a movie slideshow or one that you control, which is a nice touch.

The Predator should have been a return to glory for the franchise. This should have been on par with the original and it held so much promise that it would be so. In some ways if I had lowered my expectations I may have enjoyed the film a bit more, but that is not a good thing to say. If you are a fan of franchise, you will enjoy most of the film and some of it is very entertaining. I just don't think you will need to go out of your way to 'get to the chopper' to watch it.