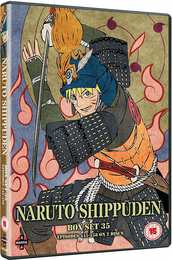 I had a brain fart that verged on a nightmare today. I put the first disc of this release in, saw that we’re beginning with episode 445, and for the life of me was convinced that there were 150 episodes of Naruto left to go. I did the math, and worked out that would be 12 volumes, another two years at least. I felt like crying. I don’t think I could outlive this franchise. It’s not until I started this review that I realised my mistake, that we’re actually down to the final 56 episodes, just four more volumes, and this is the last year before we probably move on to Boruto. But that is a sign that I have been watching too much of this show, that I’ve actually outgrown it over the last ten years. I suspect that these reviews will be like an engine sputtering to a halt as the fuel runs out, rather than a sprint finish. You might want to take these with a pinch of salt. 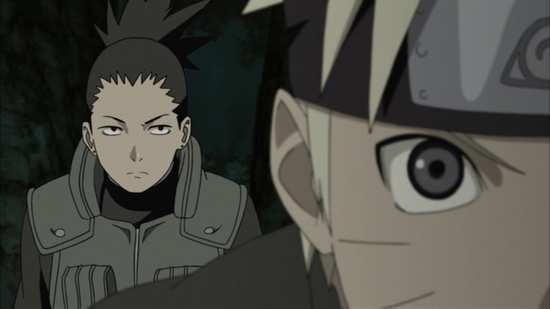 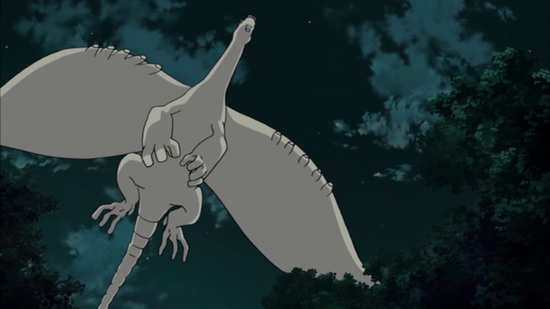 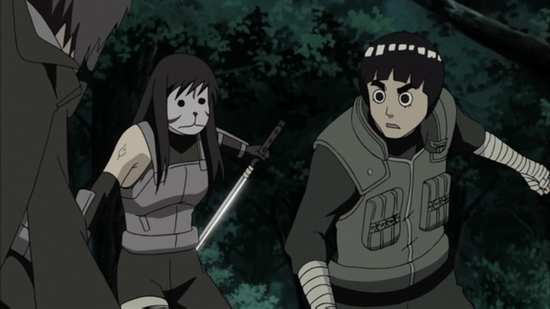 The fourth Ninja War is over! Madara has won and activated his Infinite Tsukuyomi. Now everyone is trapped in a perfect dream world, and as this collection begins, we’re in the middle of the Jiraiya Ninja Scrolls: The Tale of Naruto the Hero arc, an alternate world where neither Naruto nor Sasuke had the tragic upbringing that they originally had. 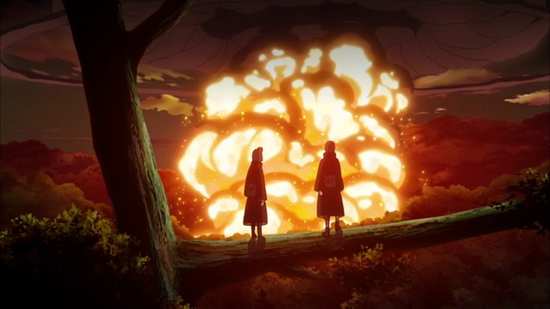 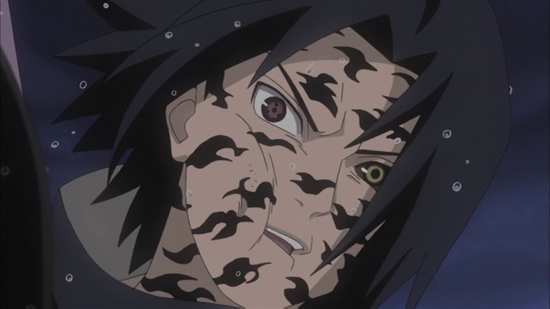 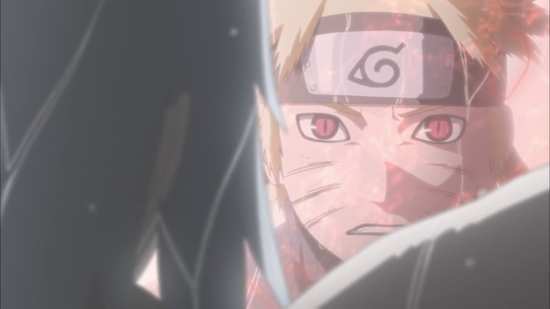 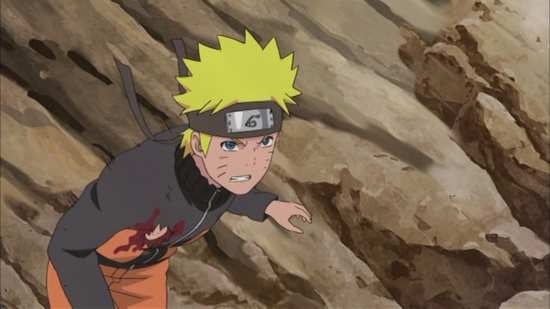 The DD 2.0 English and Japanese stereo is more than adequate in recreating the original experience, and given a little Prologic magic does offer a pleasant ambience and some discrete action. Yasuhara Takanashi takes over the music reins from Toshiro Masuda, and the result is if anything even less memorable than the music from the first series. But it works well enough in driving the action, and it doesn’t get overbearing. Once again, I only sampled the English dub and found it acceptable if unspectacular. It certainly isn’t the worst I have heard, but some of the actors don’t seem particularly suited to the characters. The volume levels are a little low, but the theme songs are subtitled. Disc 2 does suffer from a rather obvious and awkward layer change. 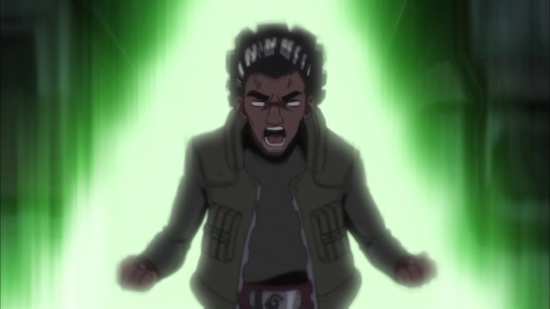 The extras haven’t changed much, the same static menus, with 5 Storyboard images, and 14 Production Art images all on disc 2, but this time Madman have delivered a different variety of trailers with their authoring. Following an antipiracy thank you, you can see trailers for Tales of Zestiria: The X, Mobile Suit Gundam: Iron Blooded Orphans S1, Fairy Tail Zero, and Grimgar: Ashes and Illusions. 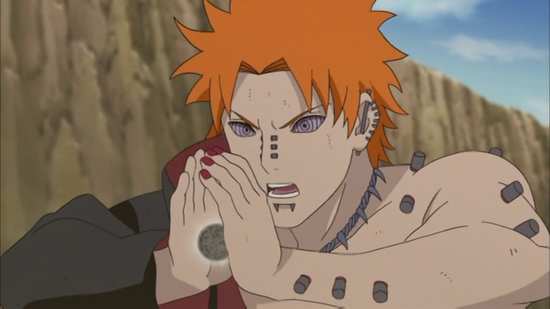 Is this what Naruto has come to? 13 and a half episodes of procrastination and half an episode of narrative gratification. You’d think that would mean that this is mostly filler, but the filler actually only lasts until episode 450, the animators’ alternate universe Naruto tale where Naruto and Sasuke had a much easier ride through their respective issues, and nowhere near as many people had to die. It’s the sort of content that gets made while the manga is yet to be written/drawn. Episode 451 is where the manga storyline resumes, but it’s not just the animators, mangaka Masashi Kishimoto is also in the mood to delay gratification, getting positively tantric over the next eight episodes as we get yet another flashback. 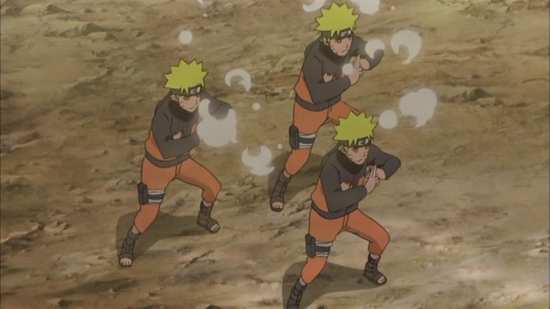 I mentioned in the previous review just how annoying The Tale of Naruto the Hero is, and that doesn’t change, as its conclusion here merely reinforces the suspicion that all of this 800-odd episode epic could have been condensed and told in just a measly 18 episodes. True, there is no longer any justification for Naruto to be such a rebel given that he has his loving parents, and at the same time, Sasuke’s character is less redeemable, not more, as he has little motivation in being so obnoxious, but otherwise, the story resolves itself quite satisfactorily here. 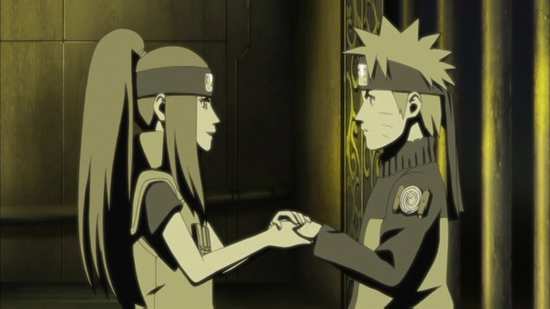 When we get back to the manga, it’s time for another flashback, as trapped in their little cocoon, safe from the Infinite Tsukuyomi, Sasuke has the time to reflect on his brother Itachi’s actions. That’s all that we need to trigger another multi-episode flashback that takes us to the final episode in this collection, a story arc that relates Itachi’s life. Sure there’s new information, and once again, Naruto does the Rashomon thing, presenting familiar events from another perspective. So we get to see why Itachi’s character was shaped the way it was, the events that drove a wedge between him and his clan. This time we see the slaughter of the Uchiha from his perspective, and we also get to see what happened after he joined the Akatsuki, some more background on that secretive group. I have to say that this was watchable, even more so than the filler arc that preceded it, but it is obviously biding time until we get back to the main storyline. 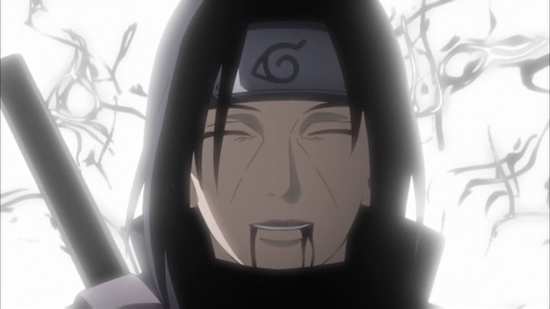 That happens in the last half of the final episode in this collection, and we get there in time for a game changing plot twist, that turns the whole story on its head once more. Naruto keeps on doing this. We get twenty or thirty episodes of filler and flashback, and then get a brief return to the main storyline where something momentous happens, and then we get to look forward to another stretch of filler and flashback before the next momentous event happens. At this point, I’ll have forgotten the last bit of current narrative before the next bit happens, and that is no way to watch a story. It’s like reading a novel, one page a year, every year on the same day. There are just two more stretches of filler left, nine episodes in total, but as the Itachi arc has taught us, Masashi Kishimoto can procrastinate with the best of them. I just hope that the final 33 canon episodes will satisfy.

The Itachi Light and Darkness story isn't technically manga material, but it falls somewhere in the grey area between canon and filler, in that it's actually adapting a couple of the light novels that released after (IIRC) the manga was over). So not written by Kishimoto and not part of the manga storyline, if still technically canon.

I hate to be the bearer of bad news, but the canon/manga material actually ends at episode 479, and the remainder up to and including 500 is a mixture of filler and more light novel adaptations. And there's some filler/padding thrown in for good measure before 479, too.

Sadly Shippuden ends with far more a whimper than a bang. I really hope we get a 'Kai' version of the show someday, because god damn, pretty much after the Pain arc (waaay back at episode 175) has been a painful slog of stop-start filler hell where we get drip-fed plot.
posted by MarkTeo1986 on 15/4/2019 18:37