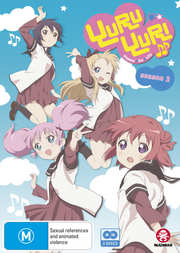 Where there’s a season 1 review, there will inevitably be a season 2 review, but if you’re waiting for a season 3 review, you’ll be waiting a long time. NISA who licensed the show in the US stopped releasing anime before they could get to the third season of Yuru Yuri, and Australia’s Madman Entertainment who released the show on DVD, simply ripped and downscaled NISA’s Region A locked Blu-rays. Without them, they’ll be left with the online streams to source English language materials, and while they have done so before for shows like Mushi-shi Season 2 and Rock Lee, the results haven’t been aesthetically pleasing. 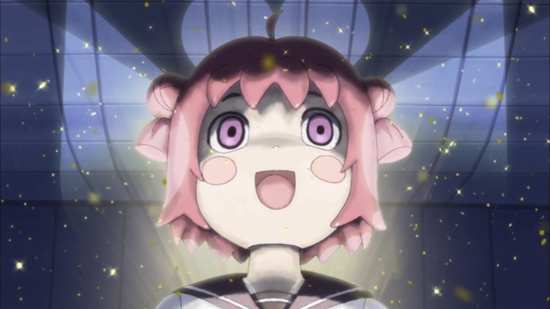 You might think that Akari Akaza will be the star of the show, starting middle school, traditionally late on her first day, rushing to school with a jam toast hanging from her mouth. She’s certainly been looking forward to middle school, to be reunited with her older friends Kyoko Toshino, and Yui Funami, and the first thing she does is join their “Amusement Club”. It’s in quotes, as what really happened was the Traditional Tea Club disbanded, and Yui and Kyoko appropriated the clubroom to waste time and hang out during breaks, lunch, and after school. And on day one, Chinatsu Yoshikawa walks in, looking for the Tea Club. Kyoko’s a fan of an anime character named Mirakurun, and Chinatsu is a dead ringer. It’s love at first sight, and Kyoko tries to get Chinatsu to join the club. Yui has to protect Chinatsu from Kyoko’s lascivious attentions, and establishes herself as Chinatsu’s Prince Charming. And so the love triangle is born, leaving Akari’s presence fading from the show... 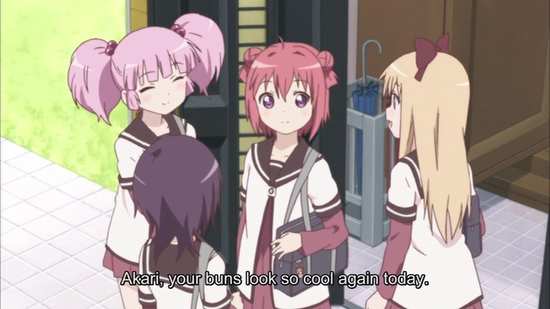 Season 2 continues the antics of the Amusement Club, and their interactions with the members of the Student Council. These episodes are set during the same year as the first season episodes. 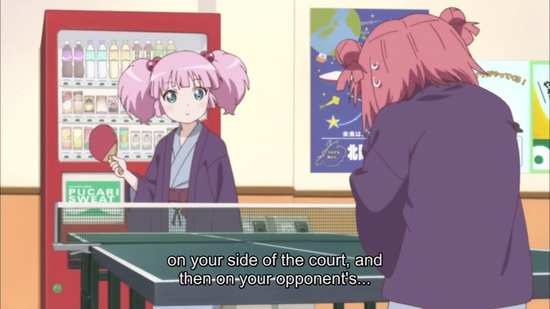 Disc 2
7. Sisters Circumstances and Such
8. Chinatsu vs. The World
9. The Day Something Might Happen or Might Not Happen
10. School Trip R
11. The Akari Who Leapt Through Time
12. Good-bye Main Character, Until We Meet Again 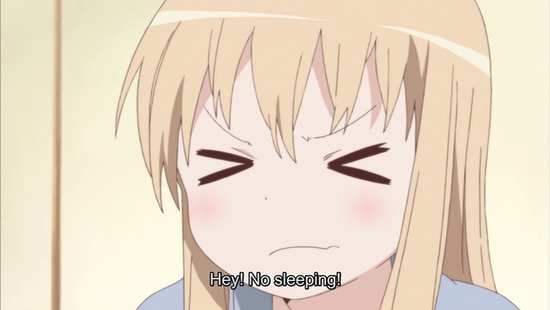 Yuru Yuri gets a 1.78:1 anamorphic NTSC transfer on these discs, progressively encoded by Madman Entertainment. As has been their habit of late, they’ve simply taken the NISA Blu-rays, ripped them and then encoded the episodes onto DVD, using NISA’s subtitle streams from the same, but burnt into the image. It works well enough, with the image clear and sharp, the animation smooth, and with decent levels of detail. You can’t help but wonder if the colours might have been crisper, detail levels stronger if they had encoded from genuine HD masters as used to be the case, but the show is watchable enough. 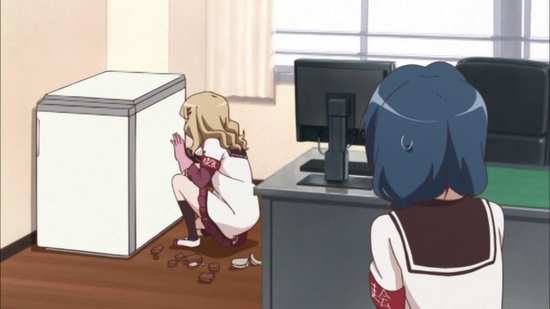 Yuru Yuri’s character designs and simple, but likeable and most importantly memorable, but the animator’s have free reign to let their imaginations go to work, to bring the show’s wacky and occasionally surreal humour across. This is a very inventive and creatively directed show. 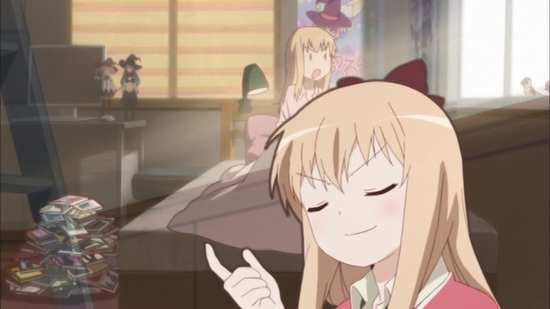 The disc gets a DD 2.0 Stereo Japanese track with the aforementioned burnt in subtitles, so it’s a good thing that they are accurately timed and free of typos. The dialogue is clear, and the voices suit the characters down to a tee. Yuru Yuri gets some nice theme tunes, and the incidental music is good as well, while the stereo brings the odd action packed moment across with clarity and a bit of separation. 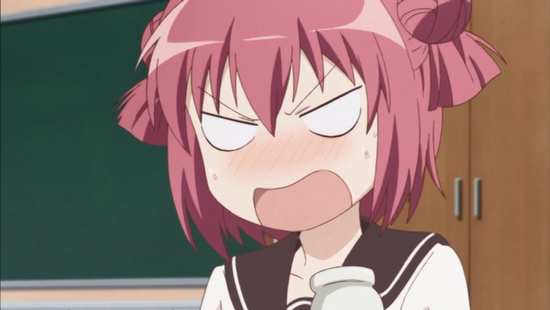 You get two discs in an Amaray case, with one on a central hinged panel. There’s some nice artwork on the inner sleeve featuring the eight main characters in party mode.

The discs present their contents with static menus, and the episodes listed numerically. 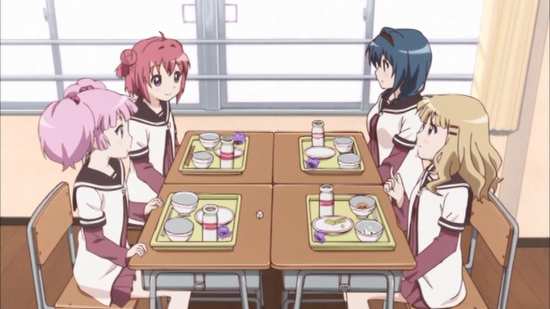 Disc 2 has the extras, and they comprise the textless credits, two of each, 2:56 of B-Side Episode Previews, and trailers for Your Lie In April, Shonen Hollywood – Holly Stage For 49, Rock Lee and his Ninja Pals, and Girlfriend Beta. 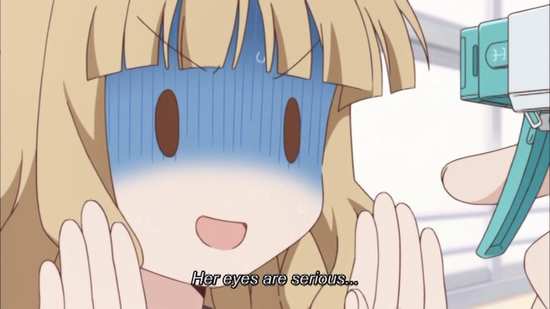 I think more of the same is the appropriate description for Yuru Yuri Season 2. These twelve episodes mostly coast on the momentum and goodwill generated by the first season, and that’s no bad thing. It’s also no bad thing that they continue to develop the running gags and characters in the show, although there might be the odd disappointment that they don’t do anything too radically innovative with this collection of episodes. About the funniest new gag is the horrific way that Chinatsu’s hair bunches devour anything that goes near them, ping pong balls, scrunched up bits of paper... 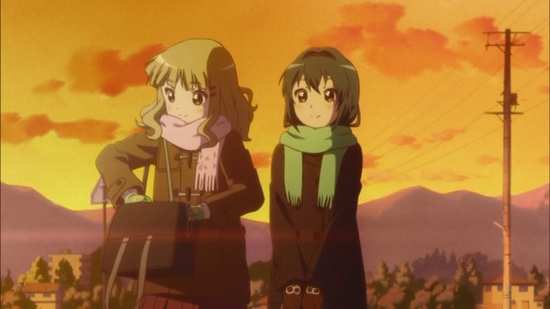 What season 2 does differently is in the character interactions. Season 1 was about the Chinatsu, Kyoko, and Yui triangle, it was about Ayano and Kyoko (with Chitose endangering her life with her fantasies of the pair), it was about Sakurako and Himawari’s love hate relationship, it was about Akari’s lack of presence. This time there’s more of a blending of characters. You might see an episode of Akari with Sakurako and Himawari, a story with Kyoko and Sakurako, Chinatsu with Himawari, Ayano and Yui, Chitose and Akari. Breaking the set patterns of the comedy and having different characters bounce off each other adds a lot of variety, but the disappointing thing is that the real comedy still lies in the patterns set by the first season. 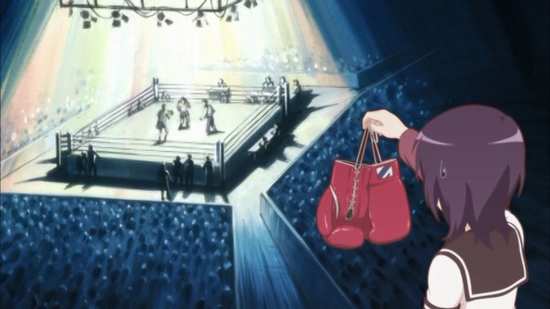 Yuru Yuri Season 2 is almost as funny as the first season, and some gags are even more spot-on this time around. It’s a little more uneven though, with a couple of gags falling flat. Worse, it also indulges that particular aspect of some anime that I just don’t get along with. In this season, the creepy obsession that Akari’s older sister has for her has more play than the mere hint that we got in the first season. We also meet Chinatsu’s older sister, contemporary of Akari’s sister, who goes into Chitose style fantasy mode at the thought of Akari and her sister. 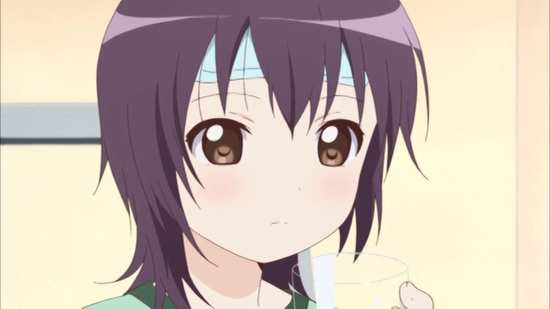 However, Season 2 does add a little something different into the mix, especially towards the end. School Trip R is another look at the 2nd Year school trip that took up an episode of Season 1, only this time we get to see what the first years got up to while Kyoko and Yui were away. There’s also a rather touching story in the penultimate episode with Akari given the opportunity to change her personal history, so that she’d no longer be the girl without presence. The final episode is set during the ubiquitous culture festival, with the girls in a performance of Snow White. This allows their character quirks to play out to the max in a theatrical setting, and actually feels totally refreshing as a result. Mathematically speaking, I’d say that Yuru Yuri Season 2 was about 95% as entertaining as the first season, and that’s still really good. I think I’ll head off to Crunchyroll now to watch Season 3 again, as long as they hold onto the licence.