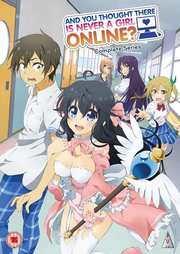 And You Thought There Is Never A Girl Online? Collection (DVD Details) 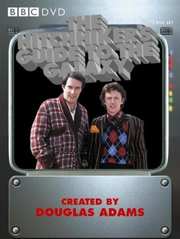 Review for And You Thought There Is Never A Girl Online? Collection

I’m a slow streamer. That isn’t a medical condition by the way; I’m talking about online streaming of anime. I watch a couple of episodes here and there when I get the time, and have so many series on the boil at any one time that it would take me less time to watch them broadcast. When Crunchyroll and Funimation tied up, and Funimation shows started appearing on the former’s site, the title that caught my eye was And You Thought There is Never A Girl Online? After all, Netoge (as it shall henceforth be referred to) made quite the splash among fans, so much so that it became a show that I was determined to watch. And while I was streaming it, one episode every few weeks, MVM announced that they had acquired the license. Barely two weeks after I had streamed the final episode, had the check discs arrived for review. I get to watch it all over again... I’d say in short order, but it took me almost a year to watch it the first time! Let’s see what Netoge looks like when watched in just six nights. 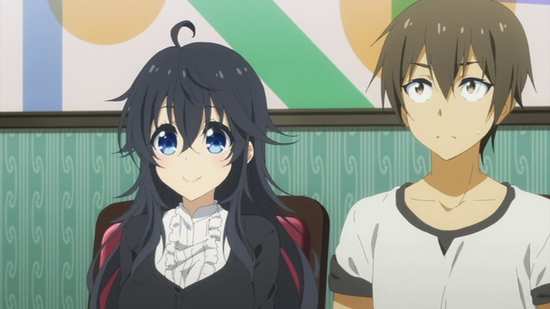 Hideki Nishimura loves online role-playing games. In fact he fell in love once, with a cute little cat-girl character called Nekohime, and in his knight avatar form Rusian, got down on one knee and proposed, only to learn that Nekohime’s player was a guy. Since then he’s decided to keep the game world and the real world utterly separate. That’s good because while he swore never to get that infatuated again, that didn’t stop a clumsy cleric named Ako latching onto him when he helped ‘her’ learn how to play the game, and eventually he let her wear him down into ‘marrying’ her as well... in the game that is. So now he, Ako, a swordsman named Schwein, and a beefy mage named Apricot adventure together in the evenings after school. 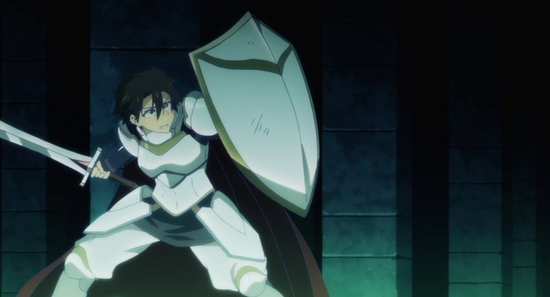 They’ve been playing together for a year, and then Apricot, the Master of their adventuring guild suggests an offline meet. Expecting the worst, Hideki goes to the cafe to learn that Ako really is a cute girl, a girl who gloms onto his arm at first meeting, and refuses to let go of her ‘husband’. What’s more, both Apricot and Schwein are girls too, and all three go to the same school as Nishimura. Akane Segawa (Schwein) is the cute princess in class who has always looked down at Hideki for being a total geek, and who is now mortified to learn that they have this connection, and that her secret geek life risks being exposed. Kyoh Goshoin is the student council president, and total rich kid (which explains her character Apricot’s premium value inventory and skillset). But the real issue is with Ako Tamaki, who is a habitual truant/social outcast/shut-in in the making, and who has just made her first three friends... only she can’t tell the difference between the game world and the real world. 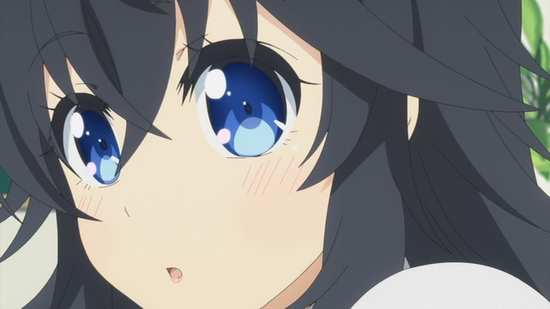 Kyoh has an idea which might help Hideki/Rusian deal with his new ‘wife’. She puts her family money into starting an after school club where they can play the game, Legendary Age. She believes that if they can see each other in real life while interacting on screen as avatars, Ako will start to see the difference between the game and reality. It’s never going to be that easy... 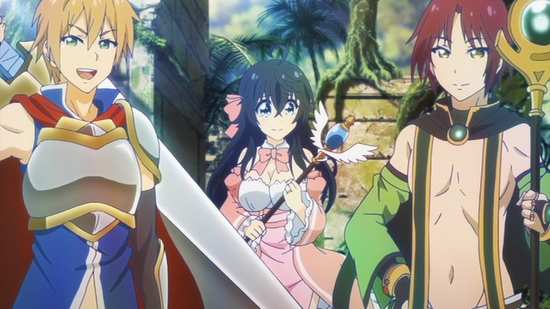 12 episodes of Netoge are presented across 2 DVDs from MVM.

Disc 1
1. And you thought there is never a girl online?
2. I thought we couldn’t play net games at school?
3. I thought net games and reality were different?
4. I thought her secret wasn’t going to get out?
5. I thought reincarnating would give me my big chance?
6. I thought if I declared my love, I was sure to succeed?
7. I thought if I went to the beach, I would become a normie?

Disc 2
8. I thought I was giving up being a net game husband?
9. I thought if we stayed over, we would get along better?
10. I thought we would do our best at the culture festival?
11. I thought we could win by delegating to others?
12. My net game wife is a girl online! 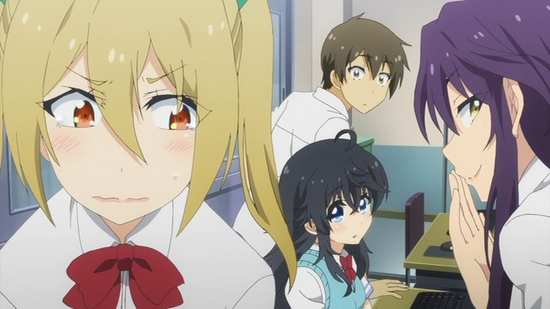 The show gets a 1.78:1 anamorphic NTSC progressive transfer on these DVDs. You get the Universal, Madman Entertainment and MVM logos on the disc, but for once, Madman haven’t completely re-authored the release as they have been apt to of late. These simply look like the Funimation discs with the region code changed. The image is clear and sharp, detail levels are good, and the animation comes across without noticeable compression or aliasing. The character designs are appealing and stylistically a little altered from the average anime, while the show does a good job of mixing up the real world and the online antics. 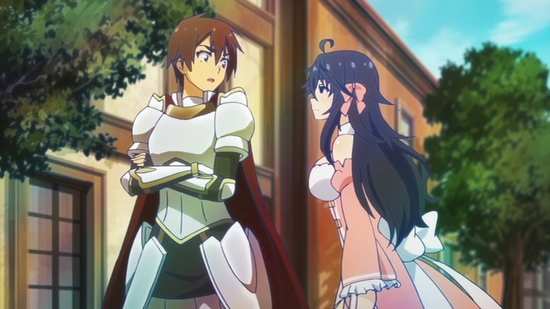 You have the choice between DD 2.0 Stereo English and Japanese with optional subtitles and a signs only track. I was happy with the original language track, with actors suited to their characters, and the stereo working just fine with the action and the music in what really is a comedy series. I gave the English dub a try and was faced with the rarity of the female cast not trying to emulate the pitch of the Japanese actresses, definitely a plus, even if the teenage girls sound more like women. The subtitles are accurately timed and are free of typos. 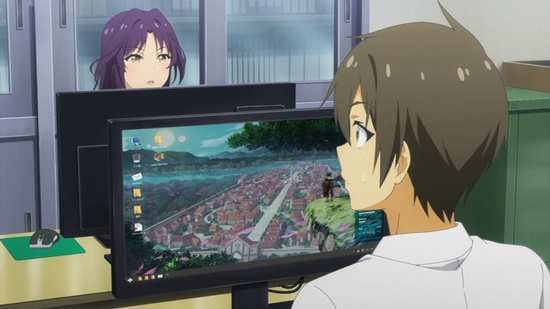 The discs present their content with static menus. There are no extras with this release. If you want extra features, you’ll have to get the Blu-ray. 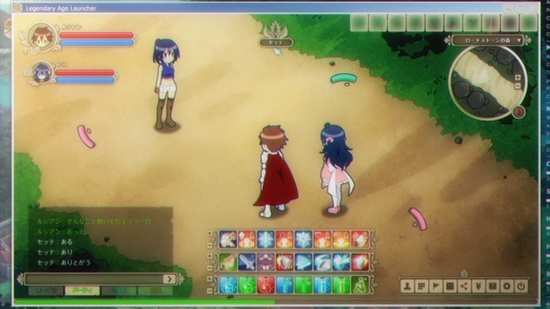 Netoge is a fun, entertaining romantic comedy with a twist, and aside from the usual oodles of fan service, it actually goes beyond the usual bounds of such shows, and offers some decent character growth and takes a light-hearted look at a real world issue. Social withdrawal has always been a problem, with people unable to fit in, through shyness or lack of social skills, choosing instead to define their worlds in other ways that don’t involve interacting with people. Online gaming offers the ultimate in social withdrawal, a world that makes ‘sense’, follows set rules, and with avatars which completely cloak and sublimate one’s identity. It’s no surprise that an online ‘life’ can feel more tangible than the real thing, as you have more control. Netoge looks at characters who have fallen into this belief, although one in particular more than the others. 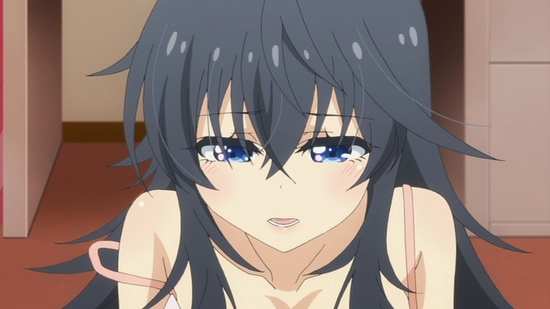 Akane/Schwein is on the surface the most balanced of the group, who lives two lives, the online swordfighter and the class princess, ridiculing other geeks as the latter, while adventuring with them after hours as the former. Yet even she chooses gaming over her real life. Kyoh Goshoin/Apricot/Master is the rich girl, the student council president, big girl on campus, but has no friends other than those she plays online with. Compared to that, Hideki Nishimura/Rusian is a pretty normal geek, recognised as such in class (looked down upon by Akane), and even he prefers playing Legendary Age to everyday life. He has developed a sense of detachment about it, after falling in love with another character, only to be told that the female character was played by a male. He sees the two worlds as separate. He may have sworn never to fall in love online again, but Ako wore him down and they ‘married’, but he keeps the character and whoever might be playing them as separate in his mind, and just goes with the flow. 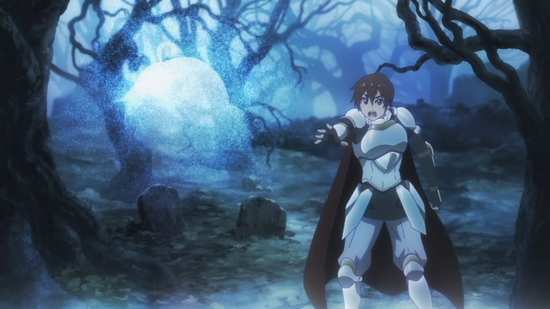 The show of course is about Ako, who suffers from the most extreme social withdrawal of the characters. Her whole life revolves around the game, and she can’t tell the difference between the game and the real world, to the point where she might try pointing and clicking, accessing her inventory during the day. She’s a pretty lousy player, despite her need for escapism, and where everyone else shunned her after seeing her lack of skill, Rusian had the patience to stick with her and help her learn how to play. Naturally she fell in love with him. When the Alley Cats Guild arrange to meet up in the real world, and Nishimura learns that he has been playing with schoolmates Ako, Kyoh, and Akane all along, Ako is thereafter stuck to his side like glue, convinced that they are married, just like their characters. 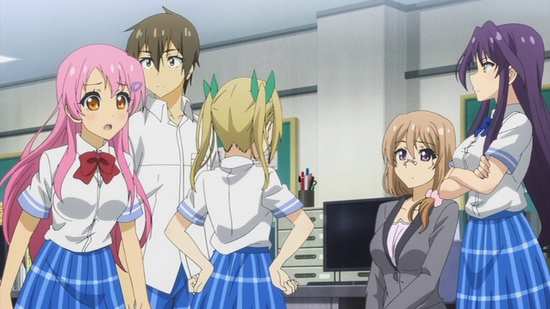 They start the after school club, not only to play the game together, but also to educate Ako in how the real world and the game world are separate. The twist is that as they get to know each other, Nishimura falls for Ako in reality. It’s hard work as Ako is particularly attached to her worldview. Progress is slow enough for the comedy to sustain through the episodes, and while Ako starts to come out of her shell and interact with people a bit more, the show still leaves enough unresolved in the hope of a second season. 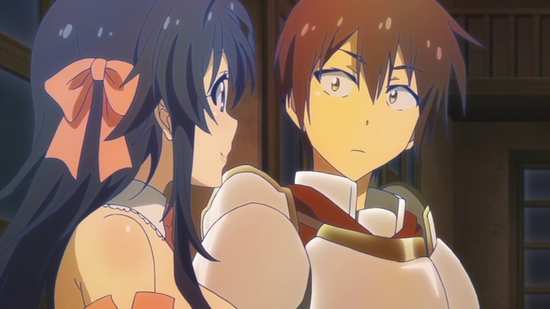 Generally, the structure of the series will be familiar, people coming together to start an after school club, the difficulty in getting an advisor, the summer camp, the beach episode, the school culture festival. The characters and the story hanging on this framework are unique enough to hold the interest though. There are also a few gaming issues that the show tackles to its credit, beyond that of gaming addiction. There’s an episode where Nishimura has his account hacked and his character stolen, we meet premium players who blow an unrealistic amount of money on in-game purchases, there’s the obnoxious expert gamers who take pleasure in destroying ‘noobs’, and RMT. The one thing that isn’t explicitly referenced is gamer-gate, but when you meet two girls who play the game as males, and people who are reluctant to reveal their gender, then the point is made. 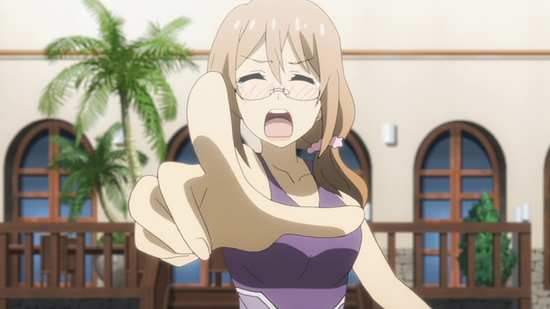 Netoge is a strong show with likeable characters, and a decent story, and about the only nit I have to pick with it is that it loses its way a tad with the final two episodes set during the culture festival, where the focus is more on achieving a goal within the game than it is in advancing Ako’s ‘rehabilitation’. But they are enjoyable episodes nevertheless. As always, why buy the DVD if you can play the Blu-rays? But if you can’t, these DVDs are of a decent enough standard.