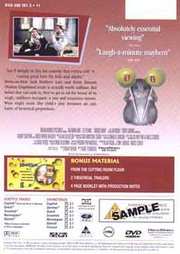 Back Cover of Mouse Hunt 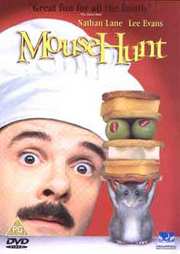 Synopsis:
You`ll delight in this hit comedy that critics call "a roaring good time for kids and adults."

Down-on-their luck brothers Lars and Ernie Smuntz (Nathan Lane and Lee Evans) don`t think much of the crumbling old mansion they inherit... until they discover that their dilapidated estate is worth millions. But before they can cash in, they`ve got to rid the house of its single, stubborn occupant: a tiny tenacious mouse. What might seem like child`s play becomes an epic battle of hysterical proportions.

This review is actually the R1 disk.

DreamWorks are clearly under way to beat Disney in their tracks with their family films and are even challenging Disney`s status with animated movies. "Mouse Hunt" was one of the studio`s early efforts to establish themselves as a major studio. It marked one of the first productions completely financed and owned by the studio, while most of the earlier films were co-productions with other Hollywood majors. DreamWorks Home Video release of 1998`s surprise hit "Mouse Hunt", a riotous comedy starring Nathan Lane, Lee Evans and... ... a mouse.

Lars and Ernie Schmuntz just ran out of luck in their jobs and family lives. Much to their dismay, they inherit their father`s run-down, inefficient old string factory. Seemingly worthless, they don`t exactly know what to do with it, and completely overlook another part of their heritage, a crumbling old mansion. In need of a roof over their heads, they move into the house. Immediately, a mouse starts to drive them crazy. They attempt to catch the mouse, but the tiny rodent constantly outsmarts the two brothers, wreaking havoc on their nerves and bodies. The two brothers call in an agent to have the house estimated for sale, but what they learn is more than they could have dreamed of. The mansion was designed by a world-famous architect in the late 1800s and turns out to be worth millions. The brothers set about to prepare an auction for the riches, intent to sell the mansion. First, however, they have to get rid of the mouse and that turns out to be the challenge of their lives. The mouse simply does not want to leave the house and now wreaks havoc not only on their nerves but also on the house`s entire interior. Every trick the two brothers pull off to outsmart the little rodent is countered by a disastrous awakening.
The film is a hysterical comedy full of silliness, and full-bodied slapstick humour, leaving little time to breathe. Nathan Lane and Lee Evans put in an unbelievable effort to act up against their tiny enemy, and only their performances of rather dim-witted, luckless brothers allow the mouse to show his superiority.

"Mouse Hunt" is a splendid disc to behold, it contains a full screen transfer of the film as well as a 1.85:1 aspect ratio anamorphic widescreen transfer. As I cannot stand pan`n`scan I will only comment on the anamorphic widescreen transfer. This deserves special mention as it is razor sharp and contains an incredible amount of detail. DreamWorks are using Warner`s Compression Centre to author their DVDs and you can see the experience and superior skills of the Warner`s technicians. There is no pixelation, no colour bleeding, nor chroma noise anywhere on this disc. Colours are vibrant with strong hues and deep shadows, without losing any of the original film material`s detail. The film boasts some very nice and elaborate sets, as well as carefully designed shots. It contains a vast number of effect shots that are scattered all over the film, ranging from use of a simple rod puppet all the way to self-contained Animatronics and computer generated images. This DVD, however, captures and reproduces the full magic of the film and brings it back to authentic life on your TV, leaving you to wonder which is the mouse and which the effect. The film contains a dynamic, playful score by Alan Silvestri. The English 5.1 channel Dolby Digital mix is very well produced with effective, though not overly aggressive, use of the split surrounds. "Mouse Hunt" comes in its English original version as well as French and Spanish language versions in Dolby Surround. The disc also contains optional English captions and Spanish subtitles, which are selectable from the disc`s funny, animated menu screen. DreamWorks have also put some extensive production notes, biographies, a number of theatrical trailers and deleted scenes on this disc.

"Mouse Hunt" is a truly delightful comedy for the whole family. It is one of those comedies that never give you the feeling that you are too old to watch it. The film works on different levels for different audiences. Some of the gags will only work for older viewers, while others are targeted at younger audiences. Don`t miss it or you`ll never find out exactly how string cheese was invented.
posted by Tony Myhill on 30/1/2002 20:18