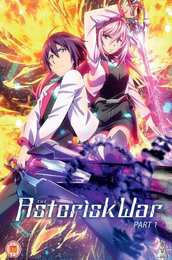 Review for The Asterisk War Part 1

I really need to stop getting my hopes up, especially when something is patently impossible. I saw The Asterisk War, but was put in mind of the Asterixian Wars, that little sojourn in Asterix and the Goths where the Gaulish warrior sent the Goths into a self-destructive frenzy by the judicious application of magic potion and a lot of politicking. The likelihood of a Japanese anime company making a series about the indomitable Gaul is remote enough to be unfeasible. But the hope lingers... 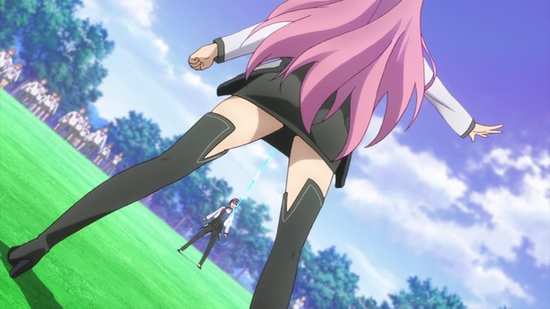 The reality... I pressed play and was pulled under by a wave of disappointment. Why can’t I just write the one review? If they keep making the same series over again, why do I have to write different reviews for each? If you’ve seen Infinite Stratos, Blade Dance of the Elementalers, Undefeated Bahamut Chronicle, Freezing or Absolute Duo, then you’ve seen The Asterisk War. An unlikely guy transfers into a school where students do battle with special abilities and/or giant robots to gain status. There’s a bit of a mystery. And most importantly, a harem will gather around the boy. I suppose I better see what, if anything is different or special about the Asterisk War Season 1, other than the fact that we’re getting the whole series in one affordable go; this was a wallet shattering Aniplex US release across the pond. 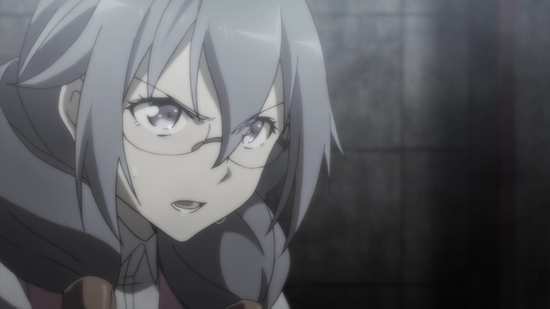 Years before, a disaster called Invertia changed the world. A new species of human arose, the Genestella, people with special powers. In the Academy City also known as Asterisk, six rival schools compete in the Festa battle tournaments, where super-powered students with arcane weapons battle for standing. Following the footsteps of his sister Haruka, who disappeared some time previously, a boy named Ayako Amagiri transfers in to Seidoukan Academy, and manages to get on the wrong side of the class princess, Julis before his first lesson. Naturally they wind up as partners in the tournament. But Ayato’s abilities are special indeed, even if he’s labouring against an unwanted legacy from his sister. 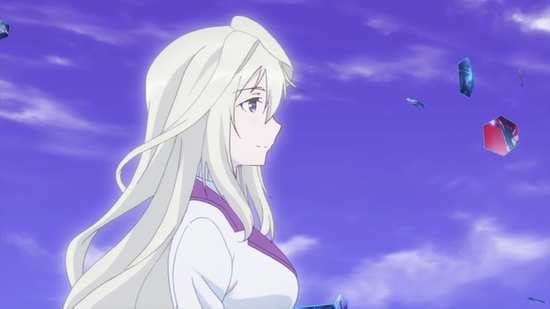 12 episodes of The Asterisk War Season 1 are presented across 2 DVDs from MVM. The show is also available on BD. 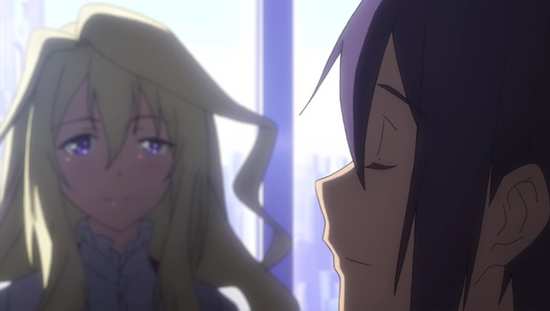 The Asterisk War gets a 1.78:1 anamorphic NTSC transfer on these DVD discs, and one more time... get the Blu-ray. Madman Entertainment have authored these discs and just as with Girlish Number, they’re cutting corners to cut costs. Originally companies would get shows on digital masters from Japan, from which they would create masters to author discs from, HD masters for Blu-ray and for DVD. The Asterisk War is a Blu-ray only release in the US, and what would have happened in the past when it came to releasing it on DVD in Australia and the UK, is that Madman would have used the HD master to create the DVD. Now they are apparently ripping the Blu-ray (judging by the BD quality burnt in subtitles), and downscaling that to SD resolution, and that is not the same. The picture quality suffers in the process, the image is soft, colours are muted, and detail is compromised. And yes, since The Asterisk War is a dual language release, this time the signs only track is burnt into the print, while the Japanese audio has optional translated subtitles generated by the player in a completely different font on top of all that. 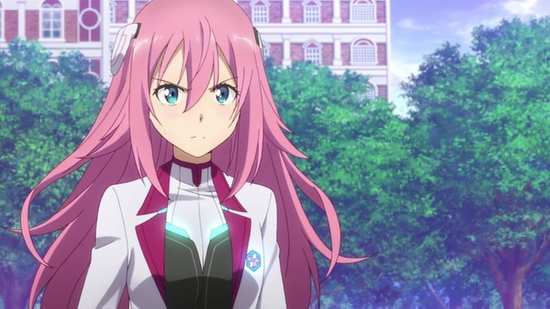 Anyway, the show is pretty enough to look at, with generic but appealing character designs, a nice shiny, future world design, and a lot of budget put into the eye-candy and action sequences. Of course this sort of harem show wouldn’t be complete without a bit of fan service, but it never goes over the top in this show. 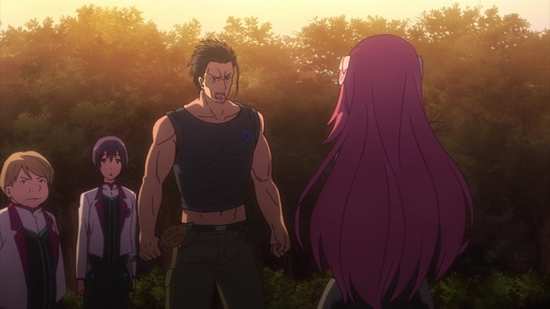 You have the choice between Dolby Digital 2.0 Stereo English and Japanese with optional translated subtitles. As mentioned, the signs track is burnt into the print for both versions. I was happy with the Japanese version, the actors suited to the appropriate character archetypes. The action comes across well, and the show gets some nice music, both to drive the action, and in terms of the theme songs. The subtitles are accurately timed and free of error, and I did little more than confirm that the dub exists, and can’t otherwise proffer an opinion on that. 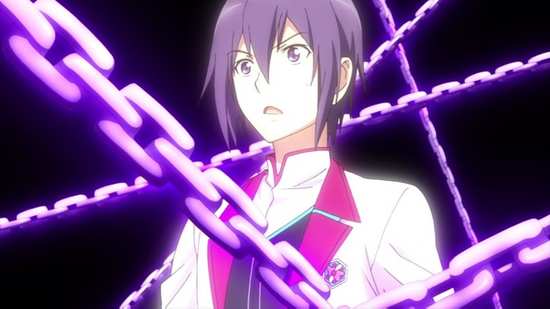 Disc 1 has the textless prologue from episode 1 running to 2:59, and trailers for Punch Line, Blood Blockade Battlefront, Trinity Seven, and Yurikuma Arashi. 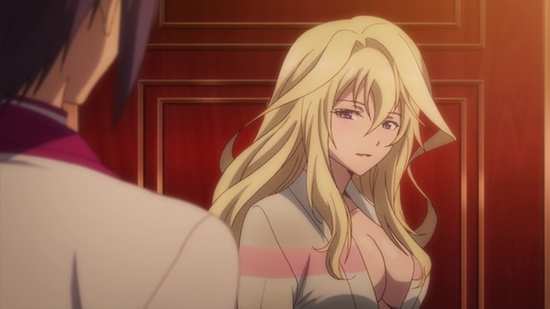 Disc 2 has the textless credits, one opening and three closings, as well as 9:20 of previews for the episodes.

Remember not to skip the end credits, as sometimes there is a post-credits scene that gets missed out that way. 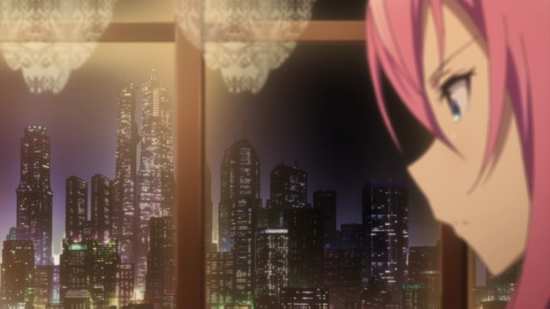 I’ve been reviewing Naruto releases for over ten years now, writing about the same thing again and again, so really reviewing The Asterisk War should be a doddle. It shouldn’t matter that they’ve remade the same story time and again, merely changing the faces and the voices, the setting and the jargon. But trying to put my thoughts together about The Asterisk War having seen all those shows that I mentioned in my introduction and more, which tell much the same story over and over again gives me a feeling of depression and ennui that I find hard to shake. 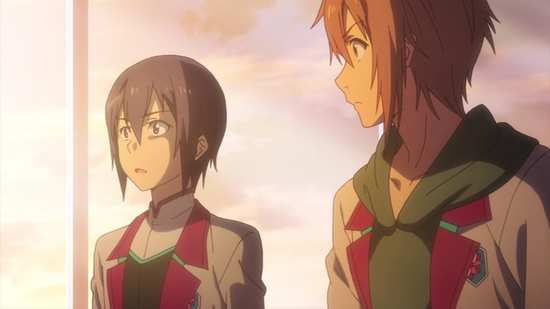 But I can easily say this much. The Asterisk War is the nicest version of the story that I have seen. Sure it has the fan service, and it has the action and intrigue, the plots and the nasty characters, but overall, the story is put together well, and the characters are nice, their interactions are pleasant, and when they aren’t doing battle, there’s a sense of pleasing fun about the whole thing. It’s as if they’ve taken the school battle genre and gave it a flavour of a slice-of-life show. Some shows have male protagonists who are gropey perverts, some shows have the kind of nastiness between the female characters that leaves a sour taste in the mouth (Freezing), and some shows really go all exploitavision with the fan service. The Asterisk War is likeable, possibly the most likeable of its genre. 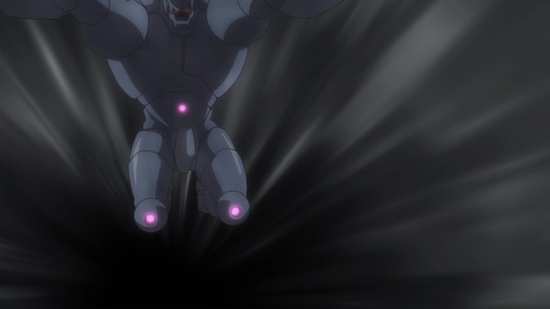 Likeable doesn’t equate to quality however, and for a show to stand out in such a crowded genre, it needs to do something special. The story in The Asterisk War is pretty much standard. A male protagonist joins a school, part of an academy of schools where the students do battle to determine their standing, as part of their training to use superpowers that parts of humanity have developed following a cataclysmic event. They’re becoming a new species, the Genestella. In this show, their powers manifest when they wield virtual weapons, usually blades (cue lightsaber sound effects – Asterisk War/Star Wars hardly subtle!), but for the truly gifted, they get Ogre-Lux weapons which are more elaborate and capable, some even carrying virtual firearms instead of blades. 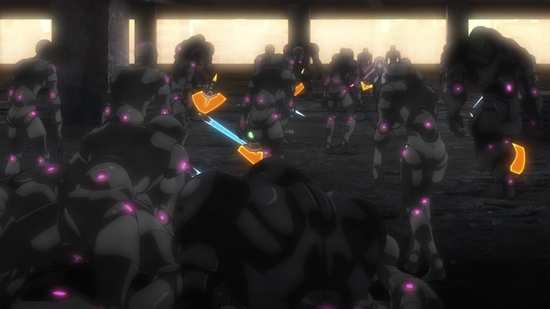 Ayato’s sister attended the Academy, but vanished under mysterious circumstances, although not before sealing Ayato’s abilities using her own powers. As it is, unlike anyone else, Ayato can only use his powers for a brief time before the seal reactivates, leaving him in agony. He says that he’s not there to investigate his sister’s disappearance, but we all know that’s a lie. He has a habit of encountering girls in compromising situations, such as when he meets school princess Julis in the opening episode. Julis is proud, independent, and quick to fly off the handle (all concealing a soft gooey centre), and following a bit of a duel, they wind up as partners in the upcoming Festa tournament. The emotionless blue-haired girl cliché is filled by Ayato’s childhood friend Saya (she’s the one with the guns), while the cute lilac-haired moeblob is Kirin. Add to that the demonstrative student council president Claudia, and you can see that Ayato gathers quite the harem over the episodes. 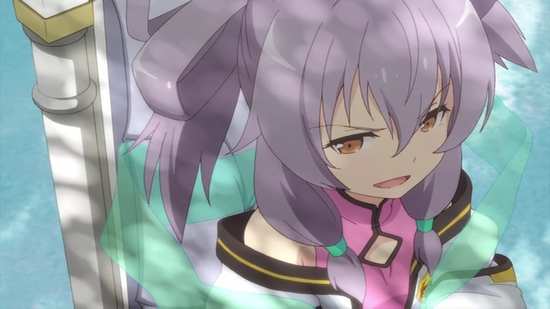 What’s interesting is that the characters all have powerful motivations behind their climb up the rankings. Ayato’s looking for someone to protect, and that turns out to be Julis, when he learns that she’s fighting to make money for an orphanage. Saya wants to prove that her father’s inventions aren’t crackpot (he makes the virtual guns that she uses and most people frown upon), while Kirin is trying to free her father from prison. 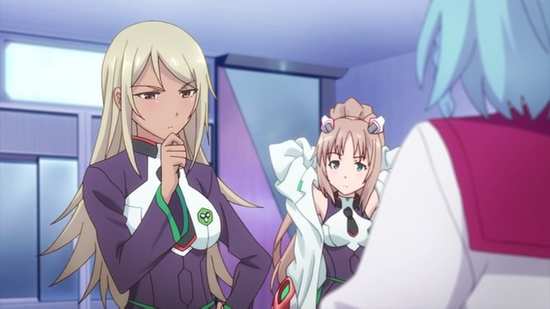 There’s plenty of politicking going on, as the various schools manoeuvre against each other in the tournaments. Shadowy figures abound, and secrets and lies are hinted at. There is certainly a bigger picture at play than what we see here, as the first season focuses more on introducing the characters, setting their relationships, and getting through the Phoenix Festa, the tag-team tournament that occupies the minds of the characters in these 12 episodes. But a lot of that final episode is a prelude to season 2, indicating higher stakes and greater revelations to come. 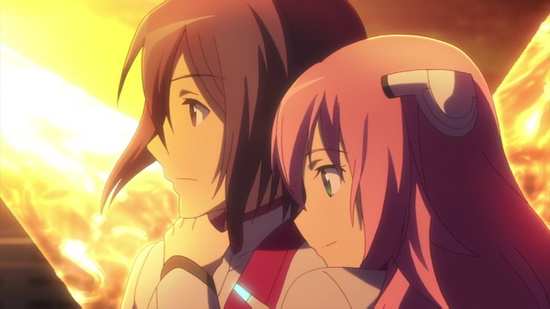 Well, that was unexpected. Once I started writing, the words flowed onto the screen pretty easily. I guess that there is enough that is different and enough to appreciate about The Asterisk War to justify another review. It’s true that most of these shows are interchangeable, that all that changes are the character nuances, and the technobabble/mythnobabble behind them. It’s just another glossary of made up terms to learn. But The Asterisk War is enjoyable, it’s fun to watch, and it doesn’t get too nasty, pervy, or fan servicey to put the viewer off. But once again, this Madman authored DVD is poor, and the Blu-ray is the preferable option.