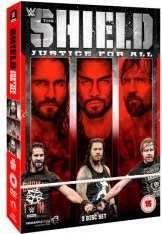 Blu-ray
WWE Destruction of The Shield

Review for WWE: Shield- Justice For All

Seth Rollins, Roman Reigns and Dean Ambrose are possibly the most important WWE Superstars in the past decade. Apart from John Cena and CM Punk, I can't think of any other people who have had such a collective impact on the business. Between them they have all won the WWE World , Intercontinental, US and Tag Team Championships as well as Rollins and Ambrose both winning Money in the Bank and Reigns winning the Royal Rumble with both Reigns and Rollins coming Number One in the PWI 500. You can love them or hate them and some people go back and forth on that one, but you can't deny the success of these three members of The Shield.

This set looks at the careers of the three since their infamous and shocking split in 2014. My biggest issue with this set is I wish when WWE would make a set like this that they would decide 'To Kayfabe or not to Kayfabe'. I have no issue with either way, but this set jumped back and forth where they were talking in character and then out of character that I had whiplash from it all.

As always this is one of those talk match talk match things and my biggest issue is that they decide to dedicate a disk each member. Again, this should be fine, but all it says to me is that this is the only way that Dean Ambrose would ever get a spotlight on a WWE DVD. Rollins has already had his set (no doubt Roman's will be coming soon) and it was only Ambrose who was forgotten about. It also means that the timeline is all up in the air.

His WWE Championship match against Triple H at Roadblock 2016 could have been amazing and really should have been until we got to the end which was such a cheap move. Shame. Money in the Bank 2016 should be amazing and in some ways it is, but of course I know who won and so this feels a little odd watching back. It had some amazing moments, as they always do, but the fact they don't follow it up with him cashing in his Money in the Bank is just bizarre. Makes me even more feel that this should have been told linearly as this match is later on the Seth Rollins section.

The Triple Threat between the three at Battleground 2016 is just as perfect as I remember and I was surprised by how much I enjoyed this and the ending was just amazing. As is Ambrose and Rollins teaming again to go against Sheamus and Cesaro from No Mercy 2017 which was just a fantastic tag match between both of these teams.

The Seth Rollins disk is probably the best in regards to all round wrestling. His match against Roman Reigns at Money in the Bank 2016 is great, not just because of the cash in afterwards. This was one of the few times I have enjoyed watching Reigns, but mainly because it was seeing him get beat. His match against Triple H at Wrestlemania 33 is a great match and certainly shows why he was so deserving of his main event spot.

This leads to the reforming of The Shield which felt more like an admission that as singles they failed somewhat and really the reforming didn't work (or wasn't given a chance due to injuries).

Forgetting that, there is a fantastic Gauntlet match from Raw with Seth Rollins against Roman Reigns, Elias and John Cena and it showed just how great as a technical wrestler Rollins is. Finally, from Rollins (I guess) it is his match against The Miz and Finn Balor at Wrestlemania 34. This was one of my highlights from the event and I said that if this had been the main event and had been for the WWE title I would have ended that event happily.

But that was not to be as we save the worst for last with a disk dedicated to Roman Reigns. For this, we have to go back in time (again why not do this linearly and make this time line make sense?) with a match between Roman Reigns and Dean Ambrose from Survivor Series 2015. I am still not sure whether I enjoyed what happened with this match or not. In some ways I am and in some ways it was cheap.

They include both his Wrestlemania matches against Triple H at 32 and Undertaker at 33. Now, 32 I will just say was too little too late. If WWE had been smart and put the belt on Ambrose (see his match at Roadblock) this could have been interesting. Instead it was just, as I say, too little too late. His match against The Undertaker is still one of the worst matches I have ever seen. The match and outcome did nothing for either of the two and in fact made most fans horrified at the thought that it would be Roman Reigns who would retire The Dead Man.

His match against John Cena at No Mercy 2017 really needed more a build for it to mean anything. This should have been a passing of the torch moment, but as we found out at Wrestlemania no one wants Roman Reigns to carry the torch so not sure why they rushed with this one. Reigns then says 'I want to put a chokehold on my legacy'? What does that even mean? If you put a chokehold on something you effectively kill it. Is that what Reigns wants to do?

They don't include his awful match against Brock Lesnar at Wrestlemania 34, instead they include the even worse match against him at The Greatest Royal Rumble. This match was just awful, coupled with an ending so bad that they had to cover up the mistake with the referee admitting he made a mistake on Twitter? However, I am glad that WWE still knows how to disappoint me... by letting Roman go on last.

The Shield: Justice For All, really should be called 'Justice For Some a Trip Back and Forth in Time'. I found this such an uneven set and though there is nothing wrong with the content it is how it is presented that I have an issue with. By having a disk for each member of the Shield meant that the timeline was all over the place and it made no sense to show Dean Ambrose win the Money in the Bank (then see a vignette of him cashing it in) only to have to wait until Seth Rollin's disk to actually watch it properly.

The set is filled with great matches, when they involve Dean Ambrose and Seth Rollins. It seems like Roman Reigns is only able to be entertaining when he is either teaming or against these two. If I'm honest I could have easily skipped the last disk which was just WWE telling us that Reigns is the man for the future... despite the fact that most fans boo him out of the building.
If you are a fan of any of the three then you will enjoy the disk for the most part. Even I have to admit there are some fantastic matches on here. It just feels as though this was set up for The Shield's reunion and when that didn't happen they just cobbled together this set and I really do believe that.