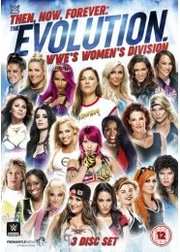 Review for THEN, NOW, FOREVER: THE EVOLUTION OF WWE'S WOMEN'S DIVISION

The women’s revolution in the WWE is possibly one of the greatest things that ever happened in the last few years. For years, if you go back and read my reviews of any women’s matches prior to this and the usual phrases would be ‘a mess’, ‘boring’ and usually focusing more on the attractiveness of the female and pity about the lack of wrestling skill. It seemed that for every one amazing female worker there were many more who were clearly only hired for their looks. Sometimes this worked, such as Trish Stratus, but most of the time it failed badly.

This set looks at the evolution of the women in WWE from the early days of Wendi Richter, through to the attempt to build up the division in the mid-90s which failed despite the great work by Alundra Blayze. By the end of the 90s and through most of the 2000s the Attitude and emergence of The Divas was more a focus on looks, especially with the yearly embarrassing Diva Search competition. However, during this time a number of great workers did emerge such as Trish Stratus, Lita, Victoria and Mickie James.

By the end of the decade despite the continuing focus on looks, there was a shift and this was started by the likes of AJ Lee and Kaitlyn and the work of the women in NXT. Within NXT women such as Paige, Charlotte, Sasha Banks, Becky Lynch and Bayley among others became often the best thing on the show.

The set is essentially a talk match, talk match set and you know my feelings towards them. Personally, I would have preferred a more indepth look at the evolution of women’s wrestling with the matches as an extra. One of the reasons (my gripe with most of these types) is often during the talking, the match and its outcome is revealed and so why should I bother watching it? The issue with this is also that many women are overlooked or skimmed over too quickly with the only spotlight segments on the following:

Only two matches featuring The Fabulous Moolah and no spotlight on her. This is not surprising considering the awful stories about how she treated people that have been revealed. There is also no spotlight on significant females such as Sunny, Chyna and Sable. I can understand not looking at Chyna and Sunny considering their X-rated past, but it is surprising that they don’t look at the sheer global impact that Sable had (especially seeing as she is married to Brock Lesnar).

Of those who do get a spotlight there are only two main ones who are missing. First is Michelle McCool. Seeing as she was the only Diva Search contestant who went on to have a credible career, becoming a champion and even winning the PWI Top 50 Woman in 2010 (also surprising seeing her being married to The Undertaker). Second is Asuka and despite including her on the front cover and including her Royal Rumble win it is surprising they don’t take a look at how important she was in NXT and beyond.

Of the 22 Matches I would say that there are a good selection across the years and although I refuse to believe there was not one good match between 2006 and 2013 it was obvious that the focus would be on the early 2000 Trish Stratus era and the emergence of the NXT women from 2014 onwards. Of the matches, highlights include the Survivor Series Match from 1987 which was an interesting match, not fabulous (no pun intended) or sensational (again no pun intended), but certainly watchable for the time.

Trish Stratus’s three matches include one against Victoria, her main event of Raw against Lita and great Wrestlemania 22 match against Mickie James are all great examples of just why most people consider her the best when it comes to an all-round performer. Lita’s Cage match with Victoria was also a great example of women doing what is traditionally a men’s match and even doing it better.

Molly Holly against Victoria in the Wrestlemania 20 match where she had her head shaved was great, but it was ruined by her ‘Spotlight’ section which spoilt the entire match, but at the time it was amazing to watch.

Despite having a brief Spotlight, it is not surprising that AJ Lee is more or less ignored, though I am surprised they don’t include her match against Paige or her Wrestlemania 30 match. However, her match against Kaitlyn is great, though nothing memorable beyond her win.

From NXT we have three matches which are all great, though the best (and best of the set in general) is the Iron Man match between Bayley and Sasha Banks which was the best ever women’s match and one of the best matches of all time even winning the PWI Match of the Year 2015.

With the brand split Raw and Smackdown got their own titles and both matches to crown them are great. The triple threat between Charlotte, Sasha Banks and Becky Lynch is a wonderful match. However, I was also impressed with everyone involved in the Smackdown Six-Pack match which had a wonderful ending.

The glass ceiling was shattered with the number of firsts the women then went on to do. Charlotte and Sasha Banks went on to take part in the first women’s Hell in a Cell and also the first ever PPV Main event. Now taken out of the context of the hot-potatoing of the women’s title this was a great moment. Along with this we had Asuka’s amazing performance (alongside everyone else) in the first women’s Royal Rumble and Alexa Bliss in the first women’s Elimination Chamber. It is just a shame they also included the awful second Money in the Bank match. WWE didn’t listen to the fans who didn’t want Carmella to win this and went ahead with the awfulness (though it is not as bad as the original, which was one of the worst matches of the year).

Finally, the end with the Kurt Angle and Ronda Rousey vs. Triple H and Stephanie McMahon match from Wrestlemania 34. My biggest issue with this match is that every other Spotlight was specific and a shoot or real, whereas all they did was lift the worked promo they used for the event and I really wanted to hear from Ronda for real and not as part of the show. This is a shame and personally it seems too soon to look at Ronda after only one match when others belonged on here.

Then, Now, Forever - The Evolution Of WWE's Women's Division should have been a monumental set. It should have been a wonderful full length documentary about how the women have developed. Instead it feels lazy. If you have watched the Channel 4 documentary about to build to Charlotte and Sasha Banks' Hell in a Cell you will wonder why they didn’t just pay for the rights and release that alongside the matches.

The matches are fantastic and there are very few that are missing, but so much more could have been done to make this the set that it should be. If you want a brief look at how great the women could be and how far they have come then this is the set for you, but I do wish more had been made and it could have been so much better.