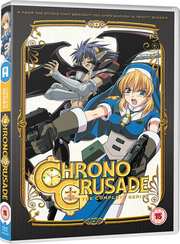 In 2003, Studio Gonzo made two historical fantasy anime, Peacemaker Kurogane, set in 1860s Kyoto about the Shinsengumi, and Chrono Crusade about a combat exorcist nun and her devil partner in 1920s New York. ADV licensed and dubbed both of them, releasing them in the US and the UK. Then subsequently, when ADV went out of business, Funimation picked up the licences and re-released them in the US. Now in 2018, All the Anime are releasing both series again in the UK. If the anime industry could be said to have a set of conjoined twins, it’s Peacemaker Kurogane and Chrono Crusade. I’ve just recently reviewed Peacemaker Kurogane, so it’s practically incumbent on me to review Chrono Crusade. 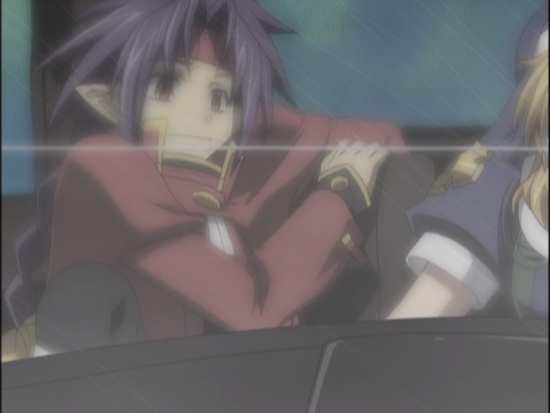 Rosette Christopher is a nun on a mission. She’s part of the Magdalene Order in New York, 1928, and it’s their duty to defeat the devil menace in the city that has arisen with the fast pace of human development at the turn of the century. But Rosette is unique in that she has a contract with a devil named Chrono to help her. Chrono’s powers are unleashed when Rosette lifts the seal, draining her life in exchange. Things get really serious when they encounter Azmaria Hendric, an ‘apostle’, one of the children that heard the Fatima prophecy, and were gifted miraculous powers. The devils would love to have those powers, especially one lethal devil named Aion with an apocalyptic vision. And if that isn’t enough, Rosette’s searching for her missing brother Joshua... 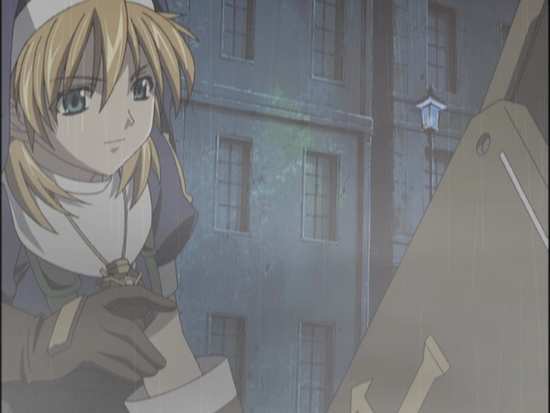 24 episodes of Chrono Crusade are presented across 4 DVD discs from All the Anime. 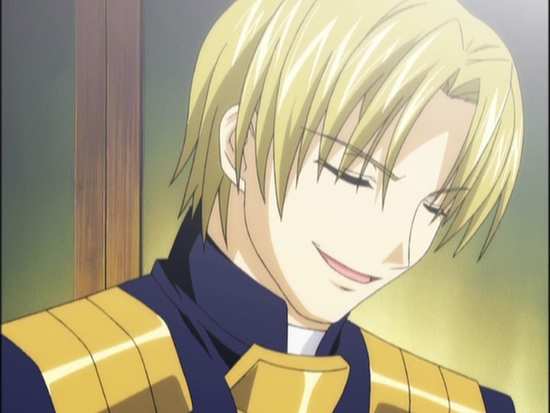 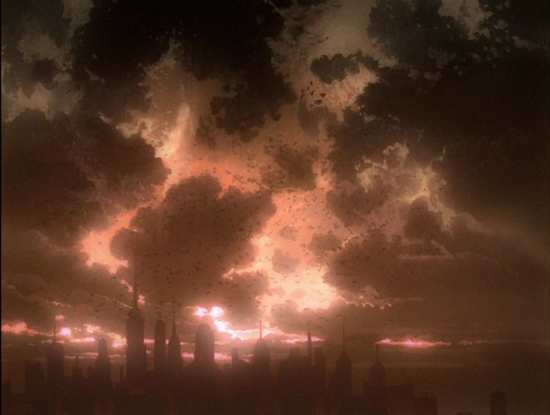 I have a confession to make. In between upgrading from dial-up to broadband, and Crunchyroll going legit, I fell to the dark side and other-means-ed a handful of anime that I had not watched on DVD, most of them ADV titles which were at the time scarce in my collection. One of those titles was Chrono Crusade. It looked horrible streamed, ripped from DVDs and roughly encoded, to be streamed at less than a megabit connection, a tiny resolution box that looked even worse when full-screened. 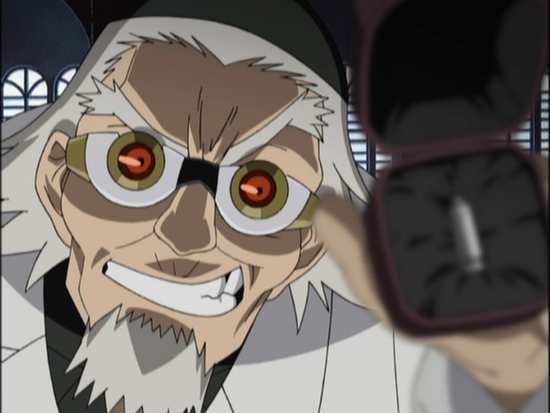 Now I have seen Chrono Crusade on DVD, a professional, 4:3 NTSC transfer on these dual layer discs, albeit up-scaled on a flat panel HD display. It looks horrible, almost as bad as those illicit streams. It’s not so much the quality of the transfer, which is up to Funimation’s usual standards, although in this case the US distro tendency to pump the gamma levels up a notch may have had a more deleterious effect on the colour balance than usual. It’s the source material which is the problem. Studio Gonzo animated Chrono Crusade, and the first thing that strikes you is the low resolution nature of the show. It actually looks as if it was animated at less than 480i and scaled up. Gonzo have also gone overboard with the mist and haze effects. They had this tendency of applying a little softness and haze to their animations to give them a sense of atmosphere, but here, most of Chrono Crusade is an impenetrable mess. I haven’t seen an anime on DVD look this bad in years! 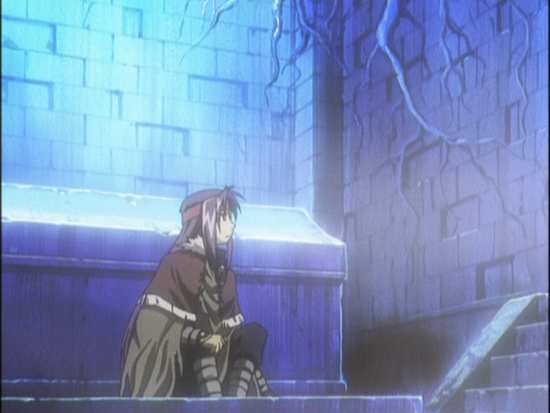 I love the end theme to Chrono Crusade. The opening isn’t too bad either. What we have here are Dolby Digital 5.1 Surround English, and 2.0 Stereo Japanese audio tracks with optional translated subtitles and a signs only track. I merely checked on the dub’s existence and instead stuck with the original language track. It sounds fine, the action comes across well, the music suits the story, and the actors are suited to their roles. The subtitles are timed accurately and are free of typos. 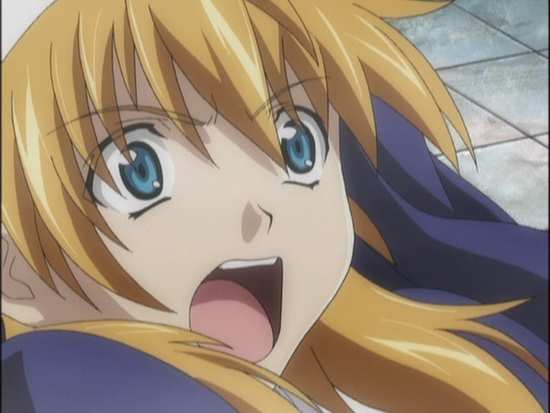 The discs boot to static menus, and display jacket pictures when at rest in compatible players.

Disc 1 autoplays with a trailer for Evangelion 2.22

You’ll find an audio commentary on episode 1 with ADR Director Matt Greenfield, Hillary Haag (Rosette), and Greg Ayres (Chrono). It’s probably just me, but I always find these ADV audio commentaries so much more interesting, and when we come down to it, bearable compared to the Funimation commentaries. 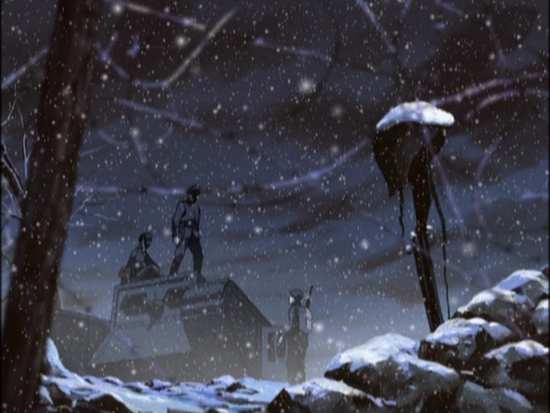 Disc 2 autoplays with a trailer for Eden of the East: The King of Eden, and has an audio commentary with episode 10, with Matt Greenfield this time accompanied by Chris Patton (Joshua).

Disc 3 autoplays with a trailer for Fullmetal Alchemist Brotherhood Part 3.

Disc 4 autoplays with a trailer for D. Gray Man Season 2, and it’s here you’ll find the rest of the extra features 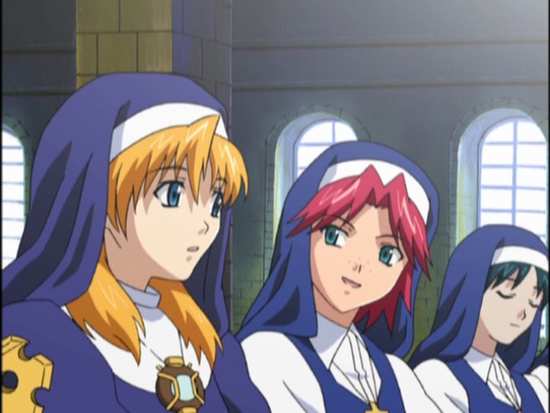 Azmaria’s Extra Classes are short animations featuring the apostle side-kick from the show, explaining various aspects of the story and the characters. There are seven in all, running to a total of 37:58.

You get plenty of textless credit sequences, both DVD versions and broadcast versions. 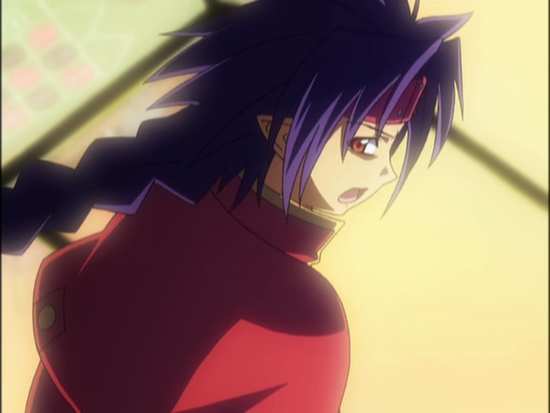 There are four things that I remember about Chrono Crusade. The first is ‘nuns with guns’. That’s a combination that will light up any anime fan’s eyes. The second is directly related to the first, which is of course anime’s askew view of Christianity, that allows for far-fetched stories like Chrono Crusade, or indeed Hellsing Ultimate. The third thing that I remember is that ending, which I won’t spoil here for those fifteen of you who are yet to watch this show. It was an atypically downbeat conclusion in a fantasy action genre that usually went for the big ‘splosions and eye-candy. The fourth thing I recall is just how popular Chrono Crusade was among fans, with memes, avatars and user names inspired by the show dominating fan forums around its initial release. And when it came to releasing the show, ADV had more than one shot at it, with at least three versions of complete collections (you had to be picky to get the one with the best extra feature count). 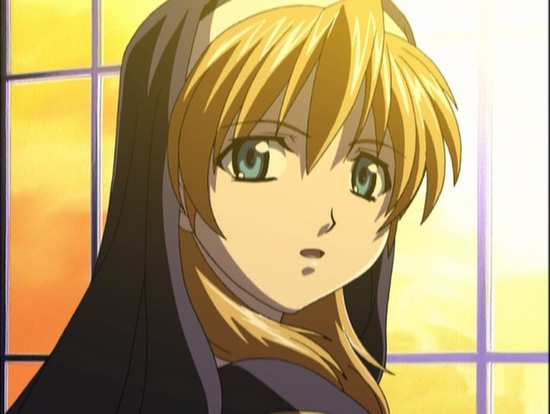 What I didn’t remember about Chrono Crusade is that it’s not actually that good. It’s pretty bad when I think about it, although how much of that is due to having aged badly is another question. Certainly the genre mish-mash of those mid-2000s fantasy action shows from studio Gonzo really stands out today, as a feature of their conveyer belt approach to scripting these shows. What gets me most about this show is how Rosette Christopher appears to have had a personality transplant from Slayers’ Lina Inverse. She’s got the same attitude, the same loudness, the same approach to eating, and the same streak of obnoxious independence. It’s not good for a show to constantly remind me of a better, and easily accessible show in my collection, as the urge to press eject and watch Slayers instead becomes insurmountable as the show grinds on. Let’s face it, Chrono is no Gourry, and Azmaria is no Amelia. 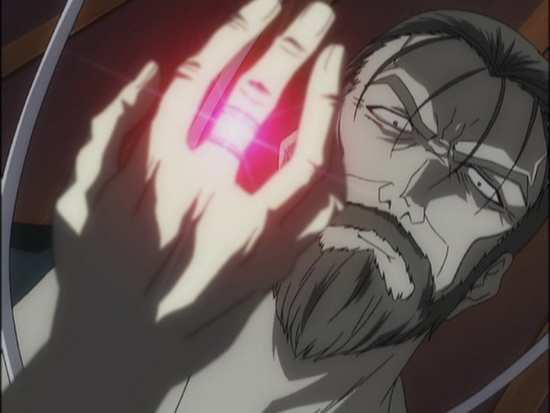 It begins with a young nun carrying a big gun, and her nice and friendly devil partner, hunting down evil devils in 1928 New York. The nuns of the Magdalene Order are tasked by the church to stop evil entering the world, and in the 1920s most of that evil is of the occult sort. It turns out to be a little more complicated than that, as Rosette Christopher’s contract with Chrono is frowned upon by the Order. Years before, Rosette and her brother Joshua were exploring near their orphanage when they discovered and befriended Chrono. But then another devil named Aion, Chrono’s former friend, showed up and kidnapped Joshua. That’s why Rosette partnered with Chrono and joined the Order, to find her brother. 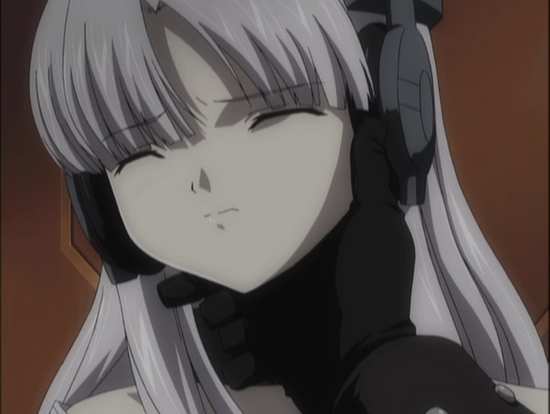 Aion and Chrono have a history too, they once tried to overturn the established hierarchy and obtain their freedom, and like every devil worth his name, Aion has a grudge against God. He wants to turn hell into Earth and vice versa. When Rosette and Chrono discover Azmaria, an Apostle that heard the Fatima prophecies, the pieces begin to fall into place. Aion wants the Apostles for himself; it turns out that Joshua is one, and he’ll use them to obtain his goals. And it won’t be pretty for the human race. 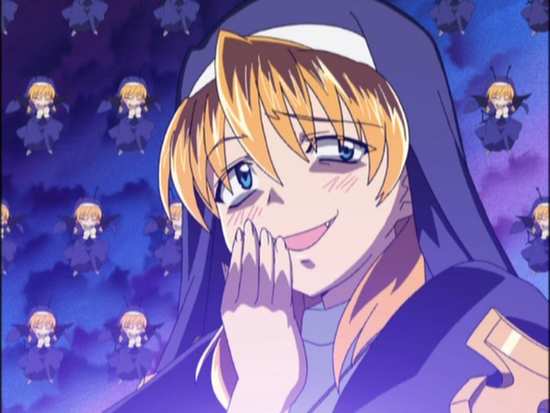 It should work. Maybe it did work when it was first released, after all something as universal as the mythological battle between good and evil, heaven, hell and Earth is practically the oldest story out there, while playing with the concept of the church is fun, even when done as weirdly as Japanese anime tends to do. But Chrono Crusade feels dull, and even boring in the way that it executes its story. Maybe it’s the characters, ciphers and clichés at the best of times. There’s even a dirty old man character, a Q for the Magdalene Order, creating their anti-devil weaponry, who loves to grope young nuns. Maybe it’s Gonzo’s storytelling style; light comedy feeling out of place in what should be a dark and chilling story. It even has time for a Christmas episode, which follows Azmaria on her mission to earn enough money to buy her friends Christmas presents. The first time I saw this particular storyline in Love Hina, I enjoyed it. Little did I know that it’s the stock Christmas episode script that every anime uses. I’m surprised that there isn’t a 'nuns in bikinis on the beach' episode! 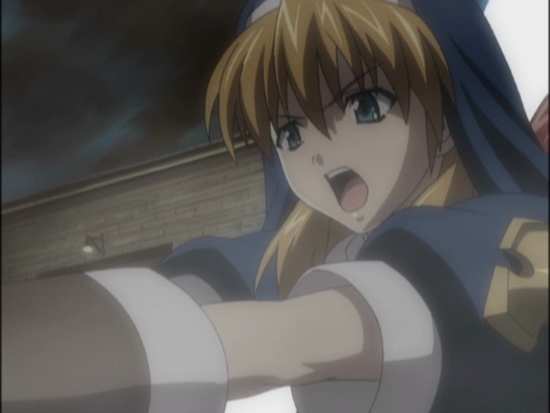 The light comedy just doesn’t gel well with how dark the story gets. Later on in the series, a ‘Jewel Witch’ named Satella is introduced, who has a grudge against all devils for the loss of her family, and like Rosette, a particular grudge against Aion. Her story doesn’t end too well, and she’s not the only one. Chrono Crusade’s overarching story is downbeat and dark in a way that is wholly at odds with the storytelling style. But, this was Gonzo anime production back in 2003. Most of their shows had the same storytelling style. 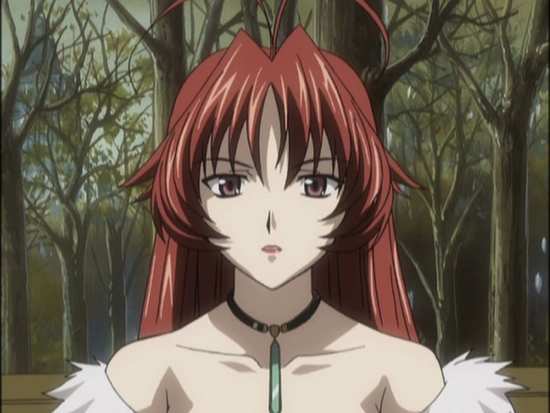 There is a decent story beneath all this, but I doubt it’s worth the effort to discover it. If you liked Chrono Crusade back in the day, rediscovery will probably be more painless, but the visuals just haven’t aged well by any measure. I think Chrono Crusade might be one story that’s worth a new interpretation for the HD age.