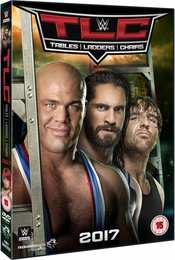 TLC this year was an odd event. In some ways it is the best example of WWE booking on the fly and without any thought and because of this it gave us two of the best moments and matches of the year. However, it also feels a little same old same old when it comes to the things that they actually put some work into.

This PPV featured 7 matches (8 including the Kickoff show) and thankfully they did not go the route of having a Tables, Chairs etc. match and just had the one TLC match as the main event. The event kicked off with the WWE debut of NXT’s undefeated Asuka against Emma. Now, I will not say this is a bad match, it’s not, it’s just not very good either. Asuka was amazing, but Emma was the wrong opponent for her debut and maybe this should have been against someone else. However, Asuka showed why she is a big deal and hopefully WWE can build on this.

Cedric Alexander and Rich Swann vs. Gentleman Jack Gallagher and The Brian Kendrick really should have been on the Kickoff show. It had no business being here and yes it was exciting, but as soon as the match finished I remembered nothing from it. This had no impact on me or indeed on the Cruiserweight division. Should have been more.

Alexa Bliss against Mickie James had a fantastic build and I was so glad that this match happened and I enjoyed it. It was given enough time to breathe and I really am enjoying how Bliss is holding the women’s division at the moment. Great to see Mickie James and though all the ‘Grandma’ insults were a little low, when you look as great as Mickie does it makes no difference.
Kalisto against Enzo for the Cruiserweight belt was a pathetic match, but I didn’t expect anything else. I do hope that something can be done to save Enzo as once the crowd get tired of his promo he will have nothing else. It is a shame as Kalisto is exactly who should be carrying the 205 Live show, but not to be.

Finn Balor was originally meant to be facing Bray Wyatt, but due to an illness he had to pull out. We all benefitted from this with the addition of Smackdown’s AJ Styles in a Dream Match. This was match of the night for me and I can’t wait for these two to be able to face again for more and for lengthier battles. Both looked outstanding and this was definitely a time when WWE booked on the fly and came up with gold.

Which is more than can be said for Jason Jordan against Elias. A nothing match that didn’t do anything for either of them.

Finally, the Main Event was supposed to be the reformed The Shield, but again the mystery illness took Roman Reigns out of the equation and so in stepped Kurt Angle!?!

Yes, after nearly a decade and after being inducted into the Hall of Fame early in the year our Olympic hero, the multi-time World Champion, his first match in WWE since 2006 and one that many of us thought we would never see.

This match was fantastic. Everyone in the match brought everything and though I ddin’t really understand why the two teams were feuding, it all made sense. The whole ‘handicap’ element made the match seem a little lopsided, but both teams made it work. The whole thing with Braun Strowman was fantastic and it was just great to see Kurt Angle in the ring showing why he is generally regarded as the best to ever come into the business.

As a bonus feature they included the Kickoff match between Sasha Banks and Alicia Fox which was actually a good match, not amazing or memorable, but certainly worth a watch. I was surprised, seeing as this was the first time Kurt Angle has wrestled in WWE for over a decade that they didn’t have any interviews or featurettes regarding this. Hopefully, they do something like this for the future.

TLC 2017 was a good PPV and I enjoyed most of it, but as with most WWE PPVs recently, for every amazing match there was one that was utterly skippable. I can’t really recommend it based on two matches and maybe if this had been a double pack coupled with another PPV it would have been worthwhile. Instead, this set should have shown more respect to just why Angle being back in that ring was so important. Instead, it felt like it was just any other match, which it certainly wasn’t and that is a shame.