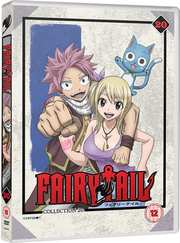 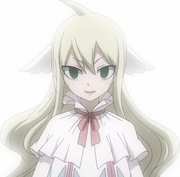 I’m feeling a little sheepish. I heralded the arrival of Part 19 of Fairy Tail on DVD with a whinge about missing extra features, referencing Funimation’s tendency to have extras as Blu-ray exclusives on most of their current combo releases. I thought it was the new way of doing things, leaving UK fans at a disadvantage, as Fairy Tail is DVD only here. But here comes Part 20, and the extras are back on the DVD discs. In retrospect, it’s probably more down to Part 19 being a 14 episode release instead of the usual 12 or 13. Normal service resumes here, and it’s a good thing too, as we’ve come out of our last, long stretch of filler, and from this point until the end of the series, it’s canon material all the way, aside from a couple of random filler episodes here and there. 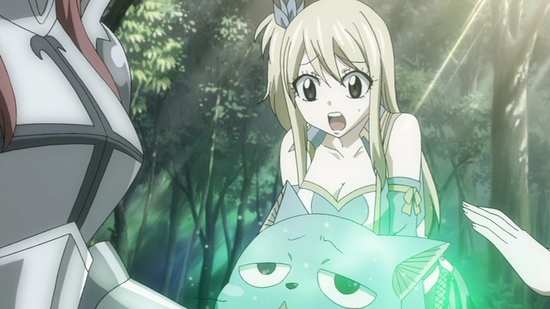 The canon material resumes, but before the next big arc, Natsu and Gray are specifically requested for a mission to help rescue a village frozen in a strange form of ice. 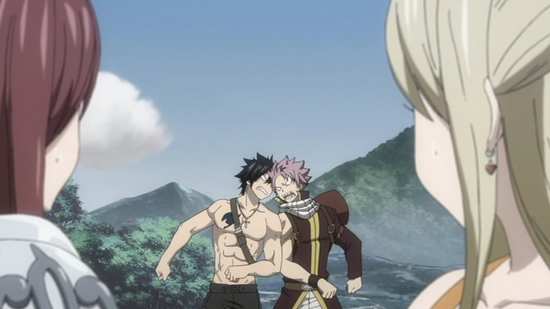 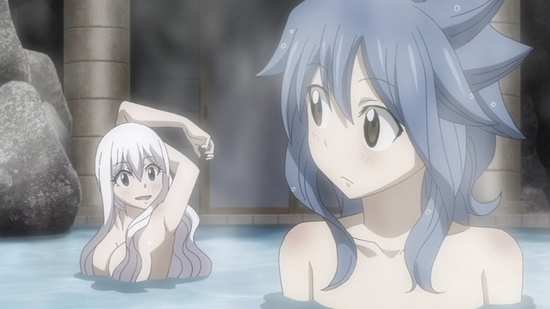 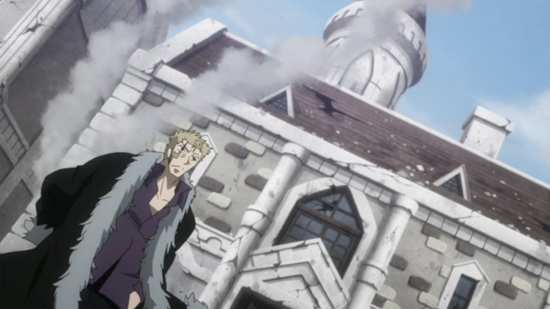 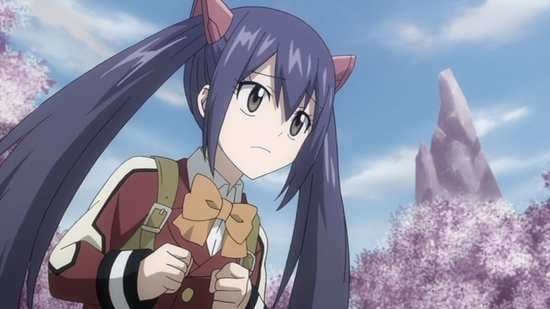 The discs present their content with static menus and jacket pictures. Disc 1 autoplays with a trailer for Funimation NOW.

Disc 2 autoplays with a trailer for The Boy and the Beast. 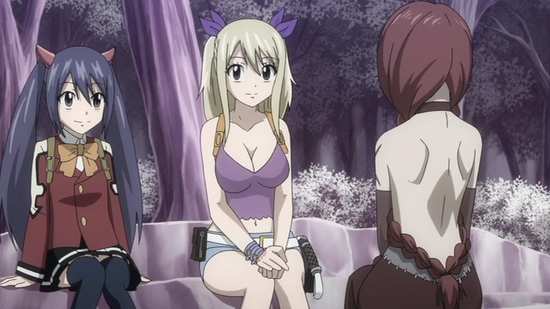 The Guild Pride featurette this time looks at Fairy Tail, for 6:56, but if you don’t know that guild by now, you’re definitely watching the wrong show.

You get on textless opening, 6 textless closings, the US Trailer, and further trailers for The Girl Who Leapt Through Time, Gonna be the Twin-Tail!!, Yona of the Dawn, Selector Spread WIXOSS, Lucky Star, Assassination Classroom, and Shonen Hollywood – Holly Stage for 49 –. 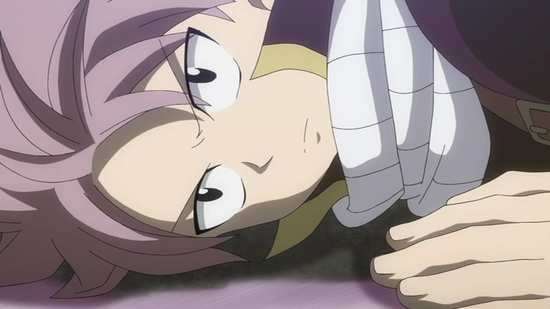 We’re back to normal, canon Fairy Tail service in this collection, albeit with one minor sticking point. The show eases us back in however, with a seven episode arc that offers the usual light comedy/action/drama with no little heart, without getting too heavy with the narrative, forcing you to take notes for twenty episodes down the line. The story with the frozen giants’ village is short and sweet, and reminded me of all that I love about this series. Mission accomplished, the Tartaros arc proper started, with four episodes of prologue before kicking off the storyline that will take us to the end of this Fairy Tail anime series, some two collections hence. And as always, it’s early days as to which way the story will go, whether or not the series will go out on a strong note. 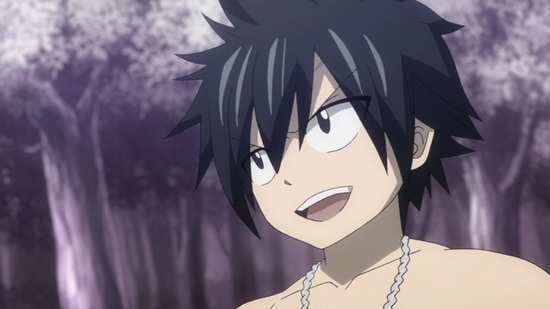 First is that mission to Sun Village, frozen along with its gargantuan inhabitants in a strange form of magical ice, so impervious to other methods that Natsu and Gray are specifically requested for this mission. To stop them from constantly fighting with each other, Lucy, Wendy, and Erza join them, along with Happy and Charle. What they find is a village that is also now the target of a guild of opportunistic treasure hunters, as well as a dark guild, so not only must the Fairy Tail wizards free the village from the ice spell, but they have to fight the treasure hunters and the evil wizards as well. There’s a call back to the previous story arc, when one of the dark wizards is revealed to be Minerva, formerly of Sabertooth, but now teamed up with a demon called Doriate in the Succubus Eye guild. On the other hand, Flare makes a reappearance, a long haired wizard from the Raven Tail guild who previously gave Lucy a hard time in the Magical Games tournament, but who it turns out comes from Sun Village, and wants to help Fairy Tail rescue her adoptive family from the ice. 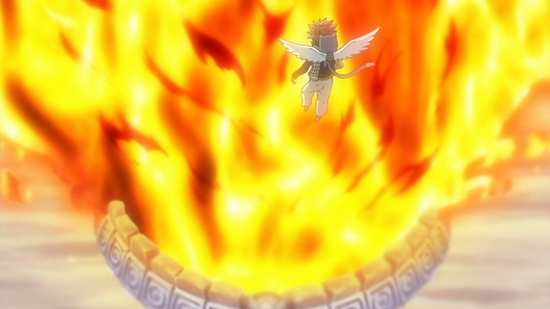 The fate of Minerva, and the source of the ice sealing Sun Village all lead into the Tartaros arc, which begins with a Jar Jar Binks trigger warning, “Yousa people gonna die?” The wizards’ lives are indeed on the line here, as Fairy Tail gets as dark and as ominous as it has ever been, beginning with some major, and irreversible changes to the magical world as the Tartaros dark guild make their presence felt. The thing about Tartaros is that its members aren’t exactly wizards as we know them, they don’t even use magic, they use demonic curses, and that instantly has our heroes on the back foot, as Tartaros launches a devastating attack on the Magical Council Era. 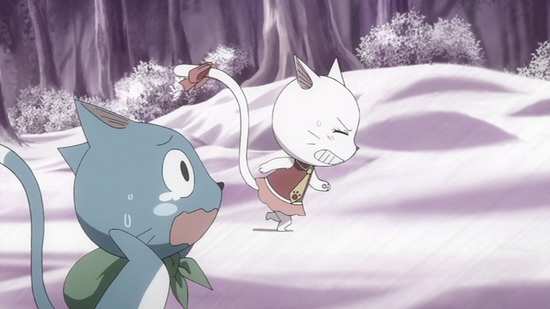 Tartaros wants the Magical Council’s secrets, and if they can get them, every magic user in Fiore will be at a disadvantage, unable to stop Tartaros’ rampage against humanity, and the opening four episodes of the prologue merely serve to underline just how tough this new enemy is, and to what lengths they will go to achieve their goals. At the end of the prologue, Fairy Tail come up with a plan to act against Tartaros, but that is immediately undone when it transpires that there has been a traitor in the Magical Council working against them. As this collection closes, it’s quite the cliff-hanger, with Natsu, Erza, Lisanna and Mirajane captive of Tartaros, and one of Fairy Tail’s own turned traitor, bringing a weapon into their midst. 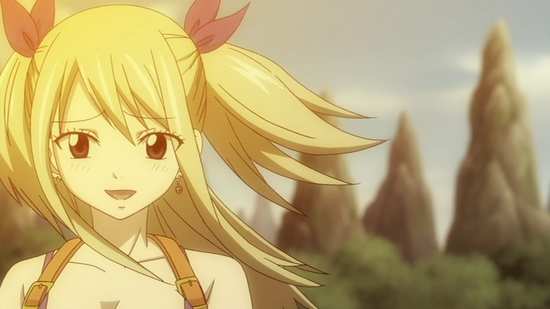 I’m enjoying Fairy Tail again; it’s nice to see the manga balance between action, comedy and heart restored, but there is that one sticking point I did mention earlier. It’s the recaps at the head of each episode, between four and six minutes long each time, useful if you’re watching one episode a week, but tedious and pace-slowing if you’re binge watching, and I feel they are the longest they’ve ever been in Fairy Tail, an attempt to really stretch this material out until the end.