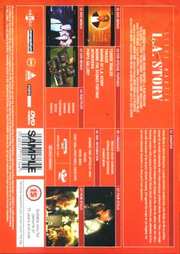 Back Cover of LA Story

DVD
And Justice for All (UK)
Related Articles 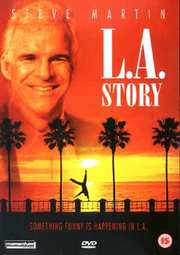 Synopsis:
Steve Martin is Harris Telemacher, a wacky television weatherman, who thinks his life is perfect, except for an erratic relationship with a style-conscious girlfriend (Mirilu Henner). Then, one bright and smoggy L.A. day, an electronic freeway sign changes his life, when its advice leads him into a frivolous romance with a young and beautiful blonde (Sarah Jessica Parker) and, ultimately, to true love with the woman of his dreams (Victoria Tennant).

Set against the magic of Los Angeles, it`s "like" the most hilariously romantic `L.A. Story` you`ll ever experience.

Steve Martin`s tribute to his native L.A.
It kind of helps if you`ve been there, to understand some of the in jokes, but then I guess Californians have never been that strong on subtlety, so probably not. By jove, some of it is close to irony, which I thought in the U.S. was the next best thing to metally.

The Plot
The plot is sort of incidental really, although there is one. To me its just a film highlighting the southern californian culture (I can here Woody Allen now - "California`s only contribution to culture is being able to make a right turn off a red light"). I hadn`t made the connection between this film and Annie Hall before I read the other review - duh obvious now.

I can`t help but be amused the whole way through. Its not necessarily the laugh out loud humour, but a constant series of funny observations.
I mean, we cover earthquakes (is this a 5? No more like 4), freeway shooting season, colonic irrigation, low frequency booming times, resteraunt booking, the "Good evening, I`ll be your mugger for tonight", arriving early for lunch, speakerphones, snow in LA?, an evening class in pointing with fingers .... I could go on, how much space do I have left...
His description of the work of art relects some of my own criticism of art. "Its suppose to be what???".
There are so many fun scenes all the way through this.

Steve Martin is great in this role, making the wry observations and trying to keep up with whats acceptable in the culture.
Marilu Henner has a good role, being close to the girlfriend from hell - high maintenance or what!
Sarah Jessica Parker as "dumb blonde" aspiring to be a spokesmodel;
and Victoria Tennant as the quirky English love interest also play good roles.

The Video/Audio
The video and sound are fine, nothing particularly special, but then it is mostly dialog.

The Extras
Extras - the making of is ok, nothing stunning. The rest sort of standard fare, and doesn`t give you a whole lot extra, but at least there are extras.

Summary
Each time I watch it, I catch some new quirk, or some new throw-away remark, and I can`t help being amused the wholeway through. Well worth owning!
posted by Julian Onions on 23/1/2004 15:13