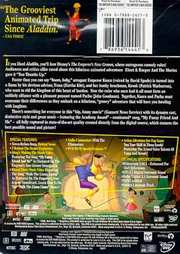 Back Cover of Emperor`s New Groove, The
Related Items

Emperor`s New Groove, The (US) 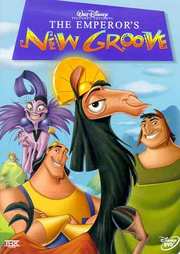 Synopsis:
If you liked Aladdin, you`ll love Disney`s The Emperor`s New Groove, where outrageous comedy rules! Audiences and critics alike raved about this hilarious animated adventure: Ebert & Roeper And The Movies gave it "Two Thumbs Up."

Faster than you can say "boom, baby", arrogant Emperor Kuzco (voiced by David Spade) is turned into a llama by his devious advisor, Yzma (Eartha Kitt), and her hunky henchman, Kronk (Patrick Warburton), who want to rid the kingdom of this beast of burden. Now the ruler who once had it all must form an unlikely alliance with a pleasant peasant named Pacha (John Goodman). Together, Kuzco and Pacha must overcome their differences as they embark on a hilarious, "groovy" adventure that will have you howling with laughter.

There`s something for everyone in this "hip, funny movie" (Gannett News Service) with its dynamo cast, distinctive style and great music - featuring the Academy Award®-nominated song, "My Funny Friend And Me" - all fully captured in state of the art quality created directly from the digital source, which ensures the best possible sound and picture.

Finally, a great movie from Disney that is accompanied by a great disk.
The story is very nice and not too childish, and all the characters are wonderful.
The video transfer is excellent. There are no compression signs at all and the colors are beautifully rendered. Notice that it only seems that there`s no CG in the movie, but there actually is, as explained in the extras. The visuals are very well done.
The DTS and DD 5.1 soundtrack are both very good. The surrounds are used on occasions for ambiance. While the soundtrack is not too "violent", everything sounds just right.
The menus are all animated with sound.
The extras include a commentary by the crew, a behind the scenes look, a deleted scene, 2 music videos, an interactive question game and 2 action games on DVD-ROM. All in all, this is exactly what I am looking for in the extras.
Bottom line - a great and funny movie that looks good and sounds good as well. Not just for kids.
posted by Zvi Josef on 29/5/2001 17:07
9 / 10

In a country that is not quite Peru of the Inca, Emperor Kuzco (David Spade) is a couple of days from his 18th birthday and a complete spoiled brat. He has summoned Pacha (John Goodman), head of a village not too far away, to tell him that the village is to be destroyed to make way for Kuzco's summer palace (complete with water slide). The emperor's advisor Yzma (Eartha Kitt) and her 'aid' Kronk (Patrick Warburton) have upset Kuzco by doing his job. Yzma is fired by Kuzco. Trying to get rid of the emperor Yzma gives Kronk a poison to put in Kuzco's drink - except the potion turns him into a talking llama. Pacha makes his way back to his village with an unknown extra bundle on his cart, a bag containing the Kuzco-llama

The Emperor's New Groove was Disney's attempt to make an out and out comedy cartoon (or animated feature as Disney like to call them). Despite the best efforts of the animators, story people, and in fact everyone else, the dead hand of the Disney Management culture nearly suffocated the idea. Disney were never very good at just comedy. Even the cartoon shorts of Mickey, Pluto and all were more whimsy then plain funny. The features were all stories - usually with songs - which were supposed to be good for the family, which in the old days meant good for little kids and nothing to upset the parents. Where Warner Brothers had the mayhem and surreal world of Bugs Bunny, Daffy Duck, Road Runner and Wile E Coyote and MGM had the sadistic violence of Tom and Jerry, Disney were the wholesome bunch.

So what about the film.
When it comes to gags Disney have had as good writers and artists as anyone else, the problem is the 'Disney Message'. The wholesome message has not been laid on carefully and thoughtfully, it has not been laid on with a trowel, it has been shovelled on. Right there, thunk, in the face (like one of the gags) - "you have got to think of others" - "you cannot be mean and happy" - "you have got to help one another". There is nothing wrong with messages if you have the correct way of sending them, just look at Princess Mononoke.

All American cartoon features are made in sequences - that is: parts of the action, songs or otherwise, are storyboarded and drawn and filmed: then when these are complete bridges are built to link everything together. (actually a growing number of live action films are being made that way - boy does it show). The skill is making the transition from one scene or set up to the next in such a way that the viewer does not notice/get board/go out of the cinema to buy a popcorn/or in case of Disney Cartoon the youngsters decide to go to the loo. This is where 'Emperor's New Groove' failed. The various main sequences are not just clever they border on brilliant. The look of the film, the characters and the jokes - both visual and audible is fantastic but the joins not only show, some actually look as if they were done for some other film.

The styling, layouts, characters and general look of the film are wonderful - the bright colours, the look of the palace, the use of genuine Inca art for the motifs - all gel, and in fact require more than viewing to take it all in. Then of cause you start to notice the steady stream of visual gags you missed first time round - like when Yzma finally gets Kusco to drink the poison - her drink is also poisoned - so she pours it into a pot containing a cactus, after the unexpected transformation the shot of Yzma shows that the cactus is also now in the shape of a llama (this one of the few visual gags mentioned in the commentary). Although it is not in the credits I would assume that the backgrounds have been created by 'Deep Canvas', a computer tool used by Disney since 'Tarzan' (1999) - this may have been mentioned on disc two, but I will explain why I could not watch it later.

The voices are very good, John Goodman and Eartha Kitt, have done it before and as you expect their characters look like a cartoon version of themselves, however I don't know who David Spade and Patrick Warburton are in the real world, but they do an excellent job with the two other main characters. As in fact do all of the voice cast.

This was supposed to be a review of the R1 'The Ultimate Groove 2-Disc Collector's Edition' unfortunately the only DVD's that my DV88 refuses to play have been Disney DVD discs, disc two with all the 'how we did it' bits would not play so all I have been able to do is watch the film and listen to the commentary. The quality of the picture is excellent - just as expected from a modern transfer - the colours are beautifully rich, the black level as sold as can be with no blemishes on the print and not a sign of compression. As usual I preferred the DTS track, although for those who cannot play DTS the Dolby 5.1 track perfectly good, with the sound stage placed in the centre and the ambiance and surround not being smothered by the music. I felt that the original music fit very well, but I am not a fan of 'celebratory' composers and the efforts by Sting were rather ordinary. But then as the songs are not an integral part of the film it probably does not matter. The commentary is interesting - but they don't tell nearly enough about the actual making of the film. That of course would be on the other disc.

'The Emperor's New Groove' was not a successful film. The estimated release cost was $125m with a US gross of $86m (rentals would be about 50% or $43m) one of the reasons could have been that there are 5 credited story writers.

Also - the title is a bit meaningless (some marketing executive trying to be 'hip') perhaps they should have stood by one of the two working titles they used: 'Kingdom in the Sun' or 'Kingdom of the Sun'

Despite its limitations I enjoyed his film greatly, what could have been a great comedy ended up being smothered by Disney morality - bit a pity really.
posted by Tony Myhill on 25/3/2003 15:31