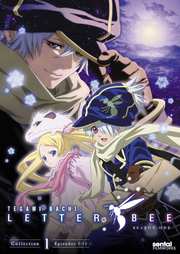 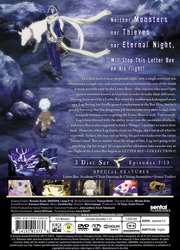 When you start watching a show for the third time on Crunchyroll, it’s time to take notice of the fact that maybe you like this series enough to put some money down on it. To be frank, I knew that I liked Tegami Bachi from the first time that I watched it, I was just going through the usual motions of waiting for someone in the UK to license it, and failing that waiting for the individual part releases in the US to be collated into a complete series release. When after five years, neither of these things had happened, it boiled down to just waiting for a studio sale and then biting the bullet. So here I am, with the two halves of Tegami Bachi: Letter Bee and then two halves of Tegami Bachi: Letter Bee Reverse, 50 episodes in all, and I get to review it the old fashioned way, in chunks. 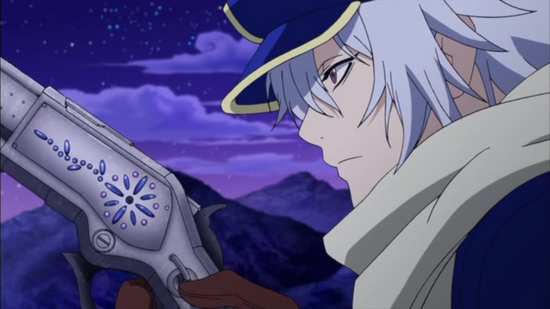 Tegami Bachi is the kind of story that you go for if you love world-building. This one has an intricate and imaginative fantasy setting that tantalises and inspires. It’s set in a world of eternal night called Amberground. People have settled there however, living under a small artificial sun. It’s a settlement segregated into three parts, the central elite world directly under the sun is Akatsuki, the middle classes live in Yuusari, the ring outside it, while the downtrodden and poor live in the dismal darkness of the outside ring, Yodaka. You need special permission to travel between these areas, and one group that have that permission are the postmen, the Letter Bees who deliver letters and parcels, forge connections and establish routes between the villages and towns. It’s a difficult job as in the wilderness there are massive insect like beasts, Gaichuu, which can’t be fought with conventional weaponry, and who are attracted to and prey on the human heart. But it’s the human heart that can fight them, energy focused by the Letter Bees through rare spirit amber, and embedded in special weapons called Shindanjuu, with the aid of Dingoes, partners, usually trained animals. 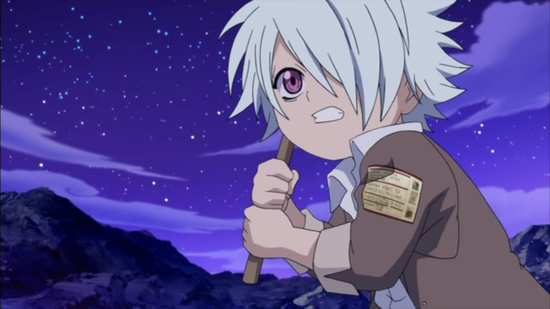 Tegami Bachi tells the story of Lag Seeing, who as a little boy was abandoned in the furthest rim of Yodaka, his mother forcibly taken to Akatsuki, and he was left next to the ruins of his home, with a postage label attached to his arm. The Letter Bee who found him, Gauche Suede, accepted him as his ‘parcel’ and undertook a perilous journey to deliver him to his aunt in Cambel Litus. This made such an impression on Lag that he developed an ambition to become a Letter Bee just like Gauche. Five years later after passing the preliminary exams, Lag makes the difficult journey to Yuusari to finally become a Bee, and on the way he encounters a strange blonde girl who has been left as a lost package in a railway station. He dubs her Niche, and she decides that she will be Lag’s Dingo. But the life of a Letter Bee turns out to be quite different from what Lag imagined. 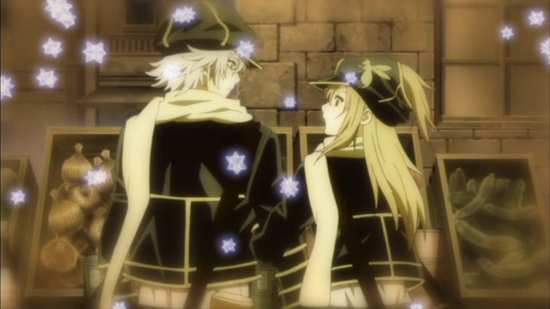 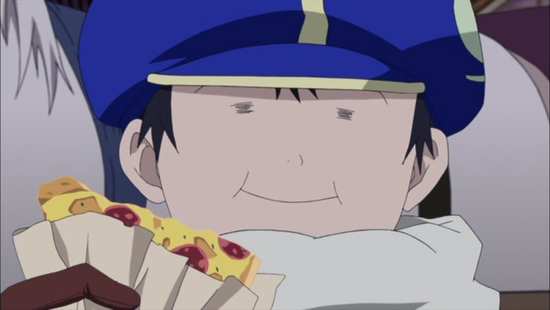 Tegami Bachi gets a 1.78:1 anamorphic NTSC transfer. It’s clear and sharp, with adequate detail, and no significant signs of compression. It is however prone to jerkiness in pans and scrolls, something that actually seems worse with progressive playback. However there is no tearing or combing, leading me to believe this is a progressive encode, just not a very good one. Tegami Bachi is an interesting anime, a story set in a twilight world, which in this case demands a lot of blues and purples in its palette. The world design is fairly impressive, offering a historical European vibe for its towns and villages, although one of the more fantastic elements in the story, the giant, insect-like Gaichuu, are rendered with the computer generated plasticity of elements that refuse to blend into the 2D animation. It’s a small niggle in an otherwise impressively put together show, and the more simplistic character designs allow for more fluid animation.

One glitch in the transfer showed up on disc 1 in the Academy Shorts. There were two frames of pixellation 2:40 into episode IV of the omake. 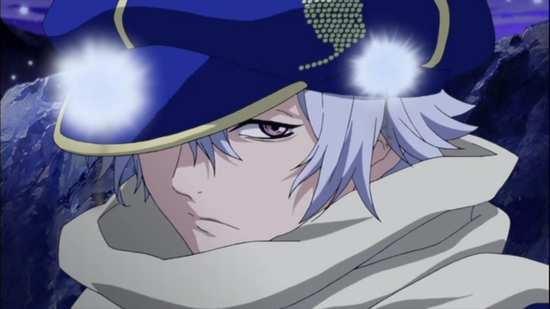 This is a subtitle only release, with just the Japanese DD 2.0 audio track to appreciate. It’s a fine track, the actors are cast suitably for the characters, while the show gets some great theme songs, and even better incidental music, which can be ethereal and choral at times. The subtitles are timed accurately, but unfortunately aren’t free of a handful of typos, not least of which is ‘streched’ in every opening sequence. Episode 10, 8:29 has an incomplete subtitle, with a translator note left in place of the word that should be there. This definitely could have used some proof-reading, but as it was one of Sentai Filmworks’ earlier releases, back when quantity counted over quality, you can understand the lower quality control on this release. We can only be grateful that it wasn’t dubbed back then. 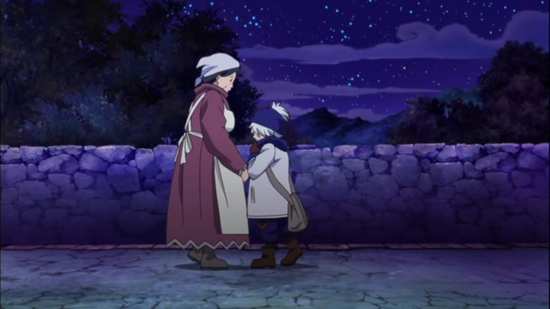 You get three discs in an Amaray case, two on a central hinged panel. The discs boot to static menus with jacket pictures, and each episode is followed by a translated English credit reel.

Disc 1 autoplays with a trailer for The Anime Network, and there are further trailers for Mashiroiro Symphony – The Color of Lovers, Qwaser of Stigmata, Hakuoki – Record of the Jade Blood, The Legend of Heroes, Kobato, and Penguin Drum. 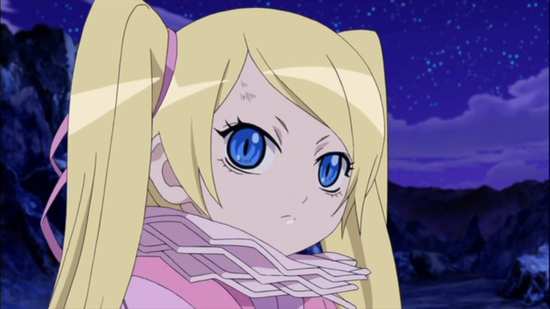 You get 4 Letter Bee Academy shorts on this disc, running to a total of 12:48. These are little comedy skits with SD versions of the characters in a school setting, hardly the most original of post-credit spin-offs.

Disc 2 offers 4 more Letter Bee Academy shorts which together last 12:44. You also get the textless credits, one opening and three endings. 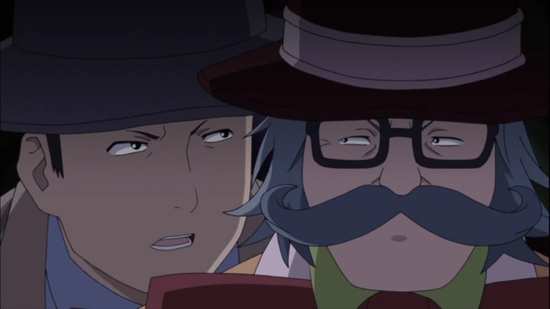 There are anime out there that bend over backwards to elicit an emotional reaction in the viewer, these are shows that are micrometered to precision, constructed to within an inch of their lives, all to make you cry. Jun Maeda is a master of this, as he adapted his nakige (crying game) visual novels to anime form, games such as Kanon and Clannad. Then along comes Tegami Bachi and makes it look effortless. It doesn’t even have to make any effort to elicit tears in the viewer, although that probably comes down to having a crybaby as the main character. Lag Seeing’s propensity to burst into tears could quickly become annoying, but thankfully he rarely sheds tears for himself, his tears are saved for other people, and usually preface him doing something about their problems. It’s easy to sympathise with Lag Seeing, and that makes Tegami Bachi: Letter Bee a show worth watching. 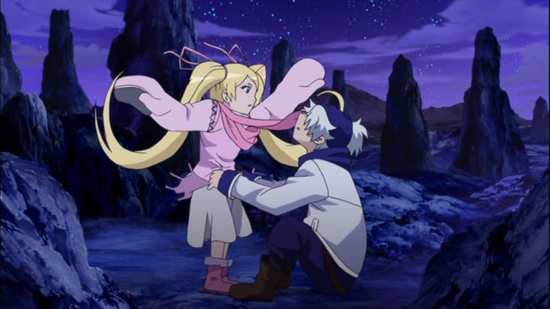 Tegami Bachi is a long-running shonen series much in the same vein as Naruto and Fairy Tail, and I can tell you straight up that the manga continues long after the 50 episode run of these two series is over. The thing that first attracted me to the show is its world building, and that resonates through the series. It’s an intricate fantasy world with coherent and consistent rules, that take something of the past, a feudal society, and sets in a reality where there is eternal darkness, save for the land illuminated by an artificial sun. Your proximity to that light determines your social status, and the three circles of Amberground are segregated as a result. 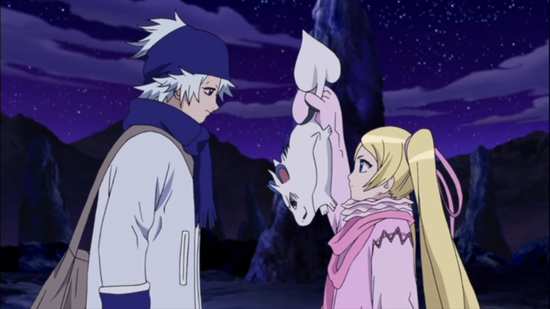 It also harks back to a time that I can recall, when there was no Internet, and long distance phone calls were prohibitively expensive. As someone whose family was thousands of miles away, we relied on letters to stay in touch, letters that took weeks to deliver, even with Airmail. Tegami Bachi’s philosophy of letters containing the heart of their authors, carried by postmen, Letter Bees through inhospitable land to reach their recipients really resonates with me. The perils of this wasteland comprise the Gaichuu, giant insects that are attracted to and prey on the human heart, and the human heart is the only weapon that can defeat them, focused through a piece of spirit amber embedded in a weapon. Use too much of your heart though, and you can literally lose yourself. 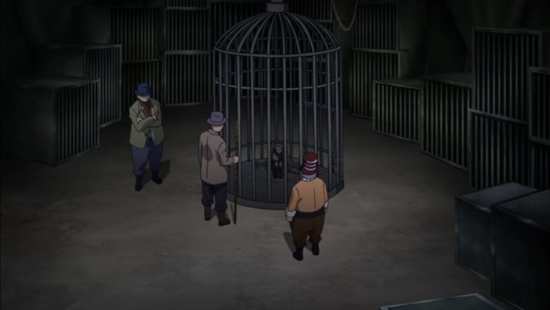 The protagonist Lag Seeing is a unique child in that he has a piece of spirit amber where his eye should be, and when he fires off a piece of his heart through a Shindanjuu, the side effect is to reveal the heart in an object (if it hits a letter, the thoughts and feelings of the person who wrote it are revealed). Since he was rescued from abandonment by a Letter Bee named Gauche Suede, and delivered to his aunt as a package, it’s been his ambition to become a Letter Bee just like Gauche, and the episodes in this collection cover his first steps on that journey. Aside from heart, another thing that a Letter Bee needs is a dingo, a companion to help them fight Gaichuu. It’s usually an animal, but Lag discovers a strange girl with unique powers (prehensile, sharp swordlike hair), and an aversion to wearing underwear who eventually becomes loyal enough to him to wear his oversized boxers. He dubs her Niche, and she accompanies him when he eventually becomes a Bee. 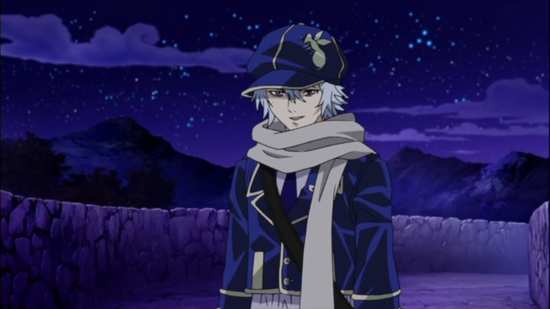 Tegami Bachi really does take its time telling the story. The first couple of episodes cover Lag’s encounter with Gauche at age 7, before catching up 5 years later as he leaves his Aunt’s town to travel to Yuusari and finally become a Bee. That journey takes some four episodes as he first meets Niche, and then pauses in a border town that highlights the inequalities in society, the resentment that some people have towards Bees as government workers. Lag faces his first setback when he gets to the head office, only to learn that Gauche has vanished, but he does meet Gauche’s sister Sylvette, and adds finding Gauche to being reunited with his mother as his ambitions. Under the Light is an episode that looks back at an important event in Amberground, the Day of Flicker, when the artificial sun went out. It’s the day that both Lag Seeing and Sylvette Suede were born, and the day that Gauche Suede lost his memories. The final three episodes in this collection show Lag’s first missions as a Letter Bee, three deliveries that test his philosophy of letters containing heart. There’s even a Christmas episode thrown in. 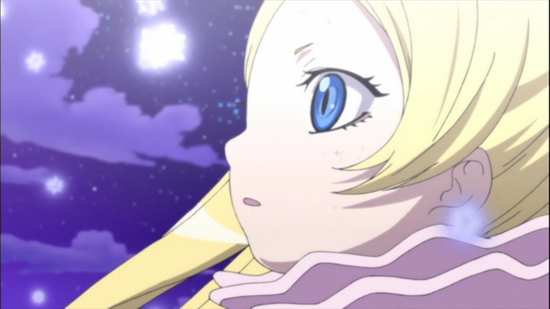 Tegami Bachi is a slow burner. We haven’t even got to the juicy part of the story yet. These thirteen episodes have all been about introducing the characters and setting the scene, getting some idea of how this fantastic and strange world works. But even given that, it is a show that draws you in and grabs you by the feels, with a delightful and effortless blending of tragic drama and entertaining comedy. Onwards to collection 2!