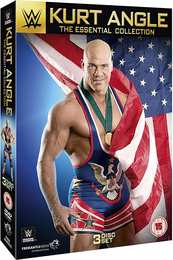 Kurt Angle is one of the greatest wrestlers of all time. The facts speak for themselves, winning the 1996 Olympic Gold medal, he is a recognised 13 time World Champion throughout his career. He won every single title the WWE had including the King of the Ring, WWE Championship, World Heavyweight Championship, Intercontinental, European, Hardcore and Tag Team championships. You name it, he won it.

His success cannot be disputed and for many he is one of the best technical wrestlers of all time. He was PWI's Number 1 Wrestler of the PWI 500 in 2001, was their Wrestler of the Year in 2003 and won Match of the year twice in 2003 and 2005. The Wrestling Observer even awarded him the award for Wrestler of the Decade 2000-2009. However, unlike many gifted grapplers whose career was based solely on their ability in the ring, Kurt Angle's charisma and ability on the mic was almost as good as his work in the ring.

Now, I should start by saying, much like the recent Seth Rollins set, this is the type of set that I hate. You all know what that is: Talk. Match. Talk. Match. Talk. For me this feels cheap and I do wish that WWE would just splice all the talking parts together into one long interview and then include the matches as a bonus. That being said I can't argue with how good this set is. Angle is very candid and honest about his career and you can tell from listening to him that he is proud of his career and enjoyed it. He goes through every aspect of his WWE career and it is so surprising watching him develop and you realise early on that he didn't just become the best, he was always the best and just got better than better than the best, if there is such a thing.

His matches do read like a 'Who's Who' of the Wrestling Hall of Fame: Stone Cold, The Rock, Triple H, Brock Lesnar, Shawn Michaels, Eddie Guerrero, Chris Jericho, John Cena, Rob Van Dam, The Undertaker, Hulk Hogan and more. I was always surprised with how well that Angle was able to work with anyone no matter whether it was the brawling of a Stone Cold, the lucha-style of Guerrero or the over the top theatrics of a Hulk Hogan he was still able to put on an amazing match.

It would be difficult to pick a best match, as they are all so good, but if I had to I would say his 30 minute Iron Man Match against Shawn Michaels was perfect (I just wish they had saved this for a PPV and stretched it to the full hour). The Triple Threat between him The Rock and The Undertaker was a great match to watch and he worked so well with both of these main eventers. His insane match against Shane McMahon at the King of the Ring is also a highlight and certainly one that needs to be seen to be believed. There are no matches that are skippable and that is such a strength to this set and I would recommend watching all of it with no exceptions. It is very rare that I don't hover over the Skip button on my remote and I enjoyed every minute of it.

Notable matches that are absent are of course anything to do with Chris Benoit, which was to be expected, but also a number of notable matches. Many of these are available elsewhere, but it would have been nice to have them here too as this may possibly be the only Kurt Angle that will be released to make it complete. His Wrestlemania 19 match against Brock Lesnar is missing, as his the Iron Man Match from Smackdown from 2003 which won the PWI Match of the Year. Other ones that stuck out to me were of course his match against The Undertaker from No Way Out 2005 which was one of the best matches of that year and his Wrestlemania matches against Eddie Guerrero at Wrestlemania 22, and of course the infamous 'Hair vs. Hair' match against Edge from Judgment Day 2002.

That being said, every single match on this set is amazing. Whether you are watching his debut match against Shawn Stasiak from 1999 or one of his final matches against Rob Van Dam in 2006 it is still the same smooth and perfect wrestler and showman that he always was. It is a shame that no deal could be made with TNA to include some of his work with them, though they did release a set a while back regarding this.

It is a shame that they do not include his induction at the Hall of Fame, as this would have been a nice way to end this set. Hopefully, the reason is that the rumours of 'One More Match' are true and much like the Warrior he will get another set when he has officially retired.

Kurt Angle: The Essential Collection is quite frankly exactly what it says it is. I could argue that matches are missing, but really this is almost like saying this bag of diamonds has one missing. Every match is simply perfect and if you are a fan of Kurt Angle or just want to watch hours of pitch perfect wrestling and entertainment then this is definitely something you should pick up...