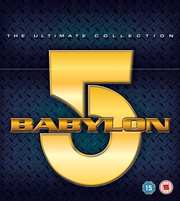 Back to the main page...

Babylon 5 is Earth’s first great contribution to the galaxy, a massive space station located in neutral space, a monument to peace and co-operation, with a quarter of a million inhabitants. It’s where the great powers meet, Humans, Minbari, Centauri, and Narn, as well as the League of Non-Aligned Worlds, to peacefully resolve their differences, to trade, to just get along. At least that is the dream. But given the quarrelsome nature of the ambassadors, particularly the Narn G’Kar and the Centauri Londo Mollari, that’s a difficult ambition to achieve, made all the harder as it becomes clear that many on Earth don’t believe in the Babylon project anymore. On top of that, there are lingering resentments between the Minbari and Earth Alliance, following the war ten years previously in which the all-powerful Minbari inexplicably surrendered, and the Minbari Ambassador Delenn’s enigmatic nature doesn’t offer any further clarity. 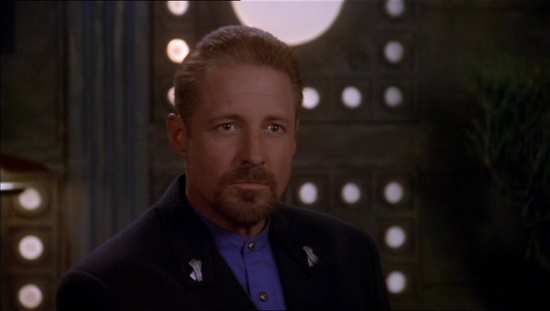 The wars are over, the Shadows defeated, Earth freed from the tyranny of President Clark, with the many worlds and races now coming together in an Interstellar Alliance, with its first President, John Sheridan. He may be newly married to Delenn, but the honeymoon for both them and the Alliance will be short-lived, as the new government faces some tough challenges in its first year. Following their grand triumphs of the previous year, the denizens of Babylon 5 will learn that there’s no such thing as a ‘happily ever after’. 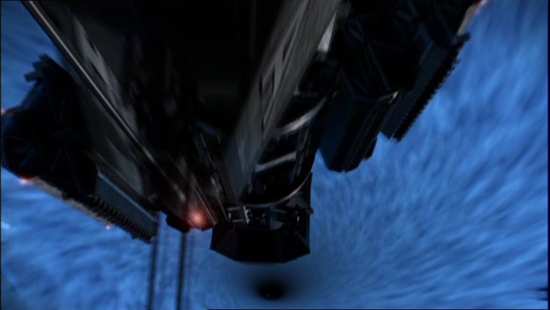 22 more episodes of Babylon 5 are presented in this Season 5 Collection, The Wheel of Fire, across 6 discs.

Disc 1
1. No Compromises
2. The Very Long Night of Londo Mollari
3. The Paragon of Animals
4. A View from the Gallery

Disc 2
5. Learning Curve
6. Strange Relations
7. Secrets of the Soul
8. Day of the Dead 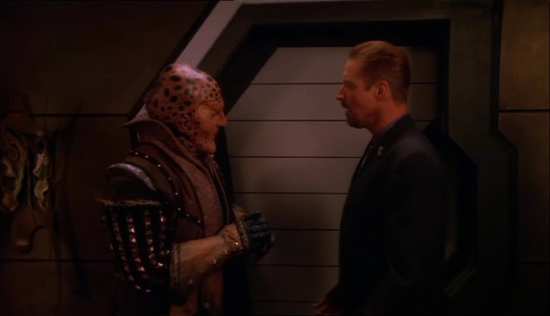 Disc 4
13. The Corps is Mother, The Corps is Father
14. Meditations on the Abyss
15. Darkness Ascending
16. And All My Dreams, Torn Asunder 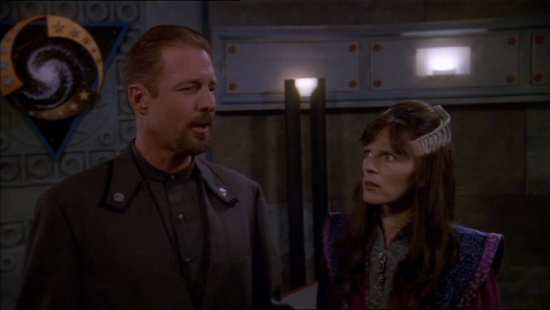 The 1.78:1 anamorphic transfer for Season 5 is the same mixed bag as it has been all the way through the series. You have clear and sharp live action film elements, albeit occasionally afflicted by print damage and minor scratches. The space effects shots are cropped and zoomed from the video masters, and any live action shot with effects is also going to be cropped and zoomed, as are the credit sequences, and crossfades between live action and effects. Just like season 2 we have another crime, horizontally stretched effects shots instead of zoomed and cropped, so now we have B5 in some scenes appearing 30% longer and thinner than it should. I thought that was a one-off, but... it is still watchable. 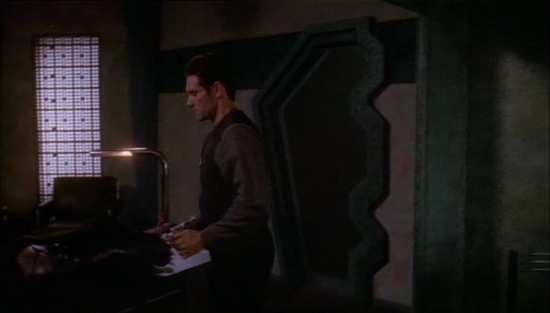 You get DD 5.1 Surround English, 2.0 Surround French, with English, French, Dutch and Arabic subtitles. The show was originally broadcast in stereo, so the surround doesn’t offer much more than that in the way of discreet placement of effects and action. But still, the general experience is quite immersive, and enjoyable. The dialogue is mostly clear, although volume levels are low. An occasional flick on of the subtitles might be required. Christopher Franke maintains the show’s style, one of symphonic electronica. 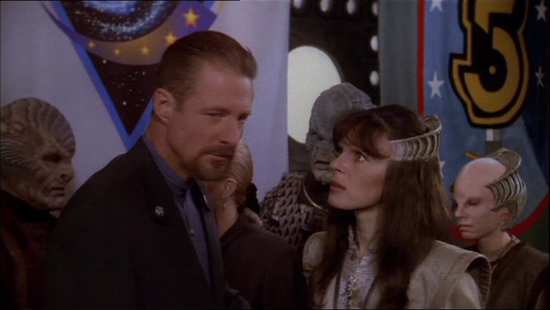 You get six discs in an Amaray case, with four discs on either side of two central hinged panels, and two discs front and back. The inner sleeve has an episode listing. Each disc presents its contents with animated menus. The episode select screen also offers the previews for each episode, presented in 4:3 format.

Disc 1 offers a 7:18 minute introduction to the collection from creator J. Michael Straczynski, the cast and the crew.

The extras this time begin on disc 5, with an audio commentary on episode 17, Movements of Fire and Shadow, a nice retrospective from actors Bruce Boxleitner Peter Jurasik, Patricia Tallman, and Tracy Scoggins. 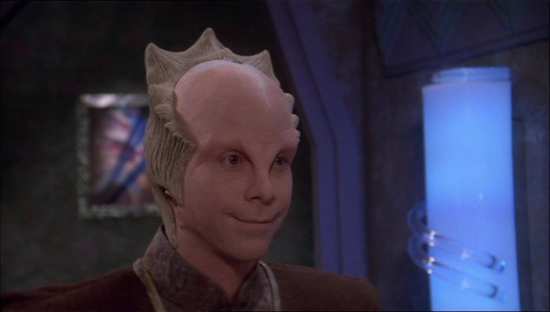 J. Michael Straczynski offers a commentary on episode 18, The Fall of Centauri Prime.

Disc 6 contains the final extra features, including a melancholy commentary on Sleeping in Light, episode 22 from J. Michael Straczynski. 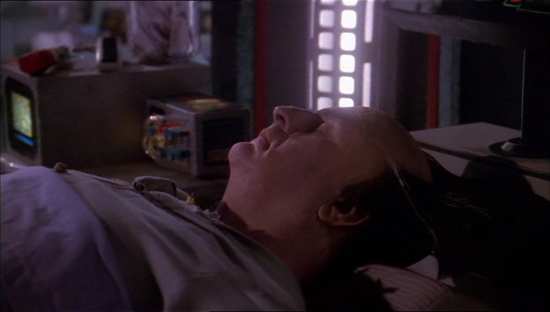 Beyond Babylon 5 lasts 6:48, and looks at the fans of the B5 universe, and some of the spin-off media.

The Universe of Babylon 5 returns to offer more Data Files and Personnel Files for Season 5, as well as a 3:15 gag reel.

Finally there are three Additional and Extended Scenes from the final episode, Sleeping in Light running to 5:09 in total. 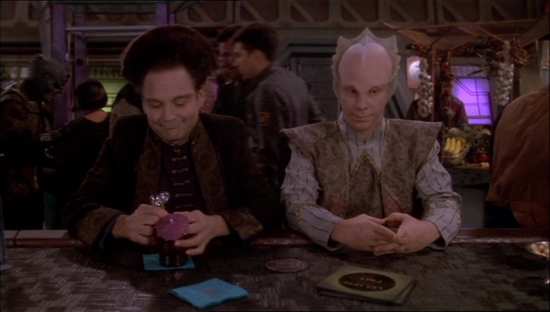 If you’ve ever seen shows like Quantum Leap, or Star Trek: Voyager, you will know just how disappointing a bad ending to a show can be, especially an abrupt one that just leaves you hanging. It’s even worse when the creators know ahead of time that a show is coming to an end, and they still drop the ball for the final episode. Babylon 5 got to have its cake and eat it. J. Michael Straczynski had the story all plotted out for five years, and then the show got cancelled at the end of year 4. There was a whole lot of compression, and shifting things around to get the major war arcs concluded by the end of that season, and the final episode of season 4 was actually Sleeping in Light, which explains the presence of Claudia Christian who left the show before season 5. At the last minute, the show was reprieved; it got a whole new season from TNT, which meant that not only did Straczynski get the chance to wrap up the few loose plot threads remaining from season 4, but he got to tell the story of what happens to the heroes after their grand triumphs; is there a happily ever after? 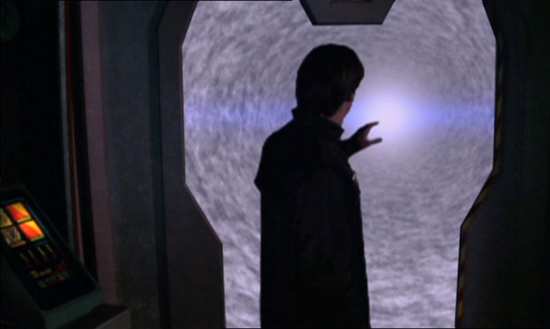 There is something to be said for going out on a high though, and Season 5 of Babylon 5 pales in comparison to 2, 3, and 4, feeling a lot like the extended epilogue at the end of Peter Jackson’s Lord of the Rings trilogy. One obvious problem is the departure of Claudia Christian, and her replacement, Tracy Scoggins playing the new station commander, Elizabeth Lochley. Replacing a beloved character at the last minute is a thankless task to begin with, and she isn’t helped by the character being overwritten, at times feeling like an exposition device. At the time, I thought it was a fannish resentment at the change in character, but given the mitigating distance of time, I find I still feel that way. I just don’t like the character, whether through the writing, or through the actor’s portrayal. 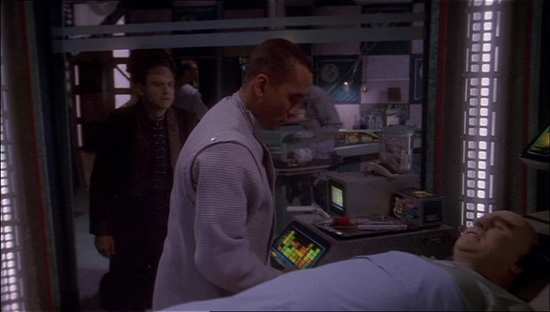 My second disappointment with the season comes with the telepath arc during the first half, once again down to a new character, Byron, the Gandhi-like leader of the breakaway telepaths looking to free themselves from the rigid oversight of the Psi Corps. The revised season 4 conclusion, The Deconstruction of Falling Stars had a brief flash-forward to an incident that plays out here, an opening salvo in the long prophesied Telepath war. Although we don’t see the war itself, the trigger is pulled in this season, and it’s something of a damp squib for me. I find that Byron’s earnest quest for telepath independence lacks nuance, and the shades of grey that the rest of the story arcs managed. Really, the whole Telepath arc in season 5 seems to have just one goal, turning Lyta to the ‘dark side’ 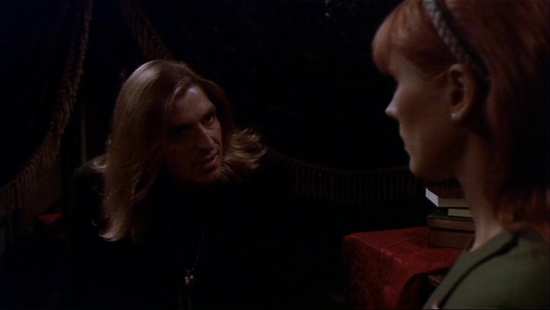 The real strength to season 5 is what happens to the Centauri and Londo in particular. One of the strongest character relationships in the show is that between G’Kar and Londo, and the first four seasons saw them as rivals, grudging foes, to downright hatred, before becoming reluctant allies. This season sees their relationship come full circle, through unlikely forgiveness to genuine friendship, through G’Kar’s sacrifice and enlightenment, and Londo’s downward spiral with momentary glimpses of hope. There are times in this season that the two are more like a married couple, and this relationship really mirrors the arc of the series as a whole. 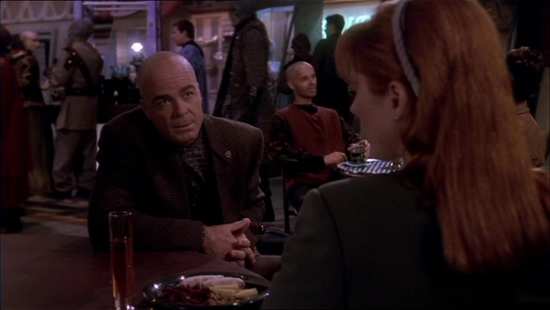 Just when things were going so great for Londo, peace in the galaxy, rapprochement with his friends, joining the Interstellar Alliance, the minions of the Shadows, the Drakh show up on Centauri Prime and send his people straight back down the dark path again, and he gets pulled right into it. It’s not as epic as the war arcs from the previous seasons, but the insidious nature of the Drakh, and their goal to tear the fledgling Alliance apart leads most of the intrigue and action in this final season. 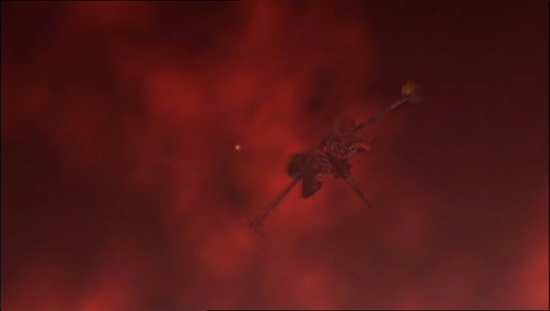 But it is interesting seeing the paths that the characters take following the climax of the Shadow War and the insurrection against Clark. For Sheridan and Delenn, it is pretty much a happily ever after, including their marriage, and with Sheridan becoming the first president of the Interstellar Alliance, although there are a few caveats. Lyta realises that she has power and strength and that takes her on a separate path that often comes into conflict with the others. Lennier’s devotion to Delenn also takes him in the wrong direction, but tragically for him, it’s just one solitary decision that negates all that was positive in his life. By far the most interesting arc in this season is that of Michael Garibaldi, whose personal vendetta against Bester leaves him in a dark place, and he hits the bottle in a big and disastrous way. 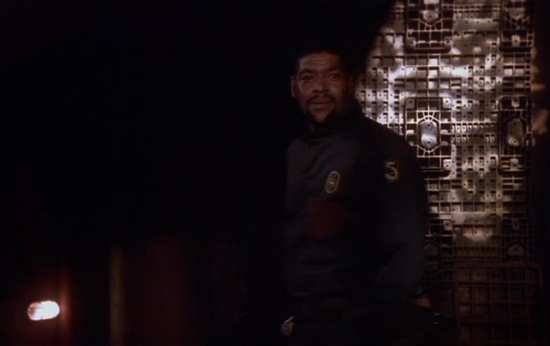 There are some good episodes in season 5, some great episodes too, and one positive is that this season has more Bester than any of the others. The full extra season of episodes means that we get to explore a little more of the Babylon 5 universe outside the main story arc, and some of those episodes, such as the Psi Corps one are really interesting; the one with Penn and Teller, not so much. Babylon 5 still manages to go out on a high, but for much of the first half of season 5, it’s a pale shadow of what has come before.