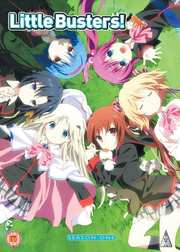 The Key/Visual Jun Maeda collaborations are a little sub-genre of their own in anime; the adaptations of visual novels, elaborate, narrative focused video games make for compelling storytelling, with great characterisations and pretty impressive music too. There was a brief time when it looks as we in the UK might dive right into this world, when Manga Entertainment brought us the epic Clannad, and its sequel, Clannad After Story. Alas, all that followed thereafter was Angel Beats, a show that subverted its own genre. That meant that we missed out on Air, and the magnificent Kanon. But now MVM are having another go, and they are going all out to bring us the Little Busters franchise. We’re getting the 2-cour first season, the Refrain follow-up, and the OVAs, all on DVD and on Blu-ray. But as so often happens, we may have missed the boat, as all of the Little Busters hype was busy exploding some four years ago, when forums and social media were buzzing about the show. We’re now getting it some three years after the US. After this much time, Little Busters will have to stand on its own two feet, without the support of hyperbole. 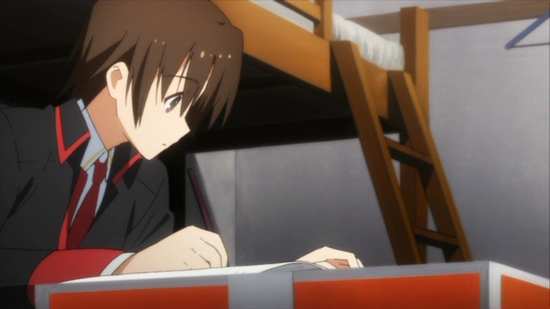 When Riki Naoe was a child, he suffered the tragic loss of his parents. But his depression began to lift when he was befriended by siblings Kyousuke and Rin Natsume, and Masato Inohara, and Kengo Miyazawa, collectively known as the Little Busters. They invited him into their gang, and made his childhood an adventure, where they were heroes of justice. Now, as Riki is in his second year of high school, Kyousuke ready to graduate, those childhood dreams have started to fade as adulthood beckons. But Riki wants to recapture those dreams once more, and that gives Kyousuke an idea. A baseball team, called The Little Busters. But first they need four more members. Meanwhile cat lover Rin is getting little messages tied to her cats, clues to the ‘secret of the world’. 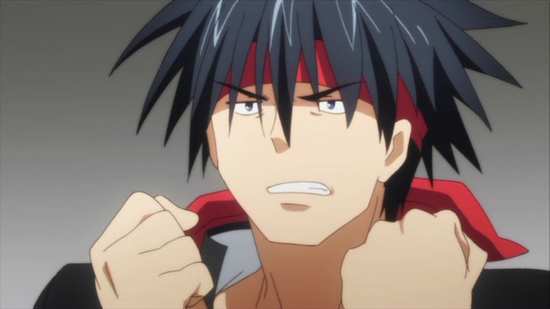 26 episodes of Little Busters! are presented across 6 DVDs from MVM.

Disc 3
9. Save the Cafeteria!
10. The Blue Above in the Sky, or the Blue of the Ocean
11. Horror Cool-Down Contest
12. The Sky of Endless Blue
13. The Place Where the End Begins 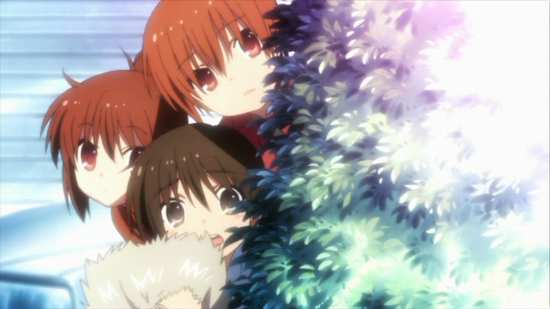 Disc 5
18. The Answer is Within Your Heart
19. Keep Working Hard
20. Cure the Lovesick
21. Fifty Nautical Miles into the Sky 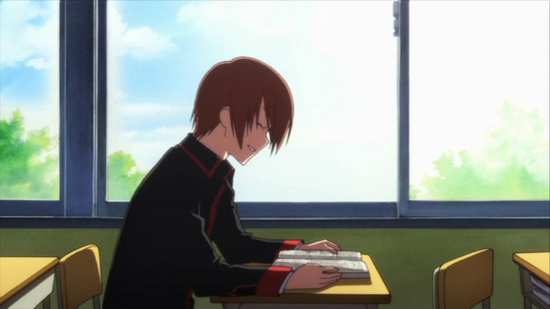 Little Busters gets a 1.78:1 anamorphic NTSC transfer, progressively encoded on these dual layer discs. The image is clear and sharp, the animation comes across without issue, and colours are strong and consistent. And it’s all a disappointment. The previous Key/Visual anime that I have seen, Kanon and Clannad were animated by KyoAni, who brought their attention to detail, wonderful world and character design, and rich atmospheric visuals to bear, resulting in shows that were memorable and of stellar quality. Angel Beats too got a stellar production from PA Works, the company behind A Lull in the Sea and Hanasaku Iroha. For Little Busters, it’s Studio J.C Staff doing the honours, and they have given the show a rather lacklustre and unenthusiastic animation. The character designs are consistent, but the character animation never delivers the right level of emotion. The world design is rather pedestrian, and the animation too is one that looks to cut frame counts to save on money and effort, rather than deliver something evocative and memorable. Little Busters does just enough to get its story across, and little more. 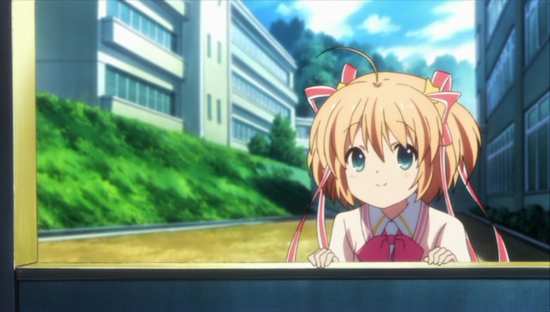 You have the choice between Dolby Digital 2.0 Stereo English and Japanese, with optional translated subtitles and a signs only track. Little Busters dates from that period when Sentai’s dubs were at their nadir, and I certainly couldn’t live with more than a minute or so of this one. Fortunately the Japanese audio is present and correct, with the cast suited well to their roles, and the overall viewing experience is more than acceptable, with the action represented well, and the show’s musical themes feeling typically game-like as for all Key/Visual anime. The credit theme songs are very catchy, if noticeably missing out on the vocal talents of Lia. The subtitles are timed accurately and free of typos except in Disc 4, episode 14 at 15:50, where the word ‘the’ is repeated twice. 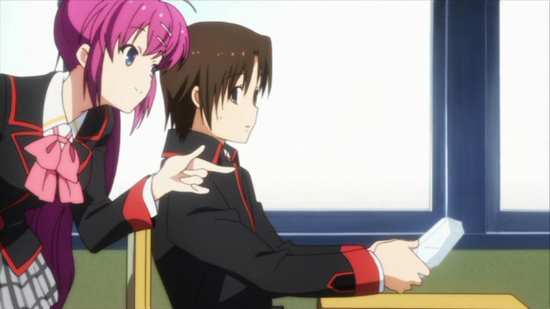 The discs present their content with static menus and jacket pictures. Each episode is followed by a translated English credit reel. 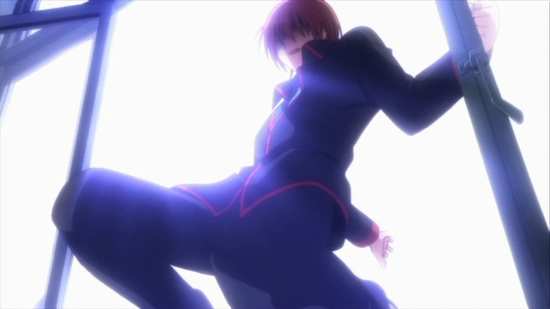 Disc 2 has the textless credits, 1 opening and 1 ending.

Disc 4 has trailers for EBITEN, From the New World, Cuticle Detective Inaba, Girls und Panzer, Kokoro Connect, and Love, Chunibyo and Other Delusions.

Disc 5 has the textless credits again, alongside Japanese Promos, TV Promos, and BD Promos, about 6 minutes worth in total. 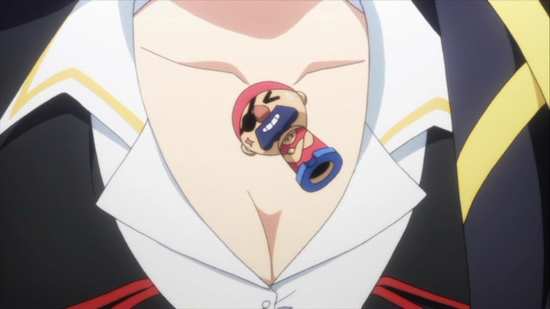 This is a little hard to review, as for a complete series, it’s wholly incomplete as a story. Clannad might have been released as two series, but you could conceivably watch the first and stop right there, satisfied with the story to that point. But Little Busters isn’t like that. The only overreaching arc that comes to a conclusion in these 26 episodes is that of putting a baseball team together. Of all the other long term story arcs in this show, none are completed here. You’ll need the follow up series, Little Busters! Refrain for that, and quite possibly the Little Busters! EX OVA series too, both of which are coming soon here in the UK courtesy of MVM. So given that there is no satisfactory conclusion, the question is if Little Busters satisfies in other respects, in its storytelling, its art style, its humour, its characters and so on. I have to say that it is a little hit and miss; more hit than miss certainly, but you can’t disregard its negatives. 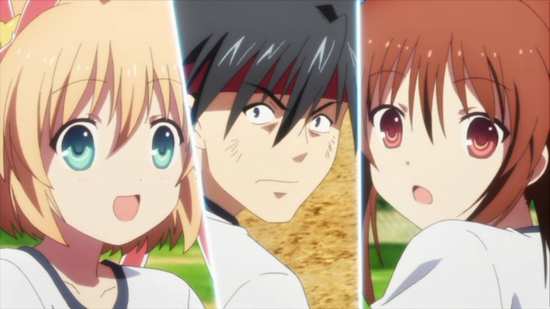 The first, and most unfair of these is that it’s not a KyoAni production. It does come out unfavourably compared to other Key/Visual shows such as Kanon and Clannad. Eye-candy makes a big difference, and the art style of Little Busters is just too mundane and simplistic. KyoAni imbued their stories with warmth, a sense of the ethereal and magic, while their attention to detail allowed for far greater character examination and nuance. You get little or none of that with Little Busters. The characters do stay on model, but they’re not detailed enough, the animation isn’t good enough to really draw you in. The world design is mundane, which makes it harder to accept when odd things do start happening in the story. You just won’t have suspended your disbelief sufficiently to accept this show’s ‘magic’. 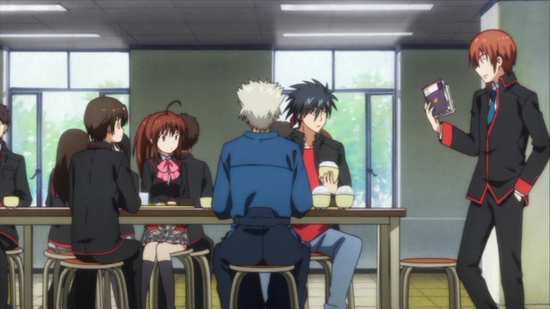 The second thing, and another unfair comparison, is that Clannad and Kanon were harem shows of a sort. The central male characters in those shows had adventures with the various girls that they encountered, one of whom would invariably turn out to be the romantic interest (the games allowed for that possibility with all), but there was definitely a romantic intent. The first thing that you notice is that the central male protagonist in Little Busters, Riki Naoe is voiced by females in both language versions, which subconsciously diminishes any romantic aspect of the show. And while he is the central character, he’s not solitary; he has his original Little Busters group with him, Kyousuke, Kengo, Masato and Rin. He has his adventures with the girls he encounters over the show, as he recruits for the baseball team, little mysteries to solve, but he has help, and it’s obviously not about a potential romance with the ‘winning’ girl. 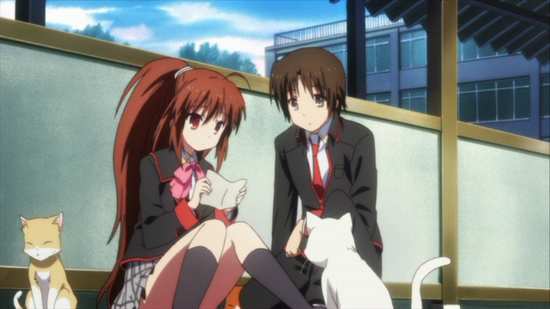 My final criticism is about the humour in the show, which lacks spontaneity, and often feels contrived and obligatory in the show. This is usually during the downtime in between the character story arcs, and once again the simpler animation style makes it all seem formulaic and repetitive. The first time Kyousuke introduces the rules of school fights (two challengers, onlookers throw random objects, challengers do battle with objects they catch) it seems funny and inventive. But by the third or fourth time, you begin to roll your eyes at the recycled animation. Yuiko’s lustful nature seems to be her only attribute, Haruka spinning Kud makes no sense whatsoever, and it all boils down to reiterating superficial character traits instead of anything warm and natural. 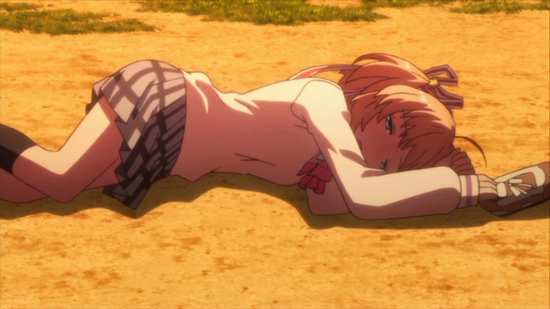 Where Little Busters succeeds is in its character story arcs. Riki may no longer be a solitary protagonist, and he’s as much reliant on Kyousuke, Rin, Masato and Kengo as the people he helps are reliant on him, but the story still boils down to Riki meeting girls as he recruits for the Little Busters baseball team, getting to know them, and helping them with their personal issues. And these stories, Komari, Kud, Haruka and Kanata, and Mio’s all hold the attention, and unfold in the typically mysterious ways that all the Key/Visual anime girl ‘conquests’ do. And given Riki’s past, the loss of his parents, and how the Little Busters helped him re-engage with the world, bringing him out of his depression, it’s unsurprising that the girls’ particular problems resonate with him on a personal level as well. 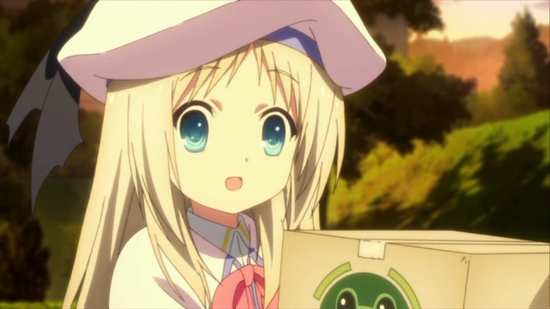 In terms of long term character arcs, the most obvious is that of Rin, who at the start of the show is a shy, awkward girl who can only be herself with Riki, her brother Kyousuke, Kengo and Masato, the five solid friends from the beginning, and it seems that she’s happy with that. Of course with her brother about to graduate, the Little Busters will be broken up, so when Riki starts recruiting other girls for the baseball team, Rin slowly comes out of her shell as she makes new friends. 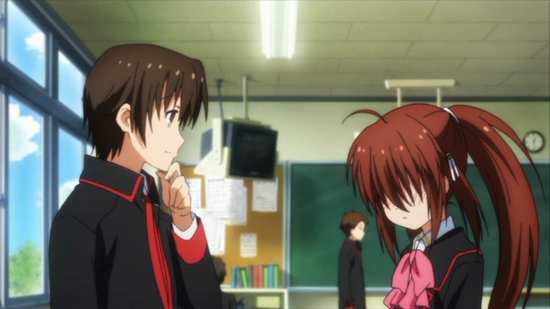 The long running mysteries aren’t visited often enough to register properly. Once every few episodes, Riki will remind us that he is narcoleptic, and it started after his parents’ deaths, emphasised by him falling over. Also once in a while, a cat will turn up with a quest tied to its tail, offering the “Secret of the World”. There are about three quests in this 26 episode series, each taking up an episode in runtime, spaced just far enough apart for you to forget the plot element altogether. Still, with this first series complete, and most of the girls’ problems solved by Riki, it seems more than likely that Little Busters! Refrain will address the narcolepsy and the Secret of the World. Little Busters isn’t quite up to the standards of Kanon or Clannad, both in terms of animation and storytelling, but it is watchable enough, and offers decent entertainment.