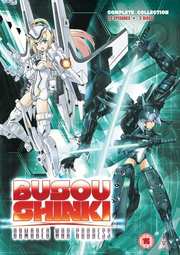 As a rule, I don’t drop anime shows that I’m streaming. I tend to see them through, to the bitter end in some cases, as I always have a sneaking suspicion that the bad ones might turn good in the end, though they seldom do. That’s even when I have time to watch maybe one episode a week or less, and it does have the effect that in my Crunchyroll queue, I’m watching shows that are years old now, I have some titles in there that are also in my DVD backlog! Can you believe I’m still sticking with Jojo’s Bizarre Adventure, despite thinking it’s absolute tosh, the anime equivalent of car-crash TV. This entire prelude leads to one statement. I dropped Busou Shinki when it was streamed in the UK. What’s more for the life of me, I can’t remember why. I’ve been dreading getting to these review discs. Just what did this show do to me to warrant me dropping it after a few episodes? I guess I’m going to find out... 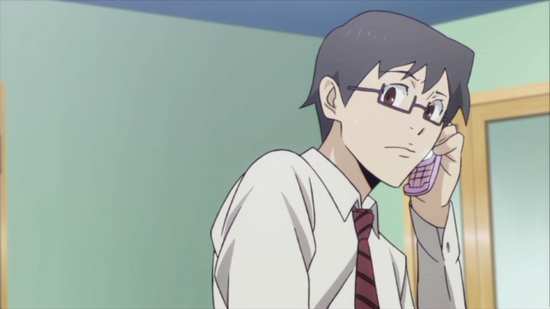 When they created little 15 centimetre robotic dolls as assistants to people, it wasn’t long before they were put into battle for the purposes of entertainment, a cute version of Robot Wars in holographic battlefields. But for one master, Busou Shinki weren’t for fighting. As he returns to Japan after several years to start high school, he brings three Busou Shinki dolls with him, his first doll Ann, as well as Ines and Lene. Soon after, he gets a gift from his father, a brand new Shinki named Hina. While Ann, Ines, and Lene are pretty much domesticated, Hina’s all gung-ho and ready to go into battle. Busou Shinki is the story of what these dolls get up to after their master leaves for school. 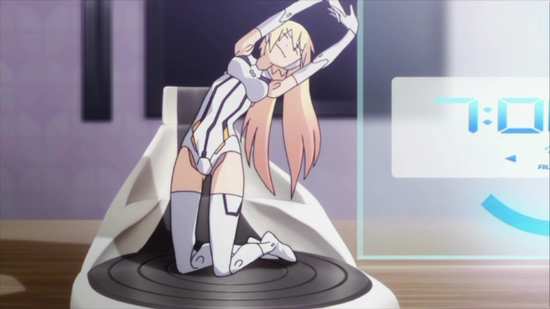 13 episodes of Busou Shinki are presented across 3 DVDs from MVM. The show is also available on Blu-ray.

Disc 1
1. I Found Something Important
2. The Secret Ingredient is the Smell of Gunpowder
3. Crash! Battle Trike
4. It’s a Race! Once Around the Park

Disc 2
5. Beach Swimsuit Armor
6. Attention, Please! Our Plane is Bound for Hell
7. The Visitor Comes with the Sound of Rain
8. Someday, Somewhere

Disc 3
9. Lene’s Underground Wars of the Empire
10. A Christmas Song For You
11. We’ll Settle it Tonight! Who is the Strongest Shinki?!
12. Don’t Say, Goodbye
13. InstallxDream 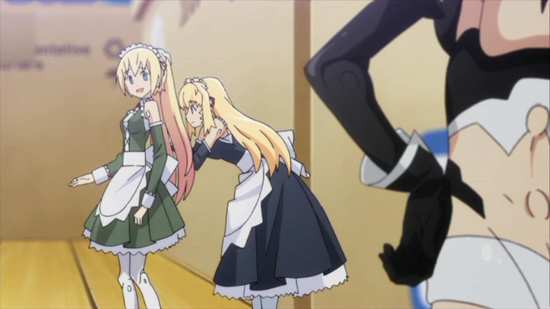 Busou Shinki gets a 1.78:1 anamorphic NTSC transfer on these discs, progressively encoded. It’s a perfectly adequate transfer, clear and sharp with good colour reproduction, and no significant signs of digital artefacts or even banding. It’s a light, frothy, comedy animation with plenty of bold lines and bright colours, lacking the nuance and complexity of animation that might trouble the DVD format. The concept allows for the ‘Land of the Giants’ approach of seeing the everyday world from a different perspective, although scale tends to match what is needed in a particular scene, rather than strictly following the 15-centimetre high character rule. The character designs are pleasant enough, although the fan service can get a little inappropriate given what I assume is the younger target audience. 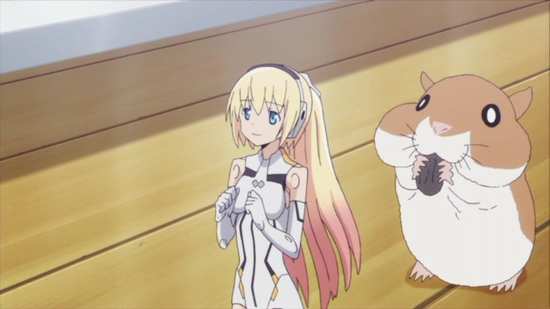 This is a subtitle only release, with DD 2.0 Japanese the sole audio option. It’s a pleasant enough track, with the characters suitably cast, the odd moment of action coming across well, and the show’s music suiting it too, particularly the theme songs. The subtitles are timed accurately and are free of typos, although one translation choice constantly comes across as an error. The main characters are little robots, whose only consumption, apart from a recharge, are bottles of flavoured oil. In the subtitles, these come in jelly cans. The obvious translation is jerrycan, and it looks stupid whenever the mistranslation appears. 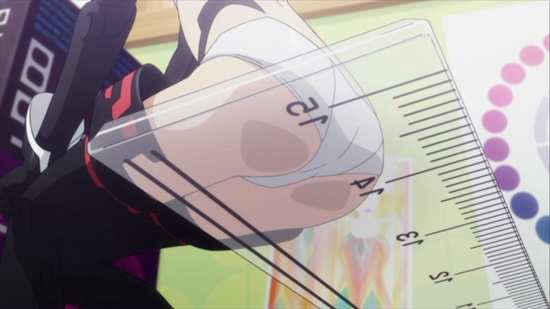 The discs present their content with static menus and jacket pictures, with each episode followed by a translated English credit reel.

Disc 2 has two minutes of Japanese Promos, and the textless credits. 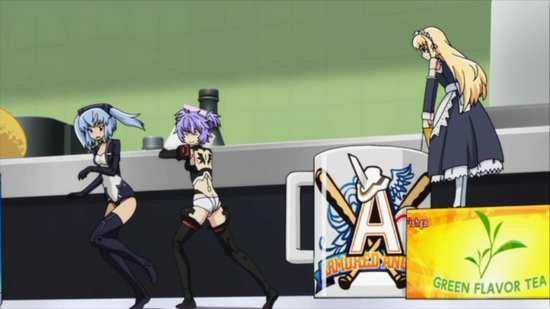 I still have no idea why I originally dropped Busou Shinki, although I have to state that this isn’t a great show, it’s one of the shows that I stick with in the hope that it will turn good. In fact, Busou Shinki is a prime example of a good show that is sabotaged by one single creative choice. When you read the blurb for the show, you’ll probably be put in mind of Angelic Layer, the Clamp adaptation that saw little robots fighting in grand tournaments. A more accurate comparison would be The Adventures of Mini-Goddess, which looked at what three goddesses got up to when Keiichi Morisato went to college (they shrunk down to miniature size and had fun, particularly with a rat called Gan-chan). Busou Shinki plays in that arena, although the male protagonist plays more of a role in this show. It’s still the tale of what four little girl robots get up to when he’s not around though. 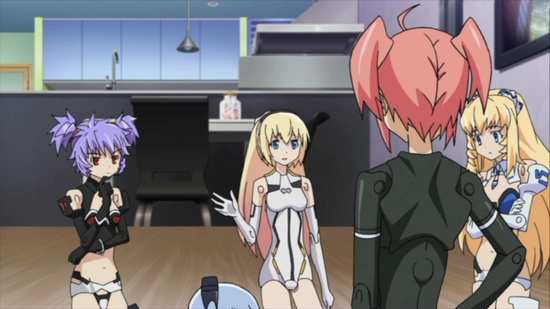 It can be a whole lot of miniature fun, the small scale in a world of giants, and the stories are simplistic enough, the characters uncomplicated enough to appeal to younger anime audiences, although a little older than the Mini-Goddess target demographic. Cute little girl robots cooking for their master, proving his innocence when there’s a Shinki thief about, entering in a mini Grand Prix, going on vacation to the beach, encountering a spooky Shinki from next-door, losing Master’s packed lunch, and the obligatory part time job to earn money for a Christmas present episode, are all stories delivered with a light touch that don’t overtly tax the emotions. It’s perfect kiddie fodder. 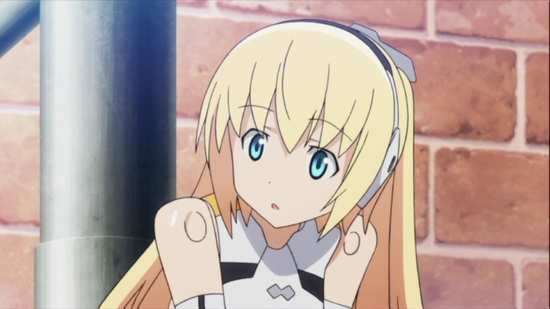 Only it would be were it not for the egregious fan service. These are little dolls dressed up in skimpy bondage gear, little dolls with booby bounce, little dolls that make cute little sex noises when a maintenance exam gets intimate. On top of that, the fan service doesn’t work, when these are anatomically correct dolls, in that their anatomy matches that of 6-inch plastic dolls, with pressed plastic depressions at the joints, imperfect seams, and screw-holes. 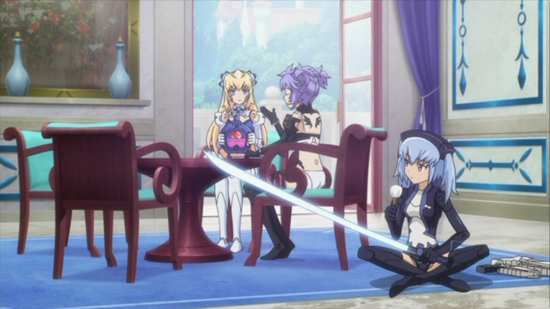 I enjoyed Busou Shinki despite its fan service. It’s a miniaturised, platonic harem show, with a nice balance of comedy and slice-of life drama. It’s got some nice characters, the likeable Ann, the somewhat ditzy Lene, the tomboyish Ines, and the warrior maiden Hina. It has some nice stories as well, including one where Ann spends a day as a human and gets to go on a date with Master, as well as the two-part finale where things get serious when a Shinki collector steals Hina. The bonus final episode is fun as well, serving as a prequel to the show and throwing in a piece of body-swap mayhem. 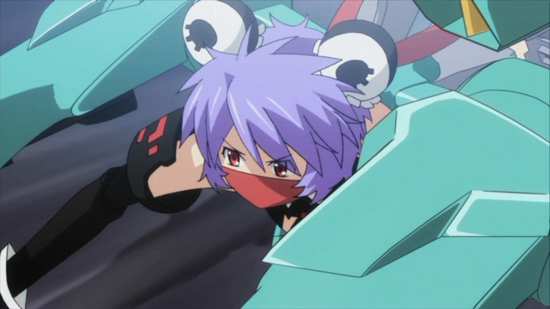 But the fact of the matter is that Busou Shinki isn’t aimed at a human audience. It’s aimed at a clichéd set of anime otaku as an audience. You’ve seen the characters in shows like Genshiken, and Paranoia Agent, the withdrawn obsessives who collect dolls, sorry, anime character figures, one to play with, one to display, and one just in case, the kind of obsessives that will blush at a scantily clad plastic figure, will sneakily try to look up the skirt of one in a shop in Akihabara, the ones that fantasize about them coming to life and becoming their miniature girlfriends. People like that don’t exist, or I hope to God they don’t exist in numbers sufficient enough to justify this series. 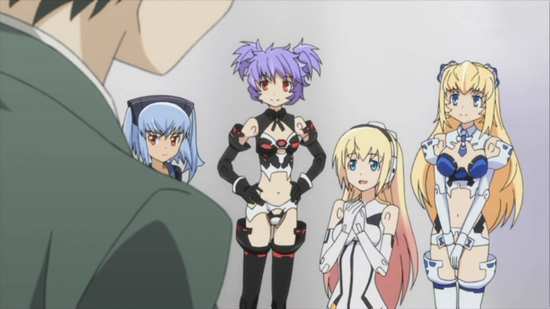 Busou Shinki works if you’re a fifteen year old (or more), who can still access their inner ten year old to appreciate the stories in the show, and can ignore the fan service. Admittedly that seems like a rarified demographic, but if I could do it, anyone can, and Busou Shinki at its best in unchallenging fun.

"People like that don’t exist, or I hope to God they don’t exist in numbers sufficient enough to justify this series."