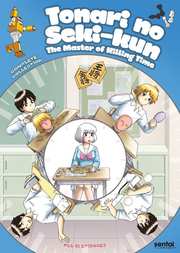 Tonari no Seki-kun The Master of Killing Time (DVD Details) 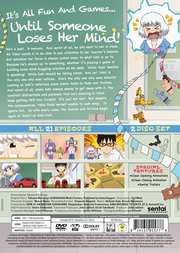 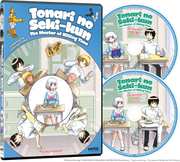 Review for Tonari no Seki-kun The Master of Killing Time

The short form anime doesn’t get a lot of traction on home video in the West, which is odd for a couple of reasons. The first is that I grew up with short form cartoons, the perfectly formed five minute Bugs Bunny or Tom & Jerry. The second is that the Japanese actually make a whole lot of short form anime, and you can find tons of it on sites like Crunchyroll to stream. It could be that the longer form serialised narratives have got us accustomed to getting anime in 20-minute chunks, and even the 4-panel gag manga adaptations get adapted in such a format, dividing an episode into 3 parts but still presented as 20 minutes long. 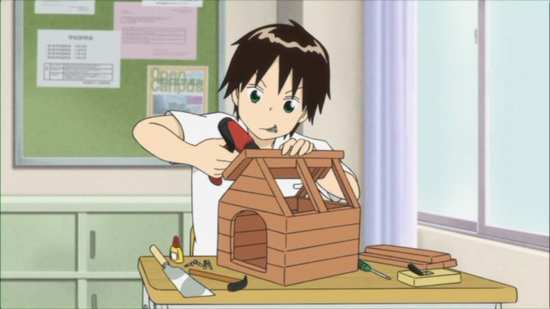 Then again, the short form anime is most likely a comedy, and it will be a low budget animation, hastily put together to fill a broadcasting gap, and as such it will just have the one gag, most likely repeated from one episode to the next. That’s just about watchable on a weekly basis, but when it comes to a DVD or a Blu-ray, you just can’t watch too many of those episodes in one sitting, which is probably why these short comedies remain mostly unlicensed. That doesn’t explain why I shelled out for one of the few such shows that did get licensed, Tonari no Seki-kun or My Neighbour Seki. After all, it’s a short anime comedy at just 7 minutes per episode, it’s a low budget affair, with only one main speaking role, and it’s the same gag week from week. 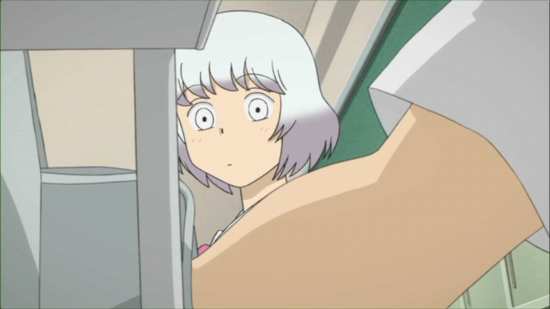 It was easier in our schools if you wanted to learn. The smart, diligent kids would be up front, and the idiots and timewasters would be at the back of the class. It’s harder in Japanese classrooms, where seats are arranged alphabetically. Rumi Yokoi wants to learn, but she’s sat at the back of the class next to Toshinari Seki, who would much rather do anything else. He’s got a fabulous imagination and makes fantastic efforts to waste time. While someone else playing dominos with pencil erasers may line half a dozen up and watch them fall, he brings a few hundred from home, and spends the class creating a world record beating domino course on his school desk. And each week it’s something completely different. With that kind of diligence in slacking off, it’s easy for Yokoi to get distracted by her neighbour to the point that her own education starts to suffer. The thing is that no one else notices Seki’s time wasting, not even the teacher, only Yokoi, and inevitably she gets in trouble for not paying attention in class.

21 episodes of Tonari no Seki-kun are presented across 2 DVD discs from Sentai Filmworks with an 11/10 split. The show is also available on Region A locked Blu-ray. 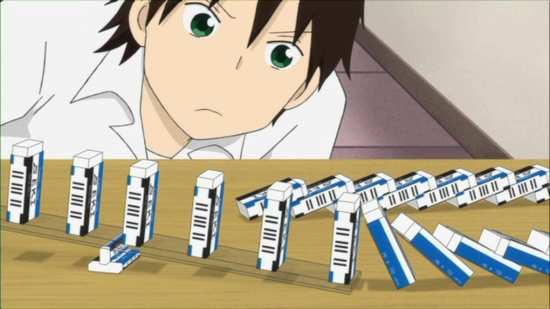 Tonari no Seki-kun gets a 1.78:1 anamorphic NTSC transfer. The image is clear and sharp throughout, with consistent colours and strong detail. There are no issues with compression or aliasing. This isn’t a show where you rave about its visual qualities. It’s a low budget, short animation, with simple character designs and a basic world design. The setting is always in school, and following a brief image of a classroom to set the story up, most of the episode will be focused on the antics of two students at two desks. For the sake of variation, you might get an episode in a science lab or art room, or even the schoolyard, but complexity of art and complex detail isn’t in this show’s remit. It does enough to get its comedy across though, and at no point does it look as if the animation is cutting corners. 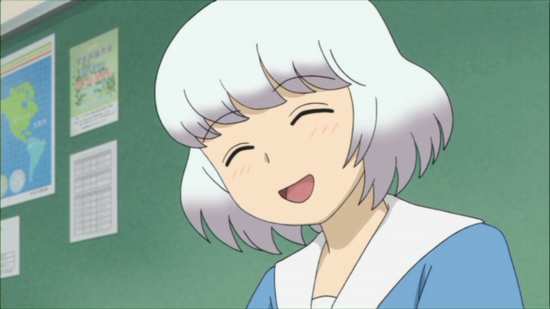 You have the choice between DD 2.0 Stereo English and Japanese with subtitles and signs locked to the appropriate audio. The subtitles are timed accurately, and are free of typos, and you might need the occasional press of the pause button to catch all of the production notes on screen. It’s not the most involved of audio experiences, other than a few extras, an occasional line from a teacher; this show is basically a one-hander, practically narrated by the Yokoi character, punctuated by the odd grunt or sigh from Seki. It doesn’t exactly warrant a surround experience and the most extravagant the sound gets is during the credit sequences. Kana Hanazawa is perfect as Yokoi in the Japanese audio, but I gave the English dub a quick try, and was disappointed by another lacklustre dub from Sentai. It’s a missed opportunity too, as we’re hearing Yokoi’s inner voice for the most part, there are not a lot of lip flaps to fit, and the dub should have been freer, more naturally flowing as a result. Alas, it sounds much like every other Sentai dub. 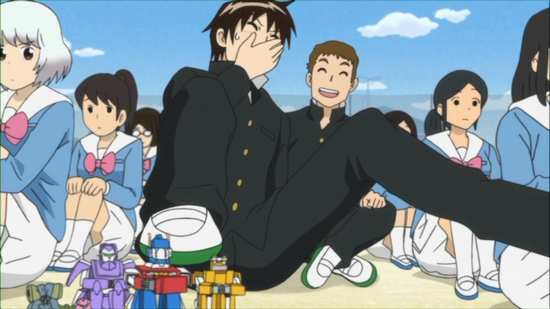 You get 2 discs, one on each inner face of an Amaray case. The discs present their content with static menus, jacket pictures, and each short episode is followed by a translated English credit reel.

Disc 2 has four textless openings and the textless closing. 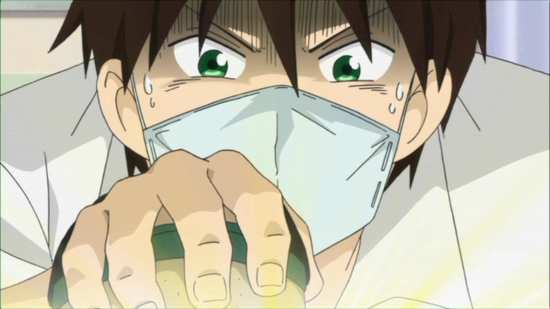 A few years ago, Tonari no Seki-kun was the best thing that I watched streaming. For 21 weeks I tuned in religiously for 7 minutes of comic brilliance, and never once did I come away unsatisfied, un-entertained. However, I knew going into the review that this is not the kind of show that you can marathon. The very nature of its comedy precludes that. For the DVD, I decided to take my time, to watch one episode a night, let it unfold over three weeks, although you could conceivably watch it all in one sitting if you so choose. And it turns out that one episode a night is still too often for Tonari no Seki-kun; this is a show that works best on a weekly schedule. 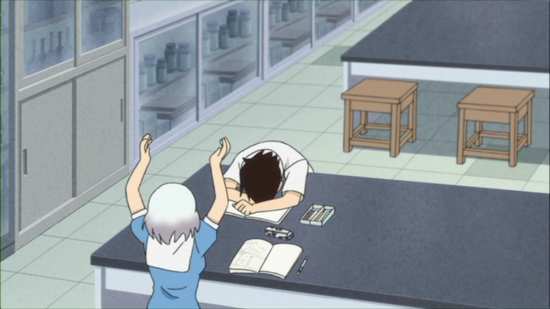 That’s because it really is just the one joke. Yokoi wants to study at school, to work, yet the boy sitting next to her, Seki, spends each lesson goofing off in ever more imaginative ways, distracting Yokoi, frustrating her, annoying her, getting her into trouble, or on a rare occasion, fascinating her as well. The whole show is there in the credits sequences. The opening credits follow Seki as he animates an episode of the show, all the way from storyboards to getting Yokoi to dub her character, while the end credits have Seki banging away at an improvised pencil tin drum kit, with Yokoi trying and failing not to bop to the beat. 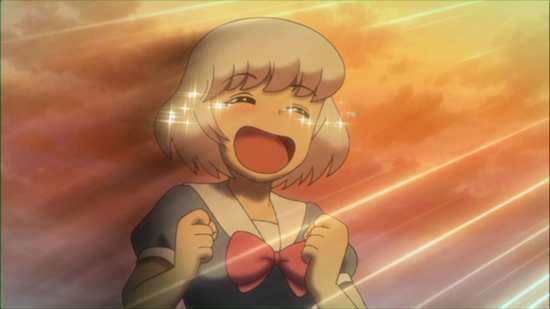 The sustainability of the show comes in the variety of pursuits that Seki indulges. Who hasn’t goofed off during a particularly tedious school lesson? We’ve probably all drawn flickbook animations in the margins of our notebooks and textbooks, and I know that the combination of a biro and eraser can make an adequate stamp. But Seki takes his pursuits to the extreme. His flickbook animation has subtitles and he records a soundtrack for it. And when it comes to turning erasers into stamps, he carves his out with a scalpel, and he’s brought an inkpad for it. There are plenty of board games that get out of control, he turns passing notes in class into a lucrative and bureaucracy bound business, battered and damaged desks become a micro-golf course, a small radio controlled car is an opportunity to take a driving test, lunch turns into an episode of Attack on Titan and so on and so forth. 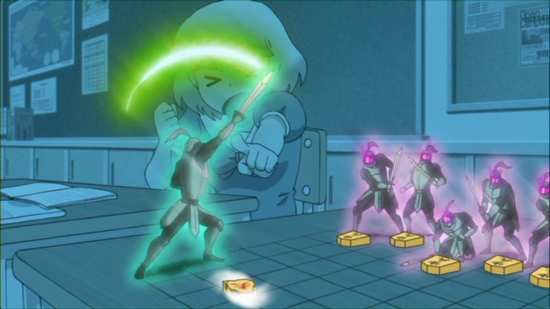 There are a few running gags, particularly with three robot toys that Yokoi becomes fixated on, as well as the Shogi game, and there is the occasional shift in location to the schoolyard, the art classroom or the science classroom, but generally the format of each episode is the same, with only the final episode stepping outside the format, when Seki’s world is threatened when the teacher announces a surprise personal belongings inspection. 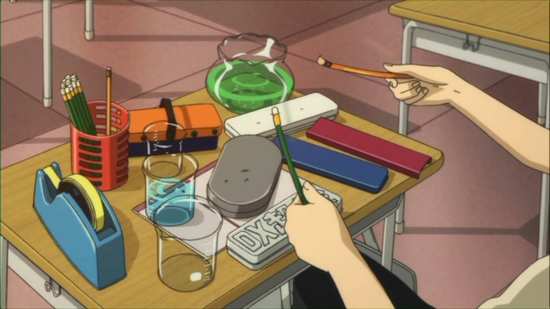 I love this show. It’s a brilliant example of how inventive and original you can be in short form animation. However, it is also wholly unsuited to the home video format. These are not episodes that you can watch in quick succession and get the full level of enjoyment from. You really need to space them apart, and remembering to stick a disc in for seven minutes, once a week might just be too much of a hassle. It would be better to stick the show on your Crunchyroll queue, and just stream one when you feel like it, and buy the DVD or Blu-ray so you have it once Crunchyroll’s licence expires and the show vanishes completely from the online sphere.