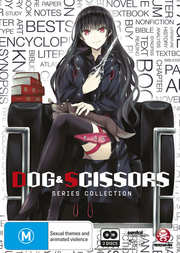 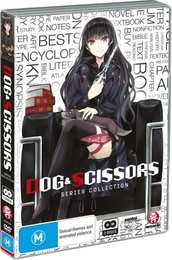 I still blind buy anime, even today although it’s a lot less common occurrence than it used to be. These days, with the benefits of online streaming services allowing you to try before you buy, as well as review sites and anime forums where people discuss shows down to their most trivial details, it’s easy to get a decent cross-section of opinion on how much a show fits with your personal preferences. But sometimes there’s a time limited sale, and sometimes a title comes across that just piques your interest in such a way that reviews and other opinions are just not going to sway you. It’s probably more an indication of my personality that I wasn’t going to let a show named Dog & Scissors slip away! That’s before I even saw the cover with the scissors wielding dominatrix. 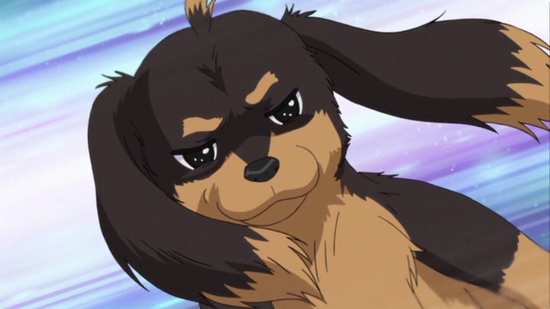 Kazuhito Harumi loved to read. He picked a high school in Tokyo where all the bookstores are, and found a cheap apartment, which quickly became stacked floor to ceiling with books. His favourite author was Shinobu Akiyama, and he loved her Seven Deadly Sins novels, which is just one volume away from completion. Note the past tense, as Kazuhito Harumi is dead. A hold-up in a cafe went tragically wrong, with Harumi on the wrong end of a shot gun. But he wasn’t ready to die, there were too many books left unread, and he got reincarnated... as a dog. 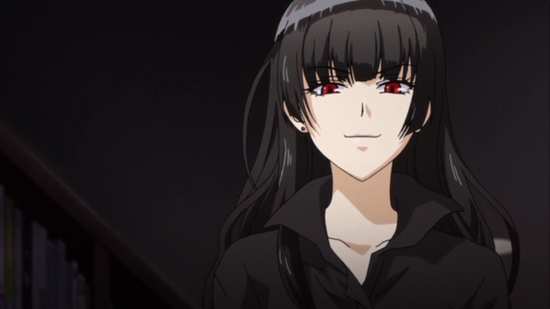 Dogs aren’t exactly known for their love of books, but Harumi’s thoughts actually reach someone. Kirihime Natsuno, the girl who was sitting in that cafe the day he died, can hear his thoughts in her mind, and she winds up adopting this little Dachshund. On the bright side, she lives in a lavish apartment filled with books. On the other hand, she is a total sadist, lethal with a pair of scissors, and would love to dissect her new pet. But more than that, she’s a writer, none other than Harumi’s favourite author, Shinobu Akiyama, and she’s been suffering from writer’s block ever since she saw a teenage boy murdered in the cafe. If Harumi ever wants to read the final volume of his favourite novel series, he’ll have to help her get over her slump. That’s if she doesn’t kill him first. 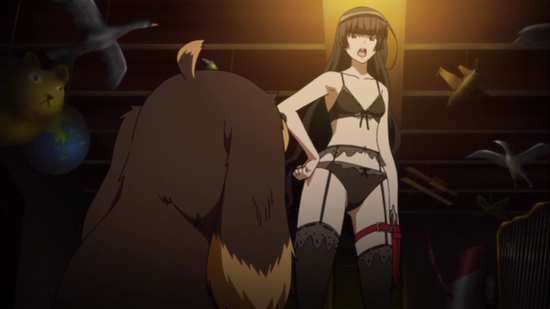 12 episodes of Dog & Scissors are presented across 2 DVDs from Madman Entertainment.

Disc 1
1. Every Dog Has His Day
2. Strike While the Dog is Hot
3. The Winter Dog Flies into the Fire
4. Drowning Men Clutch at Dogs
5. Nothing Ventured, No Dog Gained
6. Rain Settles the Dog

Disc 2
7. The Dog Would Not be Shot but for its Cries
8. Dogs in Moderation
9. There is no Smoke Without Dog
10. Time Flies Like a Dog
11. A Dog by Chance is Preordained
12. Dog and Scissors Require Good Handling 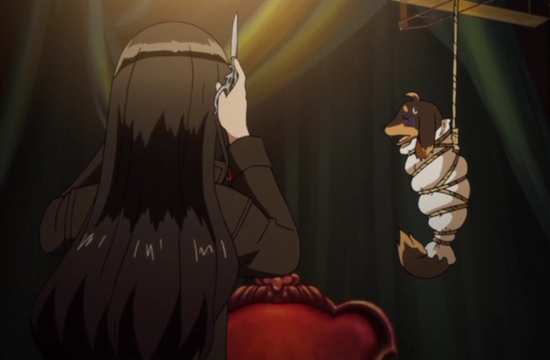 Dog & Scissors gets a 1.78:1 anamorphic PAL transfer from Madman Entertainment. It makes all the right transfer noises, in that it’s clear and sharp throughout, with strong, consistent colours, and there are no visible compression artefacts or aliasing. It looks as good as anime really can on DVD, and it scales up to an HD display without significant issue as well. The thing is that it is a Gonzo animation, one of the last shows that they made during their decline. At their peak they were producing six or seven anime shows a year; in 2013 when Dog & Scissors was made, they made just three, and since then, their output has declined to one show each year. And when you watch the show, you can see why Gonzo’s star has waned. The animation quality looks ten years older than it is, with unimpressive character models, comparatively limited animation, and a very flat feel to proceedings. It does enough to get the story across, but it certainly doesn’t deliver on the promise of the case art. The back cover has a provocative image of Natsuno lounging in her lingerie, scissors slipped into her suspenders. The fan service in the actual show is the least sexy fan service I have seen since Daphne in the Brilliant Blue. 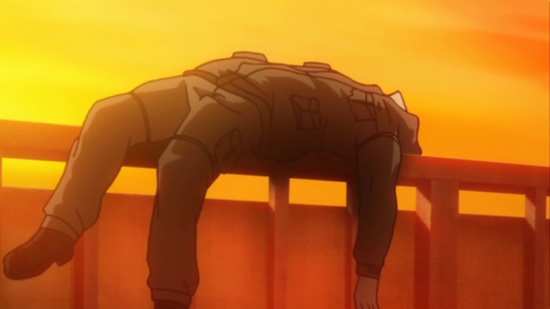 You have the choice between DD 2.0 English and Japanese, with optional subtitles and signs. The Sentai dub is one to avoid in this case, while the Japanese performances at least have character to them. It’s a pretty unimpressive audio experience though, not too exciting when it comes to action or music. The subtitles are accurately timed, and are free of typos, but beware of the production notes and screen text translations. There are a lot of them, and the screen text flashes by almost as quickly as that in the Monogatari franchise. You’ll be using a lot of pause and frame advance to read it all. 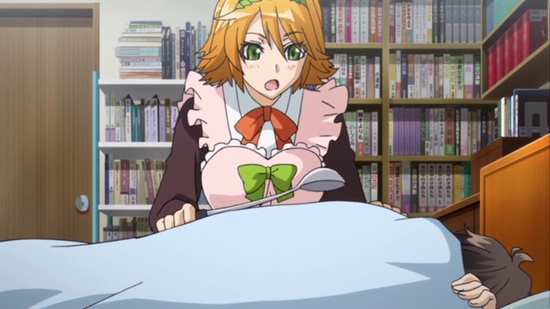 You get 2 discs in an Amaray case, with one on a central hinged panel. The inner sleeve art is a mini-poster featuring the show’s main characters.

The discs boot up to static menus, and this is one of Madman’s recent releases, in that episode names have been replaced by episode numbers in simple, standardised menu options against key art from the show. The usual Sentai translated credits have been removed from the episodes on these discs.

Disc 2 gets the textless credits, and following an Australian anti-piracy thank you, a trailer reel consisting of Ghost in the Shell: Arise Part 1, Hetalia: The Beautiful World (Season 5), Karneval, and Naruto the Movie: Road to Ninja. 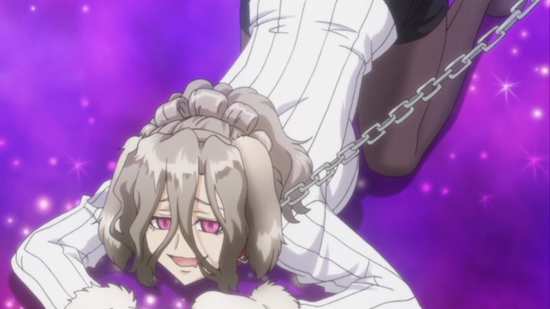 I really have to stop acting on the spur of the moment. Sure, Dog & Scissors is a provocative enough title, and the key art certainly helps sell the concept, but a moment of contemplation might have saved five hours of my time. Dog & Scissors is an utterly forgettable, poorly animated, and tediously realised comedy show, which never even bothers to try and live up to its premise. It’s a generally lamentable series, whose only redeeming value might be the odd moment of smirk-worthy comedy that you’ll find while watching it. It’s not enough to make up for the deflating feeling you get whenever the end credits roll, but for that split second while you watch it, and are marginally amused, this show has a reason to exist. And at least you can say that it isn’t dull, unlike another show which I’m sleeping through right now for review. 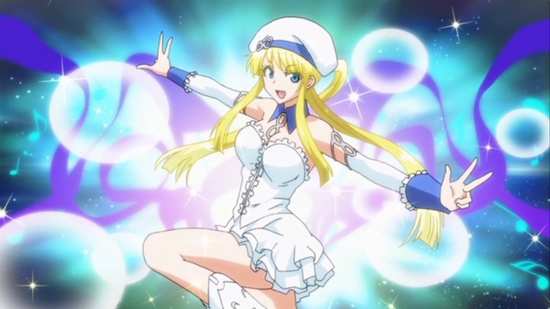 The premise is there. You have a bookworm, a boy who lives for reading, dying to protect a writer in a cafe, only to be reincarnated as a dog that winds up as that writer’s pet dog, and for him to subsequently discover that she’s his favourite author. All this dog wants to do is read, but the problem is that she’s a total sadist, and she can read his thoughts into the bargain. She’s prone to attacking him with a pair of scissors whenever his thoughts stray in the wrong direction. It turns out that she’s got writer’s block, and can’t quite get the final novel in a series started, but when she is challenged by a mystery, a little amateur sleuthing and derring-do with her new canine companion, that gets the creative juices flowing. 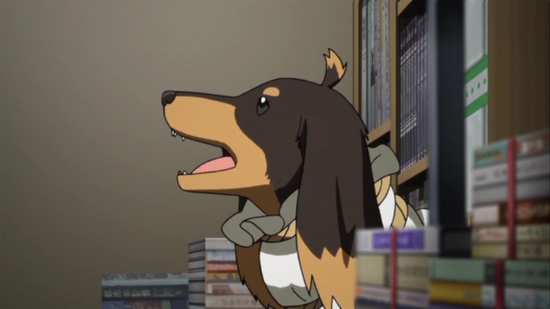 There’s a show in there, the boy turned dog having to face the consequences of his death on those who knew him, the antagonistic relationship with his owner, and the detective stories. Only Dog & Scissors ditches all that for some cheap comedy, and unexciting fan service. It’s a harem show, only this time the central male character is a dog, and the women that gather around him include the boy’s sister, who’s been driven a little batty by his death, a girl working at a local bookstore, and her little sister, the author’s masochistic editor, a couple of rival writers, a singing and dancing maid, and a school friend. They’re all caricatures, not actual characters, defined by a single trait in all cases, with no dimension at all. 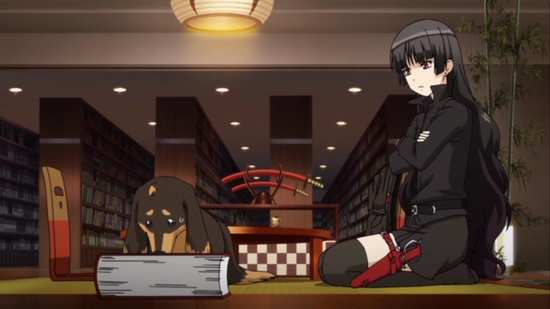 This could have been a decent show but Dog & Scissors never even tried. It’s just an endless litany of stupidity, silliness, and flat-chest jokes. And it gets ever so slightly icky around the halfway point, when the author falls in love with her dog. Nothing ever happens, except a few blushes and wistful gazes, but it’s not something that you’d want to contemplate. Only the creators contemplate it all the way to the final episode when the author gets drunk, and goes on a full on romantic fantasy, and the audience are only saved from the prospect by the inevitable consequence of imbibing too much alcohol. 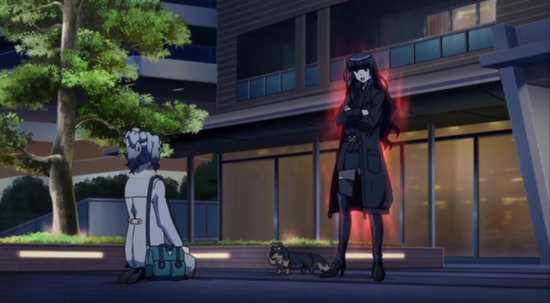 Dog & Scissors is a stupid show, but is it as stupid as someone who’d actually spend money on it? Whatever story it might intend to tell is completely forgotten by the wayside, characters are introduced, and then forgotten, and there is absolutely no narrative satisfaction to be derived from it. It’s just about watchable through sheer force of energy alone, but just because I watched it, there’s no reason for anyone else to do so. In fact, consider this review fair warning not to judge an anime by its cover, or title.