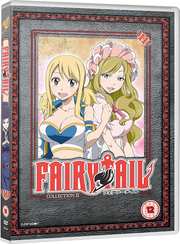 We may have had a painfully long wait between Manga’s Part 9, and Funimation’s Part 10 of Fairy Tail, but we are practically flying along with the show now. It hasn’t been too long since I posted that review for Part 10, and little more than a month afterwards, I’m now sitting down with the check discs for Part 11. Two episodes in, and the check discs for Part 12 land on my doormat. Then again, we have a lot of catching up to do, as the US release is already up to the penultimate Part 22. I’m feeling so confident that we’ll see Fairy Tail through to the end now, that this Christmas, I went and replaced that Part 9 release from Manga with an import that isn’t broken. 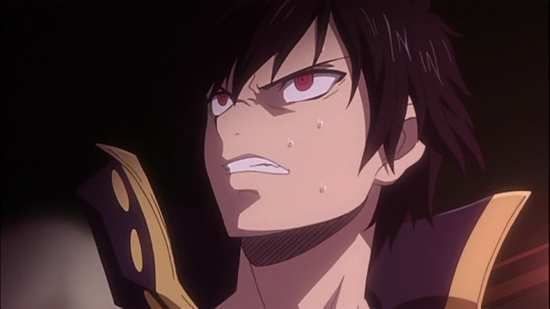 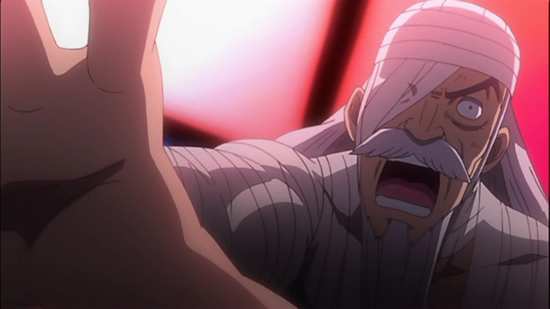 Funimation release the next eleven episodes (we get one fewer this time around) of Fairy Tail across two discs, and all things seem well in the Fairy Tail Guild. The battle against Grimoire Heart is over, the danger averted, and the guild members on the restored Tenrou Island can finally relax. Makarov is already thinking about the cute uniforms he can dress the female guild members in when they get back to the mainland, so it seems everything is back to normal. Only Zeref has caught up to Grimoire Heart, who are fleeing Tenrou Island and Zeref’s in a bad mood. Grimoire Heart has reawakened Acnologia, and they are about to pay for that impudence. There’s an ominous rumble, a dragon heading for Tenrou Island, and the destiny of the Fairy Tail Guild is about to be irrevocably altered. 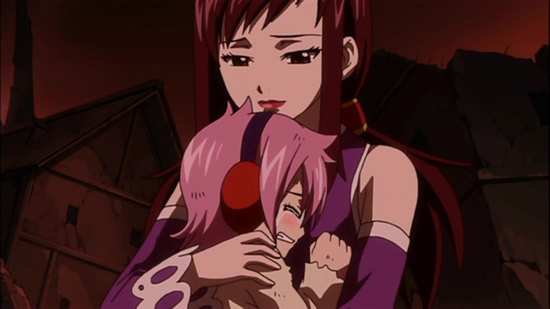 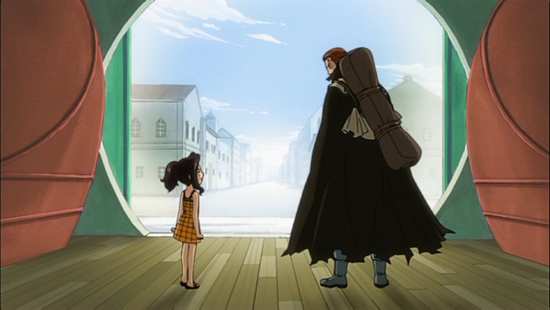 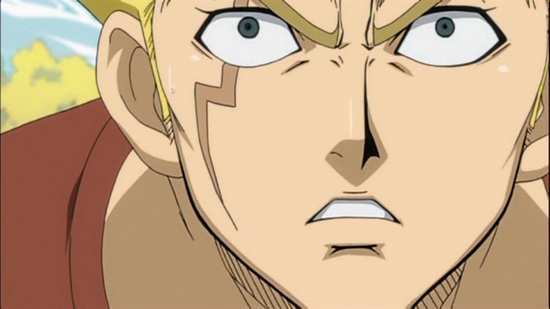 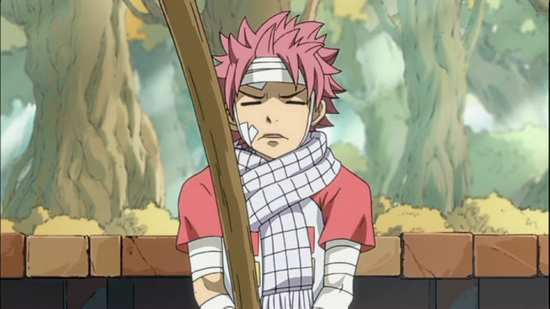 Disc 1 autoplays with a trailer for Ben-to, and the only extra is a commentary on episode 126, featuring ADR Director Tyler Walker, with the Butt-Jiggle Gang, J. Paul Slavens, Jeff Johnson, and Greg Silva. 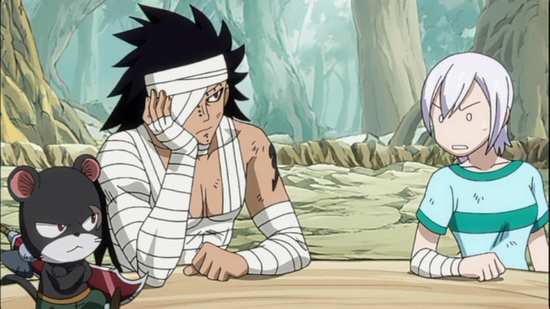 We also get a featurette which lasts 12:40, which follows Natsu voice actor Todd Haberkorn as he spends a few days at the Otakon 2013 convention in Baltimore.

You get the US trailer for this volume and further trailers for A Certain Scientific Railgun S, Shakugan no Shana S2, Toriko, Dragon Ball Z S5, Code Breaker and Red Data Girl.

Finally there are the textless credits, two openings, and two closings, and remember to turn the subtitles off to render them truly textless. 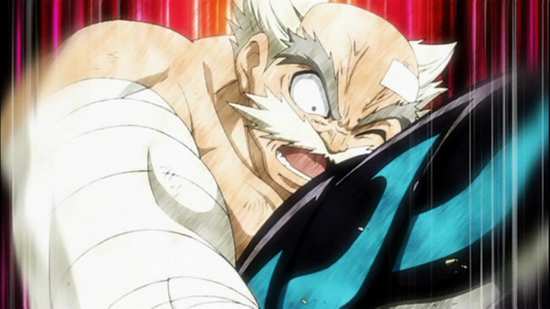 This Tenrou island arc has been fantastic. The episodes in collection 9 were good, technical issues with the disc notwithstanding, and the previous collection was Fairy Tail at its finest. As I started watching this collection, I asked myself why I don’t rate Fairy Tail as highly as One Piece. After all, Fairy Tail has strong animation, and great music, the story is good, the characters are vivid and entertaining, and when it comes to emotional resonance, grabbing the viewer by the feels, Fairy Tail is actually unsurpassed when it comes to long running shonen anime. Yet even now when I think about the genre, it’s One Piece, Naruto and Bleach that come to mind, with Fairy Tail as an afterthought. Then I got to episode 125 in this collection, and I remembered why. It’s where we begin another filler arc. 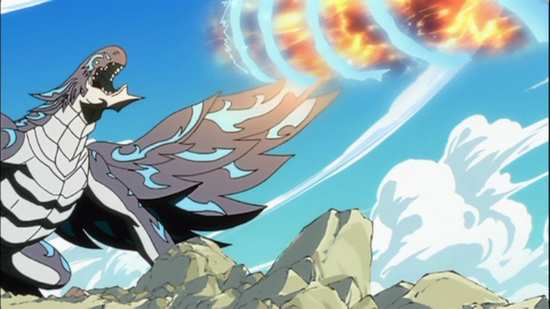 The canon manga storyline from Hiro Mashima is great, fantastic. Take this Tenrou Island arc, the preceding Edolas arc, and all the other story arcs to this point, and they are brimming with character, story, humour, drama and emotion. The animators of Fairy Tail have one of the best manga to adapt, and they pull it off with style. But as usually happens with long running anime, they catch up to the manga at some point, and run out of story to adapt, and they either have to put the show on hiatus until there is more, or they fill the gap with original storylines created in studio, which don’t advance the canon story along, don’t develop the characters, or if they do, there’s a big reset button applied to take things back to where they were when the manga story paused. Some shows can pull of decent filler, some can actually make filler better than the manga. Fairy Tail gets the work experience guy in to write the filler episodes. 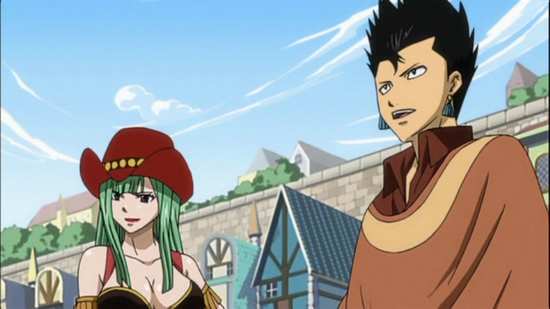 It starts off so well, with the conclusion of the Tenrou Island arc. It all seems happy and celebratory for the Fairy Tail members on the island, having defeated the plans of Grimoire Heart. It’s almost a party atmosphere, but it turns out that Zeref hasn’t quite finished with them yet, and has a bone to pick with those who disturbed his rest. His wrath against Grimoire Heart is immediate, but the unleashing of the massive and destructive dragon Acnologia against Tenrou Island is almost collateral damage. The island is obliterated completely from the face of the world, or that is what everyone comes to believe. 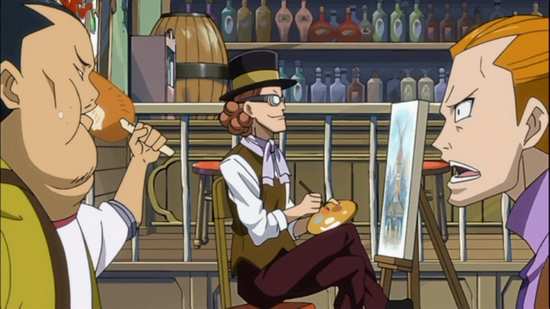 Why is it that long running shonen shows have time skips? Naruto jumped ahead two years in between its first series and Shippuden, and we’re due a time skip in One Piece. If Bleach hadn’t ended prematurely, I’m sure we’d have jumped ahead a few years there as well. There’s a seven year time skip in Fairy Tail, and when we rejoin the series, we find the previously pre-eminent Fairy Tail Guild has been relegated to a small player in Magnolia. The surviving members are the weakest of Fairy Tail, and they haven’t been able to maintain the guild’s standing. We also see what effect seven years of grief and loss following the Tenrou Island incident has borne on them, as well as some of the changes that have taken place, marriages, births, weight losses and gains. Of course it wouldn’t be much of a series if the main characters had actually been wiped out, and their return, not having aged a day, is a cause for celebration, albeit tinged with a sense of loss. That’s emphasised when Lucy goes looking for her father after her return. 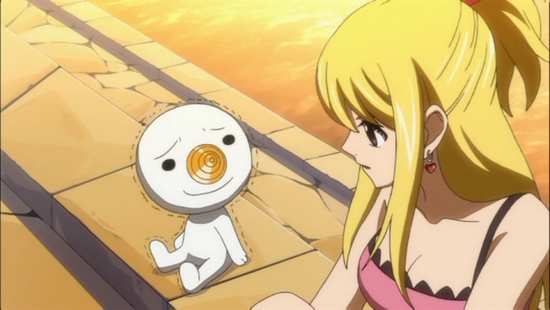 It’s a wonderfully told story, and once again, each episode will entertain, amuse, and move, with a mix of action, comedy and character drama. Whether it’s Meldy and Ultear’s reconciliation, Cana telling Gildarts the truth that she’s been hiding, the Fairy Tail wizards’ last stand against Acnologia, the return of the Fairy Tail, and Lucy’s search for her father, there are plenty of moments that will get a lump in the throat, a little something in the eye. 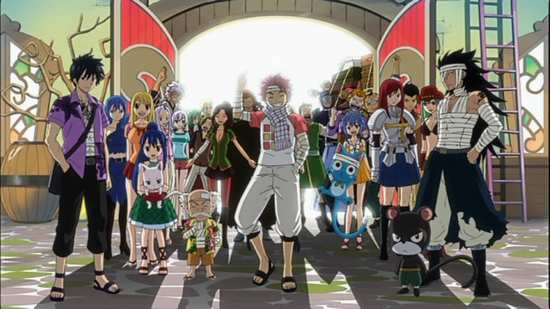 Then the filler starts, and it all falls apart. They try to write stories on a par with the canon storyline, but they get the mix all wrong. The action might be entertaining enough, if not quite as emotionally resonant, but the humour becomes puerile (wait until you meet the Butt Jiggle gang), and any attempt to capture the viewers’ emotions by putting the characters through the proverbial wringer is blatantly manipulative, clumsily executed, and wholly contrived. Leading on from Lucy’s revelation at the end of the previous arc, this filler stretch starts a new story arc, with a new set of villains who show up looking for a memento of Lucy’s father, which has been brought to her by a long-lost distant relative named Michelle Lobster. 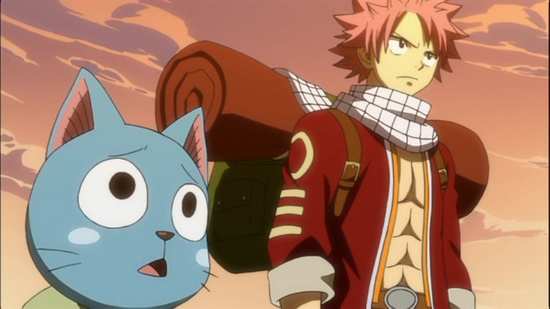 There are a couple of standalone episodes, the aforementioned Butt-Jiggle episode, with its triumvirate of flatulent comedy villains, an episode where Lucy gets naked and invisible, an anticlimactic fight episode between Natsu and Laxus, but the only decent stand alone episode in the lot is a job they take providing security at a ball, and since they’re attending a ball, they have to learn how to dance. The rest is an overarching storyline that features villains that are the Earth-Land counterparts of characters we met in the Edolas arc, a plot against churches, and the aforementioned memento of her father that Lucy receives. It’s a story that plods adequately along, but it’s poorly directed, and unexciting (a confrontation between Gildarts and head villain Byro is a case in point; 2 dull people pontificating at each other). 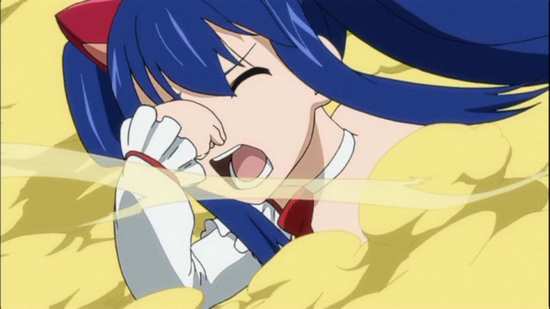 Fairy Tail is one of the best long running shonen shows out there. Except when it’s filler when it becomes one of the worst. You get both sides of Fairy Tail in this collection, but sadly this is where a pretty lengthy filler arc commences, from episode 125 all the way to episode 150. That means that collection 12 of Fairy Tail will have to do a whole lot to rise above mediocrity.