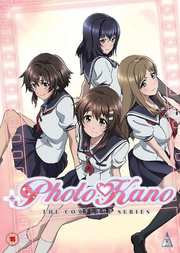 You hear rumours about anime licensing deals, about how certain lacklustre shows get bundled with the likely hits, so that a little more money flows up the anime chain, while distributors get lumbered with shows that could be considered stinkers. And of course that pain gets passed down the licensing chain from Japan, to the US, to Australia and eventually here. That little outburst of pessimism is provoked by this show, Photo Kano, where I do have to wonder just why it is getting a home video release. It certainly didn’t inspire me when I watched it streamed a few years ago. The premise says it all. A boy takes up photography as a hobby, and winds up convincing girls to strip down to their scanties, so that he can take a few salacious photographs. It adapts a dating simulation game, so you can guess where the show is coming from, and just who it’s targeted at. But maybe I got it wrong. Maybe there is more to this show than the Donald Trump attitude towards women... 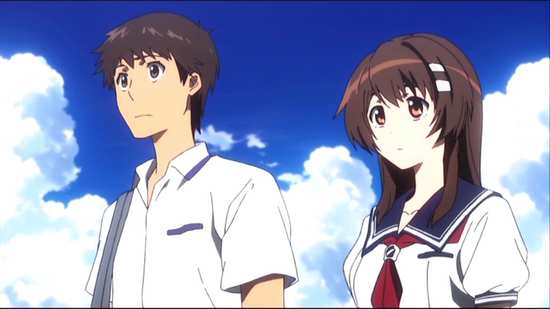 Kazuya Maeda is a high school student whose easygoing attitude to life is matched by his easy-going school, where it seems there’s more emphasis on the after-school clubs than education. He’s got something of a reputation as a dilettante, hopping from hobby to hobby (his friend Nonoka calls him Dartsie, as Darts was the pastime he stuck with the longest), but that all changes when he gets a camera handed down to him from his father. 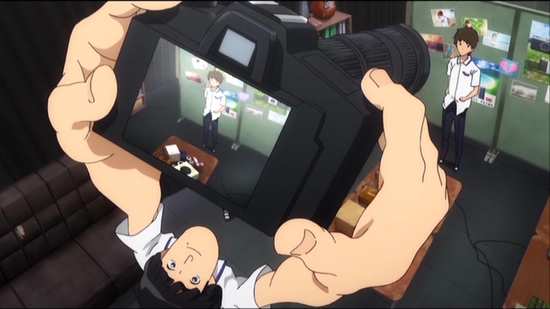 His eye for composition and his ability to put his subject at ease catches the attention of the Photography Club, and the Photo Club. The two clubs are antipathetic, but share a club room, discretely divided by a curtain. The Photo Club is all about landscapes and still life images. The Photography Club pays more attention to the female form, particularly the female students in high school, and they’re underhand when it comes to getting their photos. Despite his misgivings, Maeda chooses to join the Photography Club, ostensibly to protect his childhood friend (and hottest girl in school) Haruka Niimi from their perverted lenses, but it turns out that he really has got a talent for putting his subjects at ease, and getting them to pose for photos that they’d normally wouldn’t consider. 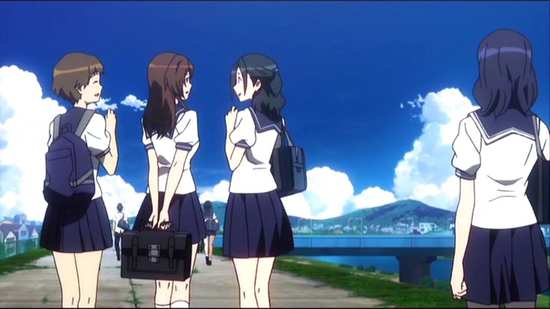 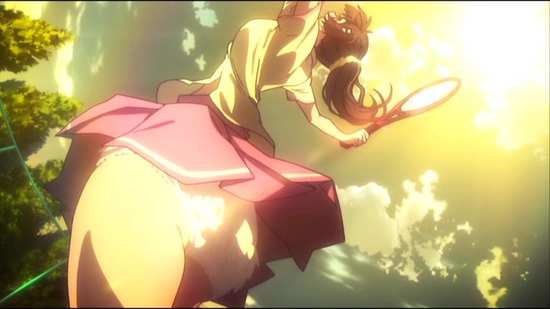 Photo Kano gets a 1.78:1 anamorphic transfer on these DVD discs, which courtesy of Australia’s Hanabee Entertainment gets the native PAL conversion, complete with 4% speedup. It’s actually been a while since I’ve seen one of these, but Photo Kano’s is a good one, with no artefacting, judder, just smooth animation, which courtesy of the HD master makes the full use of PAL’s higher resolution. The image is clear throughout, detail is good, colours are consistent, and the animation is smooth and fluid. Given that this is such a fan service show, you can bet that the character designs, especially the female characters, are pleasant and appealing, and remain on model throughout, regardless of whichever sexy pose might be employed at that moment in time. The world design is agreeable and sufficiently detailed, while another layer of service comes from the camera designs realised in the show. It’s a good looking show, especially for the photo-shoot sequences, and you can see how it might benefit from a Blu-ray purchase instead of this DVD. 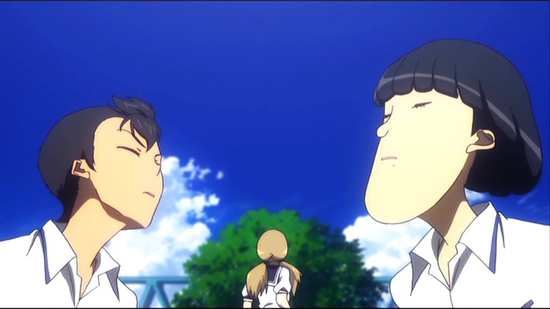 The audio on this release is a simple DD 2.0 Stereo Japanese track with optional English subtitles. The dialogue is clear throughout, the subtitles are accurately timed and free of typos, and the actors are suited to their roles, giving entertaining performances. Photo Kano has a couple of very appealing theme songs, and decent animation to go with them. I’d even go as far as saying the credit sequences were what I looked forward to most in the show, which doesn’t bode well for this review. 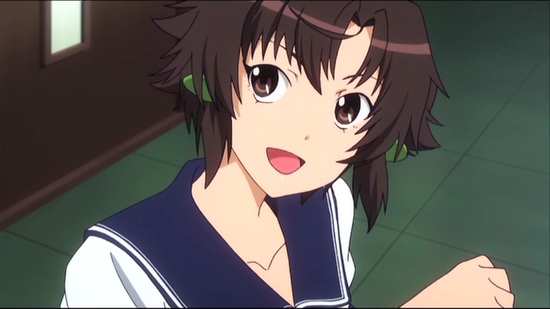 The discs present their content with static menus. Each disc has one single translated credit reel at the end of each collection of episodes. 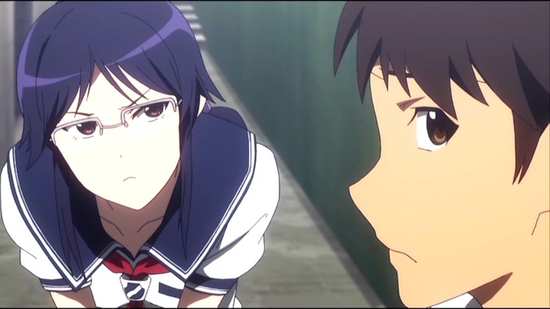 Oh dear... Photo Kano isn’t the first anime to adapt a dating simulation, but it has to be the laziest. A dating simulation, as you might expect, gives you a choice of partners to date (they’re usually girls, as these games are targeted at male audiences), you choose one, and you play the game through to its conclusion, the happily ever after moment. It’s either a chaste kiss under a tree or a mosaic plastered pornographic image depending on the age rating of the game. At which point you are free to start the game over again and follow a story route featuring another girl. The point being that the gamer gets to ‘collect’ them all, unlocking all of the game’s secrets along the way. It doesn’t exactly do anything about the objectification of women, and it feeds into an idealistic and collector’s mentality in the players, a removal from reality. As with all things, these games can be fun enough in moderation. 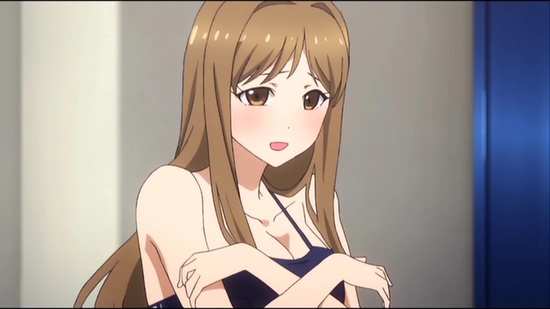 Adapting them to anime can be a head scratcher, and the usual route is to pick the most agreeable of the female characters, and adapt that story in an anime, bringing in the other potential dates and developing their subplots as far as possible without derailing the two main characters’ romance. It’s how shows like Kanon and Shuffle have operated in the past. Photo Kano is having none of that! It’s adapting all of the girls’ routes one by one. It’s ‘cake and eat it’ time. It does this by introducing the characters and setting up the situation in the first four episodes, allowing for a handful of first meetings between Maeda and his potential mates. 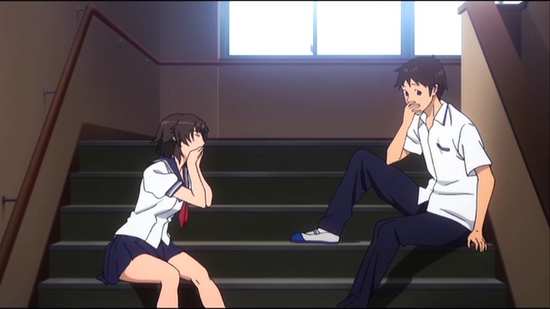 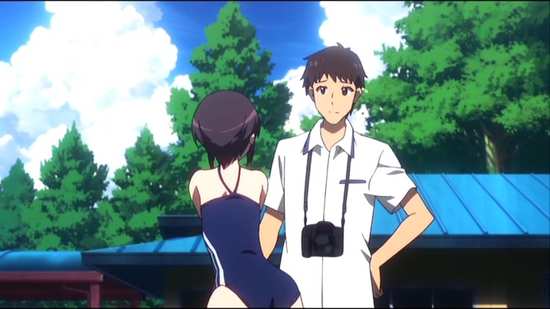 But from episode five onwards, we’re in full on conquest mode. He takes two episodes to woo his childhood friend Haruka Niimi, but with episode seven we reset back to the end of episode 4 and start all over again with another girl. Haruka got the most attention (I guess she was the most popular conquest in the game) with two episodes, but the other girls just get one episode apiece for Maeda to ‘collect’ them. I’m being insensitive of course. It’s the collect-em-up approach of the anime that intensifies its negative qualities, and actually any one story, taken by itself is usually a pretty sweet romance, a little heartfelt, a little moving, and with characters that you just might root for. If the whole series had been about one pairing, and it worked through the romance over 12 episodes or so, it would have been better. On a weekly streaming schedule it seemed exploitative, but marathoning the show on DVD just makes it feel wholly crass. 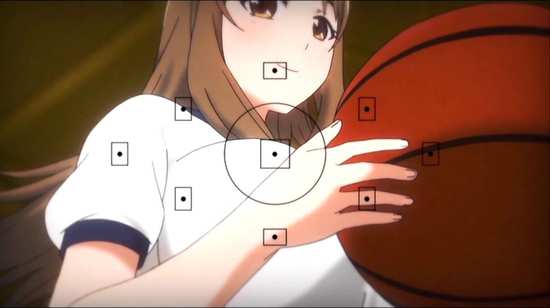 Watch an episode occasionally, and Photo Kano is just about okay, it isn’t as offensive as its premise implies. There are 12 episodes, watchable after a fashion on these two discs. That’s twelve episodes out of thirteen. Because episode 13 does go there, it does the little sister route. Maeda romances his little sister Kanon, and it throws us the bone of ‘oh, they’re not actually blood relations’ because that makes it all okay! With this episode I was telling this show to ‘go forth and multiply, go the hell forth and multiply, you forthright multiplier!’ If I could scratch out the bonus episode (episode 12 ends as if it is the end of the series) without killing the disc I would. Photo Kano is an utterly mediocre and mildly offensive show that is watchable enough... until the incest. You have been warned.