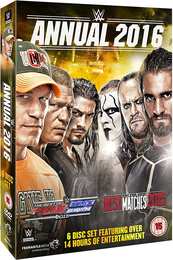 Synopsis:
Relive every jaw dropping moment from last year with this 6 DISC collection bringing together THE BEST OF RAW AND SMACKDOWN 2015 and THE BEST PAY-PER-VIEW MATCHES 2015.

Featuring over 14 hours of the best WWE action, witness the final match of a Sports Entertainment Icon, epic battles between a Beast and a Deadman, a Divas Revolution and much much more!

THE BEST OF RAW AND SMACKDOWN 2015

See the best 2015 had to offer featuring Superstars like JOHN CENA, SETH ROLLINS, BROCK LESNAR, BRAY WYATT, DEAN AMBROSE, ROMAN REIGNS, PAIGE, THE BELLA TWINS, THE AUTHORITY and all your favourites as they brought the WWE Universe to their feet on RAW and SmackDown!

Experience every major moment, every return, every debut and every epic matchup and see why 2015 was a year that will go down as one of the best in WWE history.

New champions were crowned, legends returned, new faces arrived and the WWE Superstars and Divas delivered some of the best pay-per-view matches in WWE history.