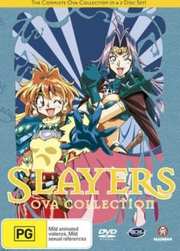 Synopsis:
The final collection every Slayers fan has been asking for! Contains 6 Episodes in this two part OVA series. In these earlier adventures of Lina Inverse and Naga the Serpent, learn how the two rivals first met.

Slayers: Book Of Spells contains the three episodes: The Scary Chimera Plan, Jeffery's Knighthood, and Mirror, Mirror. In the annals of fantasy there is no mage as feared, no sorcerer as powerful as the fiery redhead Lina Inverse. And when the exceptionally well-endowed Naga the Serpent accompanies her, the forces of evil will find there's nowhere to hide. Now, for the first time, their original three adventures will be available. Join Lina and Naga as they thwart a plan to create the ultimate chimera, with Lina as one of the heads! Struggle with them as they attempt to turn the effeminate son of a noble family into a man deserving of appointment to the Royal Guard. And double the trouble, and the fun, when our intrepid heroines take on a rogue magic user with a mirror that puts his enemies in reverse.

Slayers: Excellent - In these earlier adventures of Lina Inverse and Naga the Serpent, learn how the two rivals first met. In their first adventure, our heroines run into a vampire during a rescue mission. Next, Lina is hired to be the bodyguard of a rich man's daughter, Sirene. Enthusiastic at first, as she is being paid very well, Sirene soon becomes more trouble than she's worth. In the final episode, Lina and Naga find themselves on seperate sides in a fashion war. And, formal fashion designer Tatjana Dayward and unisex clothing maker Marty Lenford discover Naga and set out to make her the next fashion craze!