DVD
Keep it Up Downstairs

DVD
My Wife Next Door - The Complete Series
Related Articles

Article
Top Gear: Best of British and 14 Diaries of the Great War come to DVD in August
Recently Added Items 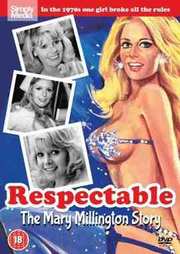 Synopsis:
In the 1970s there was a pretty English girl-next-door whose rise to the top was meteoric, controversial and scandalous. Her name was Mary Millington Britain s only genuine sex superstar. She became the star of 'Come Play with Me', which ran continuously at one London cinema for four years, and is still the longest-running movie in British cinema history. But Mary s sexual bravado hid a darker side. She fought crippling insecurity and struggled to find her voice in a tumultuous decade of social change. Persecuted by the authorities and threatened with a spell in prison, Mary found herself addicted to drugs. Tortured by self-doubt, she died at the height of her fame in August 1979. She was just 33. For the very first time, Simon Sheridan s enthralling documentary 'Respectable The Mary Millington Story' reveals the truth behind a British icon and speaks to those who knew her best, including her family, former lovers and co-stars. Actor Dexter Fletcher narrates a story stranger than any fiction of lost innocence, fame, fortune and tragedy. This is the shocking, untold, true story of 1970s rebellion, painted against a backdrop of disco, politics and porn, where a beautiful blonde girl was sacrificed for her beliefs.