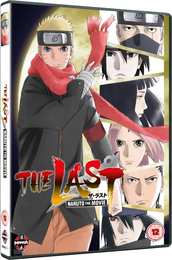 Review for Naruto the Movie: The Last

The January review discs from Animatsu and Manga turned up, and this month instead of the usual pressed check discs, we have single layer DVD-R screeners. Despite the fact that they are copies of the final retail discs, this review will be useless if you are looking to see what the AV quality is like. With the compression (in a couple of cases almost 4 hours of video on a single layer disc), these discs aren’t in any way representative of the retail copies. The review will be about the content only. If there is a bright side, I don’t have to write as damned much!

Don’t say I didn’t warn you. I have to say that this is a dumb time to release the final (until they went and recently released Boruto) Naruto movie. For one thing it is for a change a canon story, written by Naruto creator Masashi Kishimoto, with its tale fitting in between the penultimate and final manga chapters. We’re nowhere near that point when it comes to the UK, US or indeed broadcast anime releases, so watching this film, set two years after the end of the main storyline, there will be a whole lot of “Why is he, why is she, what happened to, when did, why did, etc?” And let’s face it, if you watch The Last now, you’ve effectively spoiled the manga ending. This movie should not be released at this time, but tell that to all of the distributors right the way back up the licensing chain to Japan, where it was also released far too early, assuming all of the Naruto fans had read the manga to conclusion, and weren’t solely relying on the anime series for their fix. I’ll try and avoid spoilers, but they are going to be inevitable in this review. 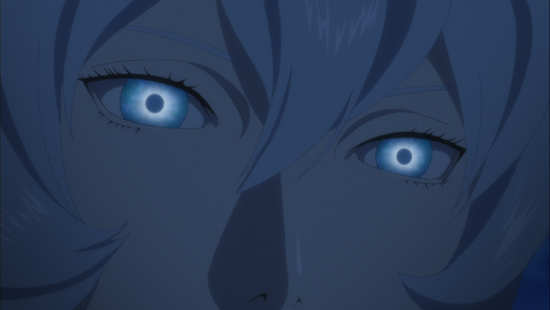 Two years after the main manga storyline, Naruto is a major hero because of stuff, but he’s still dense when it comes to relationships, which can be painful to watch when he has groupies fawning all over him. Painful for Hinata, who’s still nursing a crush on Naruto that has lasted ever since they were children, and he protected her from a bunch of bullies, losing his scarf in the process. Hinata’s been knitting a scarf for Naruto, and is trying to work up the gumption to give it to him.

But all this happy relationship angst is about to be interrupted by the end of the world. The moon has started to fall towards the Earth, and the gravitational stress will soon break it up, the resulting meteor storm destroying the planet. For a millennia old prophecy is about to come to pass, one that centres on the Hyuga bloodline and their Byakugan ability. When Hinata’s younger sister Hanabi is kidnapped by an enigmatic ninja named Toneri, Shikamaru, Naruto, Sakura, Sai and Hinata are sent on a mission to rescue her, as the Hokage has a hunch that by doing so they will save the world. But to do so, they’ll have to boldly go where no ninja has gone before! 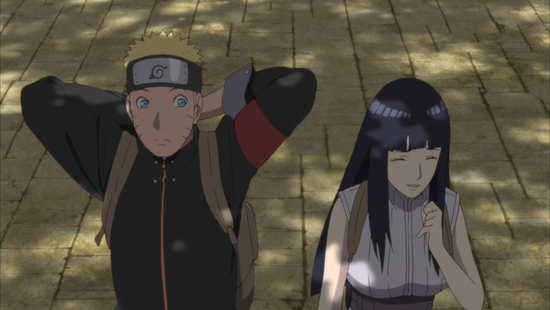 1.85:1 anamorphic NTSC with Dolby Digital 5.1 Surround English and Japanese, with a sole English subtitle track; those are your DVD specs.

The disc presents the content with static menus. You should have Movie Trailers, Movie Promos, Movie Commercials, an Art Gallery and further trailers. I didn’t, because the DVD-R apparently stopped recording halfway through the first extra. I guess I’m lucky the whole movie was on here! 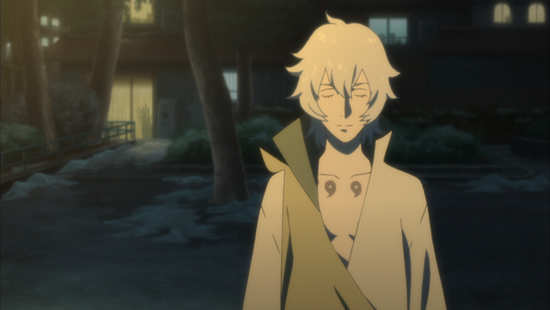 Naruto does sci-fi! There are ways that stories should end, and there are ways that they shouldn’t and this is definitely one of the shouldn’ts. The time for experimenting with a franchise is in the middle of the run, when fatigue might be setting in, and creators need new ideas and drastic paradigm shifts to get the juices flowing again, much in the same way that Mamoru Hosoda’s One Piece movie differs from the rest of that franchise. But the end of the run needs a final blast that pays homage to what has come before, gives the audience their fan favourite moments, and leaves on a hopeful note for the future. Given the sci-fi bent to this movie, the ideal example of the right tone to strike would be Star Trek VI. Instead we get Flash Gordon. No, seriously Masashi Kishimoto has pretty much lifted the plot of Flash Gordon, and thrown in just a smidge of Moonraker. 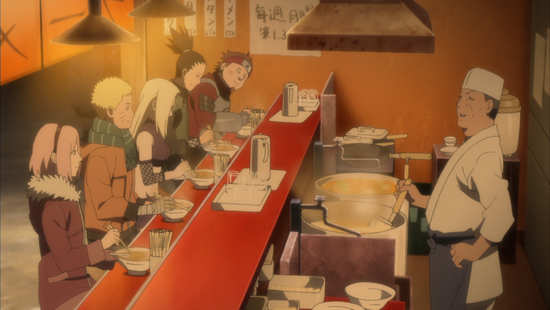 The moon ninja Toneri is sick of what people are doing to the Earth, so in true Hugo Drax/Nemo style he’s decided to end the world and start all over again, for which he needs Byakugan eyes, so that he can send the moon crashing into the earth. That’s why he kidnaps Hanabi and also goes after Hinata. So Naruto ‘Flash’ Uzumaki and his friends have to take one small step for ninja-kind (thanks to a magical mystical moon pool portal) and go and face Toneri the Merciless and stop him from destroying the world. And yes, Ming and Dale are also about to get married as the world ends before Flash saves Dale in the nick of time and they all live happily ever after. 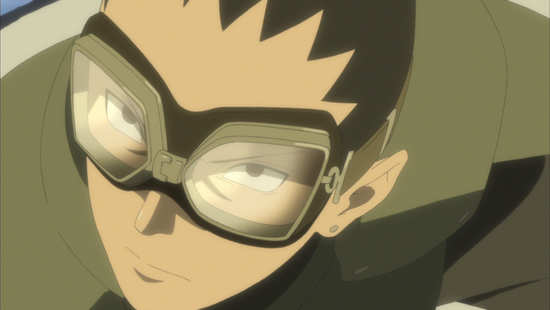 One other issue I have with the film, somewhat predictable given where we are in the narrative, is that Naruto is just too powerful a character now. He’s not exactly Son Goku, Super Saiyan Level Infinity Universe Shatterer strong, but when celestial bodies start being sliced in two, you begin longing for that inept, wannabe ninja from the first few seasons, fallible and imperfect, allowing for a story with a genuine sense of peril for the main character. In this movie Naruto might as well be One Punch Man. He even gets his chakra sucked out him at one point, so he can lie in a coma, while 20 minutes of the movie is spent on narrative, and character and stuff that would otherwise be mown down by a Rasen-Shuriken. 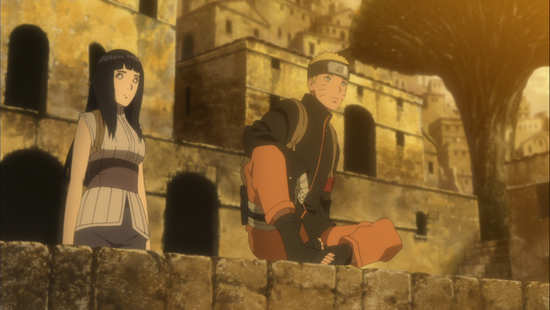 If there is a positive aspect to The Last, it’s the Flash Dale relationship (Hey, this Flash Gordon analogy is useful for rendering the spoilers oblique). Following years of dense obliviousness on his part, and stuttering, blushing failure to communicate on her part, this film is finally that point in the story where she connects, he realises, they’re about to have their happily ever after, but one final daft test gets in their way before true love can triumph. If you’ve invested in their relationship, then this film will provide adequate closure. The funny thing is that he is so dense that it actually takes a trip through the magical mystical mind-reading moon pool portal for him to get the message. 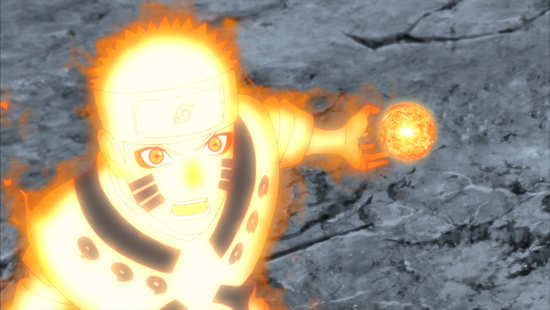 Despite this being “The Last” Naruto movie, there’s Boruto up next, or Naruto: The Next Generation. Frankly, if this film is anything to go by, I’m not looking forward to it. The Last is a dismal effort for the final Naruto movie proper, a wholly inappropriate and ridiculously over the top genre shift to sci-fi, redeemed only partially by the long-awaited romance of the two main characters. I’m beginning to dread the later TV series now, as it’s become obvious that somewhere in between the fantastic Road to Ninja movie, and The Last, Naruto jumps the shark.

Funny thing about Japanese animation and storytelling is that some stories I specifically like, but cannot go the type of series above which has Japanese romance and relationship details, which seems to be very heavy going, affecting the story plot.

Not quite sure who the target audience should be for above review other than teenage girls. Plus all that's missing is the cuddly animals (heros or demigods) that the Japanese like to put in their animations :D

I prefer fantasy and si-fi type Japanese style of Studio Gibii specifically, which seems to hit the nail on the head every time), Ghost in the shell film and its spinoff series is another, and my favorite being the Animatrix, (animated stories in 'The Matrix' world, made by a lot of well known Japanese animators, its really worth watching, just to know the dangers of Robot/computer AI of the future).

Conclusion: Considering the premium cost of a Japanese animation films available in the UK, I have to be very particular about choosing which ones I buy, and your reviews are very useful to make that decision.
posted by bandicoot on 20/1/2016 15:45
​Just for the record, contrary to relatively popular belief, Kishimoto didn't actually write this or Road to Ninja; he 'oversaw' and provided designs for the two, but beyond that I don't know how much or how little input he had with the plot. Given he was still busy finishing up the manga (and that he actually -did- write the Boruto movie himself from start to finish), I'd imagine he didn't offer much more than creative guidance in terms of input.

But yes, that makes this (so far, at least) the one piece of Naruto media not written by Kishimoto that's also 100% confirmed canon, and I'm not sure that sits too well with me. As you said, it's all a bit too 'out there' for the series and in spite of its canon status it still feels a bit fillerish and like it doesn't quite belong.

The general reception of this movie seems to be "The characterisation between Naruto and Hinata is nice, but the obligatory shoehorned Shonen action is kind of dumb".

Thankfully, as I mentioned above, the Boruto movie actually -is- written entirely by Kishimoto, and frankly, it really shows in that it's easily the best Naruto movie by far (in my opinion, anyway) and the only one that -genuinely- feels like an actual part of the original manga storyline.

...of course, the fact it's still ignoring the main anime and is basically like The Last in that it's aimed squarely at people who've already read the manga and know the ending is still a problem there.
posted by MarkTeo1986 on 24/1/2016 21:54