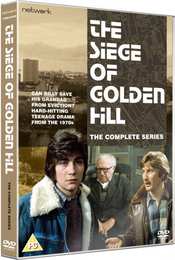 The Siege of Golden Hill - The Complete Series (DVD Details) 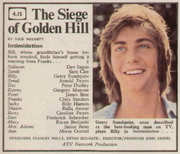 Review for The Siege of Golden Hill - The Complete Series 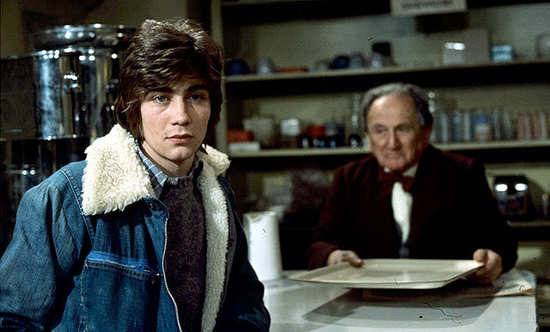 I don’t recall this series airing (in 1975) although I would have definitely been its target demographic, aged 14. I did, however, see the first intriguing episode on one of Network’s wonderful compilation DVD’s from a few years back, ‘Look Back on 70’s Telly – Issue 3’ and was hoping that the whole series might one day be given a release.

Unlike many Children’s drama series of the day, ‘The Siege of Golden Hill’ (created as a 12 part serial for ATV Birmingham in 1975) is incredibly edgy with scarcely a single ‘posh person’ to be seen, despite its considerable cast of teenagers and adults. The programme would never make on air today as a kid’s show; it’s far too violent, harsh, scary and political for that. 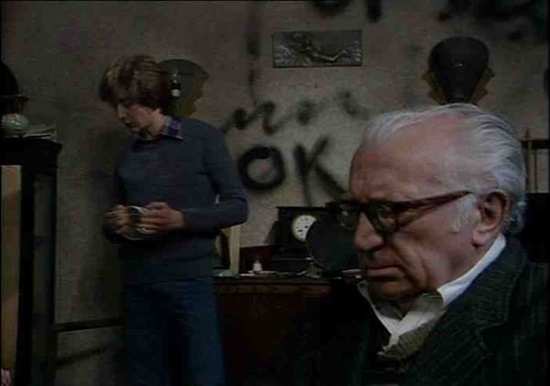 Remarkably apposite today, given the recent shenanigans in Hoxton where posh breakfast shops have been attacked as symbol of unwanted and heartless gentrification, ‘Siege’ is based in inner-city Birmingham where old houses are being destroyed to make way for the new, despite the lack of opportunity for the council house kids in the area who remain condemned to dead-end factory jobs, crime or unemployment. 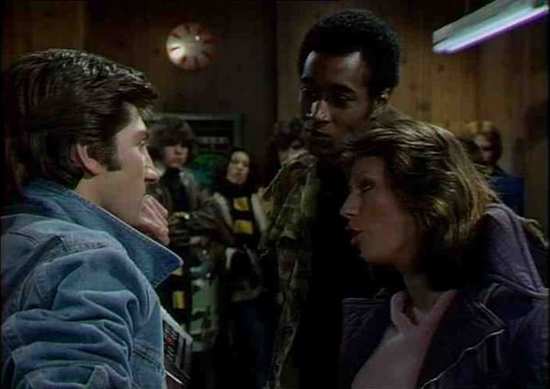 It also deals with heavy issues for kids to get their head around, like corruption and protection rackets, as well as mindless vandalism and extortion. 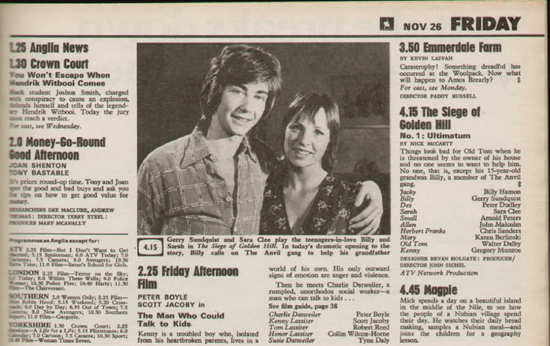 A teenage gang (‘The Anvils’) are running riot when Billy, a member of the gang, learns that his dear old granddad is being threatened over his refusal to leave the home he was born in (and fought in two world wars to defend). When it transpires that some of the heat is being delivered by member of his own gang who are now on the payroll of local mobsters, he decides to pretty much go it alone. When it’s clear that the authorities won’t help he’s left with no option but to take it all on himself, with the help of the daughter of a local councillor, Sarah. 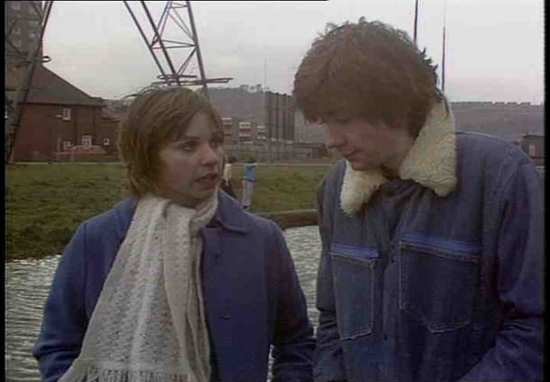 I would have guessed that the siege (which does happen eventually in a rather predictable way) would have dominated the narrative and it does until about half-way through when a whole variety of new issues arise. Friendship and loyalty is tested to breaking point; issues of racism are touched upon; corruption and politics become central issues – as does ‘growing up’ to make a positive contribution to society. Despite all this, it succeeds in never becoming overly righteous , setting a template that other teen dramas would follow (Grange Hill for example). 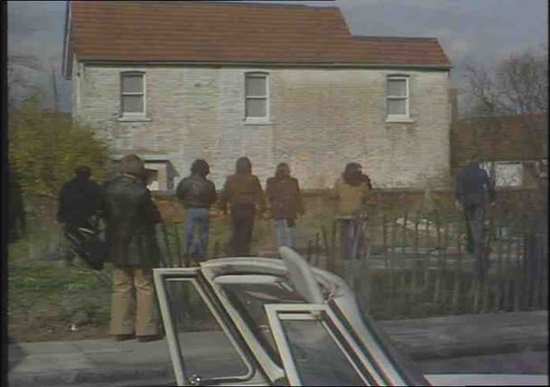 It’s thoroughly enjoyable, despite its vintage (or actually because of it in no small part) and the 12 episodes rattle along. Picture quality ranges from ‘dubious’ to ‘acceptable’ by today’s standards but this won’t detract from your enjoyment if you grew up watching this stuff. 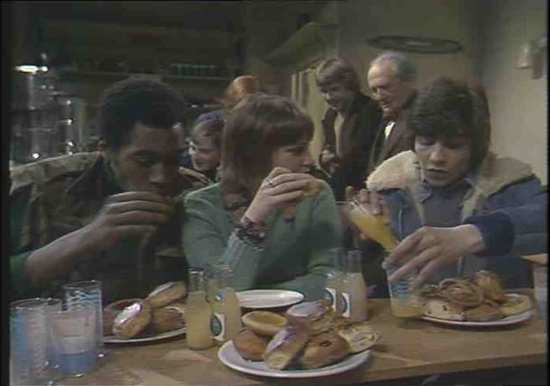 Extras are a bit thin on the ground, constrained to the single surviving episode of the sequel series which aired a year later although this is in pretty poor shape. Nice to have it, nonetheless. What would have been particularly fun would have been some of the cast members reflecting back on their experiences. Indeed, when it comes to kids shows, I can’t resist seeing ‘where they are now’. 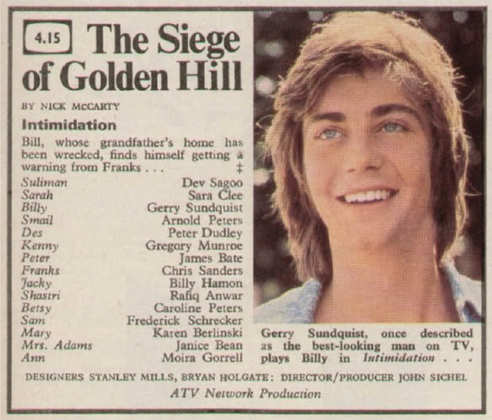 To save you the trouble, here are the results of my extensive (one click on Google) efforts relating to this series.

Billy was played by teen heart-throb actor, Gerry Sundquist (who tragically committed suicide aged 37) who plays the part brilliantly. His on screen presence is incredible and, unusually for one so young (although he was actually 20 at the time of filming) he does it with great subtlety too, rarely over-playing it and leaving room to really crank up the emotion in later episodes. Gerry went on to appear in many roles on TV although clearly had issues in his personal life. 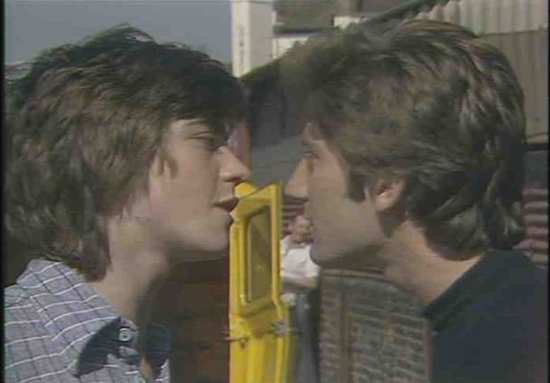 Billy Hamon does a good, if slightly over-played job as the ‘leader of the gang’, laying on the midlands accent so thickly that you would be forgiven for thinking he really was a native. Oddly, Hamon was already 27 at the time of filming. Hamon went on to a varied writing and acting career as well as recording a number of unsuccessful singles. He’s pretty much gone off-radar since the early 1990’s as far as a cursory Google search goes. 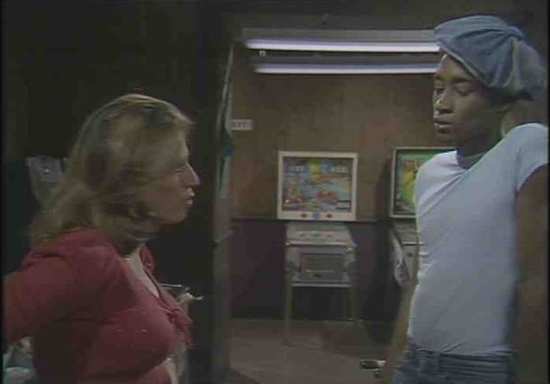 Sara Clee makes an excellent Sarah, having a difficult role as she has to fit in equally well in two worlds; the very middle-class world of her dad’s aspirations and with Billy and his friends too. Having continued with her acting until the early 90’s, Clee now works as a Psychodynamic Counsellor with a focus on helping artists and actors. 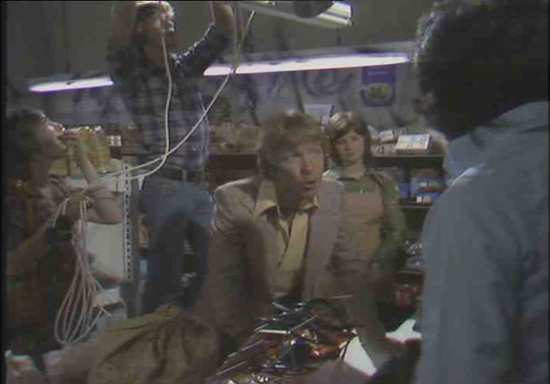 Karen Berlinski plays the icy Mary who at first seems merely harsh but who we later discover harbours real ambition to move beyond the stultifying and pointless lives of her ‘lazy’ unemployed parents. Berlinski (now ‘Hadden’) has reflected some of this ambition in her own life by becoming a successful entrepreneur and author, following a stint as part of a pop-duo with her sister in the late 70’s. She is perfectly cast in ‘Siege’ and it would be good to check out her other limited work. 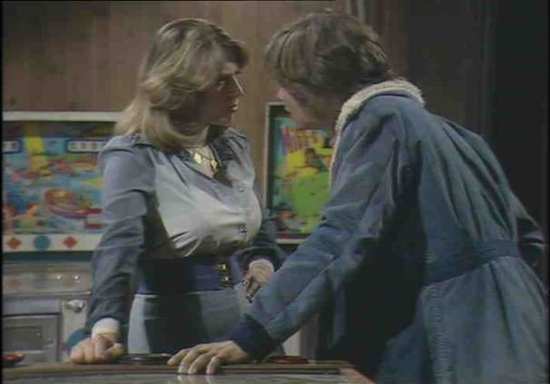 Overall, ‘The Siege at Golden Hill’ is a really first class teen drama and a provides a wonderful dose of nostalgia, even if, like me, you didn’t watch it first time around. It’s fantastic that Network take the time, effort and expense to put these gems out there and it’s the very least we Retro TV fans can do to support the cause by buying a copy. You’ll be really pleased you did. 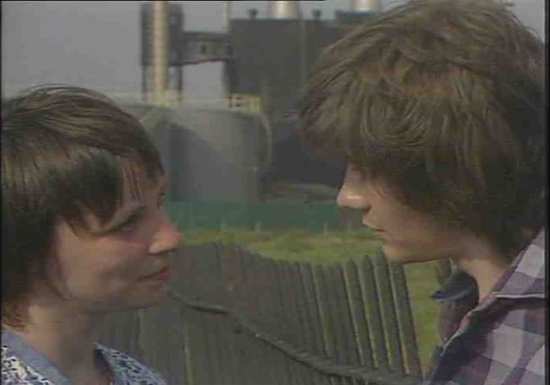 Here’s an episode list for the sake of completion.

I remember watching this when it was screened. It was unusual in subject matter, but that is mostly why I wanted to watch ( that and Gerry Sundquist). It wasn't comfortable viewing at times, but did make you think about topics you might not have come across. Both Gerry Sundquist and Billy Hamon gave fine performances in this and, of course, Billy Hamon also gave a brilliant performance as Christopher Craig in the BBC film To Encourage The Others, about the Derek Bentley case.

Have not seen this since its original broadcast, but think it should be shown again. Programmes did not treat kids like idiots then, they knew we could cope with realities behind the story. We could too.
posted by Kel on 2/8/2021 15:27