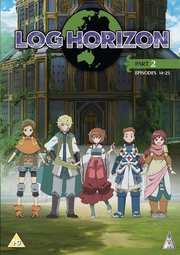 When I started the review of Part 1 of Log Horizon, I mentioned that these RPG anime adventures weren’t my bag, citing Sword Art Online and .hack as examples of shows that rubbed me the wrong way. It’s the whole meta-fiction aspect of them. So consider my surprise when I actually wound up enjoying Log Horizon. It took its time getting there, over six episodes; it’s definitely a slow burner. But the story it tells is interesting, it’s more world building than it is fantasy adventure, and the meta-fiction aspects of this particular series are developed in an engaging and relatable way, made all the more apparent in the first episode of Part 2 of Log Horizon, with the introduction of the World Fraction spell concept. 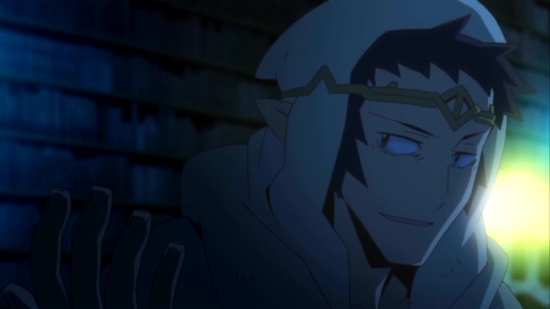 Elder Tales was a popular RPG, one that had grown and prospered online, attracting hundreds of thousands of fans and gamers worldwide. One of them is an Enchanter named Shiroe, who has levelled up to the max, but has done so by eschewing the usual guild system, and going it relatively alone, opting for loose and brief alliances rather than being tied down to a guild. Then one day, the newest expansion pack is added, the Novasphere Pioneers update, and suddenly Apocalypse occurs. Now all of the gamers that were online are ‘trapped’ in the game. They can’t log out, and dying simply resurrects them. Now they are full time residents in a fantasy, alternate Japan, still in the game, but now no longer playing, but actually living their lives according the gameplay rules. But as time passes, this online community starts developing in unexpected and unsavoury ways, certainly not the Elder Tales gameworld that Shiroe and his friends initially wanted to escape into. If he wants to make a positive change in this world, Shiroe might have to do the unthinkable, start a guild of his own... 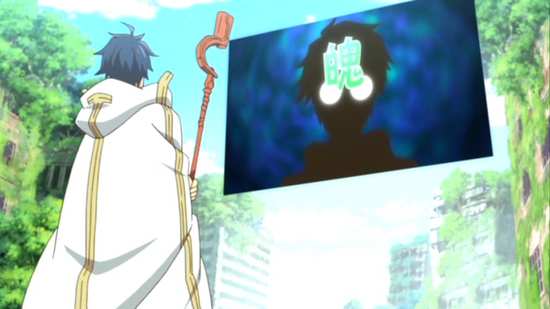 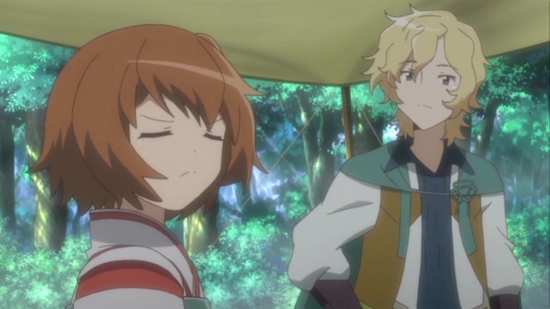 Log Horizon comes to the UK from MVM after going through the localisation mill of Sentai for the dub and subs, and Madman Entertainment for the Region 2 PAL transfer. It’s the usual 1.78:1 anamorphic treatment, clear and sharp throughout, with well defined characters and adequate animation, perking up for the action sequences, but doing little more than the minimum for the character interactions. The colour palette is somewhat subdued, although not for the game interface design. The fantasy world design is both effective and unimaginative, if that is at all possible. The world of Elder Tales is presented as a mirror of the ‘real world’ albeit one reclaimed by nature. No traffic in the streets, buildings covered in vines, cities co-existing with jungles. As a post-apocalyptic world it’s striking and effective a look, but it didn’t take a lot in the way of imagination from the animators and world designers to come up with. The show scales-up adequately to an HD panel, but if you’re watching it on an HD set, you might as well go for the Blu-ray release. 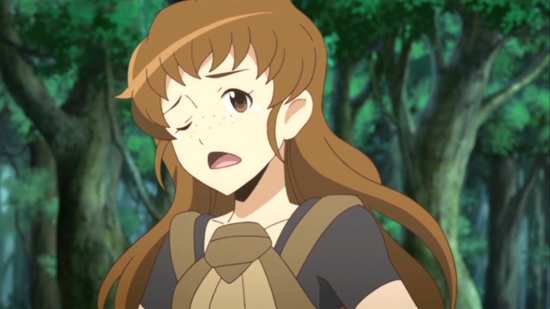 You have the choice between DD 2.0 English and Japanese, with optional translated subtitles and a songs and signs track, and given the plethora of stat displays for the Elder Tales interface, you might be pressing pause quite often in the show to take in what people’s special skills and level attainments are. I was happy with the original language track, stereotypical characters notwithstanding, and everything came through with clarity and the right degree of presence. Speaking of stereotypical characters, they’ve combined the effeminate male with the cat-person stereotype for a new level of annoying, not just the voice, but the subtitles too, delivering cat-puns ad-nauseam (or should that be ad nyauseam?). I gave the dub a quick try, and unlike the usual Sentai efforts, I wasn’t immediately driven to pressing the off button. However the English dub did sound a little hollow to my ears. 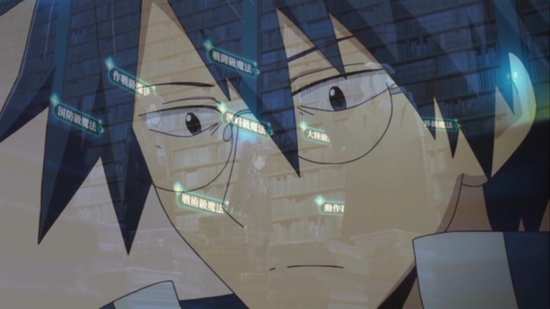 The discs present their content with static menus. The sole extras are on disc 2, and comprise the textless credits sequences. Each episode ends with a translated white text on black, credit reel. 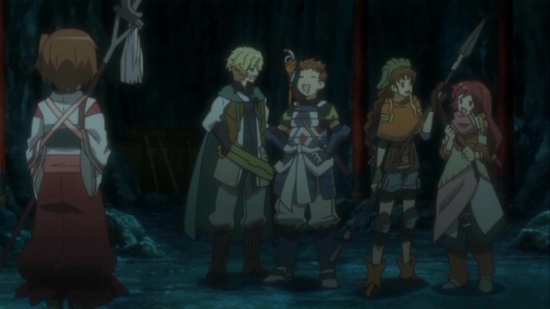 Eventually I wind up eating my words. I’ll decry a certain genre, loudly proclaim that I’ll never watch it in a million years, point out all its flaws to anyone who’ll hear, and then one day I’ll find an example of that genre that I do like, and slowly the wall of my revulsion begin to crumble. It’s happened with Horror, it’s happened with giant robots, and now it looks like the online RPG anime trope is battering down my defences too. I like Log Horizon. There, I said it. An anime show about characters trapped in an online RPG has entertained me, and more than that, I’m now actively anticipating the second series. 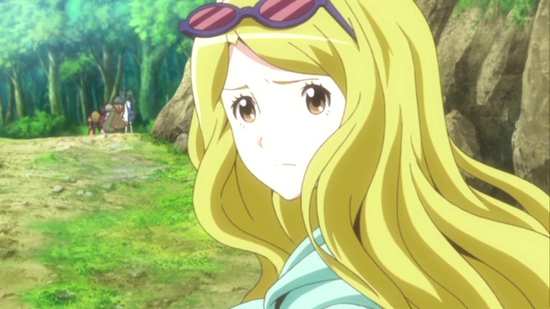 Where Log Horizon differs from its rivals, and what I appreciate most about it, is that it takes the long view with its story, and to me it seems to consider the ramifications of the fantasy world the players inhabit with more thought and depth than something like Sword Art Online. I also like that it doesn’t batter you over the head with its ‘trapped in an online world’ setting. We don’t get constant reminders of the real world, and not everything revolves around getting back, but the mystery of the Elder Tales world isn’t discounted either. Every few episodes we get tantalising hints of what lay behind the Apocalypse, but it’s naturally done, as part of the narrative. Each mention of the real world, the puzzle of why they are in the game just serves to enrich and tantalise. It never feels gimmicky. 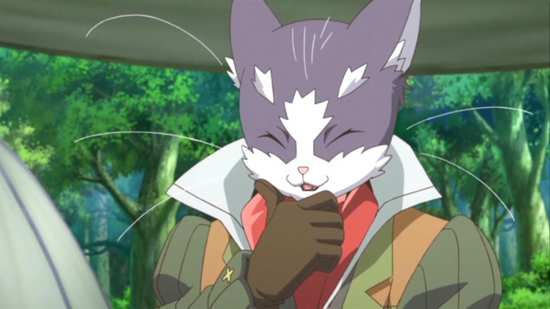 There are two distinct arcs in this second half of Log Horizon Part 2, both of them concerning war. The first arc concerns the war with the Goblins. In the game, there were originally set events that would allow players to level up with rapidity, one of them the coming of the Goblin King which would spawn Goblin attacks. In the confusion of the Apocalypse, the players forgot about this, and it’s during the negotiations with the NPCs, the People of the Land that the Goblin King event re-occurs, and the Goblins march to war. Their first targets are the towns of the People of the Land, and what were economic negotiations becomes something more imperative, although hamstrung by the People of the Land’s pride, and the Adventurers still seeing them, despite their complexity and intelligence, as NPCs. It takes Princess Lenessia of the People of the Land travelling to Akihabara to get the Adventurers involved. 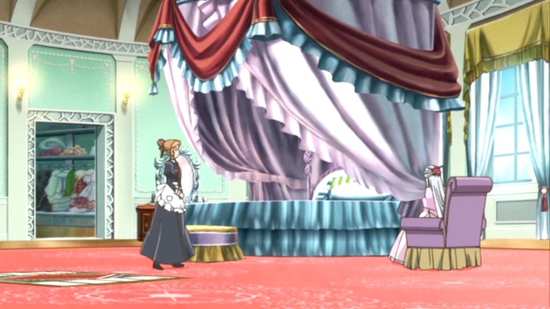 This arc has two distinct tangents to it, besides the obvious battles. The first is establishing Minori and Tohya’s group as competent adventurers. They were the young, low level players rescued by Shiroe at the start of the series, and at the end of Part 1, they were sent on a training camp to get their RPG skills up to scratch. The Goblin invasion interrupts that and gives them a baptism of fire. The second thing is to re-emphasise the reality of the People of the Land, who are no longer NPCs in the traditional sense of the word. We already had that with the flirting that went on between Lenessia and the adventurer Krusty, but now we have the war situation, we get to empathise with an NPC character on the same level as an adventurer, although the show does this through a useful sleight of hand. 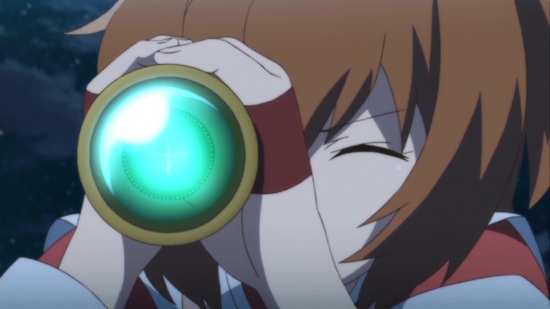 The second arc is more benign, an economic war during Akihabara’s first big festival. Everyone’s having fun, putting on entertainment and showing off to their new friends from Eastal, the People of the Land, when tiny little things start to go wrong, petty confrontations over trifling things, little moments of sourness in an otherwise fun festival. Minori really comes into her own here, as she’s the first to realise that someone is manipulating events, and it turns out that a delegation from the West is looking to disrupt the negotiations and treaty between Akihabara and Eastal. It’s a more comic form of economic warfare that contrasts the seriousness of the first arc. The show concludes with the reveal of a new character named Nureha, a player from the West who knows Shiroe personally, and has plans for him that doesn’t bode well for Akihabara. There are also a couple of tantalising reveals, of big changes to the Elder Tales World, and a potential way back to the real world, which would have been annoying if these 25 episodes of Log Horizon were all there were. Fortunately we have another 25 episode series to anticipate, which will hopefully expand the story more. 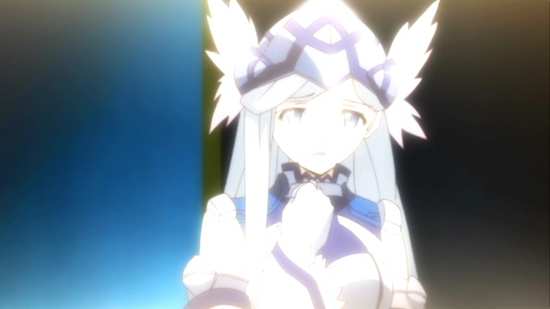 What I liked most about the first half of Log Horizon is still evident here. It’s the world building aspects to the show, the thoughtful exploration of how this world works, and the how way the characters interact with the world gradually develops that really engages with me. The weakest aspect of the show is still the characterisations, which adhere to the usual anime stereotypes almost religiously, and you get the feeling that certain character interactions could come straight out of a ‘how to make anime’ manual. Still sometimes the stereotypes can be appreciated, and after half a season of restraint, I actually welcomed Akatsuki kicking Naotsugu in the face again, before asking permission to do so from Shiroe. 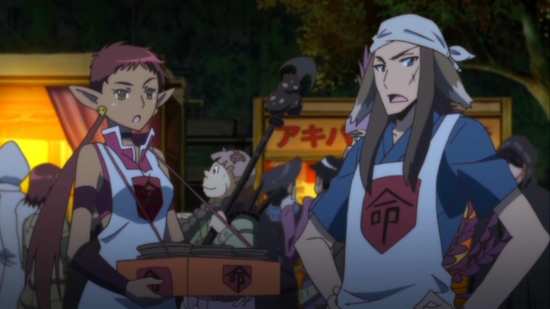 This second part delivers on the promise of Part 1 of Log Horizon, building on the story and developing the characters in a very appealing way. There are two satisfying arcs in this release, but it also whets your appetite for more. Hopefully MVM won’t be too long in licensing Season 2.