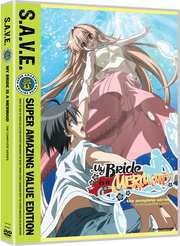 Review for My Bride is a Mermaid Complete Series - S.A.V.E. Edition

I’m really fickle when it comes to buying anime. You have to be with a medium that rarely gets TV exposure, and while online streaming has remedied that, there’s no way humanly possible to watch everything that is streamed in a season to find out what’s good and what’s not. So it comes down to research, reading about the show online to find out what it’s about, reading a review or two, reading fan opinion on a forum here and there, and then scanning the interwebs to see what the DVD and Blu-ray quality is like, what glitches to look out for, and if importing, see what version is compatible in the UK. That’s before the bargain hunt that ensues, looking for the most reasonable price. That’s hours of thought and perusal right there. And then sometimes I just see the name of a show and just click the order button, sight unseen. After all, who’d want to miss out on a show called, My Bride is a Mermaid? 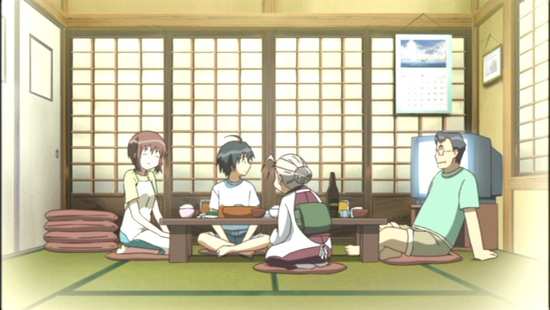 Of course it doesn’t hurt that this is the Funimation S.A.V.E. edition of the show, the bargain bucket re-release after the full price releases have sold through, and it’s time to recoup the last few cents and dollars possible from a licence, from those random shoppers who won’t put down $60 for a show, but will happily spend $15. 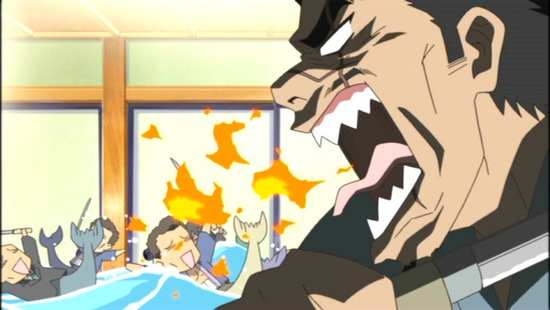 It wouldn’t be such a problem if she was just a mermaid, but Nagasumi Nichishio got more than he bargained for when he went to the coast on vacation with his family. He went swimming, got into trouble, and almost drowned. He wound up being rescued by Sun Seto, an actual mermaid, but being rescued by this particular mermaid is potentially more lethal than drowning. Sun Seto is daughter of merman Gouzaburou Seto, head of the undersea Yakuza, and the penalty for being witness to a mermaid in her natural form is death. It’s a harsh punishment, but Sun has the obvious solution, marriage. You wouldn’t kill one of the family after all. But if Gouzaburou has his way, no petty human is going to marry the apple of his eye. When vacation ends and Nagasumi returns home to the city, Sun goes with him, as do a whole heap of her bodyguards. 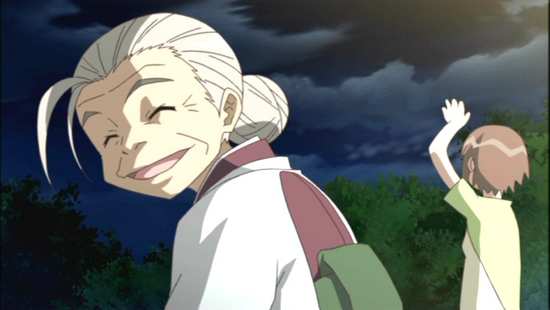 My Bride is a Mermaid is presented across four discs thus. Note that they are coded Regions 1, 2 and 4 if you haven’t yet got a multi-region DVD player. 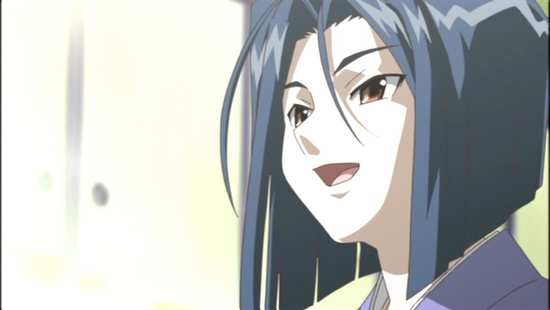 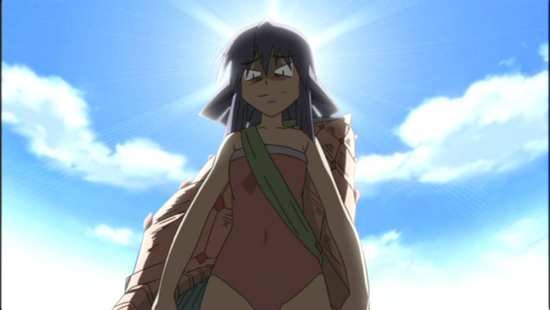 My Bride is a Mermaid gets a 1.78:1 anamorphic NTSC transfer across these discs. Don’t expect an HD presentation for a simple animation like this; it’s best suited to the DVD format. The image is clear and sharp throughout, colours are consistent, and there’s no visible problem with aliasing, noise, or compression. It all looks as fine as you would want. My Bride is a Mermaid is a simple, unchallenging animation, with basic character designs, not a lot of movement for the dialogue scenes, and over emphatic animation for the action and comedy. It’s full of bright and primary colours, with characters turning SD or parodying themselves at the drop of a hat. Quite frankly, it looks like a show from the eighties given a 21st Century CGI polish and consistency. 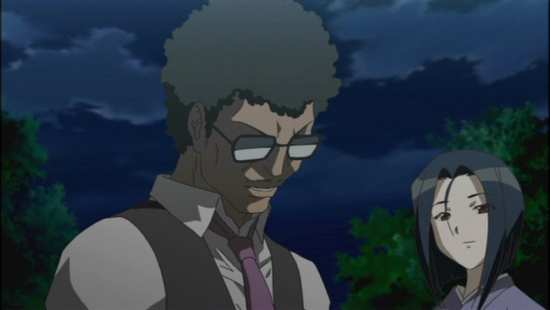 You have the choice between DD 5.1 English and DD 2.0 Japanese, with optional translated subtitles and a signs only track. I went with the original language, and found audio that was clear throughout, the dialogue audible, the music well presented, and the subtitles accurately timed and free of error, if prone to the occasional screen overload when there’s text to translate as well. The actor performances were as you would expect for a middle of the road comedy, nothing spectacular. I gave the dub a quick spin, and found a typical Funimation comedy dub, replacing the funny with loud. 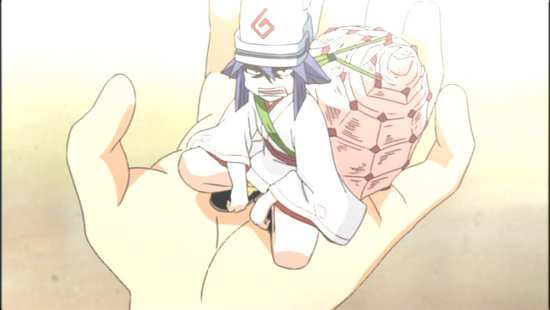 My Bride is a Mermaid is presented in an Amaray style case, with four discs held two on each side of two central hinged panels. The S.A.V.E. green stripe is there, but the first thing I did was take advantage of the reversible sleeve, with the clean artwork. The discs present their contents with static menus and jacket pictures.

Disc 1 autoplays with a trailer for Rin, Daughters of Mnemosyne.

Disc 2 kicks off with a trailer for Casshern Sins. 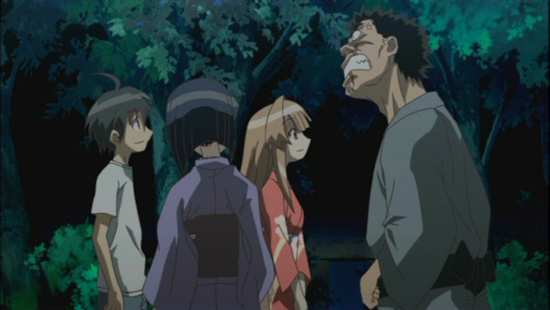 Disc 3 is front-loaded with the trailer for Corpse Princess: Shikabane Hime.

Disc 4 begins with a trailer for Oh! Edo Rocket, while from the menu you can access the second lot of textless credits, and more trailers for Vampire Girl vs. Frankenstein Girl, Sengoku Basara: Samurai Kings, Full Metal Panic? Fumoffu, Dragon Ball Z Kai, Linebarrels of Iron, Ghost Hunt, Eden of the East, and Hetalia.

We’re missing out on the two OVA episodes however. 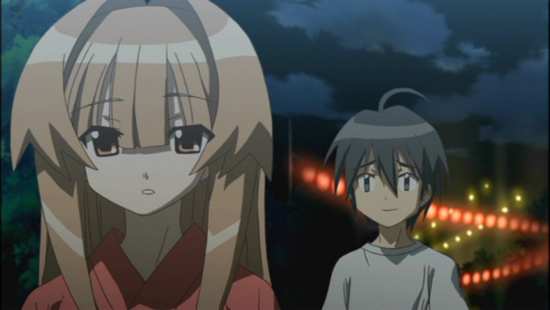 That’ll teach me to judge an anime by the title! My Bride is a Mermaid is average, depressingly so. It’s another in the long line of romantic comedy anime that follows the same path of having an ineffectual male lead falling for an other-worldly female, and a whole heap of oddball characters showing up in his everyday life thereafter, making it a nightmare. It’s the sort of thing that’s been done to death since, Lum first fell for the dubious charms of Ataru Moroboshi back in Urusei Yatsura, and seeing another menagerie of character archetypes, the same kind of gags, another harem of females is just tiring at this point, especially when My Bride is a Mermaid does little to stand out. 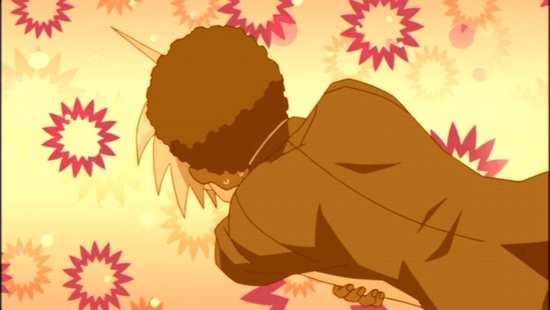 It’s one of those shows which work on running gags through the show, and depending on how funny those gags are, the more you will be able to get out of the show. For me, having seen many of these jokes before in other shows, accomplished to greater effect, the show fell flat more often than not, although I still did find it sporadically funny, about one in five episodes pushing my guffaw button. But that ratio of hit to miss just isn’t good enough for a comedy. I suppose the warning signs were there right from the beginning, with Funimation ‘re-versioning’ the episode titles into recognisable Western movie titles, for added comic value. 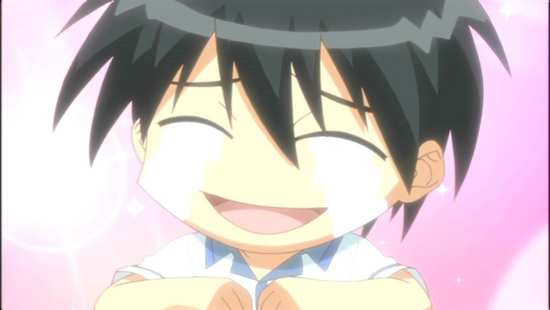 It could have been a much better show. The initial premise certainly had a lot more attraction to it, set at the coast, where Nagasumi winds up rescued from drowning by Sun Seto, a mermaid. She owes a lot to Daryl Hannah’s character in Splash, only displaying her mermaid’s tail when wet, and able to defend herself with a piercing shriek. The twist being that Sun is heir to a mermaid Yakuza family, and their rules on human mermaid interaction are strict. The only way to save Nagasumi’s life is for Sun to marry him into her family, and so the shenanigans commence. It’s no guarantee of safety for Nagasumi, as Sun is the apple of her father’s eye, and he’ll kill Nagasumi out of general principle, while the rest of the clan are not much friendlier. Shark Fujishiro is an obvious hazard, but the cute, diminutive doll-like Maki the Conch has a lethally bad attitude. The gag is that all of Sun’s family and associates look like and talk like the gangsters they are. 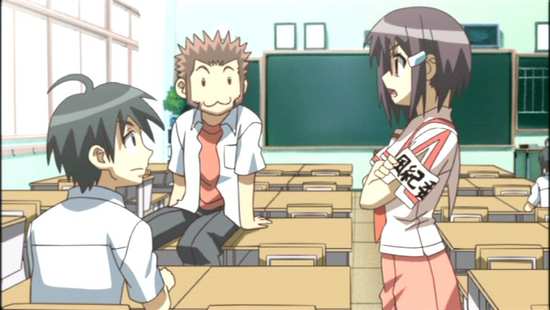 This was interesting if a little clichéd, after all gangsters and their codes of honour are hardly a new thing in anime, but My Bride is a Mermaid opts for absolute mediocrity after the first few episodes by concluding Nagasumi’s holiday, and shifting the whole kit and caboodle to his home in Saitama, where Sun joins him as his ‘bride’ and pretty soon the rest of the Seto gang follows, with Maki as Sun’s retainer, and the rest of her family fitting in undercover at Nagasumi’s school as new members of the faculty. Once in a while we’re reminded of Sun’s mermaid origins when she accidentally gets wet, or Fujishiro puts on his shark face to eat Nagasumi, but eventually whole episodes can pass where that initial premise is forgotten altogether. It’s just gangsters and hapless teen male lead. 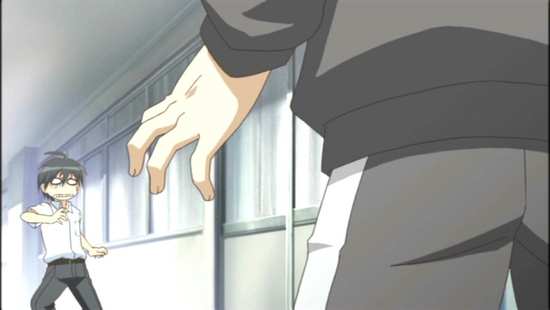 Of course there are more reasons for Nagasumi to remain in a constant state of panic as more oddball students transfer in. He’s been a fan of the teen pop idol Lunar for years, and it should be exciting when she moves in to the school, but it turns out that she’s a mermaid too, Sun’s childhood rival and friend, and she decides to steal Nagasumi and make him her servant. She moves into his house too, where she’s constantly inflicting abuse on the poor guy. Lunar’s dad turns out to be a Terminator clone who also wants to kill Nagasumi for getting close to his daughter. Another rival in the form of Kai Mikawa shows up, claiming to be Sun’s fiancé. He’s heir to an industrial fortune, travels everywhere in a submarine, and is so scared of the outside that he lives in a spacesuit. Then eventually Akeno Shiranui arrives, an enforcer from the mermaid world making sure no one is letting slip the mermaid secrets. 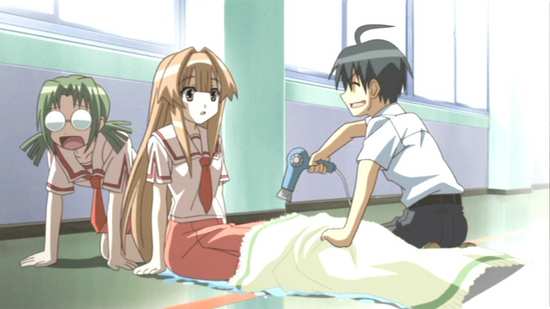 Wackiness also ensues in the school faculty, with childhood friend Mawari daughter of the local police chief, with ambitions to be just like her father, and her police attitude terrorising the gangster’s daughter Sun. The class rep has a crush on Nagasumi, but living behind a pair of thick glasses, no one knows she lives, or even knows her name, while Nagasumi’s simian friend Chimp, a.k.a. Saru, is a pervert who crushes on Sun, but as soon as Kai shows up, opts to become his ninja-esque right-hand-man, sensing where the money’s at. 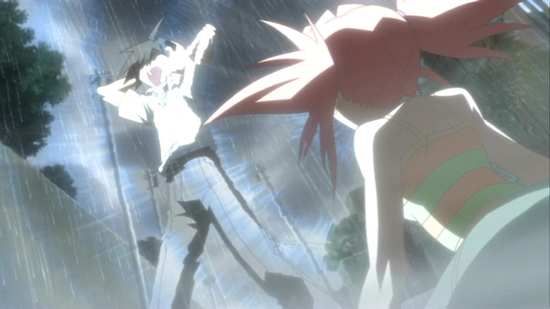 It’s the running gags and repeated punchlines that make this show so tedious for me. I lost count of the number of times the cherry blossoms would start to fall, the enka music kick in, and Sun Seto make a passionate speech about mermaid honour to justify her actions. Once in a while the show would hit the mark, and I have to admit that Lunar’s dad riffing on Arnold Schwarzenegger time and again made me laugh out loud, but much of this show could only make me smirk out loud, and that’s just not good enough in a comedy. It’s okay if you want to give your DVD player something to do.