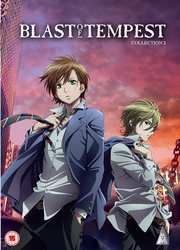 Review for Blast Of Tempest Part 2

I had high hopes for Blast of Tempest when Part 1 showed up last month. After all, it is one of those premium Aniplex titles, and when you combine Shakespeare’s Hamlet and The Tempest with anime, you’d expect good things. And with the literary quotes flying thick and fast in a tale of magic and revenge, it certainly looked as if Blast of Tempest was heading in the right direction. But as it approached its midway point, the end of the previous collection, it suddenly delved into verbose chop-logic, and a twist that buried all its hard character development under what looked like a whole heap of daftness. Twists like that often signal the death knell of a series, but just as often a show can recover from them to deliver a thrilling climax. Now that the conclusion of Blast of Tempest is here, we get to see which way it goes. 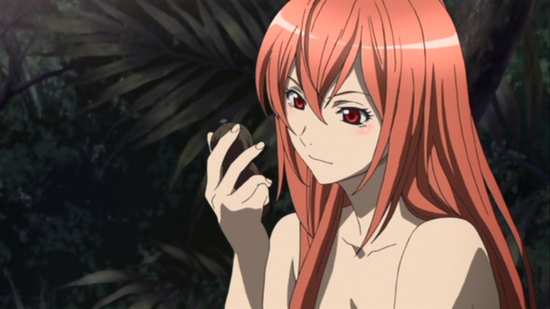 The world of magic is in turmoil. It was the Kusaribe clan’s responsibility, under the leadership of the strongest mage, Hakaze Kusaribe, to protect the Tree of Genesis, the source of their power, but dissent about this duty exploded into rebellion, when Samon Kusaribe deposed Hakaze, kidnapped her, sealed her in a barrel, and left her alone on a desert island where her powers were greatly diminished. It was all that she could do to create a talisman, and place it in a bottle, casting it out into the ocean in the minuscule hope that someone would pick it up. 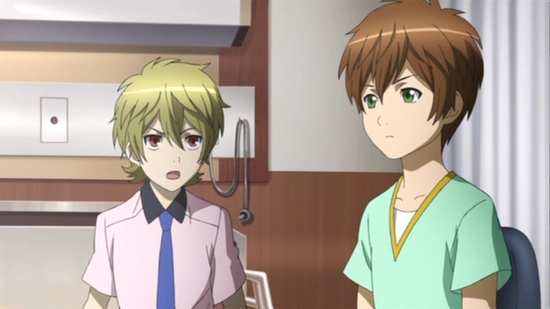 As chance would have it, that talisman came to one Mahiro Fuwa, and Hakaze is able to communicate with him, explain Samon’s dark intent to restore the opposing force to the Tree of Genesis, the Tree of Exodus, which would mean disaster for the world. She also points him to the talismans that will allow him to use magic, to act on her behalf against Samon and the rest of the Kusaribe clan. The thing is that Mahiro cares little for this. All that he needs is Hakaze to keep her promise to him, to find and point him to the murderer of his sister, Aika. Drawn into this is Mahiro’s best and only friend from school, Yoshino Takigawa, who unbeknownst to Mahiro was dating his sister before she died. 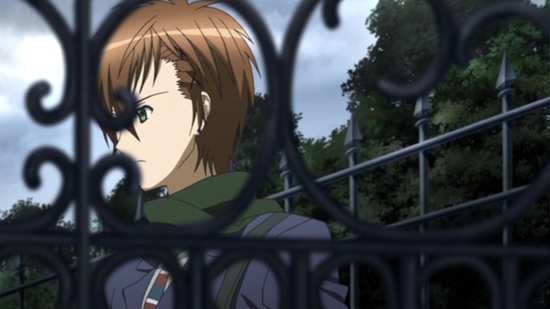 At the end of the previous collection, a confrontation between Mahiro, Yoshino, and Samon at Mount Fuji and the Tree of Exodus seemed about to climax with the miraculous return of Hakaze Kusaribe, when all hell broke loose as the Tree of Genesis partially awoke, causing havoc in the world. We rejoin the story after Mahiro wakes up, having healed from his grievous wounds, to find a substantially different world. A large fraction of the human population has fallen to the Tree of Genesis, although it has been selective about whom it culled, criminals and combatants, armies and threats. 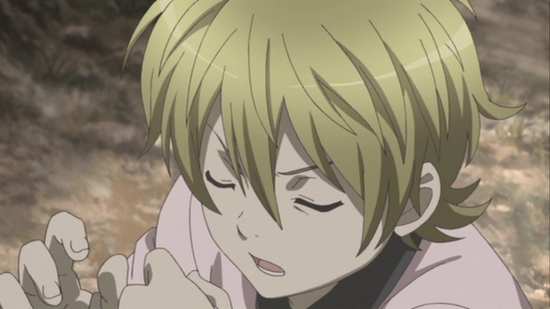 The tree’s very presence in the world has established a new order of peace, and as the polluted world heals, prosperity too under its watchful aegis. There is no more violence, crime or war. This isn’t good news for Mahiro though, as he still has one act of violence in mind, against the murderer of his sister, should he ever be located. It’s in his best interest to defeat the Tree of Genesis, and Hakaze and Yoshino are also coming to that way of thinking. It also turns out that just as Hakaze is the Mage of Genesis, there’s a Mage of Exodus out there too, and he might just be responsible for Aika’s murder. But there are truths yet to be revealed... 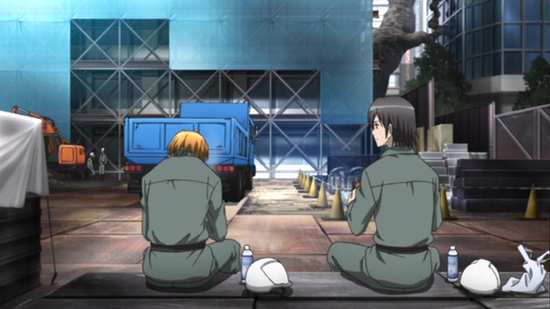 The concluding twelve episodes of Blast of Tempest are presented across two discs from MVM.

Disc 1
13. The Logic of Dreams
14. Happy New Year
15. You Seem to be Plotting Something
16. The Wandering Apparition
17. Marine Snow
18. The Dancing Princess 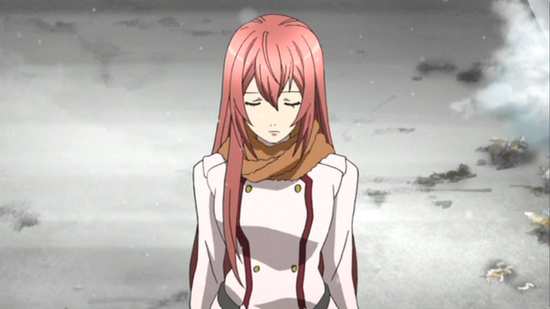 Blast of Tempest gets a 1.78:1 anamorphic transfer on these discs in native PAL format thanks to Australia’s Madman Entertainment, and the image is clear and well defined throughout. There are no visible compression artefacts, aliasing is kept to a minimum, and the animation comes across well. Of course in this day and age, Blu-ray would be better, but Blast of Tempest on DVD is pretty good, it certainly scales up well to a flat panel display, and the show’s excellent production design, consistent character design, and impressive magic and action sequences come across with impact. My only nitpick would be that the font chosen for the subtitles is a tad small, especially on smaller screens. 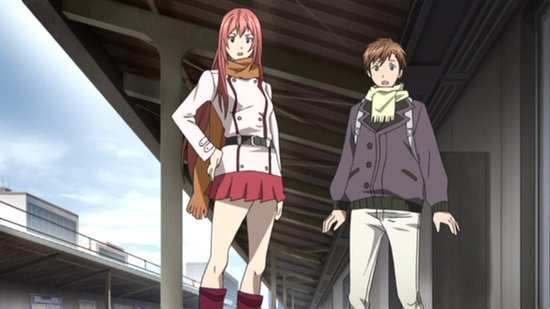 The only choice here is DD 2.0 Japanese Stereo with optional translated English subtitles. The dialogue is mostly clear, but has a tendency to be drowned out by the music during the more intense moments. In a show where you’re supposed to read the dialogue primarily, you might think that’s less of an issue, but I still found it distracting. The actors are well suited to their characters, and other than the issue of balance, the show’s music is quite impressive. The theme tunes too certainly stick in the mind. The show’s action sequences are presented well, and the stereo certainly gives it some surround effect when Prologicked up. The subtitles are accurately timed and free of typographical error. 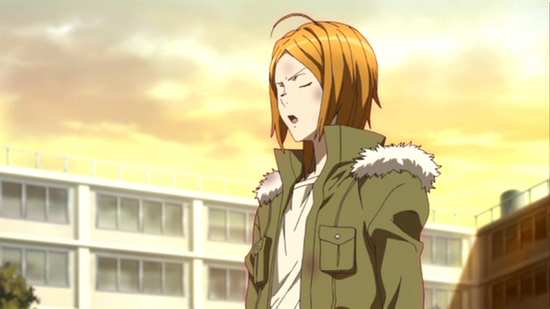 I have to admit that it’s odd that this show didn’t get an English dub, it certainly warrants one, given the Shakespeare quotations that fly thick and fast here. It actually seems daft not to have this show in English. Perhaps Aniplex are going to do what they did with Blue Exorcist, and wait for a Blu-ray release before actually dubbing it. 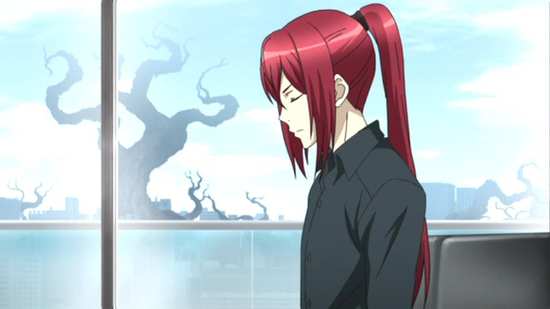 The discs present their contents with static menus and jacket pictures. The only extras are on disc 2, and comprise the textless credit sequences and trailers for Rosario and Vampire, The Garden of Sinners, and Fate/Zero. 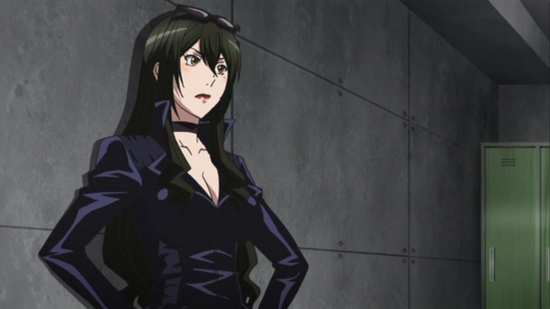 I had to readjust my mindset for this second volume of Blast of Tempest. The first volume started off with a very compelling story of revenge, against a backdrop of magical machinations and a battle for the fate of the world. That was great stuff until the final episodes of that collection, when the battle for the fate of the world came to the forefront, hobbled by some painful choplogic and a dip in the quality of the writing, as well as a ridiculous, over-the-top climax for that magical confrontation. So I went into this collection fully expecting more of that, as well as the choplogic. 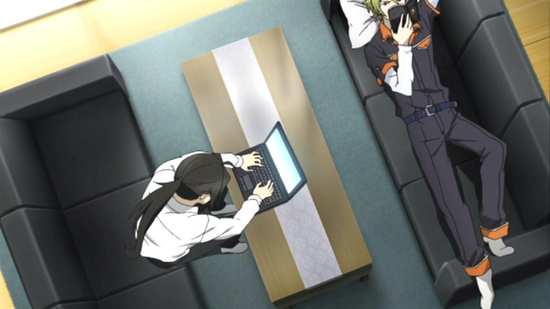 Blast of Tempest wound up wrong-footing me, as it resumed after a substantial time-skip. The end of the previous collection saw our protagonists grievously injured, and the first episode in this collection catches up when Mahiro wakes from his recuperation some time later. It also means that grotesquely absurd magical climax has passed, it’s a fait accompli, and where we rejoin the story, is where we have to discover the shape of the world that has resulted, the implications of that, and the new alliances and enmities that have formed in its shadow. 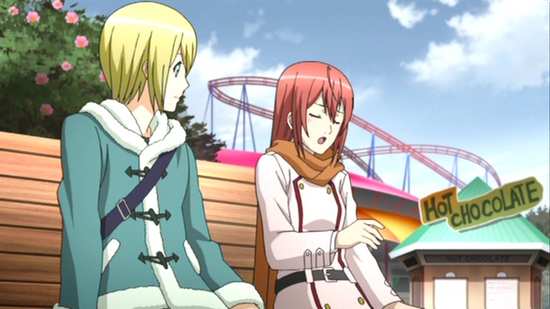 When we resume, Yoshino and Hakaze are travelling, trying to learn what the Tree of Genesis is up to, and what they can do about it. The Kusaribe Clan has joined forces with Hayakawa, and Fraulein Yamamoto, and when he wakes, Mahiro, and are trying to work out what their next move should be. It turns out that the Tree of Genesis, while it seems to have bought peace to the world, isn’t the benevolent overseer that people are taking it for, and that its next step would be devastating for humanity. The way to counter it is still the Tree of Exodus, but it now becomes clear that just as the Tree of Genesis invests its power in Hakaze and the Kusaribe clan, there is a Mage of Exodus abroad who should have the power to defeat the Tree of Genesis, and tracking him down becomes a priority. When Samon applies some more of that choplogic, he comes to believe that Yoshino is in fact the Mage of Exodus, which sows a little tension in the group, especially as the Mage of Exodus is the key suspect in Aika’s murder. 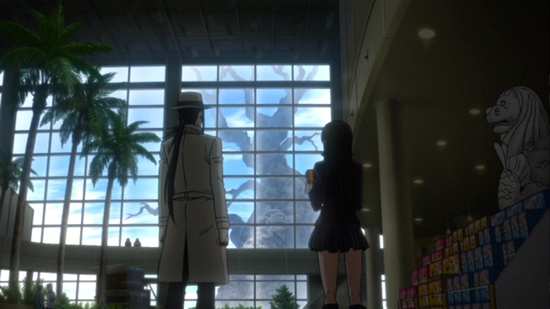 Sure enough, Mahiro’s hunt for vengeance is still a key part of this story, but also taking precedence is Hakaze’s burgeoning feelings for Yoshino. She’s falling in love with him, and given her status as Mage of Genesis, and Yoshino’s dead girlfriend, as well as Hakaze’s established abilities to travel through time, that suggests another suspect for Aika’s murder that hasn’t previously been considered. And so for much of this collection, Hakaze’s in a fret, trying desperately not to fall in love, and constantly being frustrated when Yoshino, unwittingly continues to be so infuriatingly endearing. 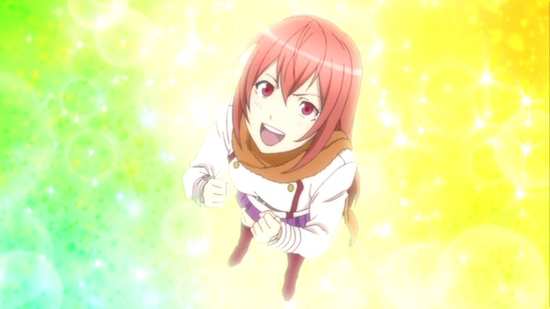 If the first half of Blast of Tempest was the Shakespearean tragedy, then its conclusion very much switches mode to comedy. Mahiro and Yoshino have issues when the truth about Aika’s boyfriend is finally revealed to all, Hakaze is having her romantic problems, Yamamoto keeps on coming up with ever more extreme conspiracy theories of what the Trees of Genesis and Exodus actually are, and then, when the Mage of Exodus is eventually located, he turns out to be an absolute milquetoast named Hanemura, who is more concerned with dealing with being dumped by his girlfriend than any plans of global domination. In fact he winds up being the one dominated, especially by Mahiro and the others, who want to use his powers to save the day, but have to put him through an intense training regime first. 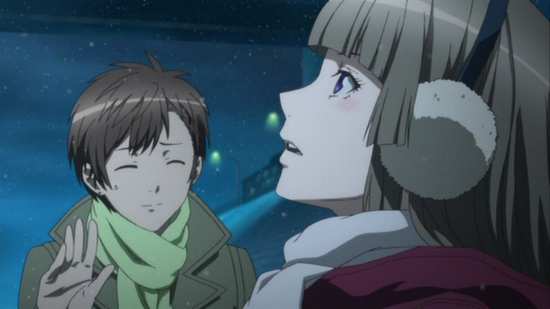 That turned out to be a blip in the middle. That somewhat daft maguffin that drives the story, the whole Tree of Genesis and Exodus silliness only really takes centre stage at the midpoint and at the end of the story; it’s not really the point of Blast of Tempest. Also, that painful half episode of choplogic is also a blip in the overall quality of things. There are moments still that have characters standing around, theorising at each other, but fortunately it’s confined to short scenes, not significant fractions of episodes. What Blast of Tempest does is maintain focus on the characters and they way that they relate to each other, the central themes of loss, revenge, grief, and also love and friendship are never forgotten or sidelined. And with this half’s shift towards comedy, the show also offers more in the way of entertainment, if fewer thrills. But most importantly, it answers the important questions in the story, so you won’t be disappointed or left hanging by the time the show ends. Blast of Tempest turned out to be one of the better shows released this year.