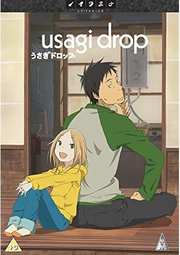 Blu-ray
Kids On The Slope Collection 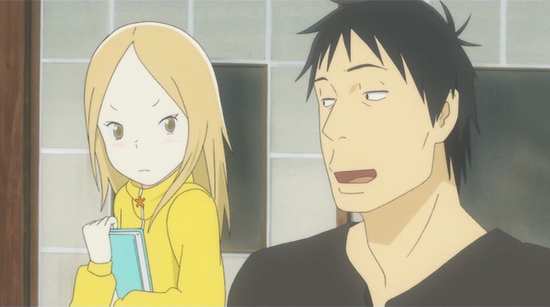 ‘Usagi Drop’ is unlike any anime I’ve ever watched. True - it uses plenty of well-worn anime conventions, like all the detail and nuance dropping out of the image when someone is angry for example, or one of the main protagonists (in this case a little girl) having startlingly wide-eyes. But it’s the narrative that is so unusual, as well as the artful way that it is carried through. It just doesn't play out like most anime, none of the characters or situations vary very much from real-life, and it moves at a gentle place, entirely in keeping with its subject. In fact, the first few episodes were so emotionally charged that I daren’t watch more than one at a time as I waited for what I thought would be some unbearable plot-twist or disaster. But it never came. And that was the point. Usagi Drop is a sensitive, warm-hearted and almost philosophical reflection of the cycle of life. And I haven’t even told you what it’s about yet. 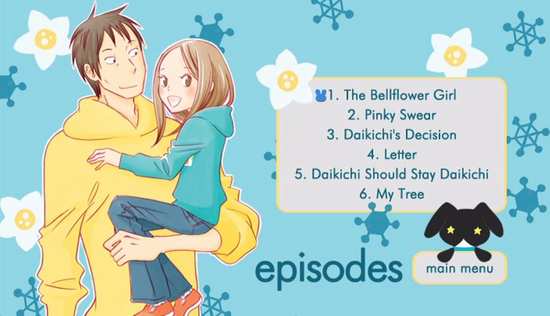 Being the procrastinator I am, you’ll have to bear with me for a few moments more before I get to that. Firstly I wanted to re-direct the serious anime-lover to this review of the set, posted a couple of years back, by the animemeister himself, Jitendar Canth. Now, I know some of you might think of Jitendar as a hardened, mecha-robot loving, sword-wielding, dragon-slaying tough guy. But some of us know better. In reality he’s a generous, warm-hearted, big old softy who just happens to possess an encyclopaedic knowledge of all things anime. He’s also one of the finest reviewers out there. I just wanted to point out before I move on that Jitendar gave this series 10 out of 10 – something he reserves for the best of the best; an exalted position indeed. 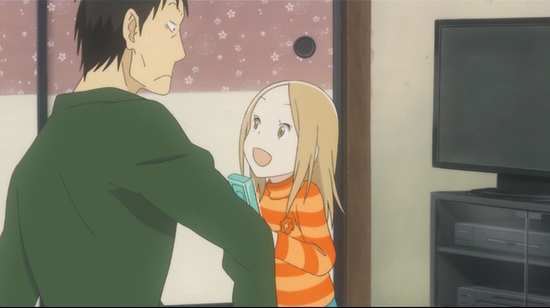 Comprising just 11 episodes (and a few bonus shorts), and in native Japanese audio only (with subtitles), it originally aired back in 2011 in Japan at weird time-slots, like 1.00 am or just after lunch on a weekday. I’m guessing it’s aimed at 25-35 year old would-be parents as it tells the tale of a single-man’s adoption of a 6 year old girl, and the changes this brings to his life – some bad but mostly good. 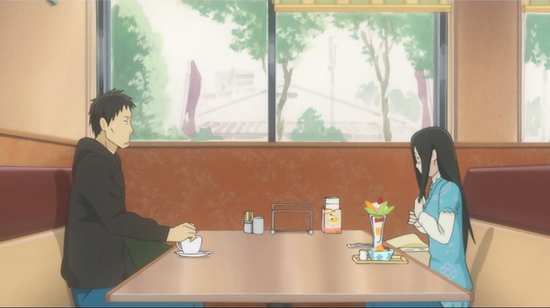 Daikichi, a 30-year-old singleton, attends his grandfather’s funeral only to discover that his grandpa had a small daughter, Rin who is just 6 years old, who he has been raising on his own. It’s unclear who the mother is or was and all the family seem uninterested in caring for her. Which is when Daikichi surprises everyone, including himself, when he volunteers for the job. 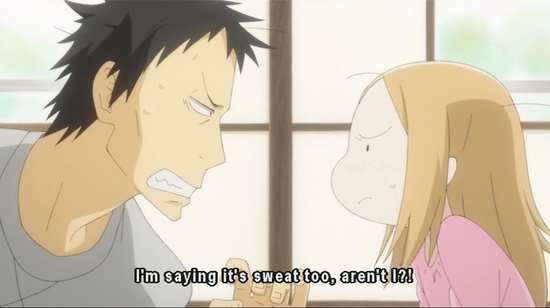 What follows is a delightful exploration of what it means to be a parent, the sacrifices and lessons that need to be learned along the way, as well as the growing bond between ‘father’ and ‘daughter’. 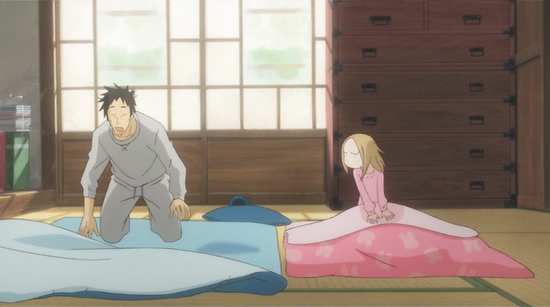 The fact that Rin is utterly delightful helps of course, although she is in no way perfect. For a start there’s those so-called ‘sweat’ stains that she leaves in the bed most nights – which itself is explained in a later episode, when Daikichi meets the mother, who tells of how she used to leave the girl all alone in their flat at night whilst she went out, causing the bed-wetting problem that Daikichi helps solve. 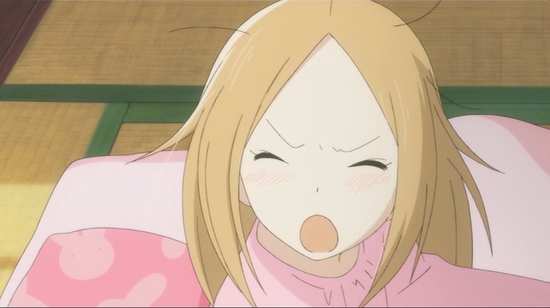 No one is perfect in ‘Bunny Drop’ (as it’s known in the US) – this is no Disney whitewash. But the joyous imperfection of it all is in some ways what it’s all about. 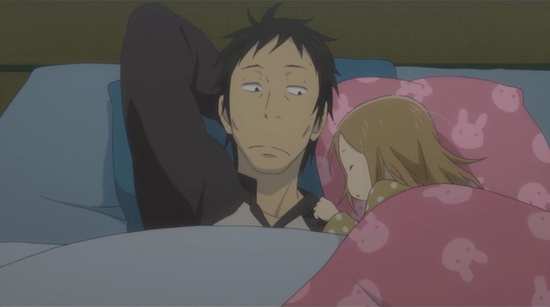 We see Rin growing up and teaching Daikichi as much as he is able to teach her, and this involves a whole series of moving episodes. We see Rin start school, come to terms with her Grandfather’s death and her new circumstance, making new friends (including Daikichi’s mum), getting flu, losing her teeth, getting lost and so much more. 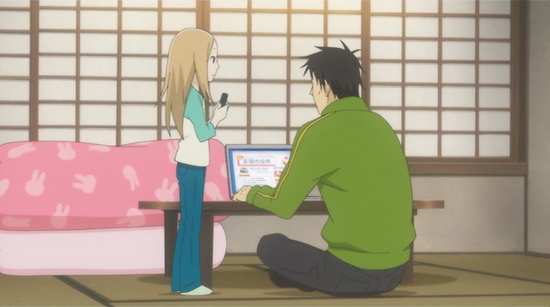 For Daikichi’s part, he learns what it is to sacrifice his own free-time for Rin’s and the joy it brings, as well as questioning his work ambitions and what truly counts in life. 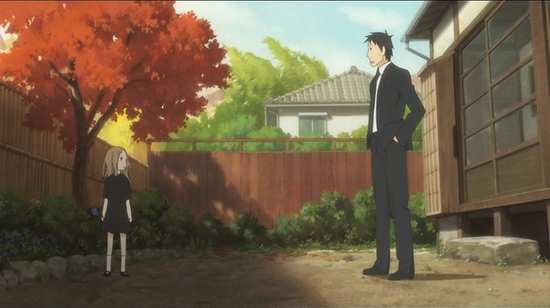 It’s a great series, and one which would have passed me by had Jitendar not sent me the discs. It’s just so well-rendered with subtle emotions very cleverly communicated (perhaps by the slight reddening of a cheek or very subtle eye movement) and well scripted too. 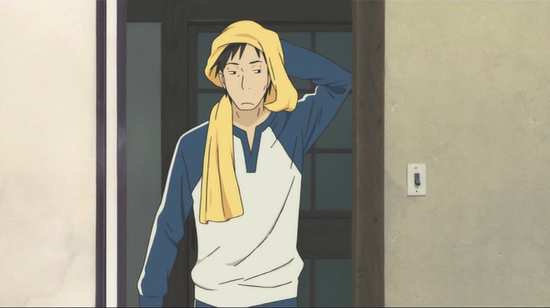 I held off giving it ten out of ten really only because that would have suggested that it was as good as ‘Kids on the Slope’ which for me was just about perfect.

The 1.78:1 anamorphic picture was fine – often very muted with a soft palette in keeping with its warm vibe. 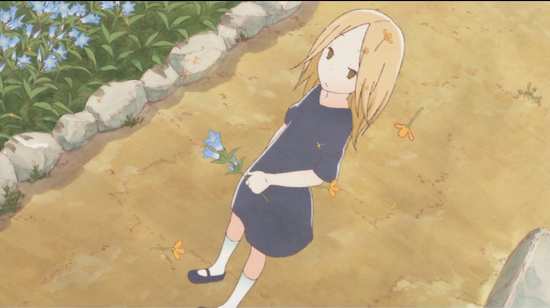 Audio was excellent with really great voice acting throughout. Maybe it was a good thing that there was no option to watch with English audio – a slightly lazy option which I normally take, being slightly lazy myself.
The opening music reminded me of a light-weight version of The Clash’s ‘I Fought the Law’ (a cover in its own right of course) though with just 11 episodes it stayed just about bearable. 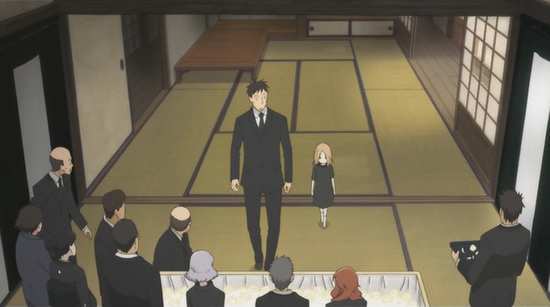 I nearly missed the extra features which I only spotted whilst taking screen grabs on my PC but I wished I’d seen them sooner. Four ‘bonus episodes’, all running for about 5 minutes apiece, were included along with instructions as to where they would fit into the narrative. It might have made more sense to put them in that context rather than on the back-end of Disc 2. They were very much in keeping with the overall gentle vibe but felt a little bit like ‘deleted scenes’ which I guess, in a way, they were.
There are also three very brief promos advertising the series on Japanese TV on its original airing.

Overall, a really great anime and one will certainly bear repeated viewing. (I know Jitendar is watching his set again in honour of this UK release). And having raised two daughters of my own you can have it on some authority that it really does reflect some of the universal realities that go with that. Despite it being a bit niche, and not at all populist, it’s a very worthwhile addition to anyone’s collection and thoroughly recommended.