DVD
Children Of Paradise (US) 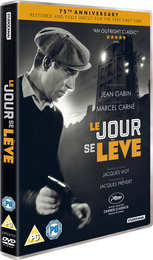 Synopsis:
Set in a five-story guesthouse in the middle of a Parisian working class neighbourhood, LE JOUR SE LÈVE opens on the top floor of the building with shouts and a gunshot. A door opens and the body of a man tumbles down the stairs. As the police start to besiege the building and a crowd gathers, the killer, François (Jean Gabin; La Grande Illusion, Le Quai des Brumes), flees the crime scene and locks himself in his room. After unsuccessfully failing to shoot their way into his room the police climb on top of the roof, and François, starts to recall previous events… His love for Françoise (Jacqueline Laurent; Le vie del peccato, Dawn Over France), the beautiful florist, and her love for Valentin (Jules Berry; The Crime of M Lange, Parade en 7 nuits), the attractive dog trainer. Also starring the renowned Arletty (Hotel du Nord, Thunder Over Paris) as Clara, Valentin’s assistant and suggested lover.
LE JOUR SE LÈVE is celebrated for its use of poetic realism, a popular and influential cinematic style that emerged during the 1930s. By cleverly interweaving bleak, proto-noir art direction and lighting, the film brings to life the social conditions of its working class characters.
LE JOUR SE LÈVE is also widely regarded as a game changer in the world of French cinema due to its use of flashbacks - the first French film with sound to use flashbacks as a narrative device.
Now regarded as one of the best French films ever made, on its original release the Vichy Regime demanded that scenes be cut from LE JOUR SE LÈVE and then they later banned the film altogether. Following the restoration process in collaboration with STUDIOCANAL and ÉCLAIR it was also revealed that the Vichy censors had also forced Carné to modify the opening credits by removing the names of two Jewish cast members, Curt Courant and Alexandre Trauner, due to political tensions at the time.