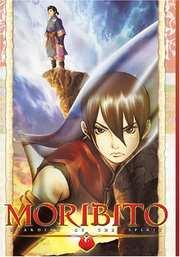 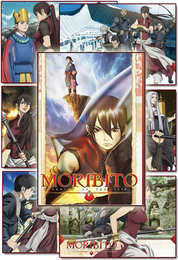 Review for Moribito: Guardian Of The Spirit - Jewelcase DVD Collection

This has turned out to be an odd double dip for me. I reviewed the UK MVM release of this title a few years ago, and fell in love with the show, a deliberately paced, and character focused, fantasy tale from the director of Ghost in the Shell: Stand Alone Complex and Eden of the East, Kenji Kamiyama. But Moribito was one of the last anime titles released here to get an NTSC-PAL standards conversion, and the one it received was uncomplimentary to the show, excessively soft, and prone to motion blur. It was released in the US by Media Blasters, after the original licensor, Geneon shut up shop after localising and dubbing the show, but before they could release it, and Media Blasters gave it the full premium treatment. Again, one of the last shows to be released in single volume format, eight in total for this 26 episode series. That didn’t work for Media Blasters, so they stopped halfway through and switched to, two volume double releases. Then they re-released it in boxset format, and re-released it again. And then they released it on Blu-ray, Region Free to boot. 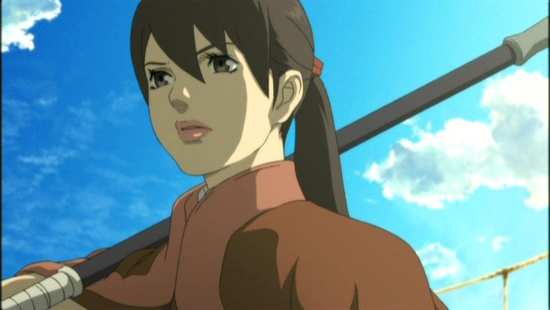 That begs the question of why I didn’t pick it up on Blu, but when fans first received the discs, and started putting up screencaps complaining that it looked worse than the DVDs, full of compression artefacts, and exhibiting interlacing, I certainly wasn’t inspired to get the Blu-ray. And now that Media Blasters is circling the drain, and Viz Media have picked up Moribito for Blu-ray, finally releasing it as progressive and with a worthy transfer, I find that it is Region A locked, and stripped of the songs and signs subtitle track, with the subtitles locked during playback, I have even less reason to buy it. Of course the real reason I went for the DVDs in this case is because I found Media Blaster’s first Moribito Boxset, which collects 8 discs in super-jewel cases no less, cut down from a ridiculous $209.94 RRP to $15. That’s a price not to be sniffed at. 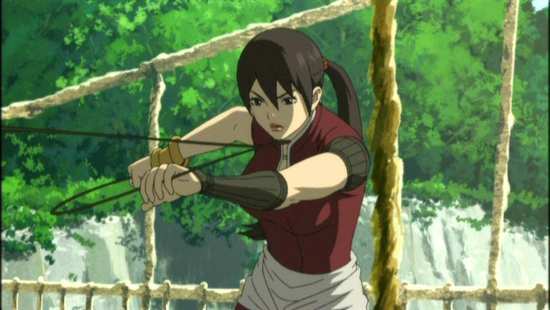 Arriving in Yogo after two years away, the spear-woman Balsa has nothing on her mind but getting her spear repaired. She certainly doesn’t expect to rescue a young prince who has been thrown into a raging torrent. The prince’s mother invites her to the palace to thank her, but it’s more to lay a burden upon her than to endow her with riches. Prince Chagum has been possessed by a water demon, at least that is the opinion of those who know of his nightmares, and it’s the Mikado’s duty to rid the land of water demons. So it is that Chagum’s father has ordered his death. The second Queen pleads with Balsa to take her son and keep him safe. It’s a good thing that Balsa has a self-appointed mission to save eight souls. If she can protect Chagum, that will be the eighth soul. 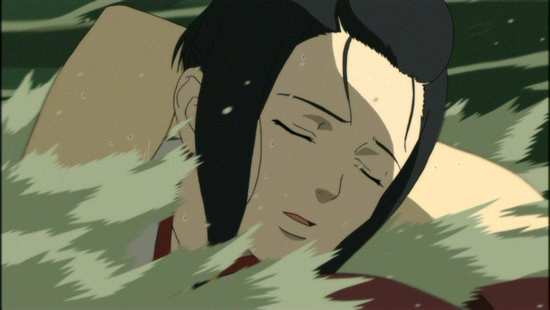 The palace is set ablaze as the perfect cover for an escape, but there are those in the court who are too shrewd to fall for such a ruse. The populace may be kept appeased by announcing the prince’s death, but there’s still the matter of establishing it as fact, so seekers are sent in pursuit. Balsa and Chagum have to find shelter in the town with a couple of Balsa’s friends, Toya and Saya, and they also find help from a herbalist named Tanda. Hiding in plain sight, Balsa goes about raising Chagum as a common member of society, but the water demon’s egg that is gestating in Chagum hasn’t finished with him yet. Also, looking after Chagum reminds Balsa of her own past. Meanwhile, there are those in the royal court who realise that with the ‘death’ of Chagum, the ill omen that lies over the land hasn’t lifted as yet. The great drought is still imminent, as two worlds draw ever closer together. 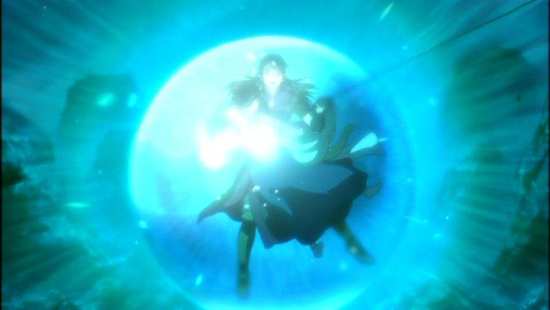 Volume 2: From Prince to Peasant
5. Secret Plan, The Blue Hand
6. To Die in the Misty Blue
7. Chagum’s Resolve

Volume 4: The Tiger’s Intuition
11. Flower Wine For Tanda
12. The Summer Solstice Festival
13. Neither Human nor Tiger 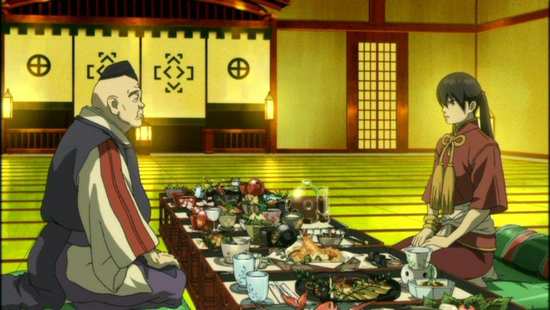 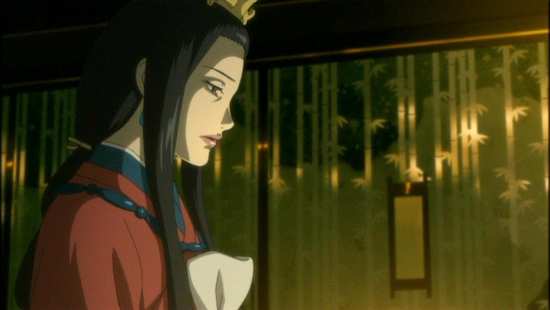 You get a 1.78:1 anamorphic NTSC transfer here. The image is clear and sharp throughout, and you have none of the ghosting and blended frames that made the UK release so visually mediocre. It’s not a progressive transfer, or if it is, it hasn’t been accomplished that well, as there’s a frame of jerkiness during most scene transitions if you try watching it at 24fps. There’s no problem watching the show at 60Hz though. Moribito is a rich, lush and vibrant show, with a gorgeous palette of colours, and a constantly high frame rate. The character designs are distinctive and memorable, while the emphasis on conveying emotion through subtle animation is astounding. There is so much detail here; a raised eyebrow, pursed lips, half a smile, it all comes across clearly. As much as the voice actors, the animated characters here are performing as well. It's also a very dynamic anime, there's always some aspect of motion, some energy to the scene. The action scenes in particular are spectacular. When Balsa wields her spear, you might be tempted to watch the scene in slow motion to take all of the action in. It's indicative of a lavish budget, dedicated animators, or both. 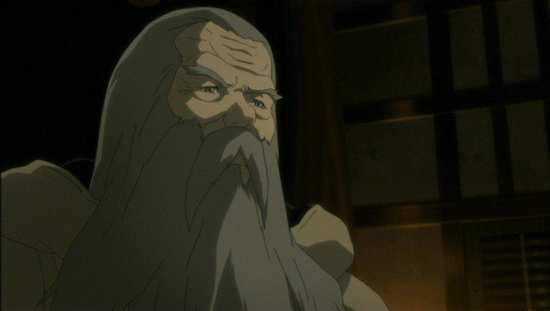 You have the option of DD 5.1 English and Japanese, as well as DD 2.0 English and Japanese, along with translated subtitles and signs. I was very happy with the original language track as always, but from what I sampled of the English dub, it was certainly acceptable, if not remarkable. The dub is a little average for a show of this quality. It certainly isn't up to Ghost In The Shell standards. Particularly jarring is the idiomatic English in a rather fantastic setting. The music is excellent, Kenji Kawai does the honours for the show's score, and it's very much a piece of the story, hard to categorise out of context, while the show's opener from L'Arc en Ciel is just the rousing theme to get you jazzed for another episode. 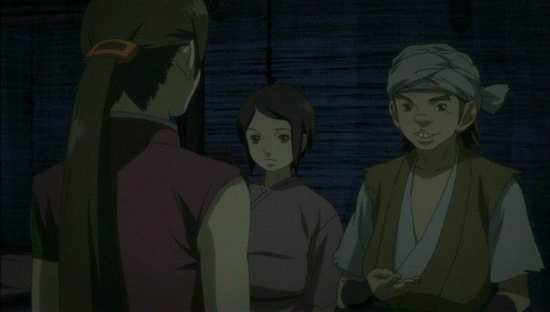 The 5.1 tracks aren’t native to the show; I believe Media Blasters created them by up-mixing the stereo. They’re a little too strident and forced, and there are moments where even voices get a presence in the soundstage, rather than remain confined to the centre channel. However, the 5.1 audio is richer, and fuller than the stereo. My preference is for the 5.1 Japanese track, but downmixed to 2-channel stereo, as it actually sounds clearer than the basic 2.0 stereo track. The subtitles are timed accurately and are free of typographical error. 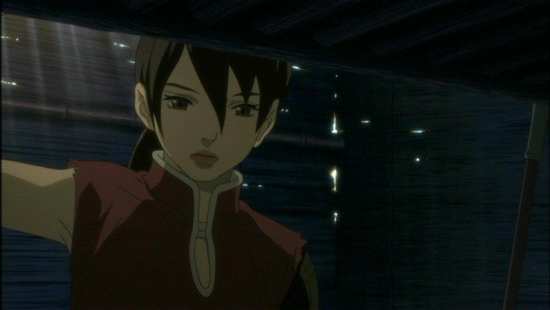 The slip case isn’t much to write about, thin card with some pretty artwork it must be said, even on the inside, but it is very flimsy. What aren’t so flimsy are the eight DVD super-jewel cases inside that contain the discs. It’s my very favourite, if archaic DVD packaging solution, and you begin to realise just why they were asking such an outlandish RRP. Each case has its own artwork, blurb on the back, which proudly proclaims the inclusion of a Production Line Art Booklet. That’s booklet as in the front sleeve of the case opens up into a two page spread of production art, one for each jewel case. I’ve never before folded a piece of paper in half and called it a booklet, but it’s nice to remember for future reference.

There aren’t too many extras on the discs though, although all except volume 6 are dual layer discs. Each one presents its content with static menus, following the usual plethora of Media Blasters logos. 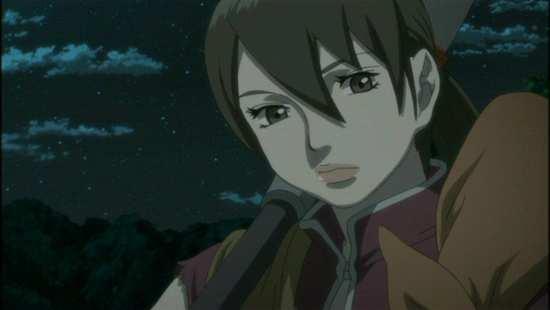 You get the Textless Opening. You also get trailers for Tweeny Witches, Otogi Zoshi, Twelve Kingdoms and the Alteil card game.

You have the Textless Closing, plus trailers for Kujibiki Unbalance, Simoun, Phoenix and Kite Liberator.

You have 3 trailers for Moribito running to 7 minutes in total, a Promo Film lasting 3 minutes, with test imagery for the series, as well as soundbite interviews with the author and the show’s director. Trailers on this disc are for Bludgeoning Angel Dokuro-chan, Magical Witch Punie, Nighthead Genesis, and the Berserk Remastered collection.

All you get here are trailers for Weathering Continent, Twelve Kingdoms, Berserk Remastered, and Blade of the Immortal. 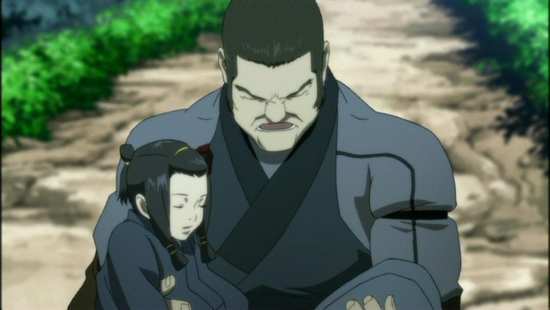 Here you will find trailers for Blade of the Immortal, Otogi Zoshi, Genshiken 2, and Giant Robo.

Just trailers again here, this time for Ah My Goddess, Blade of the Immortal, Gunparade March, and Huntik Secrets and Seekers.

This time you get a 5 minute promo for the series. You also get trailers for Knight Hunters Eternity, Tekkaman Blade, Magic Knight Rayearth, and Ikki Tousen Dragon Destiny.

There are some small but useful extras on this final disc, with a 7 minute Press Conference, with the original author, the staff and the voice cast on stage to talk about the show.

There’s more of this in the Discussion Group, although it mostly focuses on the director Kenji Kamiyama, and the author Nahoko Uehashi, and looks more at the making of the show. This lasts 10 minutes.

Finally there are trailers for Nighthead Genesis, Rurouni Kenshin, Ginrei, and Blame! 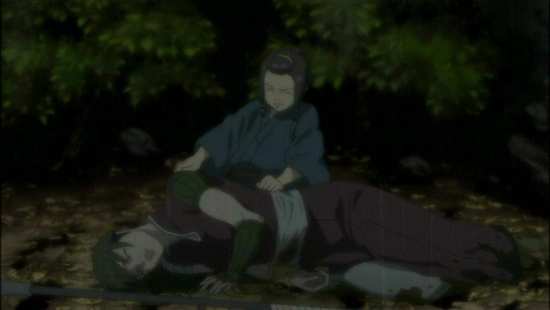 Rather than reiterating my opinion of the show, I’ll just point you in the direction of my reviews for Part 1 and Part 2 of the UK release. But you can bet that if I’m going to double dip on DVD now, when the world is all going Blu-ray, that I really do love this show. Moribito is one of the finest anime shows that I own; indeed it transcends anime, eschewing the usual tropes and clichés, and just delivers one of the finest examples of serialised storytelling that I’ve experienced. It just is peerless. When your main character is a strong, skilled warrior woman, and the show delivers absolutely no fan service or pandering in that regard, you have to realise just how unique this show is in its medium. 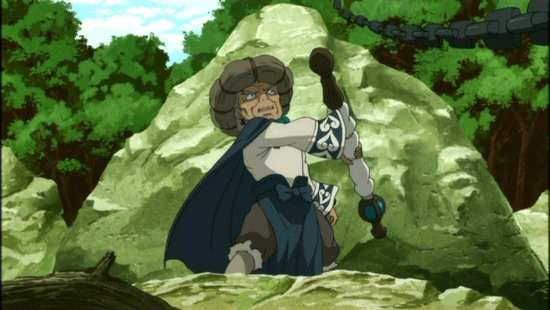 It’s all about the storytelling and the characters. Moribito presents a rich fantasy world, or indeed fantasy worlds, develops a complex and detailed narrative that explores these parallel worlds, an ancient legend and a prophecy, all wrapped up in politics and machinations. But the heart of the story is about a woman bodyguard and the young prince that becomes her charge, and the relationship that develops between them. It’s a story that never fails to entertain, to excite, and to move the viewer emotionally. I loved it the first time I saw it, and I love it even more now that I’ve watched it a few times. It’s the benefit of good storytelling. If you get the basics right, then that’s the 90% of the battle won right there, but with the animation, the production values, and the voice acting, Moribito gets the other 10% perfect as well. 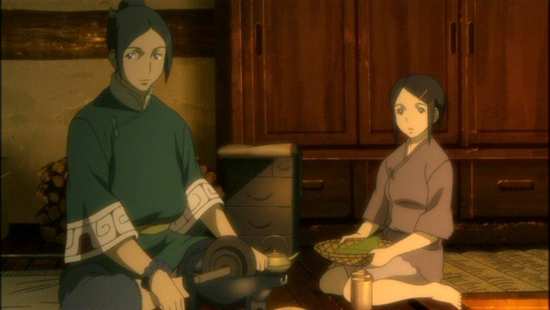 It’s all even better on these US DVDs, which present the show with a degree of clarity that is missing on the UK standards converted discs. The wonderfully imagined worlds of Moribito look sharp and detailed in their native NTSC format, and the end result is a telling improvement. What’s more, contrary to my initial belief, you do indeed get a handful of extras on these discs, voice actor and creator interviews that are really interesting to watch. These US discs are better enough that it’s well worth upgrading the UK release. The flawed Media Blasters Blu-ray will probably be impossible to find now, while the corrected Viz Media Blu-ray is locked to Region A. If, as for me the region lock is a brick wall, then these DVDs are good enough.